Norfolk Council blasted for not gritting after 37 crashes

There were a spate of car crashes the morning after a council sent a ‘gleeful’ tweet about not gritting the roads.

Officials were today left red-faced after police issued an icy roads warning 17 hours after the tweet.

The reference to ‘The Sun Has Got His Hat On’ from the 1985 musical Me and My Girl backfired after temperatures plummeted overnight. 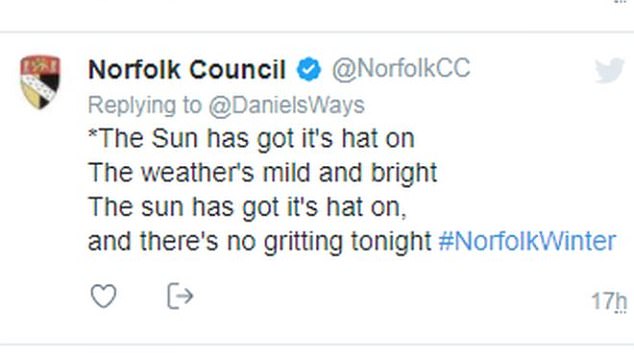 The council apologised to furious motorists who blasted it over the tweet saying road conditions were ‘atrocious’ the following morning.

The embarrassing blunder deepened as Norfolk Police was forced to issue an icy roads alert after receiving 37 reports of road crashes at 9.30am.

The force said on Twitter: ‘Be careful on the roads this morning as they are icy! We have had reports of 37 RTC’s.’

A spokesman for Norfolk Fire Service added crews were called to at least 16 road crashes between 6.23am and 8.58am on mainly rural roads. 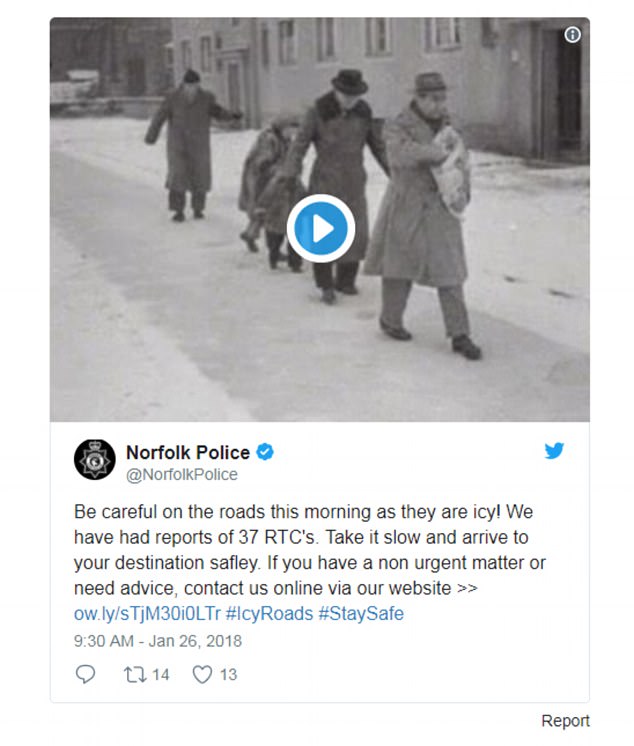 The council the posted ‘an icy roads alert’ on Twitter and a spokesman said its forecaster did not predict the cold snap.

He said: ‘While it’s usually very accurate, the forecast for last night suggested road temperatures would not dip below freezing, so on this occasion we unfortunately didn’t have the information needed to send the gritters out.

‘We’re sorry if this meant that some people experienced difficult journeys this morning.’

It is understood none of the crashes involved serious injuries but many said its weather warning was ‘too late’ and reported seeing vehicles that had careered off the road.

Jo Woods replied: ‘Tell us about it! My husband’s just driven to Wells from Briston, via Fakenham, and saw three cars off the road in fields.

‘Clearly the roads haven’t been gritted, not even the main roads – shocking.’

Another woman on Facebook said: ‘A bit embarrassing given your gleeful tweet yesterday about not having to grit last night.