North and South Korea have symbolically joined their railway networks together as they begin work to reconnect transport networks between the two countries.

But construction on the project cannot actually begin because of international sanctions banning the import of metals and energy products into North Korea.

Instead, engineers from the North and South – which are still technically at war – will spend the next two years conducting joint surveys and doing design work. 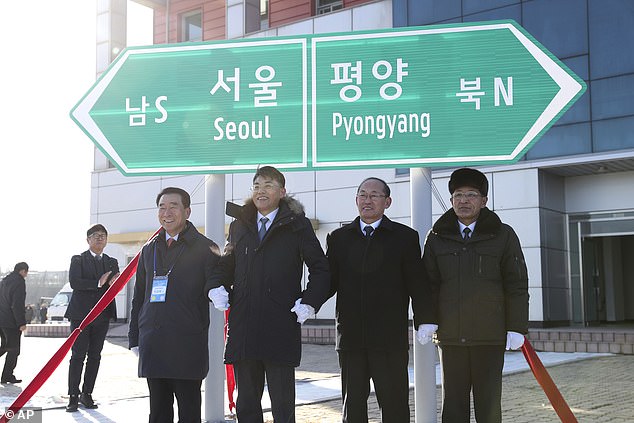 The groundbreaking ceremony took place in the border town of Kaesong, in North Korea, but actual construction cannot start because of sanctions against Pyongyang

The groundbreaking ceremony was held at Panmun Station in the border city of  Kaesong on Wednesday.

A train full of 100 South Korean government officials, ministers and family members displaced by the Korean War was driven to the station for the event.

They were in turn greeted by a 100-strong North Korean delegation, as well as officials from the United Nations, China, Russia and Mongolia – amid wider plans to link North Korea with the trans-Siberia and trans-China railways.

But, underlining the scale of the challenges facing the project, even getting a train to Panmun required South Korea to obtain a permit from the UN Security Council.

Kim Yun Hyok, the North Korean vice railways minister, said the Koreas should push further with engagement instead of ‘wobbling on the path while listening to what others think,’ designed as a rebuke to Seoul over its close ties with America.

North Korea has repeatedly voiced displeasure about the slow progress in the reconciliatory projects agreed between their leaders. 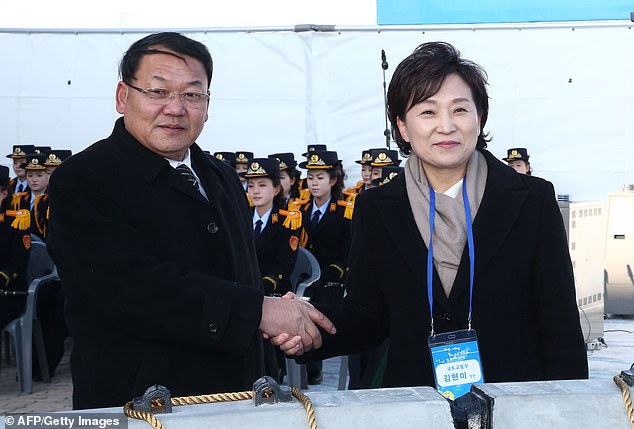 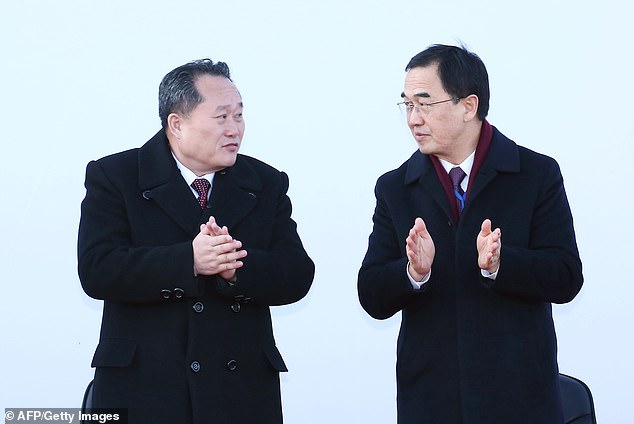 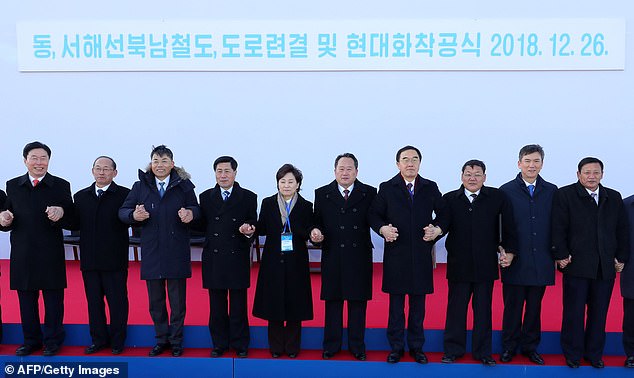 Around 100 South Korea officials met with a similarly sized North Korean delegation at Panmun Station, in the town of Kaesong, for the ceremony

The Seoul government plans to conduct further surveys on North Korean railways and roads before drawing up a detailed blueprint for the project.

Actual construction will proceed depending on the progress in the North’s denuclearization and the state of sanctions against the country, the ministry said.

‘We plan to hold detailed negotiations with the North to coordinate on the specific levels we want to achieve in the modernization of railways and roads and how to carry out the project,’ said Eugene Lee, the ministry’s spokeswoman.

South Korea has set aside some $600,000 for the project, but experts say the North’s transport infrastructure is so dilapidated that it could take decades and absorb billions of dollars to modernise.

South Korean President Moon Jae-in agreed to the ceremony during a September summit in Pyongyang with North Korean leader Kim Jong Un as a step toward joint industrial zones and reconnecting transport links. 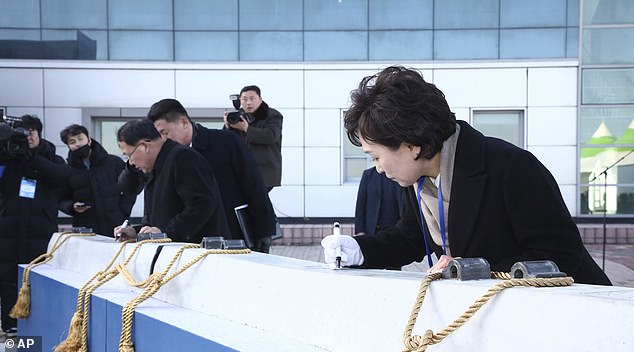 South and North Korean officials sign a concrete railway tie during the ceremony. The countries will now conduct surveys and design work since construction cannot start 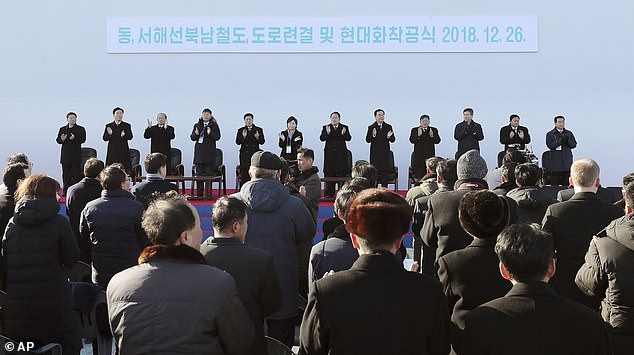 The North and South Korean delegation were watched by families displaced by the Korean war along with officials from China, Russia and Mongolia 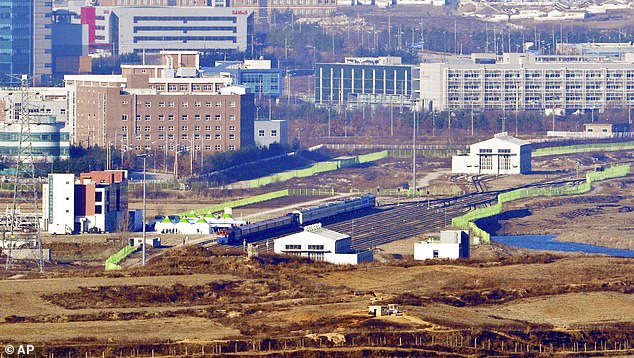 It is another example of the thaw in relations between the Koreas, which began at the Winter Olympics and saw Kim Jong Un and Moon Jae-in holding hands while listening to K-Pop together.

The same thawing also saw American President Donald Trump meet with Kim in Singapore for the first ever summit between the two countries.

Trump let the summit full of admiration for Kim and certain he had achieved concrete steps towards ‘denuclearising’ the North, but progress has stalled over what that word actually means.

Pyongyang insists that it has taken several concrete steps towards winding down its nuclear weapons program, such as destroying the underground Punggye-ri testing site, and that it is time for America to reciprocate by lifting sanctions.

However, Washington is insisting that North Korea give up its entire nuclear arsenal first before sanctions are lifted later – an idea that Pyongyang has balked at.

A second summit between Trump and Kim is scheduled to take place in Washington sometime early next year, which the US leader has said he is ‘looking forward’ to.