Chicagoans and Houstonians are embroiled in a cultural war over the perceived copycatting of Chicago’s iconic ‘Bean’ statue.

The fight between residents of America’s third and fourth largest cities — Chicago and Houston, respectively — kicked off on Tuesday when Chicago Tribune columnist Kim Janssen wrote a story titled ‘Unoriginal 4th place Houston gets its own bean sculpture… whatever.’ 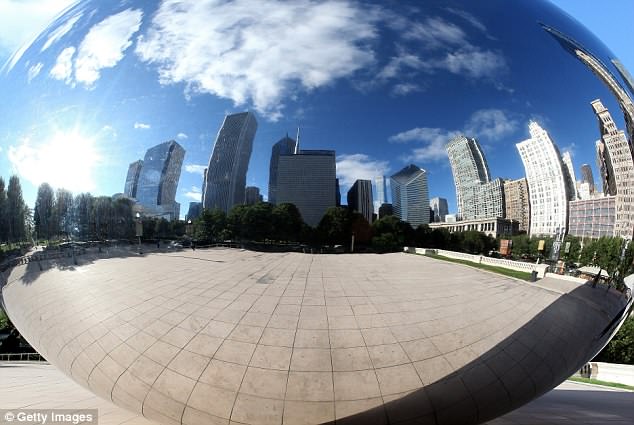 Chicago’s ‘Cloud Gate,’ AKA ‘The Bean,’ has been a tourist attraction since 2006

Houston’s 21,000-pound sculpture, Janssen pointed out in his Chicago Tribune column, is ‘er, in the shape of a bean, just like the Millennium Park icon. And it’s shiny and made of stainless steel.’

‘Wherever did they get that idea?’ he sneered.

The 22,000-pound, Kapoor-designed sculpture, ‘Cloud Gate’ — affectionately nicknamed ‘The Bean’ — has been a Chicago tourist attraction since its 2006 unveiling.

Janssen then went on to mock the Texas city’s ‘version of ‘The Bean’ as being ‘uptight,’ due to its vertical placement, whereas the ‘chill Illinois bean’ is horizontally-oriented.

Adding insult to injury, Janssen then wrote, ‘If being surrounded by a cultureless abyss insufficiently communicates to confused tourists that they are in Houston, the bean’s verticality will therefore act as an additional reminder of their poor life choices.’ 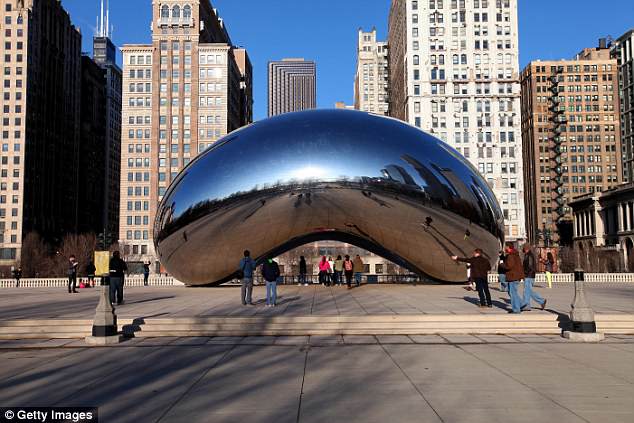 Houston Chronicle’s senior digital editor Lisa Gray took umbrage at Janssen’s column and apparently fired off an email to him.

‘Is Chicago feeling defensive? How bad is it there, knowing that Houston is set to pass you in population, taking your spot as third-largest city in the US? Are you feeling—well, to steal someone’s joke from Twitter—like a “has-bean?”‘ Gray wrote in her email.

Janssen, who noted in his column that Houston’s statue was created in 2000, then emailed, ‘It’s a leftover bean, a second-rate bean that’s been lying around in storage for the better part of 20 years, because nobody else wanted it. Nobody except Houston wants a leftover, second-rate bean.’

Gray and Janssen’s flurry of emails — and mutual hometown insults — wound up being printed in the Houston Chronicle on Wednesday, with the headline, ‘Dear Chicago: Houston’s bean is better. And so is Houston.’

The original column and resulting email spat spilled over into the hoi polloi, with residents of both cities taking to social media to hurl insults at the other city’s denizens and statutes. 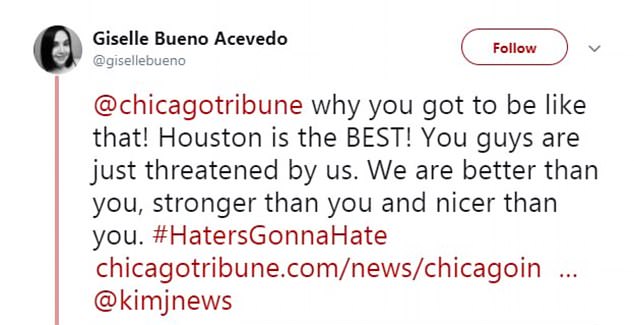 Another Chicagoan tweeted, ‘Wanting to live in Houston is like wanting to eat dinner in Applebee’s.’

Meanwhile, a Houstonian wrote, ‘i feel great rage at this article they called houston a CULTURELESS ABYSS i am ready to fight everyone from chicago.’

‘why you got to be like that! Houston is the BEST! You guys are just threatened by us. We are better than you, stronger than you and nicer than you,’ a Houstonian wrote.

And another Houstonian tweeted, on behalf of his city, ‘Hey Chicago… f**k you,’ and signed it ‘Houston, Texas.’

Janssen’s Bean-induced ire, he revealed in both his column and subsequent emails, was related to the fact that ‘The president never has anything nice, or accurate, to say about us. Our state is broke, and people are leaving.’

He pointed out that Houston’s population growth — gaining 94,417 residents in 2017, versus Chicago’s loss of 13,286 residents — puts the Texas city on the path of overtaking Chicago as America’s third-largest city within the next decade.