Canberra enforcer Josh Papalii has revealed it took a brutally honest chat with his Queensland Maroons coach Billy Slater to help him re-find top form and play a starring role in guiding the underdog Raiders to surprising finals success.

Papalii came under intense scrutiny when he played just 26 minutes in Queensland’s 44-12 flogging by NSW in game two of this year’s State of Origin series, carrying the ball five times for just 37 metres despite starting in the front row.

The drums started beating for the Raiders forward, with plenty of fans and analysts calling for him to be dropped for game three.

When the Maroons went into camp on the Gold Coast ahead of the series decider, Papalii decided to nip the talk in the bud.

He marched into coach Billy Slater’s room and asked him directly: ‘Do I still have your support?’

Slater responded with a firm yes and the conversation they had would not only inspire Papalii to carve out a huge role in the Maroons’ series win at Suncorp Stadium, but also the Raiders’ late-season charge into the NRL finals.

Against the Storm in the first week of the finals, Papalii had 16 carries for 168 metres including 43 post-contact metres, a staggering nine tackle breaks, 29 tackles and an offload.

Now, with the Raiders set to face Parramatta at Bankwest Stadium for a place in the preliminary final against Penrith, Papalii has reflected on the barrage of negativity he copped in July.

‘Obviously it hurt a little bit,’ he told News Corp.

‘I didn’t see too much. I deleted social media every time I went into Origin camp, especially the last one. I went up to Slats before game three – the first day of camp – and I said if I am not the right man to be in the team, I am more than happy for you to choose someone else.

‘The confidence I got from Slats telling me he wants me in the team and he knows what I bring, that gave me more confidence to play my game.

‘There are going to be critics out there whether you play good or not. Fans be fans, commentators be commentators.

‘Everyone who watches this game is always going to have an opinion, whether that is good it doesn’t make a difference to me.

‘I feel like as a front rower I can do things many front rowers can’t do. I thought it was time to go and approach Billy. What he said to me gave me confidence that I belonged.’

Slater said the heart-to-heart was a way to re-inspire his star prop and help him become leader of the pack once again.

‘I just reinforced how much he means to the Queensland State of Origin team and the impact he has amongst, especially the forwards,’ he said. 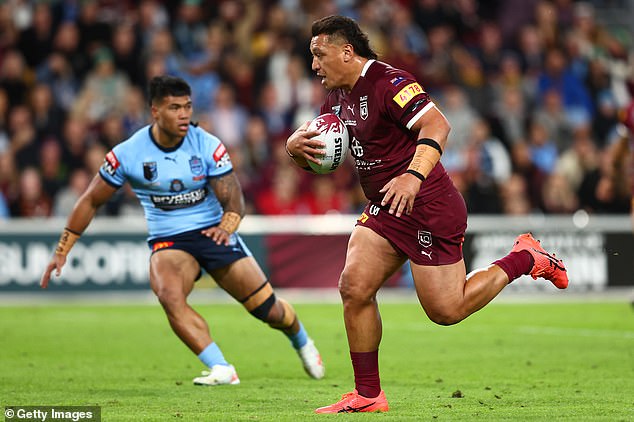 ‘He is our leader. The impact he has with everyone else is as important as the actions he has on the field. I just reinforced that with him.

‘He is playing exceptional. The fact their forward pack has thrived in the last little period has helped him, but at the same time if you spoke to Joseph Tapine and those guys, they would credit Josh as well.

‘His second stint against Melbourne on Saturday afternoon was exceptional. He is playing some good footy at the moment. It is a testament to him to play the way he did for us and then go on and lead his team into the second week of the finals.’