The number of homes being built in England fell in the last three months of 2021, piling further pressure on the nation’s housing shortage.

Fresh figures from the Office for National Statistics and the Department for Levelling Up, Housing and Communities show the number of dwellings where building work commenced on site during the period was down 3 per cent on the previous quarter.

Based on building control inspections, there were 41,600 new-builds underway in October to December 2021, a 3 per cent decline on the same point a year earlier.

Stats: The number of homes being built in England fell in the last three months of 2021

The number of completed new-build properties was 41,330 over the three months, which is 4 per cent lower when compared to the previous quarter, and 11 per lower against the same quarter a year ago.

Toby Fields, a director at Langley House Mortgages, said the data was ‘damning’ and a ‘huge sucker punch for buyers’.

Concerns are mounting that the lack of new-builds being completed is continuing to drive up property prices and hampering the Government’s ‘levelling up agenda’.

While the number of new homes being built in England has been dwindling, fresh listings at estate agents for all types of properties have also remained stubbornly low over the past couple of years; but they have, in some locations, started to show signs of improvement in the last few weeks.

In the most sought after locations, homes are being snapped up rapidly after being listed, with only the most organised buyers in with a chance of bagging the property of their dreams.

Mr Fields, said: ‘The lack of supply of houses is causing astounding competition for each property on the market and therefore driving prices up. 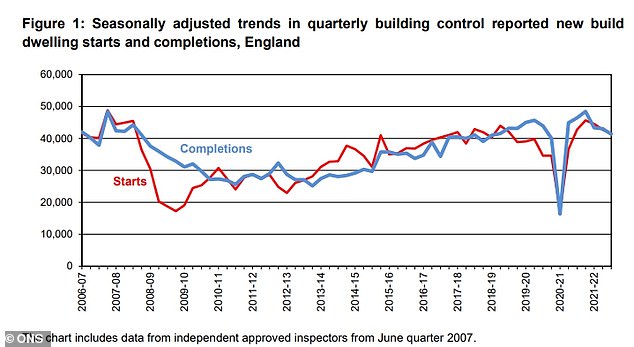 ‘We are hearing from local estate agents that there are at least 25 buyers per property and buyers are desperate to purchase, offering hugely over the asking price, some without even viewing the property.

‘With more and more deposits coming from the Bank of Mum and Dad, some buyers will have much more leeway if a higher deposit is needed, again allowing more competition and higher prices.

‘Until we are building more houses, I cannot see property prices plateauing.’

In total there were 61,119 new dwelling EPCs lodged in England in the quarter ending December 2021, representing a 6 per cent drop against the same period a year ago.

The report said there was an net increase of 201,850 in the number of domestic properties with a council tax band in England between April 2020 and March 2021. But, this hike was 17 per cent lower than that seen in the same period the year before. 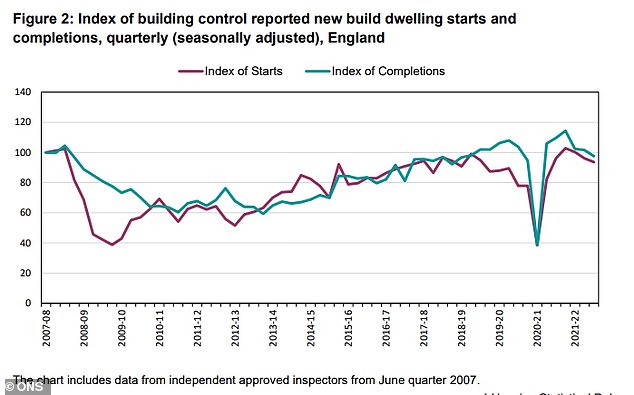 On the new-build figures, Lewis Shaw, founder and mortgage expert at Shaw Financial Services said: ‘This data perfectly illustrates why our property market is defying all expectations with double digit house price growth.

‘Our property market is firing on all cylinders purely because of a lack of supply causing an imbalance and forcing prices higher, not because we’ve got a growing economy.

‘The reality is that house prices will likely keep rising until we fix the structural issue and build more quality homes faster.

‘It will be fascinating if house prices continue to rise as we enter our spring, summer and winter of discontent and the seemingly inevitable recession.’ 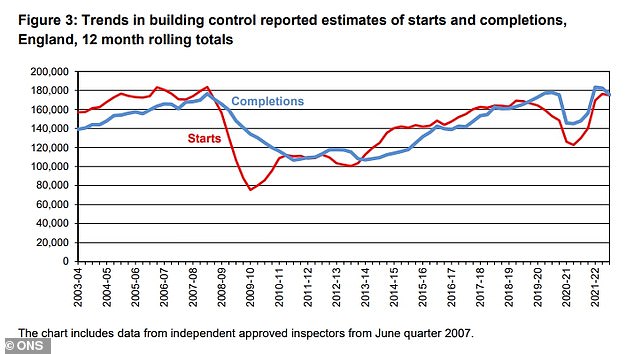 ‘As long as demand continues to outstrip supply and until the planning process is looked at in detail to speed up the process for small and large developers, this massive imbalance will continue.’

In his election manifesto, Boris Johnson pledged to build 300,000 new houses a year across the country by the mid-2020s. Recent Government data also suggests there are around 238,306 properties that have been sitting empty for more than six months in the UK.

In total, however, the number of vacant properties stands at over 600,000 across the country, according to the figures.

Today’s report from the ONS and the Government says annual new build dwelling completions in England generally increased from 2003 to 2004 until the end of 2007.