An Australian nutritionist has revealed why prosecco leaves you with a worse  hangover, involving stronger waves of nausea, drier mouth and a more intensely pounding headache, than any other alcohol.

The answer lies in the bubbles, according to Sydney dietitian Lee Holmes, who says the carbon dioxide carried in the ‘fizz’ of sparkling wine causes alcohol to absorb faster and deeper into the bloodstream.

The cookbook author told Daily Mail Australia that higher blood alcohol levels cause more severe inflammation of the brain, which is the reason drinkers experience crippling hangover symptoms like fatigue, vomiting and migraines the morning after.

Studies show over two thirds of people get drunker faster when they drink prosecco, Champagne or other sparkling wines compared with other alcohol.

‘When you drink, alcohol is absorbed through cell membranes which line the gastrointestinal tract, moving into blood capillaries until it enters the bloodstream,’ she said.

The faster the rate of absorption, the higher the blood alcohol level will be, which determines the intensity of a hangover the next day. 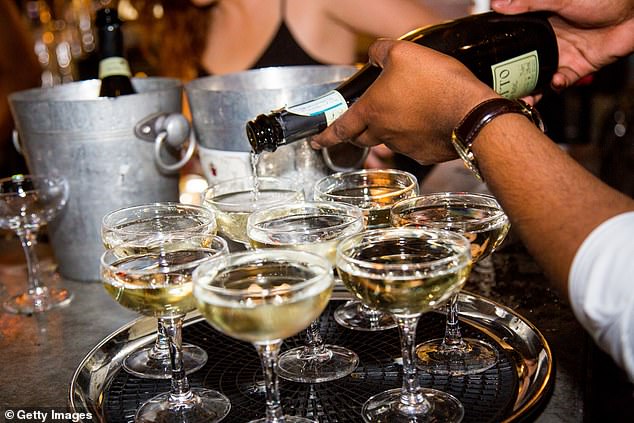 ‘Hangovers are caused by two things. The first is inflammation of the brain, and the second is the brain’s overcompensation due to the depressant mechanism of alcohol,’ she said.

‘Because prosecco is absorbed faster than other drinks, it leads to more severe hangover symptoms the next day, such as headaches, gripping nausea, increased sensitivity to light, gritty eyes and an extremely dry mouth.’

But Ms Holmes said the intensity of a hangover also comes down to the quantity of alcohol consumed.

1. Space out your drinks – ‘Sip and savour the flavour! You’ll end up drinking less and enjoying it more.’

2. Three is enough – ‘Follow the three limit rule and stop after your third drink.’

3. Set goals before heading out – ‘Pre-plan your alcohol consumption. That way, you are more likely to stick to what you’ve planned.’

4. Set clear boundaries – ‘Tell your friends you are watching your alcohol intake, and don’t feel obligated to keep drinking with them if you want to drink mindfully. Mindful drinking is all about drinking while thinking!’

5. Think about tomorrow – ‘Remember everything you want to do the next day and what things a hangover would prevent you from doing. This will help you stay on track if you know you have things you need to do.’

6. Sharing is caring – ‘Share a bottle with friends – you don’t need to polish a whole one off on your own!’

7. Remember your power – ‘You don’t have to drink if you don’t want to. You always have a choice.

Brain: Drinking too much can affect your concentration, judgement, mood and memory. It increases your risk of having a stroke and developing dementia.

Heart: Heavy drinking increases your blood pressure and can lead to heart damage and heart attacks.

Stomach: Drinking even one to two standard drinks a day increases your risk of stomach and bowel cancer, as well as stomach ulcers.

Drinking water between glasses will alleviate the severity of adverse side effects by automatically reducing the volume you drink.

‘If you find prosecco or Champagne go straight to your head, pace yourself and remember to stay hydrated by drinking water between drinks,’ she said.

‘Another way to avoid going from ‘fizzy to dizzy’ is to ensure you eat beforehand to line your stomach against alcohol.’