If you’re dieting and the craving for something on the banned list hits, it can be all too easy to ditch your healthy resolve.

But according to Australian nutritionist Jessica Sepel, a little indulgence isn’t an altogether bad thing and there’s a way to enjoy alternatives without the calories.

In a recent post on her website, Jessica explained one of the benefits of eating a clean diet is that your taste buds adapt and before long you will naturally crave foods that are lower in fat and refined sugar.

Here, the clean-eating nutritionist reveals 10 simple food swaps for pasta, pizza, chocolate and indulgent ice cream and shares some of her best-loved recipes.

Who doesn’t love a pizza laden with cheese and their favourite toppings?

It’s a treat Jessica doesn’t believe should be banned and instead offers an alternative made from a cauliflower base.

And before you think this swap is a flavourless alternative, finely crumbed cauliflower, which has been steamed, then mixed with an egg and flour bakes really well (for extra flavour, Jessica adds a handful of mozzarella).

Once the based has been prepared, add toppings of your choice. 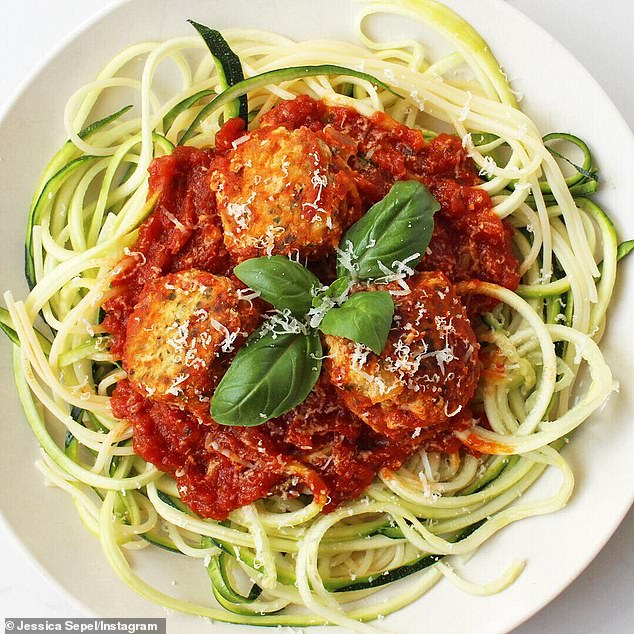 If you’re craving the comfort of pasta, but don’t want the extra calories, swapping with zoodles is not only tasty but also much lower in calories

There’s nothing more comforting than a bowl of pasta topped with sauce and Parmesan cheese. 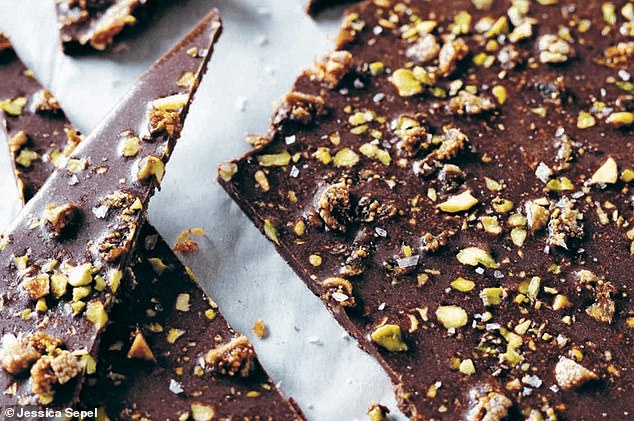 It’s hard to believe chocolate that looks this good could be healthy and while Jessica’s swap is a decadent treat, it’s also sugar-free

A few pieces of chocolate makes for a perfect meal ending, but there aren’t all that many healthy options available.

Instead, Jessica suggests making your own and offers her recipe for incredibly delicious fig and pistachio bark.

Melt the coconut oil in a medium saucepan over medium heat. Reduce the heat to low and whisk in the cacao powder, tahini and sweetener of choice. Whisking constantly to stop any lumps forming. Stir in the cinnamon and salt, then remove from the heat.

Set the pan aside for about 5 minutes so the mixture cools slightly and begins to set.

Pour the mixture evenly onto the baking paper.

Scatter the pistachios and figs over the chocolate mixture and finish with a sprinkle of extra cinnamon if you wish.

Cover with plastic film and put it in the freezer for 30- 40 minutes or until set firm.

If you love the taste of hot chocolate, then this swap is sure to please.

Not only is the treat a tasty alternative, but it’s one Jessica calls her ‘perfect sleepy time tonic’.

Her creamy warm almond milk uses a blend of ingredients, including almonds, maca powder and cacao as well as dates, nutmeg and cinnamon for flavour. 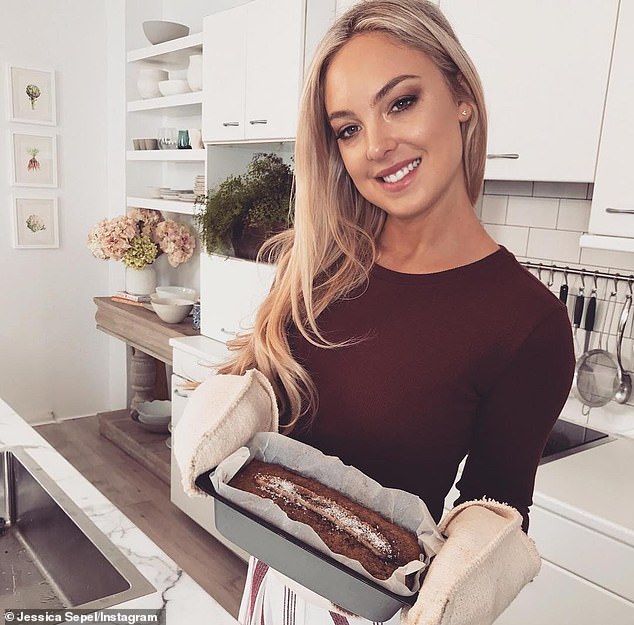 Given Jessica lives by a mantra of everything in moderation, it should come as no surprise there’s an alternative to brownies – but one that’s sure to please.

The nutritionist offers a recipe made from real chocolate and raspberries and comes swirled with peanut butter for extra taste.

In a large bowl, beat the eggs until combined. Then add the coconut flour and raw cacao powder. Stir to combine.

Spoon the mixture evenly into the baking tin. Top with dollops of extra peanut butter and then run a knife through the dollops to create a swirl.

Bake in the oven for 25–30 minutes, or until you insert a skewer and it comes out clean.

Remove the brownie from the oven and allow to cool slightly. Once slightly cooled, cut into brownie squares. Serve warm.

The nutritionist, whose new app JSHealth is the perfect resource for those wanting recipes and health guidance, reveals nice-cream is her ice cream go-to when she is craving a dessert treat.

And she reveals creating the indulgence couldn’t be easier either.

Simply blend frozen bananas with tahini, sea salt, almond milk, cinnamon, maple syrup (if using) and cinnamon in a food processor until the consistency is like ice cream.

‘Healthy indulgence at its best!’ she said. 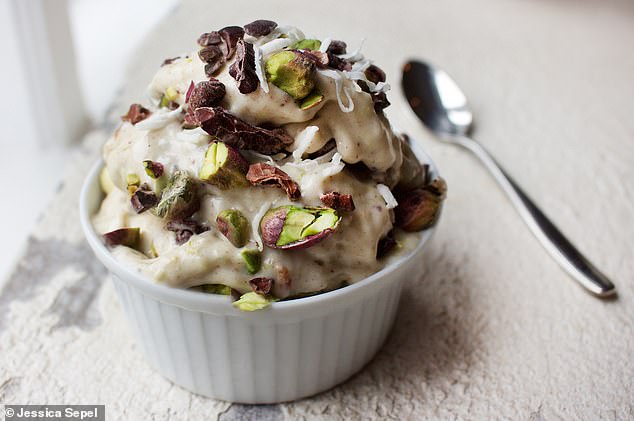 Healthy indulgence at its best! Nice-cream made by blending frozen bananas is a great alternative to ice-cream

Popcorn is a great alternative to chips or other snacks but some varieties can come laden with fat, salt and other flavourings.

Jessica’s recommendation is to swap standard popcorn for natural popcorn. You can either buy this pre-prepared from the supermarket or when making your own ditch butter for olive oil or coconut oil. 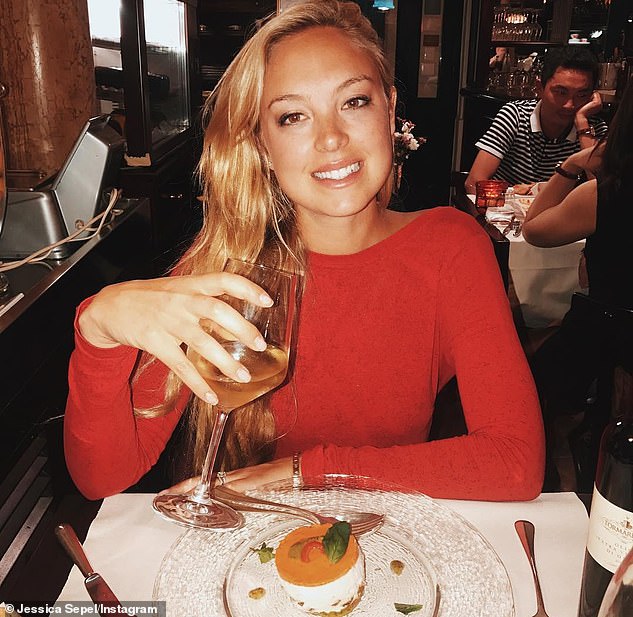 8. Swap alcohol and wine for spritzers and organic alternatives

If you’re watching your weight, alcohol tends to be something you won’t want to indulge in as it can come with laden with extra calories. 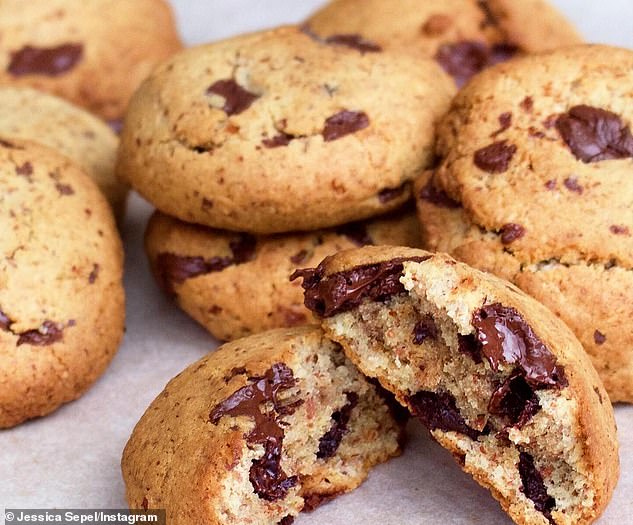 With advances in vegan cuisine, it’s now possible to create dishes that not only taste as good as non-vegan but in some cases taste even better.

Jessica’s vegan peanut butter choc-chip cookies definitely fall into this category, with the nutritionist saying you’d never know something so decadent could be packed with such good-for-you ingredients.

Add all ingredients to a food processor, except for the chopped chocolate, and process until it comes together – the mixture should be sticky enough to hold its shape when pressed. If it’s too dry, add a touch more water.

Add chopped chocolate and stir through.

Spoon 1 tbsp of mixture onto a lined baking tray and shape into a cookie.

Bake for 12-15 minutes, until golden around the edges. 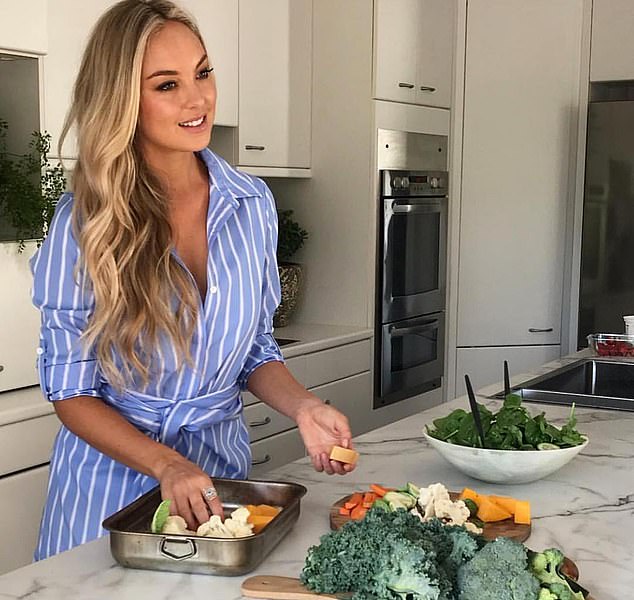 10. Swap chips and dip for kale chips and home-made dips

Chips and dip, while always a tasty snack, can lead to total calorie blow-out, especially as sort of snacks tend to be enjoyed at social events.

If you are hosting such an occasion and would like to indulge, consider kale chips and home-made dips as a healthier, yet flavoursome alternative.

Kale chips simple to prepare and generally take no longer than 15 minutes in the oven to bake.

Don’t forget to add your favourite spices, turmeric, cajun, cumin ahead of cooking.