Obese patients with an infectious disease survive are twice as likely to survive, study finds.

Overweight or obese patients discharged from hospital after being treated for a serious infectious disease are about twice as likely to survive compared to those who have normal weight, new research shows.

The counter-intuitive finding – which appears to support a controversial phenomenon known as the obesity paradox – was based on a study of patients in Denmark.

A team led by Sigrid Gribsholt of Aarhus University Hospital studied more than 18,000 patients who had been admitted to a hospital in central Denmark with acute conditions related to infectious disease.

Overweight or obese patients discharged from hospital after being treated for a serious infectious disease are about twice as likely to survive compared to those who have normal weight, new research shows

They examined the risk of death within 90 days after discharge in three groups – underweight, overweight and obese patients. A group of normal weight patients served as a comparison group.

‘Overweight and obesity were associated with substantially reduced 90 day mortality following incident hospital admission for infection,’ the authors concluded in an abstract of their study presented at this year’s European Congress on Obesity in Vienna, Austria.

The obesity paradox is controversial but past research provides some evidence for it. 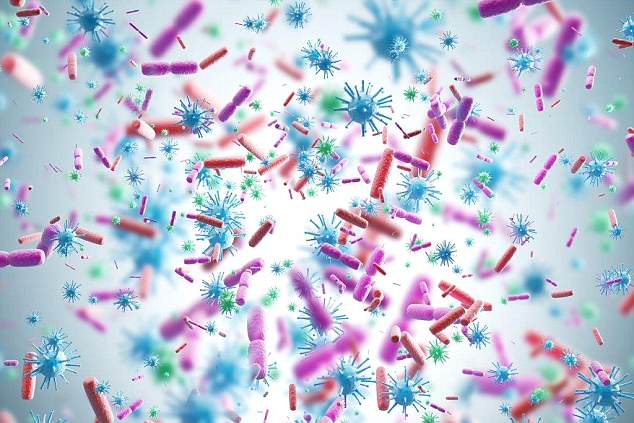 ARE OBESE PEOPLE LESS LIKELY TO DIE FROM SEPSIS OR PNEUMONIA?

People who are obese or overweight are up to 30 per cent less likely to die from pneumonia, a study by Taipei Medical University Hospital, Taiwan, and John PeterSmith Hospital, Texas, found in May 2018.

Among people hospitalised with the inflammatory lung condition, those carrying too much weight are 20-to-30 per cent less likely to pass away.

A similar study by the same researchers, also released in May, found obese people are 22 per cent more likely to survive sepsis.

They are also less at risk of being readmitted to hospital within 30 days of their discharge.

It is unclear exactly why carrying too much weight protects against such infections.

One theory is overweight people have more inflammatory signals that support their immune-system function, helping to fight infections.

The researchers analysed all patients who were hospitalised in the US between 2013 and 2014 with either pneumonia or sepsis.

The patients’ BMIs were calculated, along with 30-day mortality rates.

Both of the studies’ findings were presented at the European Congress for Obesity in Vienna.

Counter-intuitive finding is backed up by some evidence

For example, in people with heart failure those who would normally be considered to have an ideal weight die sooner than those who are obese. This may be because people tend to lose weight as they get progressively sicker – a situation that would favour overweight patients.

For patients suffering from an infectious disease like tuberculosis, which is associated with a sharp decline in body weight, heavier individuals may similarly have an advantage.

Obesity has also been associated with the release of a greater amount of anti-inflammation-related chemicals in the body. Thus, in the case of infectious disease, this might heighten the body’s defences and help fight against bacteria and viruses.

The evidence isn’t clearcut, though.

A 2017 study of patients with community acquired pneumonia showed that patients’ mortality over six years was significantly lower in obese patients compared with normal-weight patients. But there was no significant evidence that inflammation was involved.

Those who disagree with the obesity paradox argue that other disease or lifestyle factors – such as smoking – may confound the results and show an advantage for obese patients where there really isn’t one.

That doesn’t appear to be the case in the Denmark study.

The researchers showed that among patients with obesity, presence or absence of recent weight changes, other health problems, cancer, or smoking had little effect on the association with decreased mortality.

Millions of us spend our days slaving over a keyboard. But lurking between the keys, hidden on the mouse and nestled in your phone lies more than 10 million bacteria – 400 times more than on the average toilet seat.

Unhygienic working conditions are a ‘key contributor’ to the 131 million working days lost each year in the UK and millions more around the world, to illnesses including colds and flu.

Bacteria and viruses can multiply on hard surfaces, remaining infectious for up to 24 hours, hygiene expert and visiting professor at the University of Salford, Dr Lisa Ackerley told MailOnline.

She said the average desk is a prime breeding ground for infections, before urging people to disinfect their desks, telephones, keyboards and computer mice.

She added that better cleaning and hygiene measures could result in ‘significantly fewer sick days’.

Now, a new infographic lays bare the stark reality of how important it is to detox your desk.

It shows one in five workers fail to clean their workspace before eating, while two in three eat lunch at their desk.

Twenty per cent of people never clean their computer mouse, while around 80 per cent of common infections are transmitted by touch.

A new infographic reveals the typical office worker comes into contact with 10 million bacteria at their desks each day, with the average keyboard harbouring 7,500 bacteria and 20 per cent of all workers never cleaning their computer mouse