An obese woman who was left shocked by her own bikini photos has dropped six stone after ditching sugary snacks.

Angela Rosario, 31, from North London, felt mortified after her friend took a photo of her wearing a bikini, which showcased her 16st 4lb frame.

She became determined to lose weight and decided to overhaul her unhealthy diet, which consisted of sugary snacks and processed food.

Angela signed up to the The 1:1 Diet by Cambridge Weight Plan, and in just seven months lost six stone and hit her goal weight of 10 stone.

‘I was even more inspired to lose weight after looking back at myself wearing a bikini,’ she said. ‘I actually thought I looked good, before realising what I actually looked like in the photograph.’

Angela Rosario, 31, from North London,was prompted to change her diet in 2017 after seeing a picture of herself in a bikini. Angela lost six stone in just seven months and has kept to her diet ever since 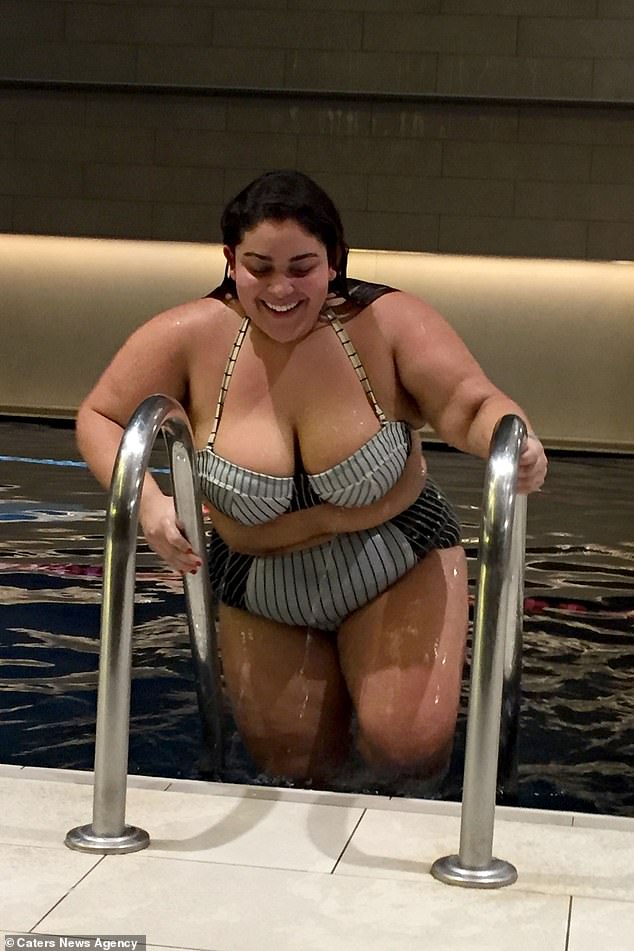 Angela wore a size 18 and used to gorge on chocolate bars and bags of sweets. Pictured: Angela in a size 18 bikini in 2017 before her weight loss

The voice-over artist, originally from Chicago, now feels confident in a size 10 bikini (pictured) and is happier with herself

The voice-over artist now couldn’t be more proud of her bikini body, and proudly showcases her new size 10 frame whenever possible.

Angela said: ‘I had a major sweet tooth and would easily eats multiple packs of crisps and chocolate.

‘I could no longer enjoy exercise, as my size 18 frame left me struggling to breathe.

At her heaviest, Angela (pictured before her weight loss, left) could not exercise because her poor health meant she had trouble breathing. She said that when family visited her from Chicago, they didn’t recognise her new slimline figure (right)

Angela, pictured in a black skirt and grey sweater before her weight loss, said that her main weakness was chocolate and crisps. Angela said she spent years longing to lose weight, but would never do anything about it. Now, she finally feels like the person she’s always wanted to be (pictured now after the weight loss, right)

‘Knowing that I couldn’t keep taking my health for granted, I decided to kick start my weight loss journey and began following The 1:1 Diet by Cambridge Weight Plan.

‘I swapped my copious amounts of chocolate bars for their low calorie bars, and the weight started to fall off.

‘In just seven months I had reached my goal of 10st and I couldn’t have felt more proud.

‘I finally feel as though I have granted her wish by losing my excess weight.’ 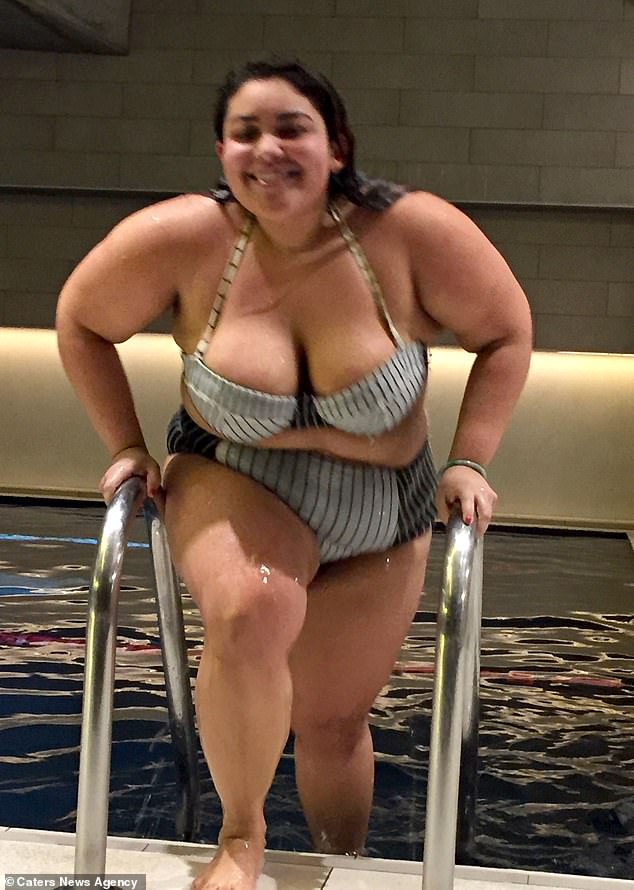 One of the bikini pictures that prompted Angela to go on a diet. She admitted she used to eat several packs of crisps and chocolate bars every day 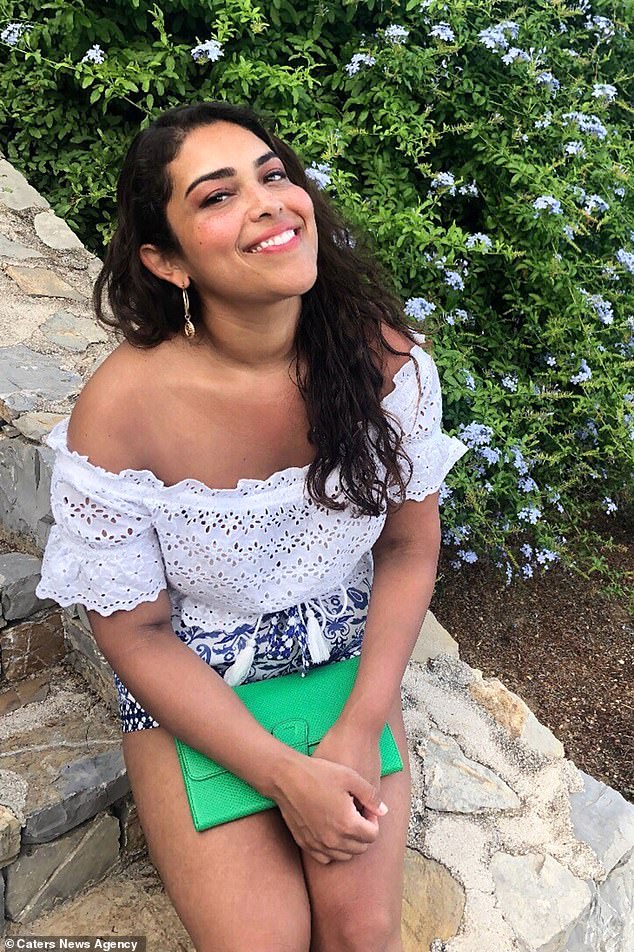 Angela showing off some skin in shorts and a white top after her weight loss. Angela still follows her diet plan today, to maintain her slimmer figure

After first joining The 1:1 Diet by Cambridge Weight Plan in January 2017, Angela still follows their diet plans and insists it’s the reason she has kept on track.

Angela said: ‘I can finally wear a bikini and know that I don’t look obese now I’ve hit my goal weight, it’s such a great feeling.

‘I now don’t have to think twice about going out with my friends whereas before I’d have felt self-conscious.’

Angela – who is originally from Chicago, said her family didn’t recognise her when she visited them after her weight loss.

She added: ‘No one could believe how much weight I’d lost.

‘I spent years being obese and always longing to lose weight but I never did anything about it.

‘I’m finally the person I wanted to be in my mind.’ 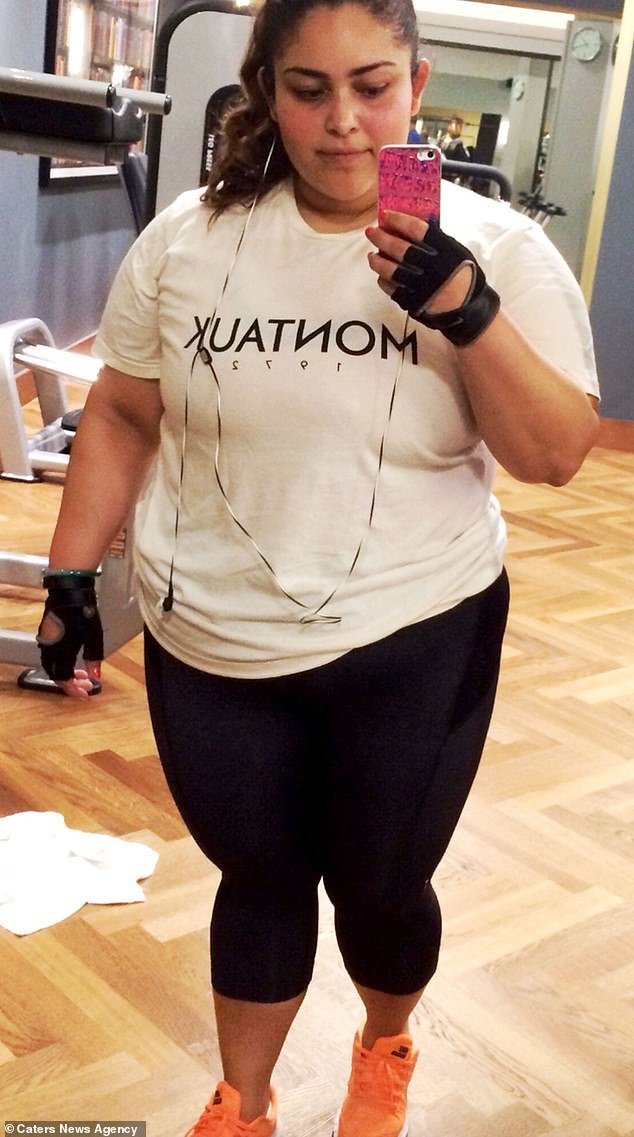 A first step towards a healthier weight. Angela ditched processed food for the gym and did not look back (pictured at the start of her weight loss)