An obsessive fan, who was plotting to murder a YouTube star’s boyfriend after watching the couple’s online videos, was shot dead by police after breaking into their home.

Popular YouTube couple Megan Turney, 30, and Gavin Free, 29, were forced to hide in their own wardrobe after Christopher Giles, 23, broke into their Austin home in Texas, last month.

The terrified entertainers called 911 as Giles, who was armed with a handgun, smashed a window to gain access to their home, waking them up at 3.40am on January 26, KVUE reports.

Popular YouTube couple Megan Turney and Gavin Free (pictured) were forced to hide in their own wardrobe after an intruder broke into their Austin home in Texas, last month 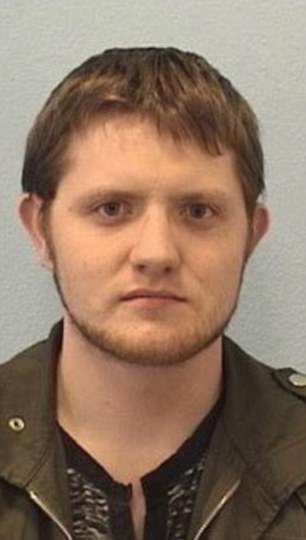 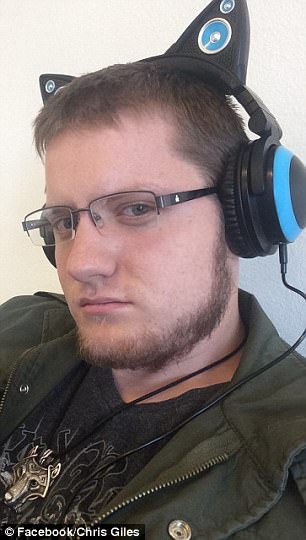 Obsessive fan Christopher Giles (left and right) had become infatuated with Turney and hoped that her boyfriend would ‘die alone, with no children’

Giles, who’d driven 11 hours from New Mexico, walked around the YouTubers’ home looking for the couple, and firing his gun.

Unable to discover Turney and Free, the gunman returned to his car, just as police arrived at the scene.

He opened fire on the cops, who shot back, killing the intruder.

Police said ‘it was apparent that Giles’ sole intent was to cause harm to someone who resides there.’

They described Giles as ‘single, lonely and disturbed’.

After the fatal shooting, officers searched Giles’ home and cellphone where they found more evidence of his obsession with Turney.

Cops found several notes in Giles’ phone referring to Turney and her boyfriend Free by name. Many of the notations revealed a ‘fondness’ for Turney but others suggested he was jealous of Free and bitter of his life and success. 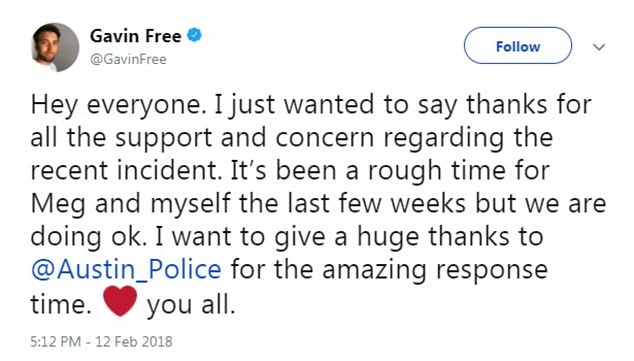 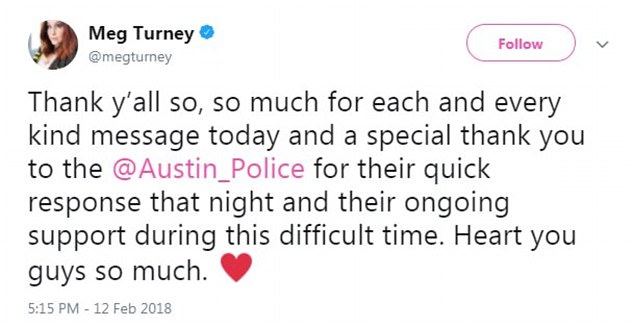 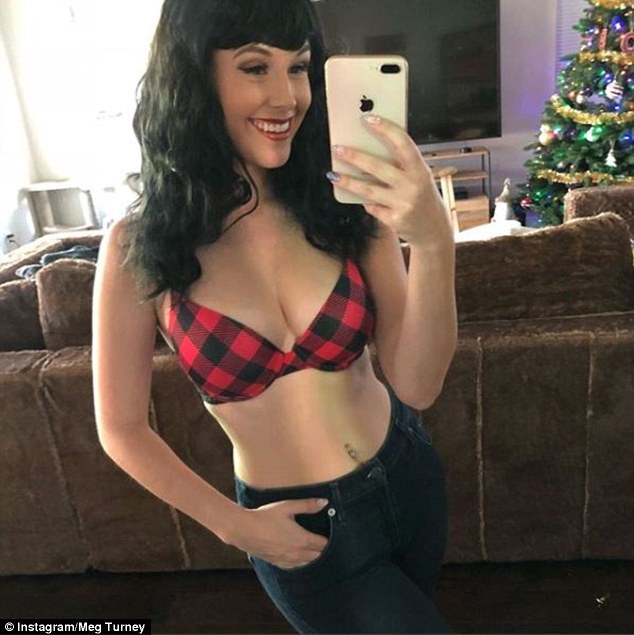 Court documents stated: ‘Threatening thoughts were recorded by Giles and directed toward Gavin Free, i.e., “I want Gavin Free to die alone, with no children.”‘

They also found evidence that Giles had been planning the ‘burglary and homicides of Megan Turney and Gavin Free’ at his home. The search also revealed Giles ‘was an avid player of video games and was known for watching YouTube videos.’

Free has since tweeted his thanks to the Austin police for their quick reaction. Giles was shot dead within ten minutes of the couple’s initial 911 call.

‘Hey everyone. I just wanted to say thanks for all the support and concern regarding the recent incident,’ he tweeted on Monday. ‘It’s been a rough time for Meg and myself the last few weeks but we are doing ok.

‘I want to give a huge thanks to @Austin_Police for the amazing response time.’

Turney added: ‘Thank y’all so, so much for each and every kind message today and a special thank you to the @Austin_Police for their quick response that night and their ongoing support during this difficult time. Heart you guys so much.’ 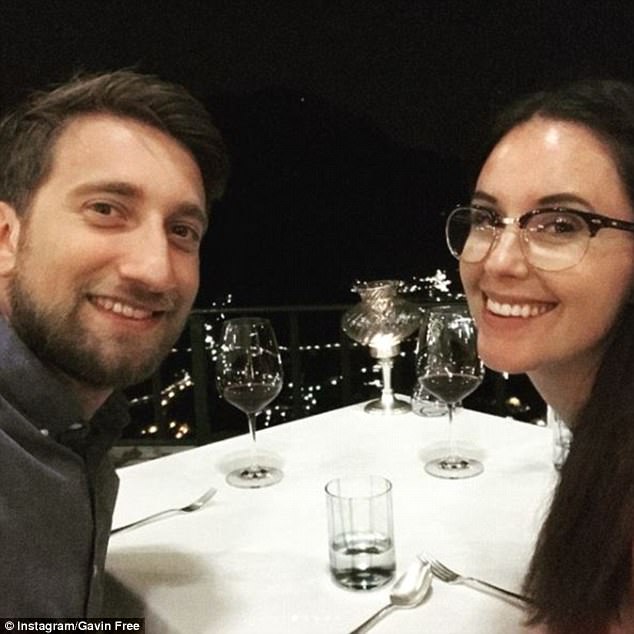 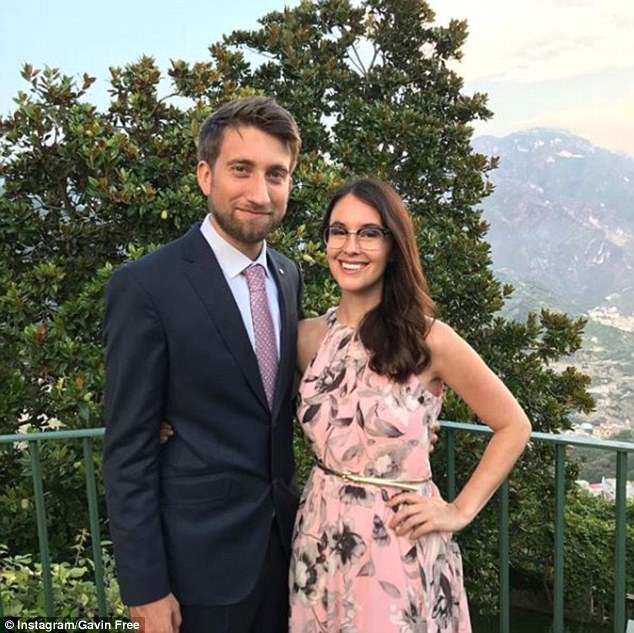 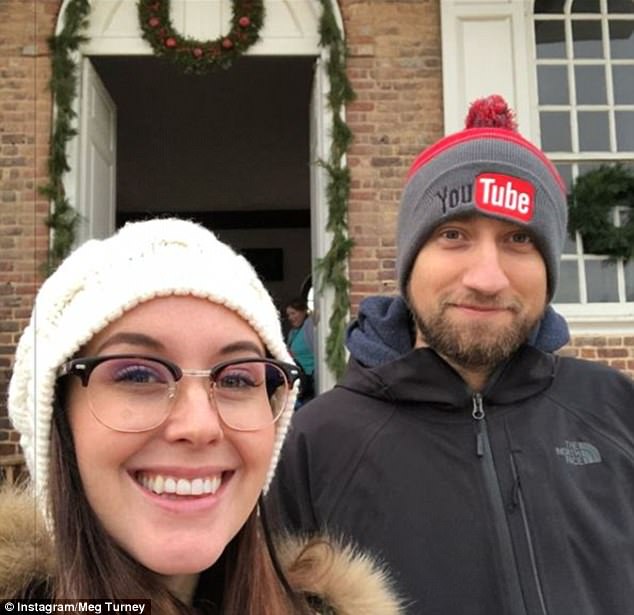 Turney, of Austin, who has an estimated net worth of $500 thousand dollars, according to Celebrity Net Worth, is known for cosplaying and for being a host of internet news programs SourceFed and Rooster Teeth’s The Know, as well as her own vlog channell.

Her boyfriend Free, who she has been dating since 2013, is worth as estimated $5 million. The British-raised Free was a creative director at Rooster’s Teeth and host of the Slow Mo Guys. Free has 10 million YouTube subscribers.

The couple each have their own channels, but would often do videos together.

Just a month after the terrifying experience, fellow YouTube star Logan Paul found an intruder on his couch.

The disgraced YouTuber, who recently had all ads pulled from his videos by YouTube for posting inappropriate content including footage of the body of a man who had just committed suicide and the YouTuber tasering rats, made a citizen’s arrest after discovering the 20-year-old asleep in his home.

Paul initially claimed he wouldn’t press charges, saying: ‘I feel like the kid made a mistake. God knows for what f**king reason that happened, but seriously if there’s one thing I’ve learned in this past month it’s forgiveness.’

He later did a U-turn on his decision, and decided to take the man to court. Last week, the intruder was sentenced to 30 days in jail for aggravated trespass. 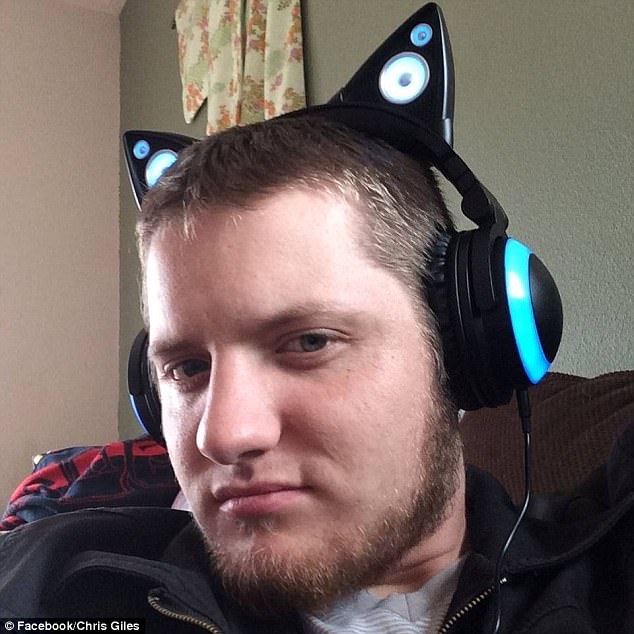 Giles, of New Mexico, was shot dead by cops just ten minutes after the YouTubers called 911. Police described him as ‘single, lonely and disturbed’