A busy office worker who ballooned from a size 8 to a size-16 during the Covid-19 pandemic has revealed how she lost three stone in just four months.

Monika Kurtova, 45, from London, found herself eating late dinners and cheesecake at breakfast time after working long hours during the pandemic.

After tipping the scales at 13st, Monika became  motivated by the backless dress she wanted to wear for Christmas and threw herself into working out three times a week with a personal trainer and following a high protein diet plan.

After just a few months, she weighed in at 10st, and found the exercise routine had helped her manage the pain caused by functional scoliosis which had plagued her since childhood.

She told MailOnline every element of her life had improved since she had started the fitness regime, adding:  ‘Yes there were times when I thought, ‘can I carry on?’, where you doubt yourself but those are the parts where you just have to keep going, trust the process and celebrate every achievement along the way.’ 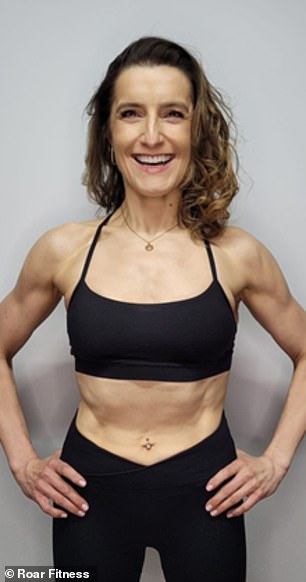 Monika Kurtova, 45, from London,  who ballooned from a size 8 to a size-16 during the Covid-19 pandemic has revealed how she lost three stone in just four months

Speaking to FEMAIL, Monika said she had ‘always been fit and slim’ before the pandemic – but began struggling with her weight during lockdowns.

She explained: ‘I was slim before but it was always an extreme calorie deficit – I was a size 8 but did not have healthy a lifestyle.

‘I’d be living on a miso soup or salad and a biscuit – it was not the right amount of food.’

Meanwhile she was also struggling with managing a painful long-term condition. 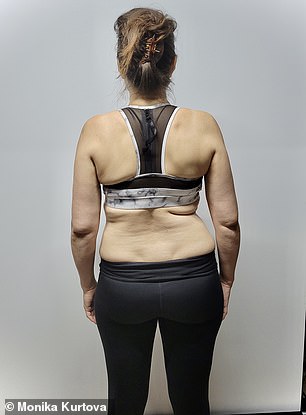 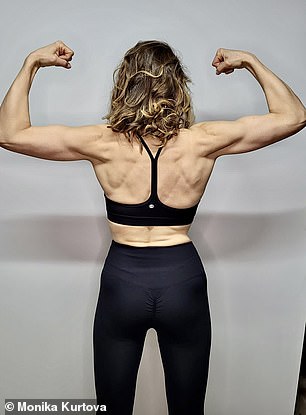 After: Monika dropped fat from all over her body, and no longer suffers with the pain caused by functional scoliosis

Monika suffered functional scoliosis as a result of years of practising as a professional classic accordionist.

She added: ‘Musicians often do not talk about the pains in their body. People see the beautiful performance and smile on the stage but often they suffer from a back pain, shoulders and hips misalignment.

‘I was practising about six or seven hours per day and sitting in a twisted position for 15 years which left me with scoliosis.

‘I have been living with back pain for 30 years.’

She said: ‘After Covid, I somehow found myself not being the same. I’d had enough.

‘I needed to find a way to change this but there must be a way to do it where you will not be hungry and eat healthy, delicious and nourishing food.

Last October, Monika said she finally joined the Roar Fitness gym, adding: ‘I felt amazing from the minute I started – everybody was so welcoming and there was none of the awkwardness you often have when you walk into a gym if you don’t look super-fit.’

She signed up to an intensive fitness programme – meaning she had to start getting up at 5am to be ready to train at 6.30am.

But far from starving herself and cutting back on calories, Monika actually struggled with the volume of food she was required to eat.

She said: ‘I was shocked at how much food I had to eat. I’d never eaten breakfast before and suddenly I had to have salmon, two eggs and half an avocado and while my brain said ‘no’, I had to trust the process and do what they told me to do.

‘But I found myself not being hungry and straight away, in the first three weeks, I dropped 3kg then in the next three weeks another 3kg – it was like magic, it was incredible.

‘In the first month I was down 4kg, all while not being hungry. You eat, you’re not hungry and you’re slimming down.

‘I got the momentum, and I wanted to wear a backless dress for a New Year’s Eve party.

‘I had bought it and it was hanging on my wardrobe door so I would see it daily. Eventually, I was ready to wear it by December 15 – way earlier than planned.

‘I also had a bikini on display, and am now ready for a beach holiday.’

‘The sessions with Morgan, my trainer, were incredible and I learned so much from him. Nothing was an effort and there was a constant gentle push but, in a way where it didn’t feel like a chore, though I still kept progressing.

And while cutting back on bread and chocolate might be a chore for some, teetotal Monika said she barely missed any foods or treats during the diet – except cheese. 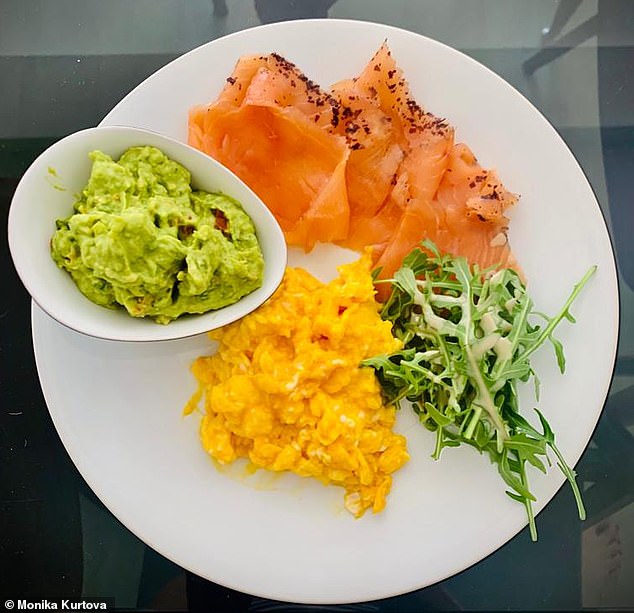 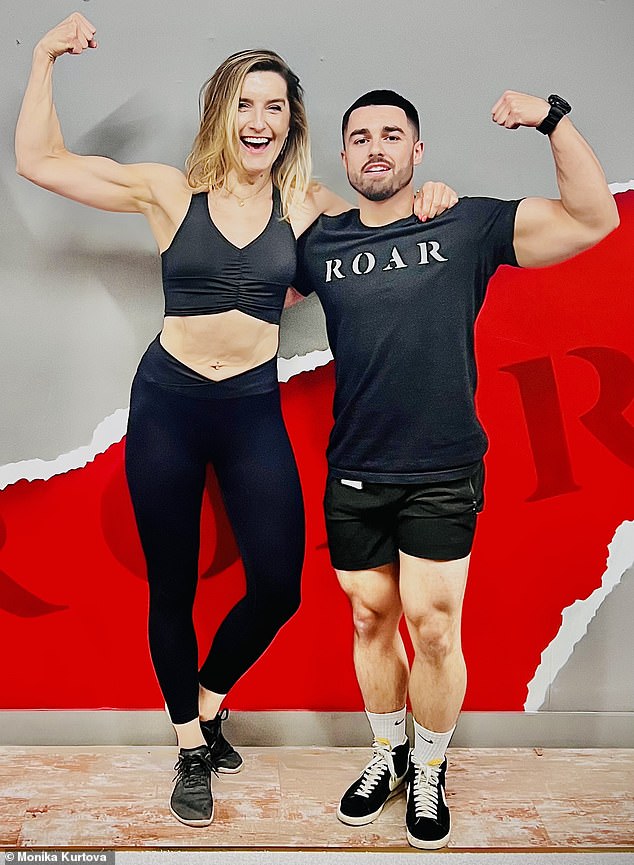 Monika followed a 16-week programme at the gym, working three times a week with personal trainer Morgan Harris (pictured together) 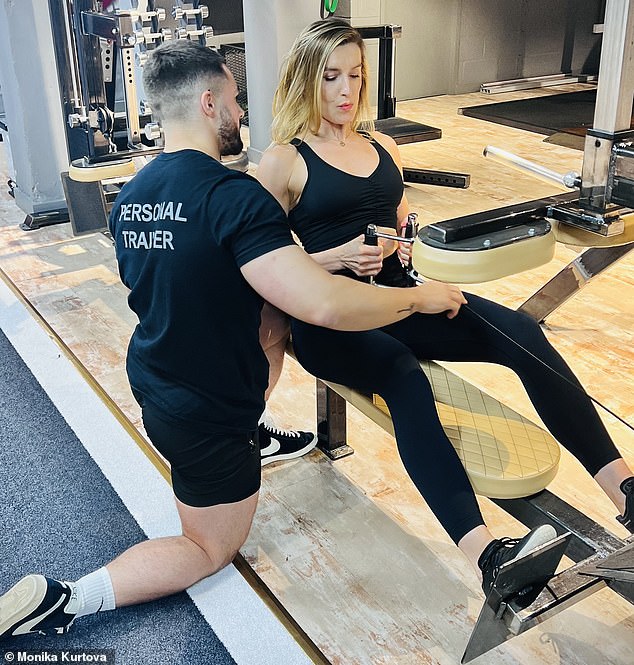 After just a few months, she weighed in at 10st, and found the exercise routine had helped her manage the pain caused by functional scoliosis which had plagued her since childhood 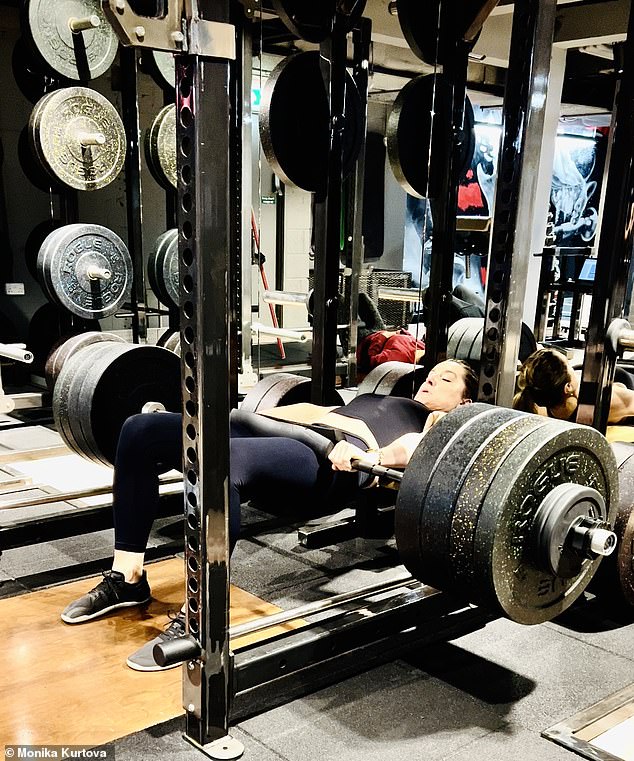 She said her diet plan was ‘great’, adding: ‘I absolutely loved eggs and salmon for breakfast or protein pancakes. I made every flavour that exists – chocolate, hazelnut, vanilla.

‘It might be overwhelming to start with but I had to be superbly organised and plan all my food the week at the weekend because my work is so busy.

‘I had a dedicated shelf in my fridge for blueberries as they substituted the carbs when I had a sweet craving.

‘But there was delicious variety and what is there not to like if your dinner takes 15 minutes to make?’

And it wasn’t just her weight that changed. After the four-month programme, she found the pain she had suffered since her teens had ‘completely subsided’.

Hanging in there: The 45-year-old now hits the gym early in the mornings, determined to reach her goal

She added: ‘Previously, I would have to get up and walk around at work but now I can sit for longer periods of time because the curvature in my spine has improved immensely.’

She added: ‘I can now hip thrust 165kg – more than double my body weight and when people ask why I lift so heavy, I tell them I want a peachy bum.’

For many, maintaining their new streamline figure after losing weight can be the most difficult part of the process.

But Monika has remained a svelte size 8 and is now pushing herself with a new challenge, taking up weightlifting.

She added: ‘After finishing the four month programme, I was like, what do I do now? Friends were asking if I was working out twice a day but my calories went up and I only trained twice a week. My weight and waistline have remained the same.

‘There is this misconception that if women lift heavy you will be bulky, but that’s not true – you get leaner, stronger and beautifully toned.

‘It’s incredible how our bodies are such an amazing machines – we just need the right fuel.’

She added: ‘I would like to inspire as many women as possible by staying in the best shape of my life and this is just a start. I am in in my mid 40’s but excited about what I can do with the weights and where will this journey lead to.’

SNACKS: Croissant or cheesecake at 11am, tea and coffee

LUNCH: Large salad with fish or chicken and dressing

DINNER: Soup or hummus and crudités