Olivia Culpo and Kelsey Merritt were just a few Sports Illustrated hotties that turned out for the magazine’s 2021 issue launch party in Hollywood, Florida.

Held at the Seminole Hard Rock Hotel & Casino on Friday evening, some of the most famous centerfolds and cover girls showed major skin at the very sexy event.

Culpo, 29, bared much of her midriff in a figure hugging dress with cutouts while Merritt, 24, heated up the party in a slinky mesh dress which showed off her body.

The former beauty queen looked tastefully exposed as she stood out in a long white gown that featured an S-curved cutout in the middle and another at her thigh.

Culpo opted for silver accessories and sported elegant earrings while tying her hair back in a sleek low bun.

Her almond shaped eyes were accentuated with winged eyeliner and she added a pop of color with a bright pink lip. 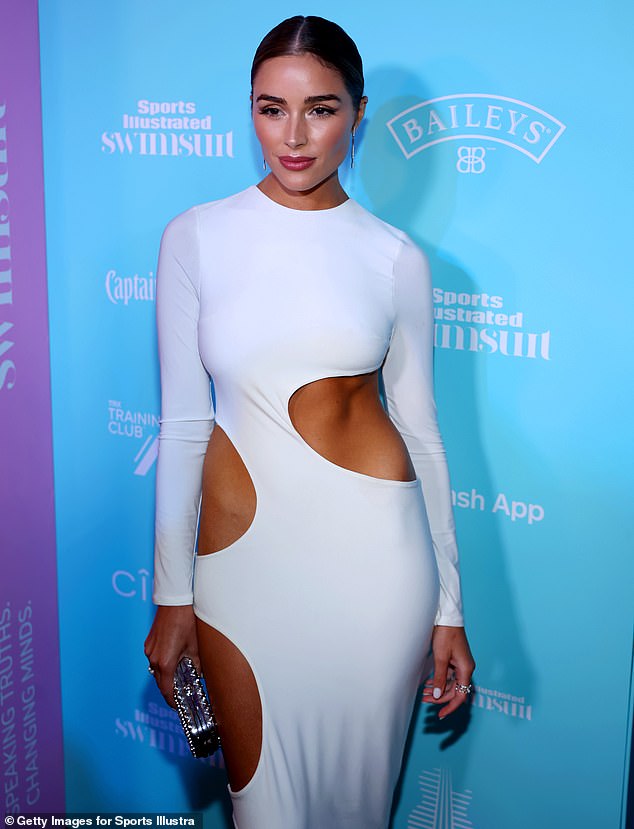 Peep show: The former beauty queen looked tastefully exposed as she stood out in a long white gown that featured an S-curved cutout in the middle and another at her thigh

180: The brunette beauty worked her angles as she showed off every inch of the elegantly racy gown

And Merritt bared her backside in a glittery spaghetti strap dress which featured a scoop neck in the back and a high slit that fell just below her butt.

The Phillipines-born stunner showed off her incredible figure in the floor length gown and protected her modesty with a built in thong bodysuit.

Her brown hair was styled down in sultry waves and she rocked a simple lariat necklace. 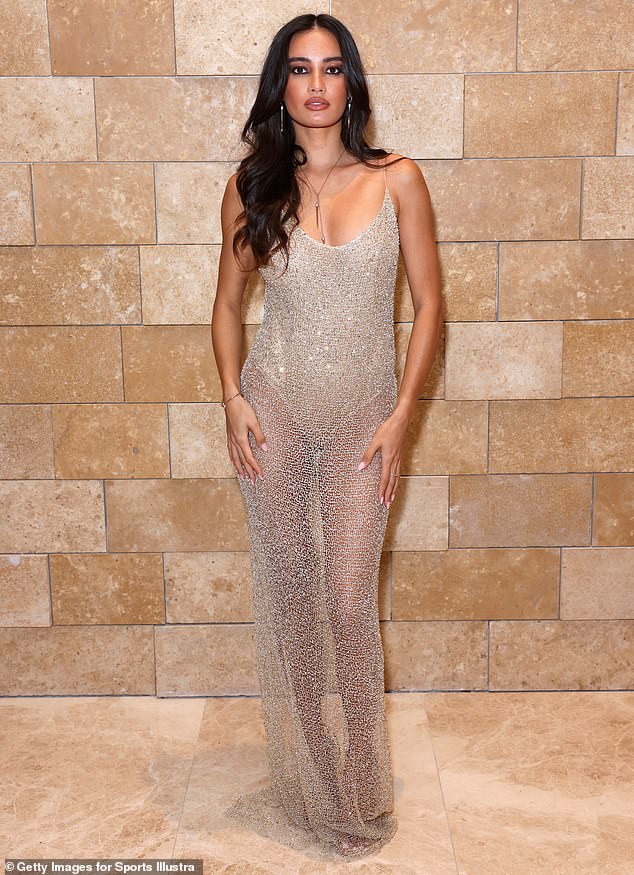 Center stage: The Phillipines-born stunner wore a glitter mesh dress that showed off the entirety of her incredible body

Cheeky: The racy outfit featured a pronounced slit up the back that showed off her butt

Covergirl Megan Thee Stallion dazzled in a rhinestone mesh gown that allowed her showcase every inch of her curvaceous frame.

The 26-year-old rapper recently made history as the first female rapper to grace the cover of Sports Illustrated.

Megan’s eye-catching number had dramatic slits down each leg that were held together by jeweled strands, which were also present across the bust. 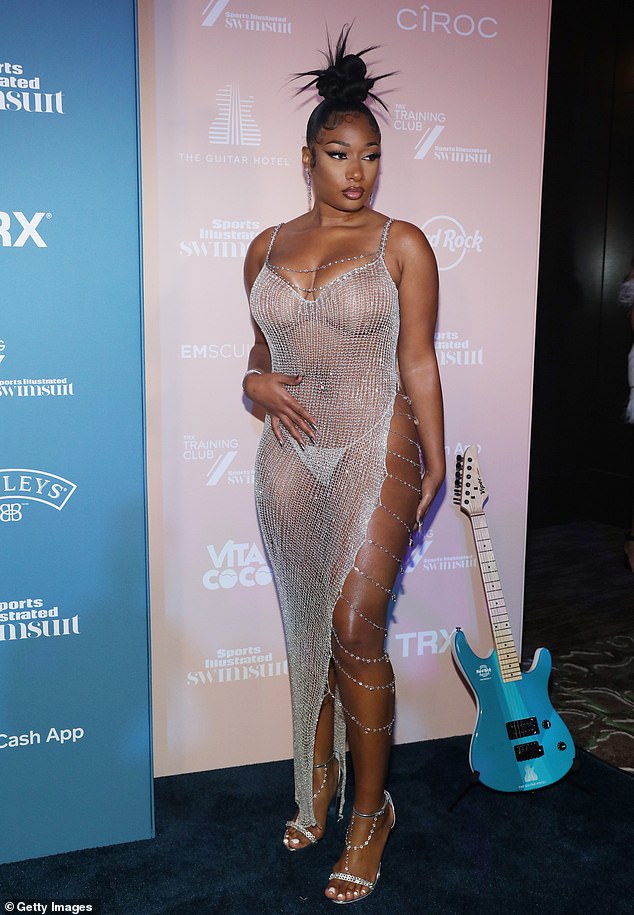 Covergirl: Megan Thee Stallion dazzled in a rhinestone mesh gown that allowed her showcase every inch of her curvaceous frame

Diamond darling: Megan’s eye-catching number had dramatic slits down each leg that were held together by jeweled strands, which were also present across the bust 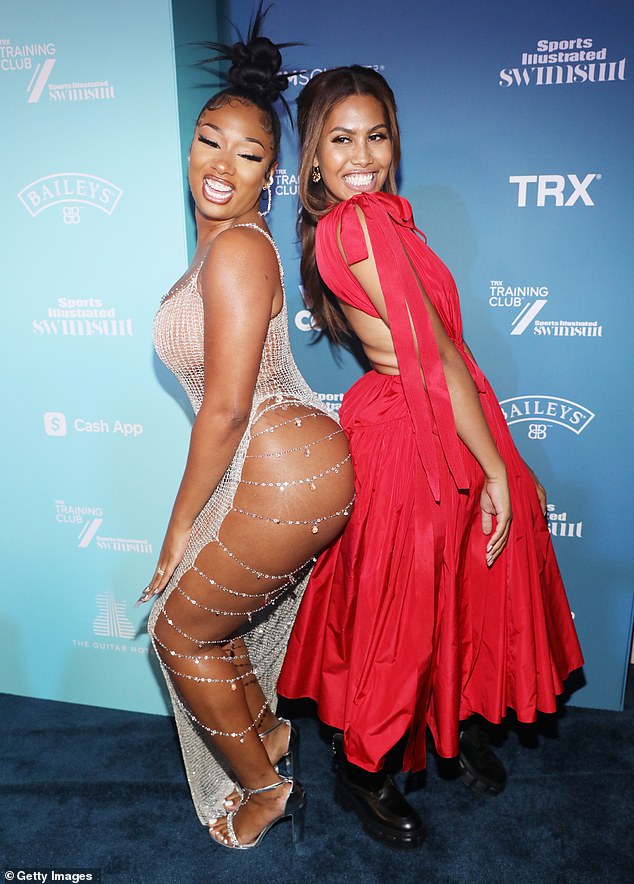 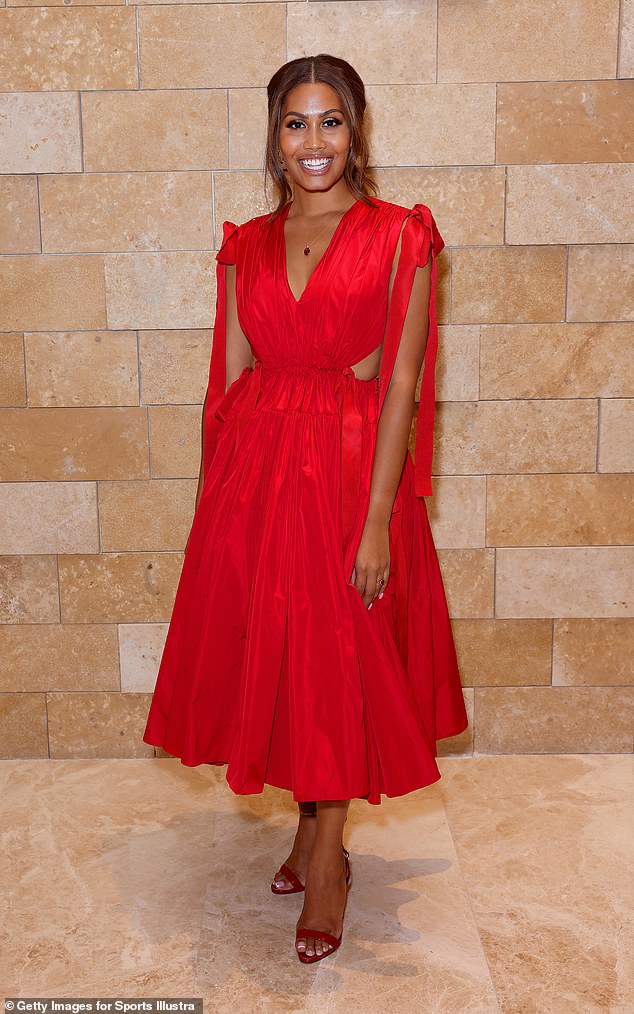 Lady in red: The model puckered up for the camera alongside Megan in a bright red dress with an accordion-style skirt and bows on the straps

Layered beneath her gown was a tiny silver thong.

Megan was later joined by fellow covergirl Leyna Bloom, who is also featured on this year’s highly-coveted SI Swimsuit Edition.

The model puckered up for the camera alongside Megan in a bright red dress with an accordion-style skirt and bows on the straps. 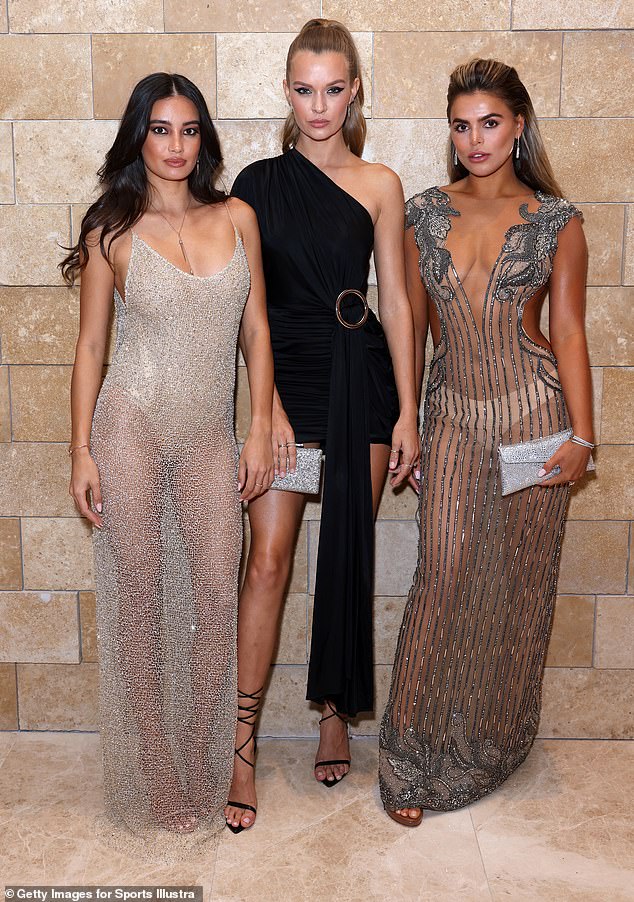 Gals: Sexy: The launch of the 2021 issue was full of former centerfolds and cover girls who celebrated a very sexy evening

Showing skin: The models showed off their sexiest looks at the event in Florida 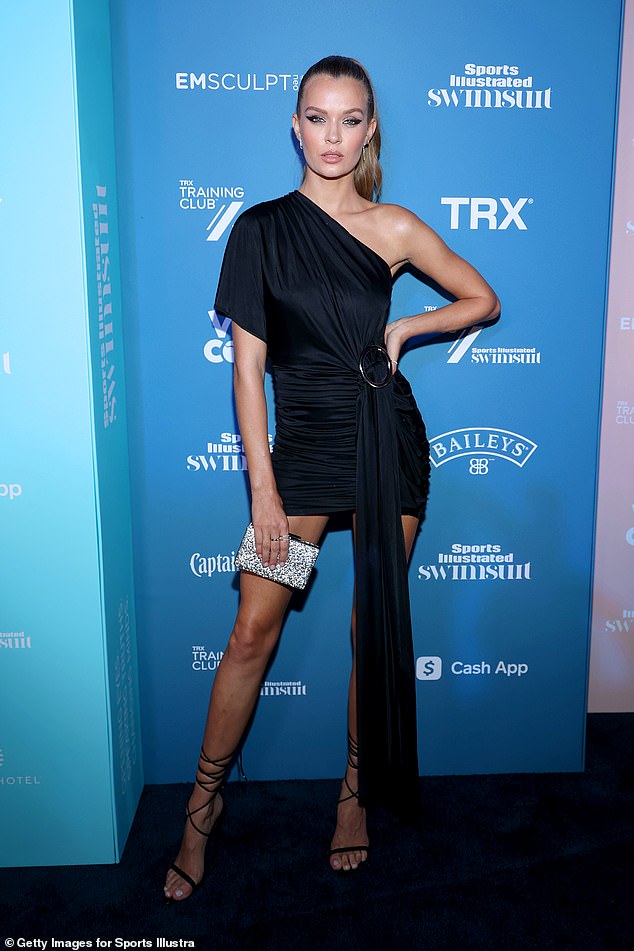 Work it: Skriver posed with her hand on her hip and wore a high ponytail

Silver moment: Silver was a popular choice for the event 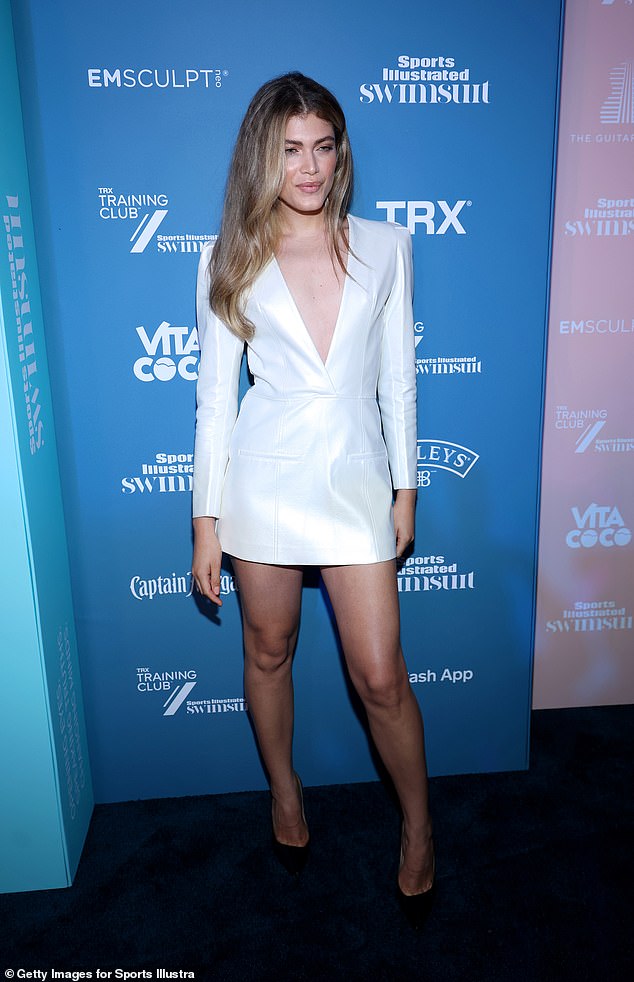 Stunner: Valentina Sampaio was all legs in a plunging satin mini dress

Skriver looked leggy in a one shouldered black mini dress with a dramatic hanging detail and strappy heels.

And Nader was on theme for the evening as she wore a plunging sheer sparkly dress which exposed nude underwear.

Valentina Sampaio was all legs in a striking satin mini dress featuring a plunging neckline and long sleeves.

Ribeiro looked like a modern day flapper in a micro dress with fringe while Sanders wore a velvet mini dress with pearl detailing on the thigh. 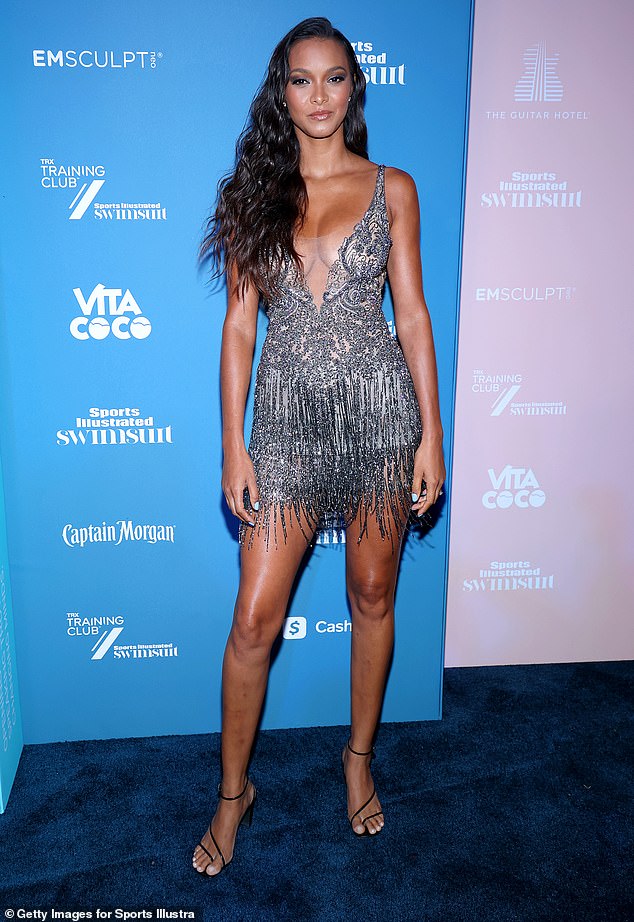 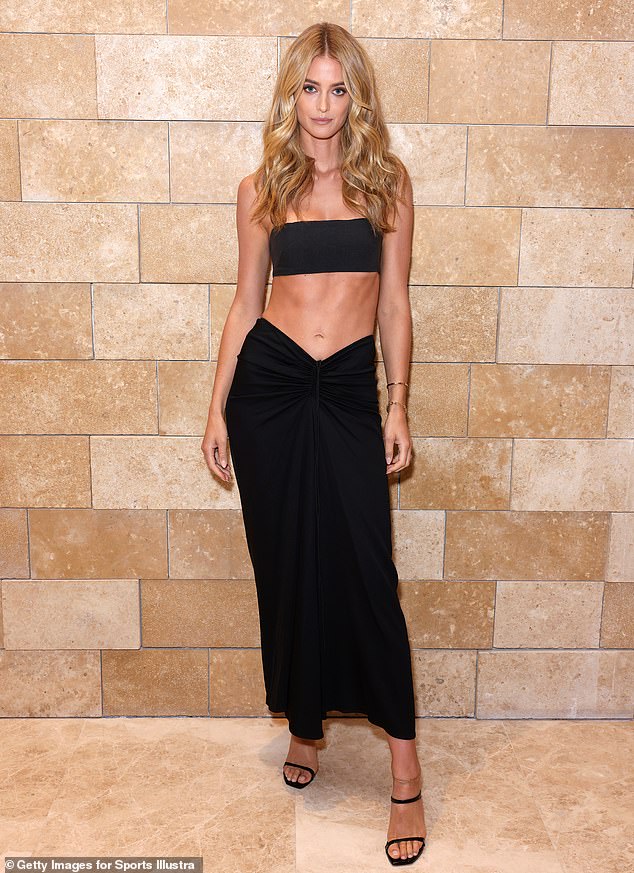 Bombshell: The blonde bombshell opted for a monochromatic look

White hot: Many ladies opted to lean into the summery color of white with silver accents

Tinashe was tapped to perform at the magazine cover reveal alongside Megan Thee Stallion and Anitta — all three of which are featured this year.

Though the Friday evening event was invite-only the weekend has also included events for the general public including beauty and wellness activations.

Also in attendance was Sports Illustrated editor MJ Day who recently went to bat for Osaka after conservative commentators Megan Kelly and Clay Travis criticized the tennis pro for pulling out of Wimbledon to focus on her mental health.

Monochrome: The party was full of all white, all silver and all black looks 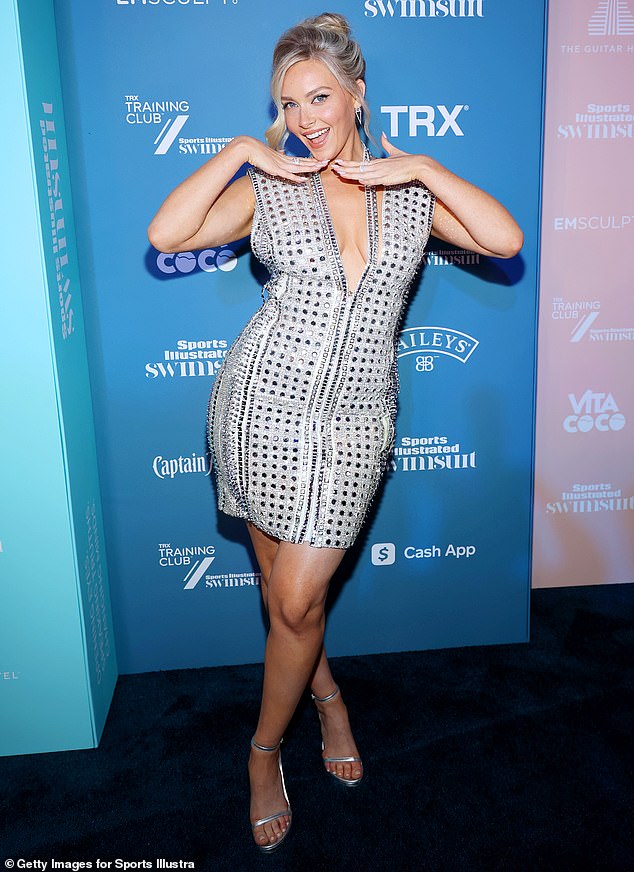 Animated: Kostek showed off her playful side on the red carpet

Edgy: Tinashe wore a white cropped top and ruched trousers which clung to her body 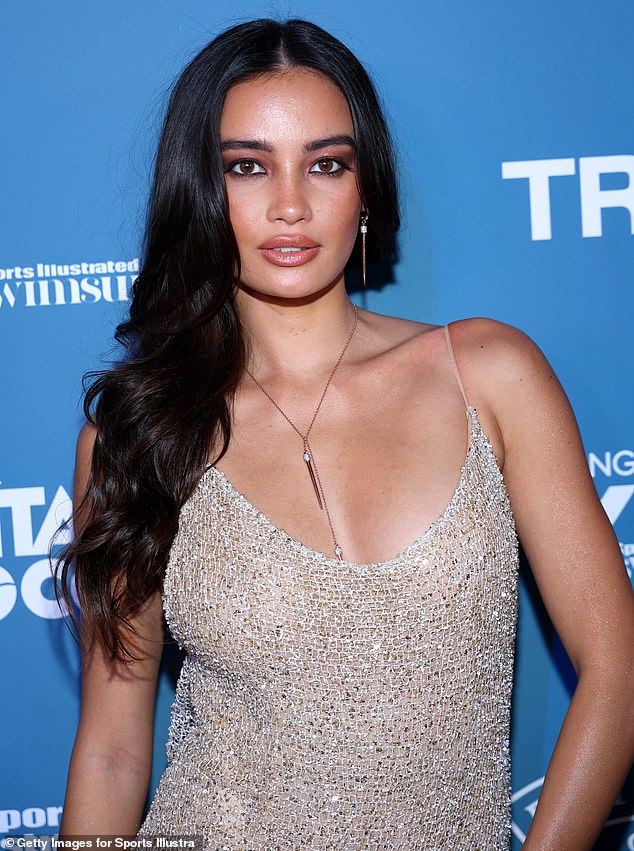 ‘Since saying she’s too introverted to talk to the media after tennis matches, Naomi Osaka has launched a reality show, a Barbie, and now is on the cover of the SI swimsuit issue,’ Travis tweeted.

Megan followed up: ‘Let’s not forget the cover of (& interview in) Vogue Japan and Time Mag!’

Day slammed both of them. ‘It’s such bullying, and it’s so unnecessary,’ Day said on an episode of the People Every Day podcast.

‘I’m like, ‘You know what, you’re journalists. How about you do your job and you fact-check, instead of jumping all over this woman for attention?’ 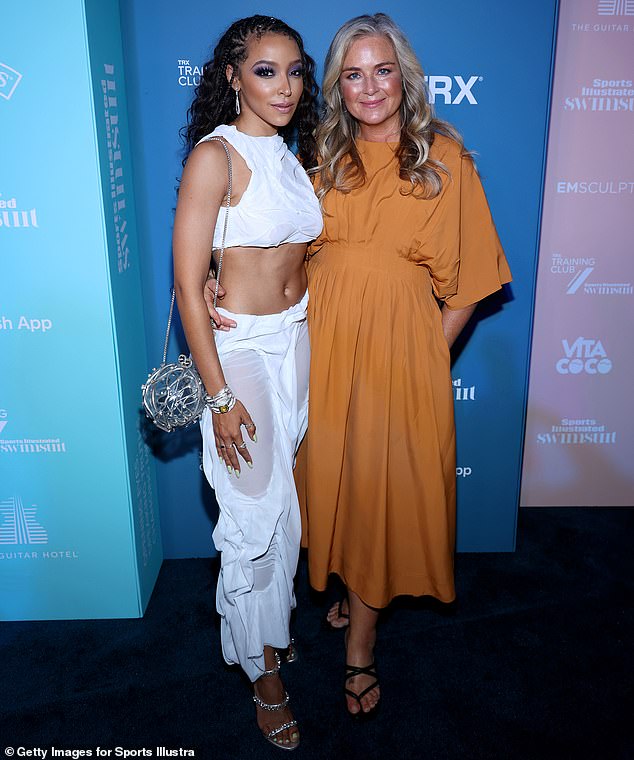