U.S. Olympic freestyle skier Gus Kenworthy and his boyfriend Matt Wilkas are celebrating the release of a puppy in South Korea that was destined to become dog meat.

Beemo is one of 80 dogs rescued by Humane Society International from a dog meat farm and flown to safety in Canada.

He won the hearts of Kenworthy and Wilkas when they visited HSI’s the farm before it was shut down last month.

Glorious reunion:  American Olympian Gus Kenworthy is reunited with Beemo in Montreal at the SPCA Montreal Annexe on March 18 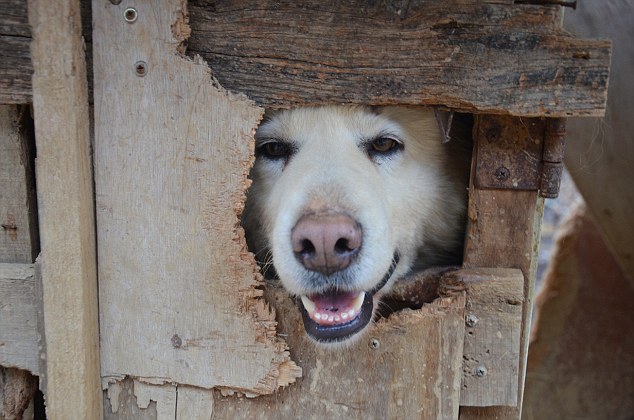 HSI is working in Gyeonggi-do province, South Korea, to shut down a dog meat farm and save more than 80 dogs from slaughter 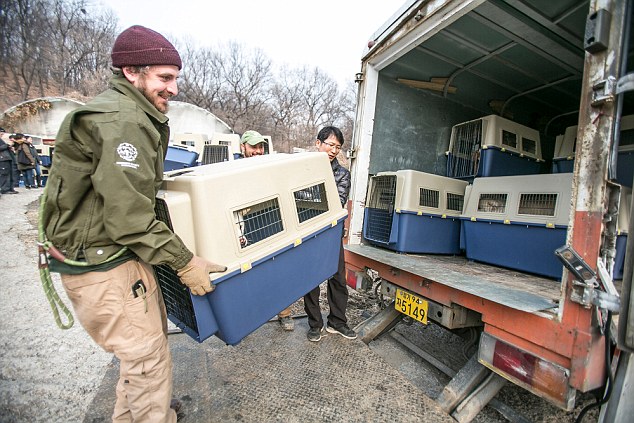 The HSI Animal Rescue Team load the crates onto the truck at a dog meat farm in Siheung, South Korea, on Monday, March 12, 2018 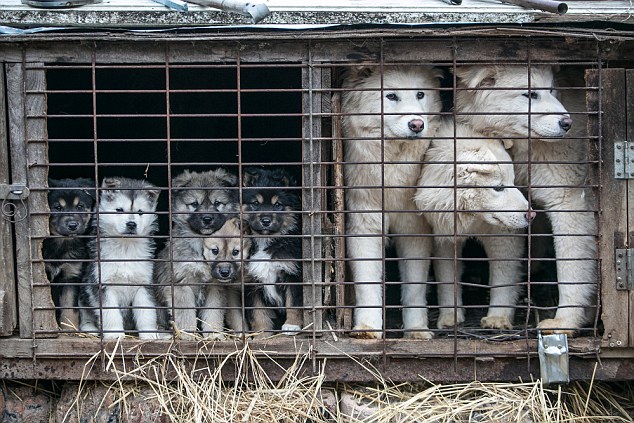 Beemo, second from left, Evy, fourth from left, and other dogs are shown locked in a cage at a dog meat farm in Siheung, South Korea, on Monday, March 12, 2018 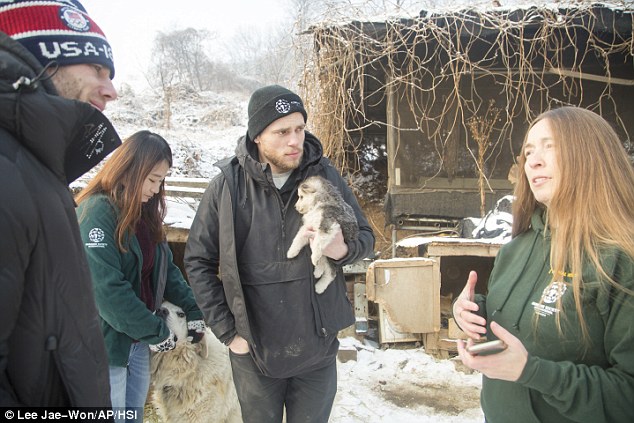 Kenworthy and Wilkas were reunited with little Beemo at Humane Society International/Canada’s temporary shelter in Montreal, where the rescued dogs will receive desperately needed care and attention in the coming weeks.

The jindo/husky mix pup was living in subzero temperatures on the property in Gyeonggi-do province when the pair spotted her.

‘Visiting the dog meat farm in South Korea was one of the most heart-wrenching things I’ve ever done,’ Kenworthy said. 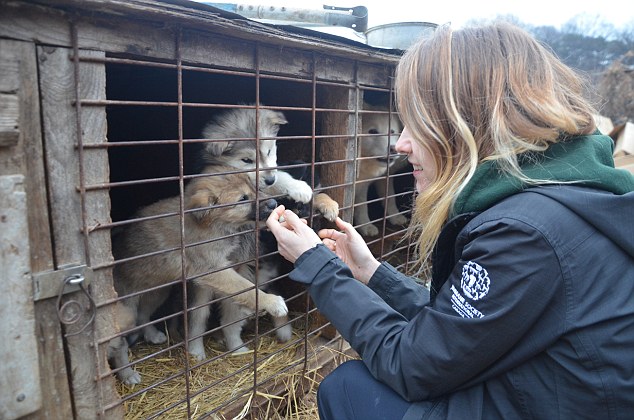 HSI/Canada worked in Gyeonggi-do province, South Korea, to shut down the dog meat farm and save more than 80 dogs – including Beemo – from slaughter 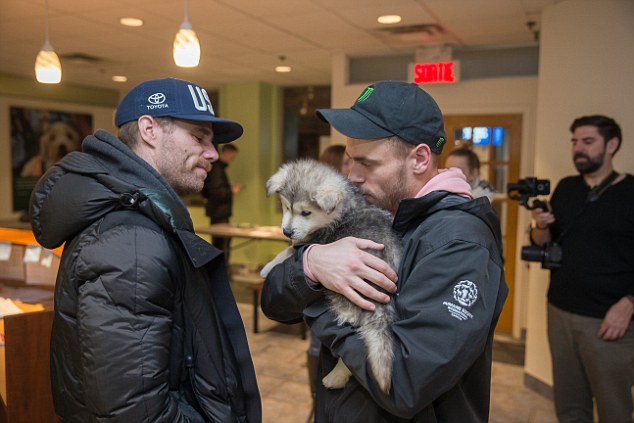 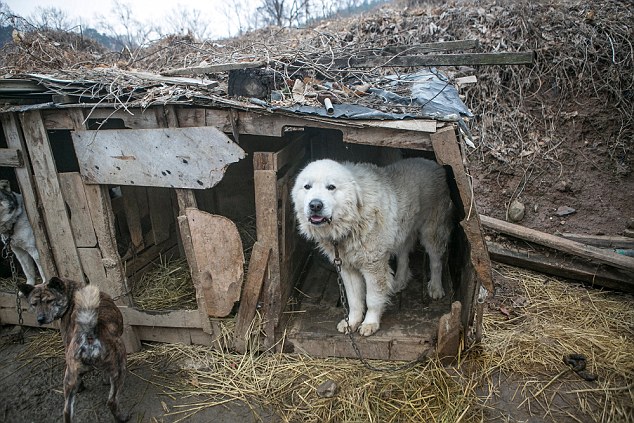 Christopher, at right, a Great Pyrenees, is chained to a dog house along with other dogs at a dog meat farm in Siheung, South Korea, on Monday, March 12, 2018. The operation is part of HSIs efforts to fight the dog meat trade throughout Asia HSI/Canada is working in Gyeonggi-do province, South Korea, and other areas of the country to shut down dog meat farms and save animals from slaughter

‘It really upset me to see these beautiful dogs enduring such horrible, inhumane conditions, and to know that without HSI’s intervention, all of them would eventually end up being killed in really brutal ways to be eaten.

‘I have total respect for South Korea but I don’t believe we should ever use culture as a scapegoat for animal cruelty.’

HSI says that every year, more than 2.5 million dogs are bred for human consumption on dog meat farms across South Korea.

The group has been forming partnerships with dog farmers eager to leave the trade, signing a legal contract to rescue their dogs and help them adjust to a more humane livelihoods such as chili pepper farming or mushroom growing.

It’s a campaign that has so far seen 11 dog farms permanently closed with more than 1,300 dogs saved, providing a working model for change that if adopted by the government and rolled out nationwide, could pave the way to end the trade completely.

Kenworthy and Wilkas toured HSI/Canada’s emergency shelter to see some of the dogs they first met at the ramshackle, snow-covered meat farm.

The dogs are a mixture of breeds including mastiff mixes, jindos like gentle Moon Bear, a Great Pyrenees called Christopher, golden retriever mixes, Samoyed and husky mixes, including one the HSI rescuers named Simba, and a number of Labrador mixes too.

But it was little Beemo, the grey and white jindo/husky cross, that Gus and Matt were especially keen to see again. 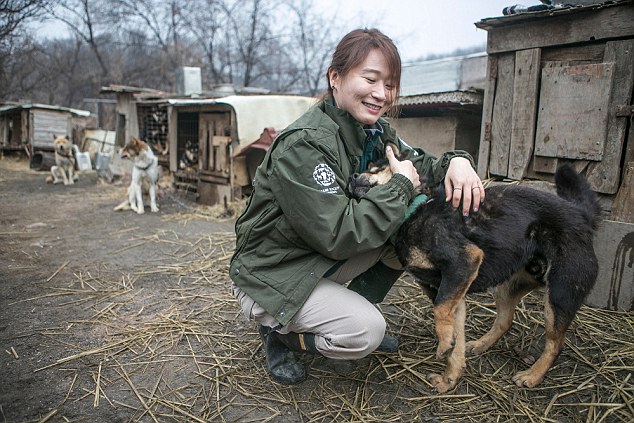 Kaya, at right, is chained to a dog house as puppies grow up in a dog meat farm in Siheung, South Korea, on Monday, March 12, 2018 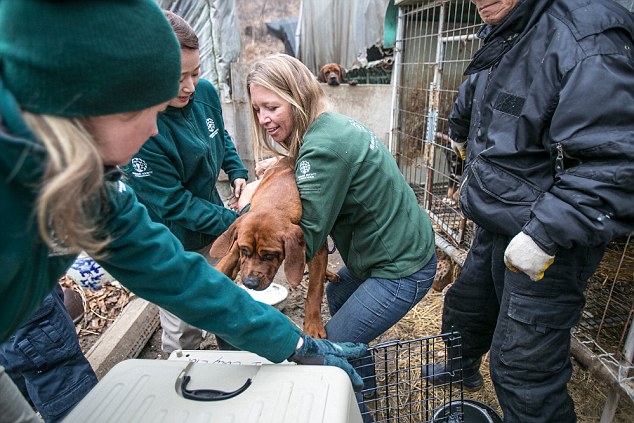 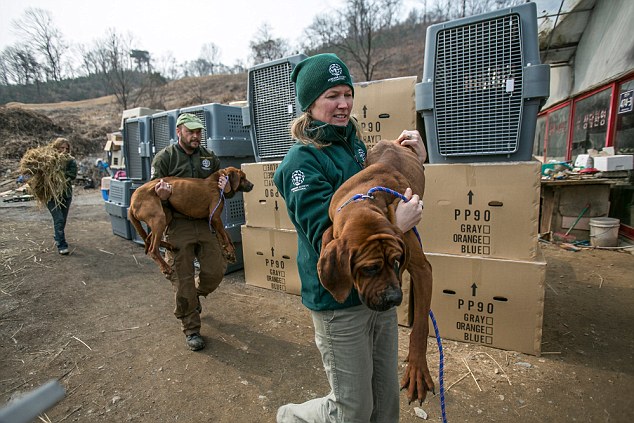 The HSI Animal Rescue Team relocate the dogs at a dog meat farm in Siheung, South Korea, on Monday, March 12, 2018 – the operation is part of HSIs efforts to fight the dog meat trade throughout Asia 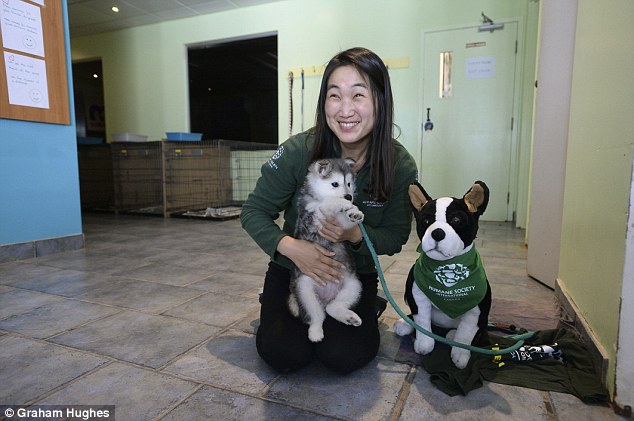 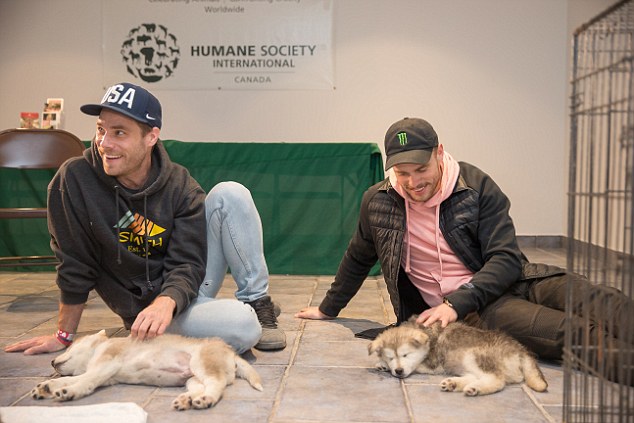 American Olympian Gus Kenworthy (right) and his boyfriend Matthew Wilkas (left) play with Beemo (right) and another puppy rescued from a dog meat farm in South Korea, at the SPCA Montreal Annexe, in Montreal, Quebec on Sunday, March 18, 2018 American Olympian Gus Kenworthy (right) and his boyfriend Matthew Wilkas (left) take a selfie after being reunited with their dog Beemo, a dog they rescued from a dog meat farm in South Korea, at the SPCA Montreal Annexe, in Montreal, Quebec on Sunday, March 18, 2018 Gus Kenworthy photographs some of the dogs rescued from a dog meat farm in South Korea, at the SPCA Montreal Annexe, in Montreal, Quebec on Sunday, March 18, 2018

‘When Matt and I were on the dog meat farm, we fell in love with Beemo instantly. As soon as I scooped her up in my arms I knew she was coming to live with us and we cannot wait to give her a wonderful life,’ Kenworthy said.

‘It’s so great to see her far away from that horrible cage. But there are millions of dogs still suffering back in South Korea, and if I can help raise awareness about how HSI’s dog farm closure team is working hard to end the entire trade, then I’m happy to do so for Beemo and all these wonderful dogs.’

‘It’s far too easy to assume that everyone eats dogs here in South Korea,’ said Kim, ‘but the truth is that’s very far from the case.

‘Most people here don’t regularly eat dog, and in fact most young Koreans have never eaten it at all.

‘It’s a dying industry in more ways than one, and that’s part of the reason why these dog farmers ask HSI for help.’

She said that HSI was standing ‘shoulder to shoulder’ with Korean animal groups in challenging animal cruelty.

‘We hope that the South Korean government will see how our dog farm closures are offering a practical solution that provides a bright future both for farmers and dogs,’ Kim said.

If you live in Canada, to adopt one of these deserving dogs, visit hsicanada.ca/savedogs