One of New York’s most iconic views is in danger of disappearing completely.

Tourists have headed to Brooklyn’s Dumbo neighborhood for decades to photograph the Empire State Building from afar, perfectly framed by the Manhattan Bridge arch.

But this beloved landmark could be ruined due to a new city proposal for three brand new high-rise buildings in Manhattan’s Two Bridges neighborhood.

The Municipal Art Society has found that two of the proposed skyscrapers would block the iconic view that has become an extremely popular Instagram spot.

‘A person standing on the street…where previously you would see the Empire State Building, you will now see part of this development’, Municipal Art Society spokesman Tara Kelly told the New York Post.

The group said that the project, now under consideration by the City Planning Commission, would bring a ‘myriad’ of ‘dire consequences’ to the neighborhood.

Known as the Two Bridges Large-Scale Residential Development (LSRD) Proposal, the project would result in over 2.5 million gross square feet of new development, including over 2,500 new dwelling units that would bring in 6,000 new residents.

‘It is clear the development will permanently change the Two Bridges neighborhood,’ the group argued in a Testimony to the Mayor’s Office of Environmental Consideration. 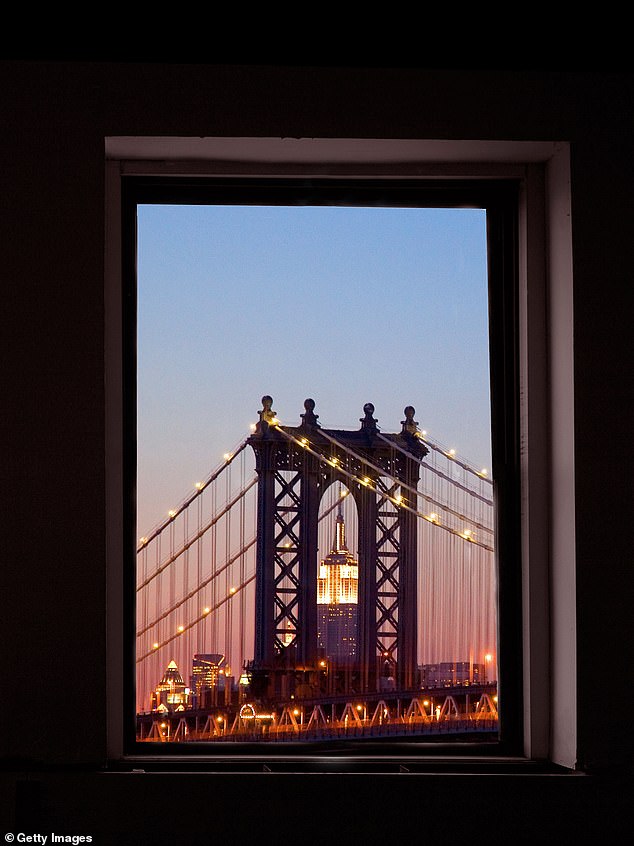 The project proposes three towers. Two of the towers would share the same four-story base and one would reach 62 stories while the other would be 69 stories.

‘You have 6,000 new people coming to the neighborhood that was inundated by Sandy,’ Kelly said.

‘We really think that this is something that requires much more community input, much further study.’

The Municipal Art Society is also arguing that the proposed developments do not comply with the New York City Zoning Resolution regulations.

‘The proposed developments will result in unmitigated adverse impacts on socioeconomic conditions, community facilities, open space, shadows, transportation, parking, and construction,’ it argues in the testimony. 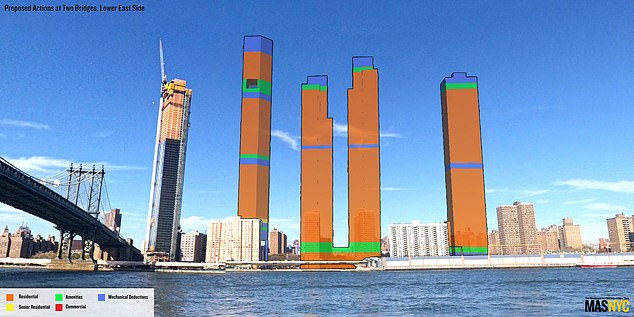 The project proposes three towers. Two of the towers would share the same four-story base and one would reach 62 stories while the other would be 69 floors 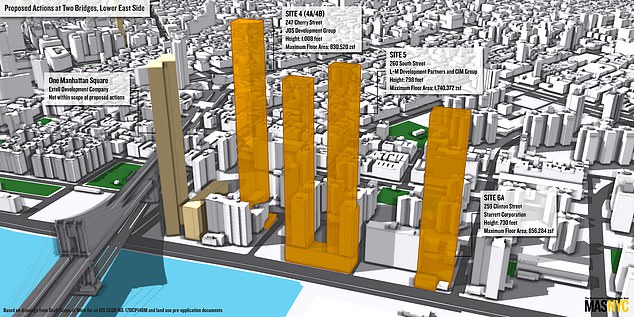 It also argues that the developments would cause ‘major impacts on local traffic congestion’ and would ‘substantially change the essential character of the neighborhood’.

‘The proposed development under the Minor Modification to the Two Bridges LSRD will have serious, long-term, adverse consequences on the Two Bridges community,’ the testimony reads.

‘This neighborhood has been largely left out the planning process for a development that will have far-reaching ramifications.’

The City Planning Commission will vote on the projects, but a date has not yet been set.