Villagers in south Wales have complained after a comedian at the first ever Rhondda Pride event was accused of making inappropriate jokes during a open-air stand-up routine.

Comedy act Deborah Jones, performing as ‘Just Deb’, is said to have called an Asian security guard ‘Abdul’ and asked him ‘made any curry lately?’.

She also reportedly asked a girl how old she was and, when the girl said 10, she replied: ‘Six years is all I have to wait… what school do you go to? I’ll wait outside.’

Audience members also reported Deb saying she had sex with her headmaster when she was 13, adding: ‘It wasn’t illegal back then’.

Some of those who had travelled to the event in the former mining village of Treorchy said her comments were offensive, while others in the village who didn’t attend the event said it was so loud they couldn’t ignore it.

Visitors to Rhondda Pride event have complained about the off-colour jokes of comedian Deborah Jones, who performs as ‘Just Deb’

Selena Caemawr, 37, who travelled from Cardiff to attend the event, said the ‘atmosphere was good’ until Just Deb took to the stage to perform around a 40 minute slot, starting around 6.15pm.

Ms Caemawr said: ‘I’m not a prude but some of the things she was saying seemed really inappropriate. The most awkward thing for me was it was allowed to go on for 40 minutes. I don’t know why she was talking the way she was.’

Gavin Jones wrote to organisers: ‘If a straight white male had got on stage in a free public space and rattled off a barrage of racist, sexist and most of all paedophilic rants at 10 year old children, there would have been arrests and prison sentences thrown out.’

Villager Joanne Banner wrote online: ‘Thought must be given to the local residents who were subjected to listen to the broadcast of foul language and obscenities. Organisers have to consider this when planning.

‘The event itself seemed to be well supported by businesses and residents but this broadcasting of “adult themes” in public really must be addressed if this event goes ahead again.’ 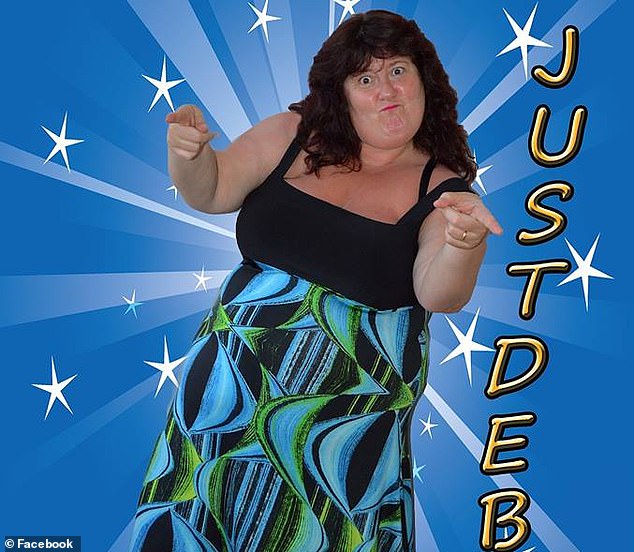 Audience members complained about the content of her routine online, but she insisted it was well received and denied the content was Islamophobic and homophobic

Selena Caemawr tweeted during the routine, expressing shock at what was being said

Local resident Margaret Evans added: ‘It would have been a much better idea if it had been held indoors after 6pm. I could not sit out my back garden from 6pm due to the obscene language that was being broadcasted over the microphone and this could be heard clearly.

‘When you have gardens that overlook the boys and girls club you could not get away from the sound.’

Comedian Ms Jones insisted her act was well received and threatened legal action against those accusing her of bigotry.

She wrote online: ‘I feel I have to speak out here as I am deeply offended and upset. Firstly, I asked before I went on what was expected of me as there were still a few children left.

‘I am far from homophobic I’ve stood on picket lines and lobbying for Gay rights for 30 years. I am definitely not Islamaphobic as I was married to a Muslim who sadly passed away.’

Ms Jones added: ‘I did the event free of charge and did what was asked of me. I do intend to seek legal advice with regards to this.

‘Lastly I had selfies with the children after the show and we were outside doing the lambada together afterwards.’

Organisers posted on Facebook: ‘Rhondda Pride would like to apologise for any offence caused by Just Deb at Rhondda Pride yesterday. There were repeated warnings on stage across the event.

‘We made it abundantly clear via social media that the event was only family friendly until 6pm. Families were encouraged to leave before 6pm and the Wales Online article also stipulated that after 6pm more adult orientated acts would be on stage.

‘Unfortunately no one has the power to control what any of their acts do onstage and if anything inappropriate was said or happened then we apologise for any offence.

‘We will ensure that steps are taken next year to ensure that these problems do not happen again. I am happy to personally speak to anyone who has feedback regarding this matter and we can all move forwards from there.’