Premature twin boys who were born on the abortion limit, weighing just over 1lb each, have defied the odds after doctors told their parents to prepare for the worst.

Luci Hall and Joseph Barker, both 26, were terrified when their sons Charlie and Harvey Barker were born at just 24 weeks in May 2017, weighing 1lb 6oz and 1lb 4oz, respectively.

Medics told the couple not to plan any sort of future for the boys, who could fit into the palm of their mother’s hand. Yet, 15 months on, the brothers from Leeds have defied doctors’ expectations.

Ms Hall said: ‘Seeing how well they’ve done does make you think about the abortion limit. The thought of anyone getting rid of a baby that late is just awful.

‘Harvey and Charlie are proof that a baby born at 24 weeks can survive. They are both little fighters, they proved everyone wrong’.

Abortion laws in the UK allow the procedure to be carried out up to the end of the 24th week of pregnancy. Certain circumstances, such as the mother’s life being at risk, can permit later terminations.

The Royal College of Midwives has argued for women in the UK to be allowed an abortion at any point during pregnancy.

Premature twin brothers Charlie (left) and Harvey Barker were born on the abortion limit at 24 weeks, weighing just over 1lb each. Doctors told their parents to prepare for the worst 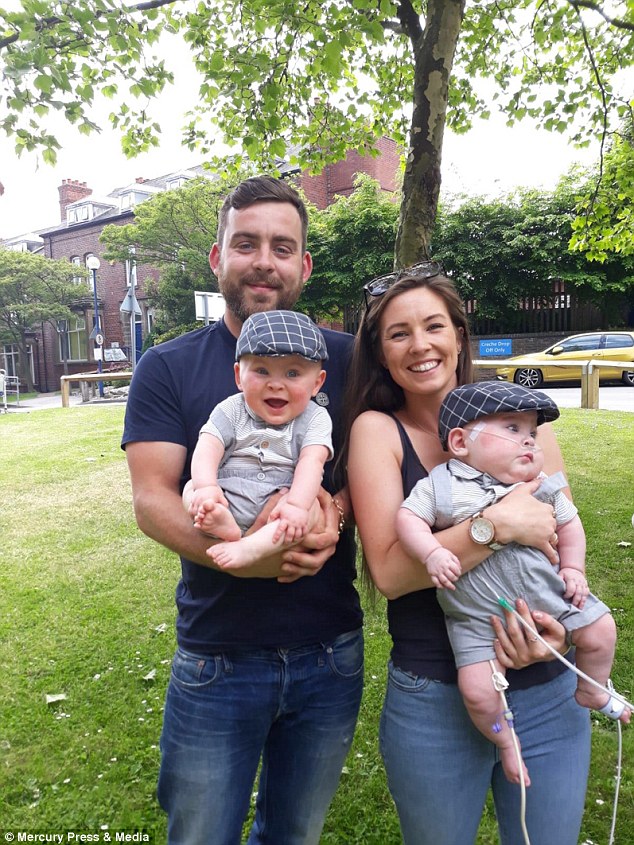 Fifteen months on, the brothers have defied medics’ expectations and are thriving, which has caused their mother Luci Hall (pictured holding Harvey with her partner Joseph Barker and other son Charlie) to question the UK’s 24-week cut off point for pregnancy terminations 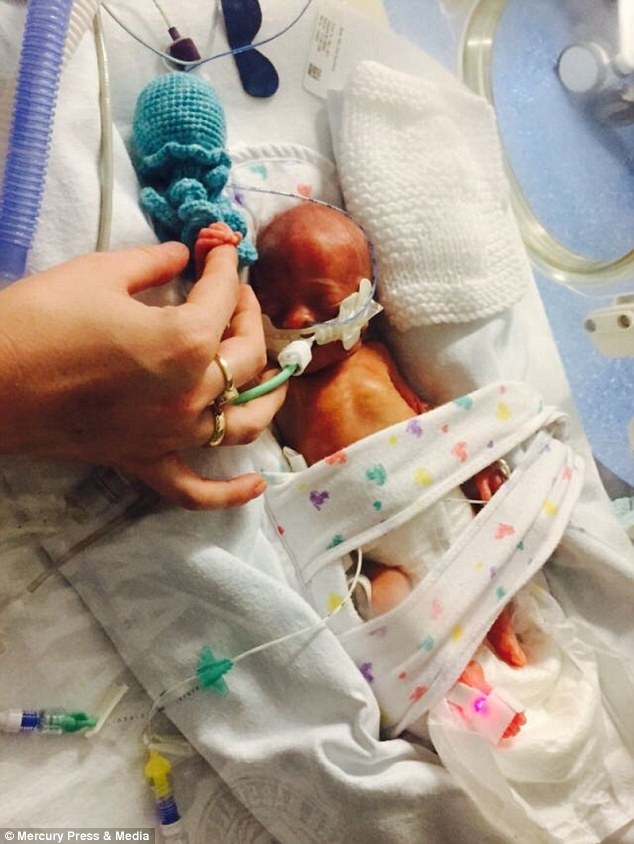 ‘We didn’t know if they were going to survive’

Speaking of the birth, Ms Hall said: ‘When I went into labour, Joseph and I just weren’t prepared at all. It all happened so quickly.

‘It was so early and we were so worried about what was going to happen to them. We didn’t know if they were going to survive, it was terrifying.

‘When they were born they were both rushed straight to intensive care, I didn’t get to hold them or see them. Joseph just got to quickly take two photos.

‘I couldn’t even get upset about not getting to hold them because I was in shock. I couldn’t quite get my head around what was happening.

‘We got to see them three hours later and that’s when it really hit us. They were so tiny, you can’t even imagine a baby that small. It was really frightening.’ 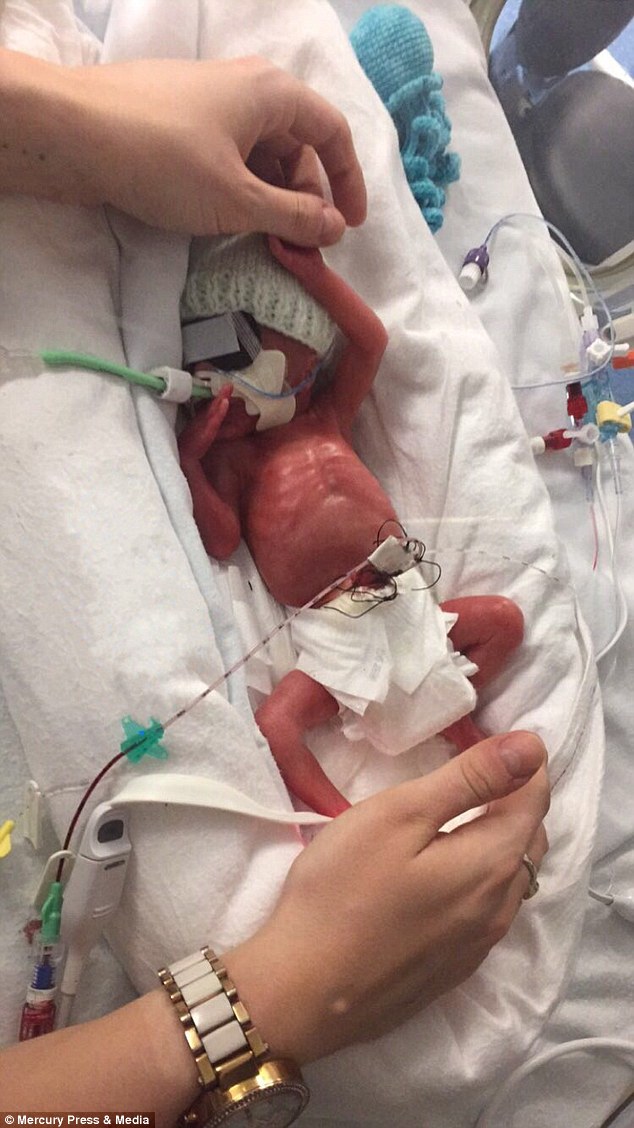 After being born, the brothers (Charlie pictured) were rushed to intensive care, with doctors telling their parents to just take it hour by hour. The shock of how premature their sons really were did not hit the couple until they were allowed to see them three hours later 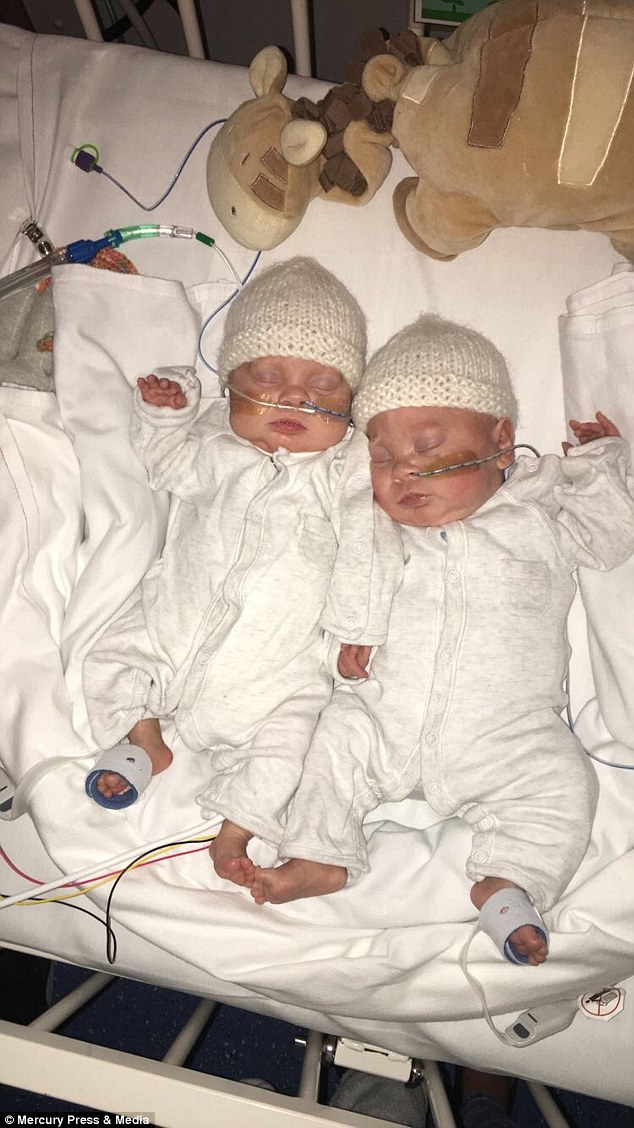 Charlie and Harvey spent four-and-a-half months in hospital undergoing countless tests, scans and transfusions while their ‘helpless’ parents longed for the day they could take them home

‘They are both little fighters, they proved everyone wrong’

The couple then received the devastating news that their sons would likely not make it.

Ms Hall, who gave up her admin job to care for her sons, said: ‘Their chances of survival were so slim that we were told to take it hour by hour. They told us not to think about the future because it was so uncertain.

‘We were so scared thinking about losing one of them or both of them, it was devastating. It’s not a situation you ever expect yourself to be in when you have your first baby.

‘People think of premature babies in incubators but it’s not just that, it’s the incubator and oxygen machines and wires and head scans and eye scans.

‘Charlie and Harvey had seven blood transfusions each, they both had bronchiolitis. They have been through so much.

‘We were watching our babies fighting for their lives. You can’t explain what it’s like to be in that situation, it’s horrendous. It’s like your worst nightmare, I felt so helpless.

‘All I wanted to do was hold them and comfort them but I couldn’t do anything. All I could do was be there every day.’

Despite doctors’ expectations, the brothers gradually got stronger, with their parents finally being able to hold them after four weeks.

Ms Hall said: ‘It gave us both so much hope because we knew then that they were getting stronger. That really kept us positive.

‘They are both little fighters, they proved everyone wrong.’

‘After everything we’ve been through, it is incredible for us to have our family at home and to be able to spend time together and enjoy it.’ 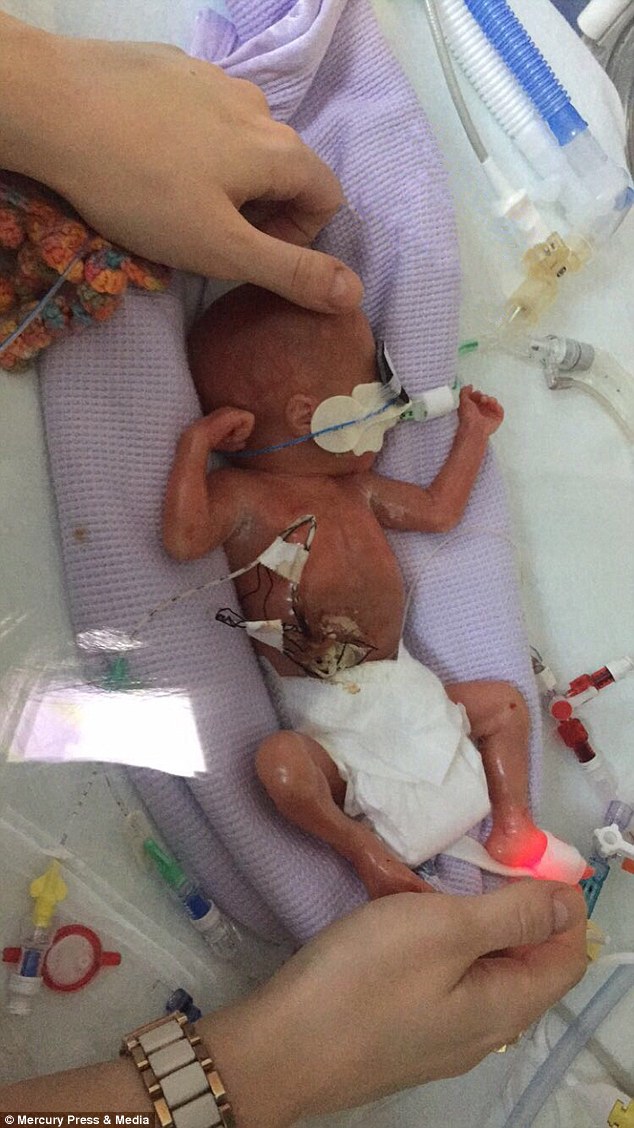 As well as incubators, the brothers (Harvey pictured) were attached to oxygen machines and wires, and had to undergo head and eye scans. Ms Hall described the ordeal as ‘terrifying’ 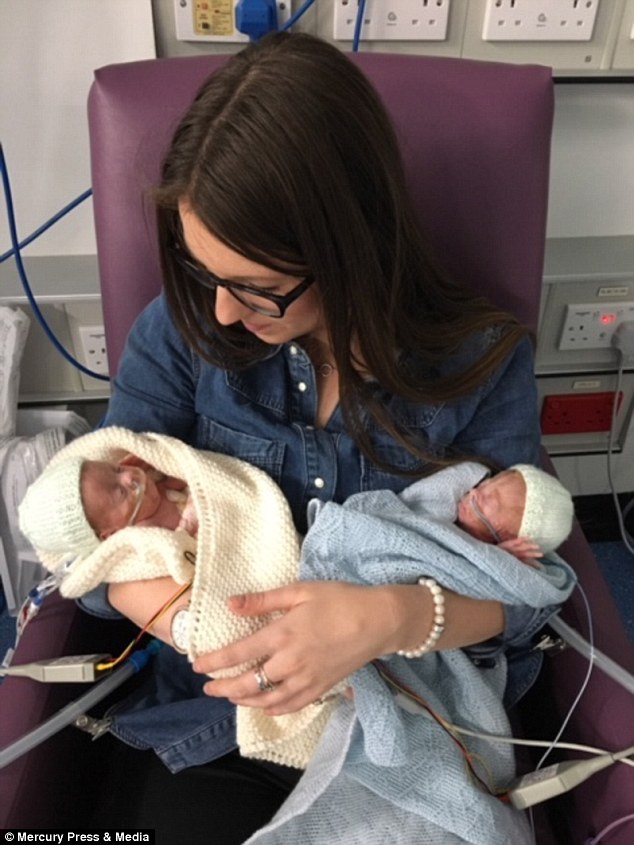 After a long hospital stay the brothers were finally discharged on on September 24, however, Harvey had to be readmitted on October 31 when he stopped breathing at home 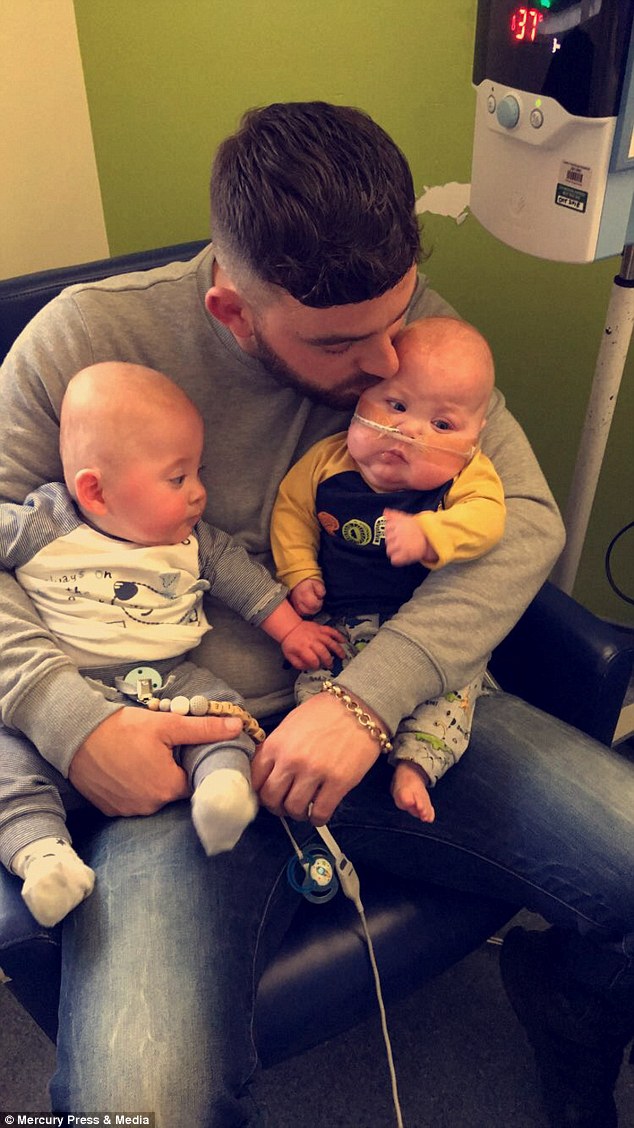 Harvey (right) had such weak lungs he was not receiving enough oxygen and had to be rushed to hospital, where he spent the best part of the first year of his life

Speaking of her sons’ progress, Ms Hall said: ‘Every day Joseph and I are shocked and amazed by how incredibly they’re both doing.

‘I am the proudest mum in the world and everything we’ve had to go through just makes me appreciate my boys so much more.

‘Seeing how well they’ve done does make you think about the abortion limit. I’d never even considered it before, I just accepted it.

‘Then the twins came and I saw them in their incubator and suddenly the idea of a baby being aborted at 24 weeks broke my heart.

‘The thought of anyone getting rid of a baby that late is just awful. When I came home I signed a petition to have it changed.’ 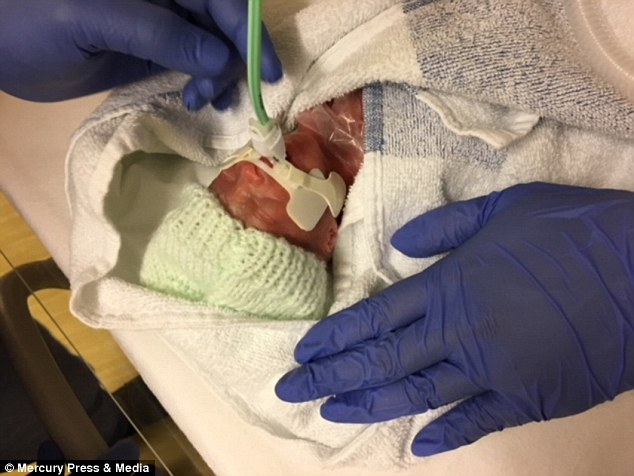 The couple could not see or hold the boys initially, with their father quickly taking two photographs of them before they were taken away (pictured: the first photo of Harvey) 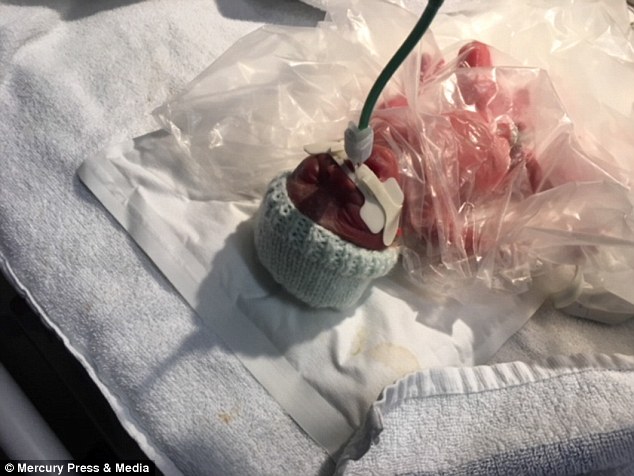 Pictured is the first photo of Charlie. Ms Hall claims she watched her sons fight for their lives 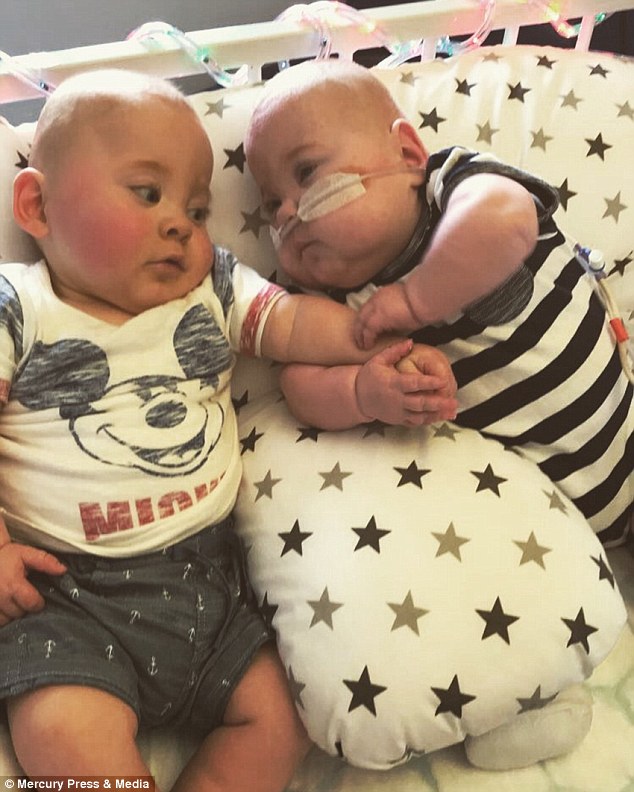 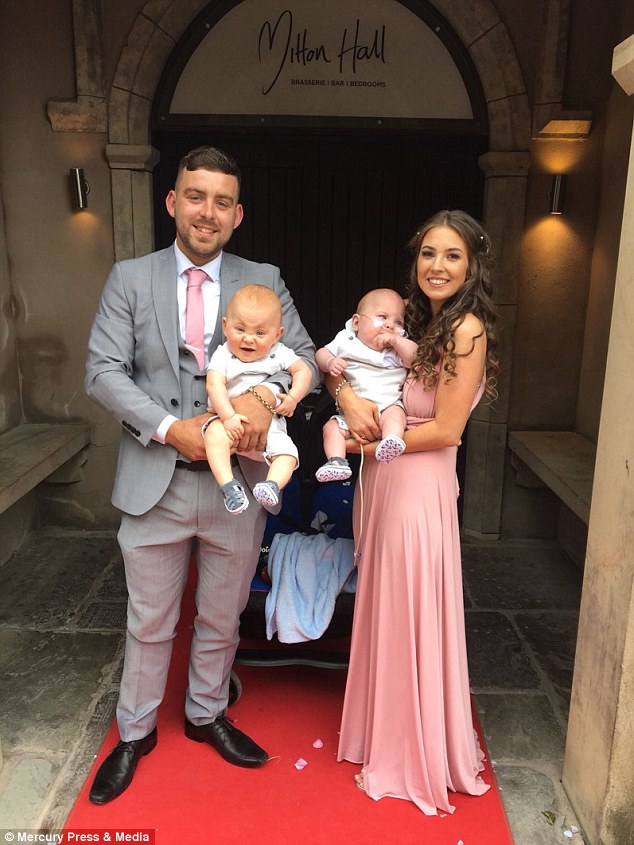 ‘My whole pregnancy was a nightmare’

The couple, who have been together for almost five years, discovered they were expecting a baby when Ms Hall was six weeks pregnant, with the 12-week scan revealing it was twins.

Throughout her pregnancy, Ms Hall was forced to have weekly ultrasounds due to the babies having a rare condition known as twin-to-twin transfusion, which causes uneven blood flow and meant Charlie was getting more nutrition than his brother.

Ms Hall said: ‘My whole pregnancy was a nightmare. It wasn’t what I had imagined when I dreamed of starting a family.’

Already coming to terms with that diagnosis, things took a turn for the worst when Ms Hall’s waters broke at just 20 weeks. She was rushed to hospital but did not give birth until four weeks later on May 21 last year.

Charlie and Harvey spent four-and-a-half months in hospital undergoing countless tests, scans and transfusions while their ‘helpless’ parents longed for the day they could finally take them home. 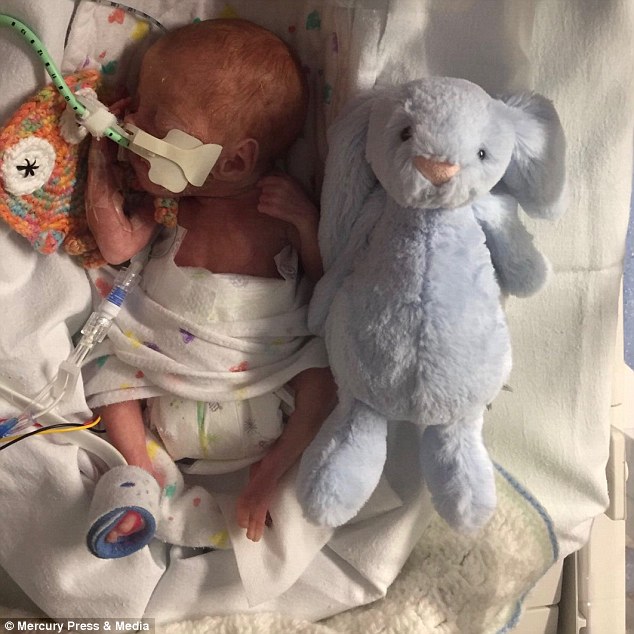 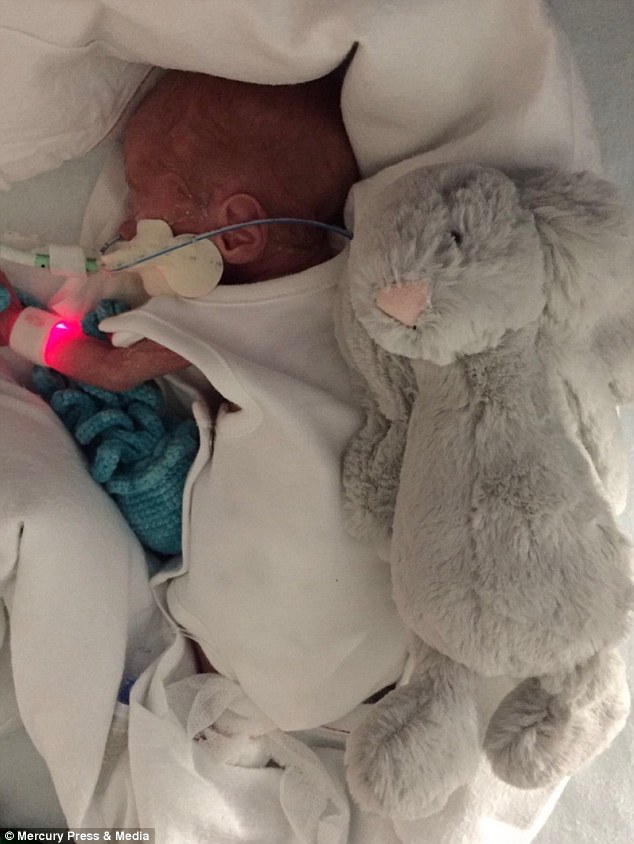 Their minute size left their parents clueless as to their futures, which was difficult to accept 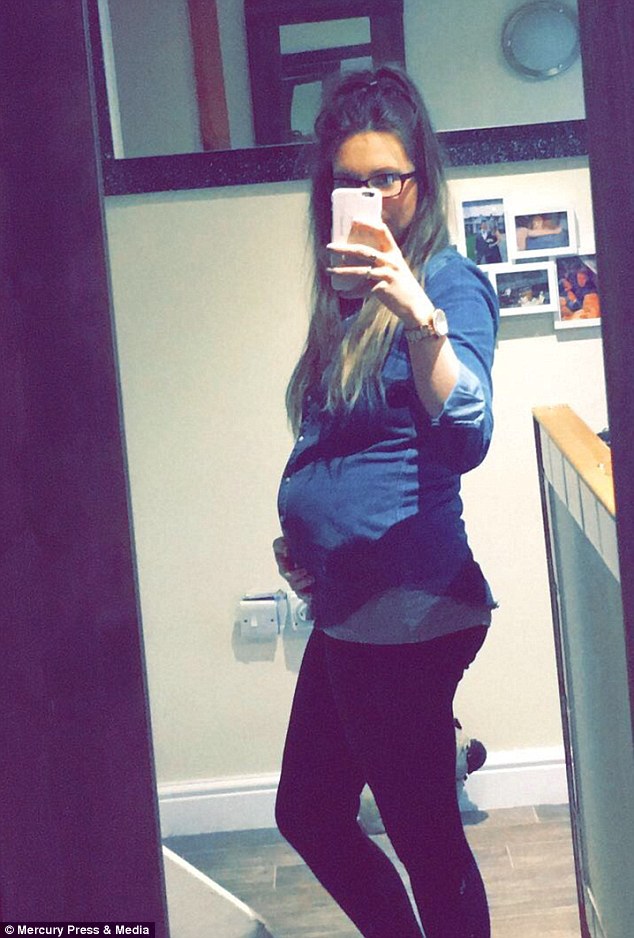 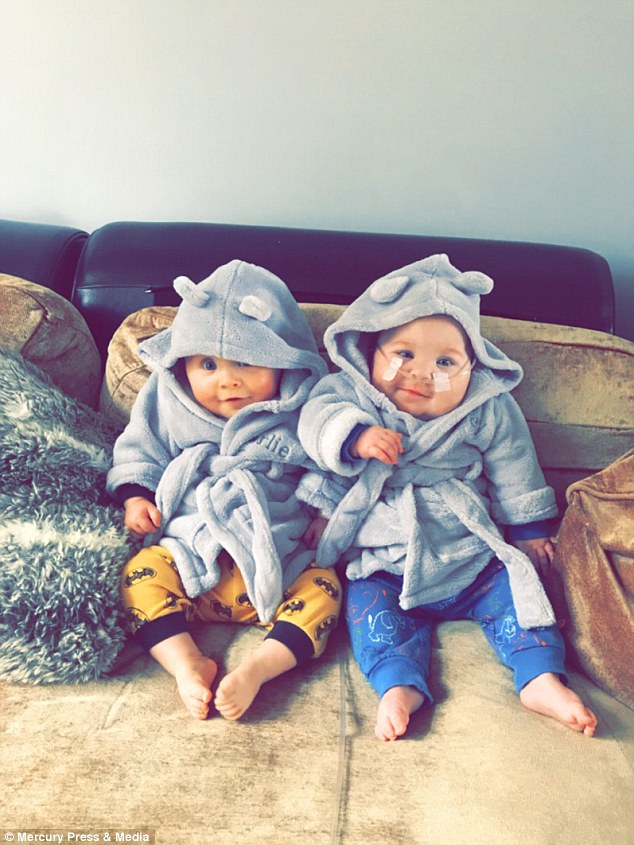 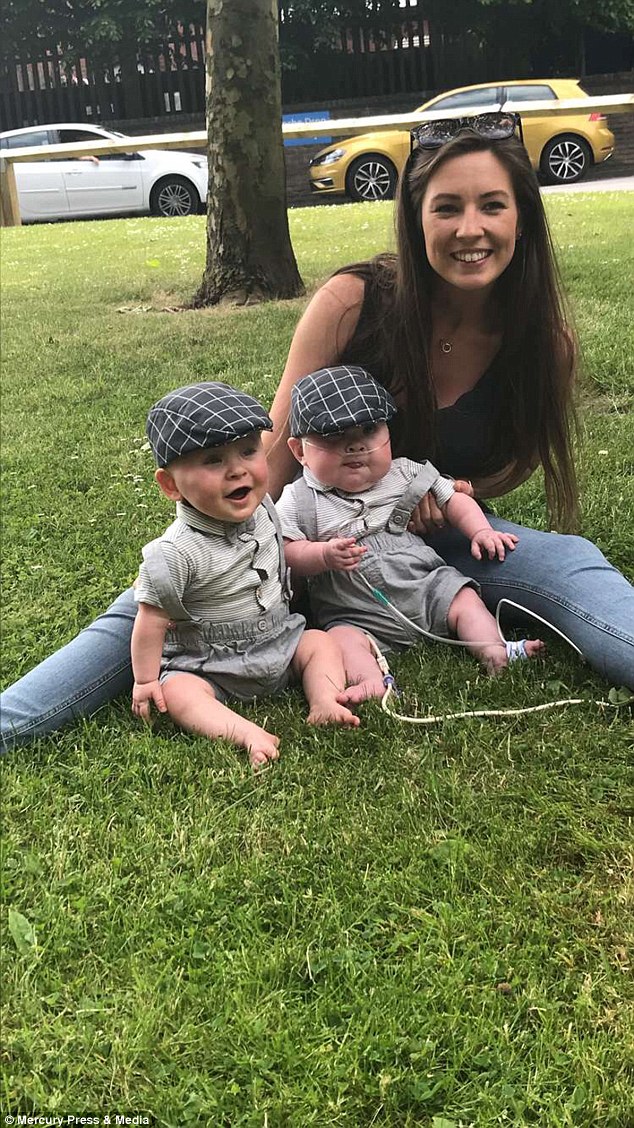 Harvey spent ‘the first year of his life’ in hospital

The brothers were finally discharged on September 24, however, Harvey had to be readmitted on October 31.

Ms Hall said: ‘When we took them home we thought all of that was finally over but on Halloween Harvey went downhill really quickly.

‘We called an ambulance and he was blue lighted to hospital. He stopped breathing, it was so frightening.

‘His lungs were just so weak that his body wasn’t getting enough oxygen and the lack of oxygen meant he had become visually impaired.

‘Harvey had to stay in hospital for such a long time, basically the first year of his life. He was so poorly but I couldn’t be with him all the time because I had Charlie at home.

‘It was awful and separating the boys was heartbreaking. They had been together every step of the way and tearing them apart was horrendous.’

After spending the best part of a year in hospital, Harvey, who weighs 20lbs 8oz, finally went home for good on May 29 this year and is now going from strength-to-strength, even overtaking his brother at 20lbs. Both wear clothes for nine-month-olds.