Ousted Catalan leader may set up a ‘government in exile’

Ousted Catalan leader Carles Puigdemont has said he wants to ‘avoid violence’ in Spain, but that the government is ‘carrying out an offensive’ in Catalonia.

The ex-President, who dramatically fled to Brussels yesterday, made the statement during a press conference in the Belgian capital at midday.

Mr Puigdemont, who Spanish prosecutors accuse of sedition, rebellion and embezzlement, said ‘dialogue and moderation always has to prevail’.

Spain’s Supreme Court has today said it has agreed to hear the case brought against Mr Puidgemont and other ousted Catalan separatist lawmakers.

Running away: Carles Puigdemont, pictured arriving at the press conference today fled to Brussels and is rumoured to be setting up a ‘government in exile’ in the Belgian capital

It comes as  a former president of Catalonia accused Mr Puigdemont and his fellow fugitive ministers of ‘selling the Catalan people something false’ by declaring independence then fleeing to Brussels.

José Montilla Aguilera said to Catalan TV: ‘Where are the representatives of the [Catalan] government now? They have to show their faces. They have endangered our institutions.’

He added: ‘They played with the people. They sold them something that was false.’

‘You only had to look at the faces of Puigdemont and [vice president] Junqueras proclaiming the Republic. They knew it was a farce.’

He added: ‘I told the president that he knew that nobody in Europe would recognise them.’ 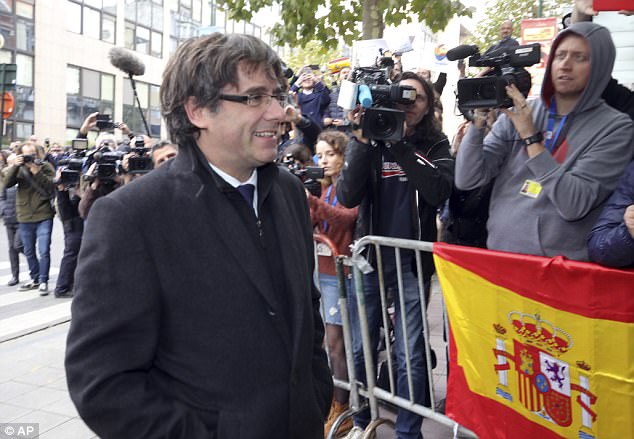 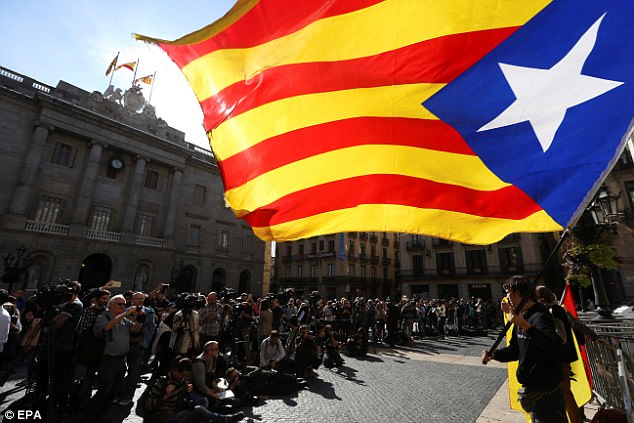 Back to normal? A demonstrator waves a Catalonian pro-independence ‘estelada’ flag outside Palau de la Generalitat, the Catalonian regional Government Palace, in the first working day after the implementation of the Spanish Constitution’s article 155, in Barcelona on Monday

Miquel Iqueta, a Catalan Socialist MP, said he had ‘warned [Mr Puigdemont and his associates] of the risks of violating the law. They knew what they were exposed to. The most fervent of separatists must recognise that this has ended badly.’

Mr Puigdemont’s Catalan lawyer, Jaume Alonso-Cuevillas, appeared to concede this point when he told Catalan media: ‘Declaring independence is useless if you do not have the strength to exercise what you have declared.’

This evening, the Spanish government will convene an extraordinary meeting to discuss Madrid’s response to Mr Puigemont’s unexpected departure from the country.

Mr Puigdemont has also appointed a Belgian lawyer Paul Bekaert, who defended ETA terrorists fighting for the indolence of the Basque region, allegedly to help him seek asylum.

Mr Bekaert, a human rights specialist, worked on numerous cases seeking to block the extradition of ETA members to Spain in the Nineties, when many militants fled Spain to Belgium.

‘I can confirm that Puigdemont has contacted me today,’ Mr Bekaert said.

‘I cannot say what he asked me because of professional confidentiality. Nothing has been decided about the asylum request. Tomorrow there will be a hearing on the subject.’ 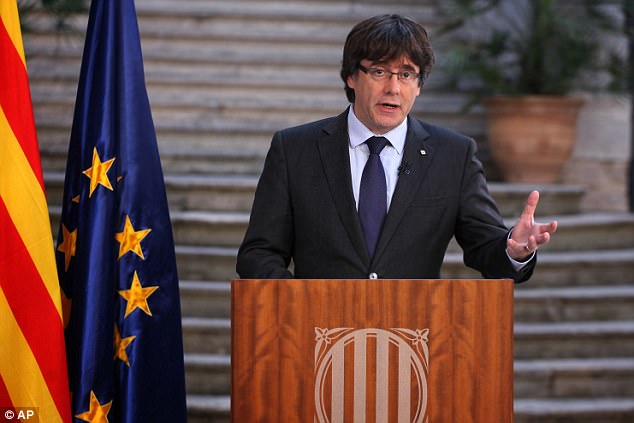 Time to explain:  Carles Puigdemont, who Spanish prosecutors accuse of sedition, rebellion and embezzlement, is expected to make a statement from Belgium

Interpol is currently reluctant to get involved with a possible extradition because its charter forbids it to intervene in political cases, MailOnline understands.

Meanwhile, Spain’s Civil Guard police force searched the headquarters of Catalonia’s regional police, the Mossos d’Esquadra, in a probe into the independence referendum on October 1.

‘We’re carrying out an inspection related to the Mossos d’Esquadra’s communications on the day of the illegal referendum on October 1,’ the Civil Guard spokesman said.

He said officers were searching the headquarters in Sabadell, a city in Catalonia, and other offices.

The Mossos were tasked with stopping the ballot, which had been deemed illegal by Spain’s Constitutional Court.

But senior Mossos officers issued orders not to use force, and agents steered clear of clashes with activists gathered in large numbers to protect voting stations.

Members of the national police intervened instead, seizing ballot boxes in a clampdown marred by violence against civilians.

The Mossos have since been criticised for not closing down polling stations as they had been asked to. They retorted that they shut as many as they could.

Last night, members of the radical separatist party CUP were seen among about one thousand masked anti-fascist demonstrators who faced off against nationalist protesters on the streets of Barcelona.

Graffiti was painted on buses, traffic was halted and cars were attacked as riot police struggled to contain the two groups.

The divisive French far-right politician Jean-Marie Le Pen waded into the debate, tweeting a call for Spanish unity that was seen as echoing the Franco era. ‘Spain, one, great, free!’ he wrote in Spanish.

Echoing comments made by a number of distinguished former judges in Spain, Mr Puigdemont’s Catalan lawyer Jaume Alonso-Cuevillas, said the politician could not be found guilty because he did not instigate violence. 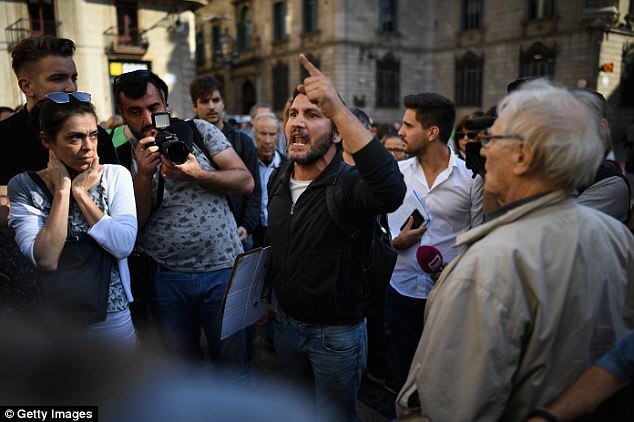 Mr Alonso-Cuevillas, described the allegations as a ‘flagrant abuse’ of the legal system.

The lawyer had dinner with Mr Puigdemont in his hometown of Sant Julià de Ramis, about an hour from Barcelona, on Sunday, before he left the country, it was revealed.

Mr Puigdemont is due to make a speech later today to explain to the world why he slipped out of the country despite having vowed to ‘peacefully resist’ Madrid.

It is thought that the ousted leader and the five ministers who accompanied him to Belgium are planning to apply for asylum, though local media has reported that he may be considering a return to Catalonia after the snap elections on December 21st.

Over the weekend, the Belgian immigration minister suggested that he was considering granting asylum to the former Catalan leader, but his words were slapped down by the country’s prime minister, Charles Michel.

The asylum application is reportedly to be considered by an independent legal authority rather than Belgian government officials, a prominent immigration lawyer said, underlining that it will be a ‘legal and not political’ decision. She added that the outcome of the application should be revealed in ‘a few days’.

Belgium is one of the few countries that resisted a clause in the Lisbon treaty that would prohibit European member states from offering asylum to other EU citizens.

Yesterday it emerged that the charges of sedition, rebellion and embezzlement against Mr Puigdemont and other senior officials will be handled by the same judge who jailed Jordi Sanchez and Jordi Cuixart, two prominent Catalan leaders imprisoned two weeks ago.