Olivia Parslow (pictured) was 12-years-old when she was diagnosed with ovarian cancer, a disease normally found in women over 50

When 12-year-old Olivia Parslow rapidly put on so much weight that her school uniform would no longer fit, her mother Beki knew she had to see a doctor.

But nothing could prepare the mother-of-two for the diagnosis that was to follow – her daughter was told she had ovarian cancer making her one of the youngest in the world to suffer from the disease normally found in women over 50.

Olivia needed to have her left ovary removed – but she is now in remission and doctors are hopeful she could one day have children.

Ovarian cancer is the sixth most common cancer among British women, with more than 7,400 new cases each year. Just 0.2 per cent of sufferers are 14 or under.

Olivia was yet to start her periods when she first began to develop symptoms in October 2016 – putting on nearly three stone in just three weeks.

‘As a family, we started cracking jokes about her watching what she eats… But we were trying not to make too big a deal of it.’

When she realised Olivia’s tummy was growing despite not eating much, Mrs Parslow of Bognor Regis, West Sussex, took her to see the family GP who immediately sent the youngster to St Richard’s Hospital in Chichester.

Initial tests were inconclusive but and MRI revealed something on her Olivia’s left ovary.

Mrs Parslow said: ‘We were sent by ambulance to Southampton General Hospital, where they prepared us for the worst. 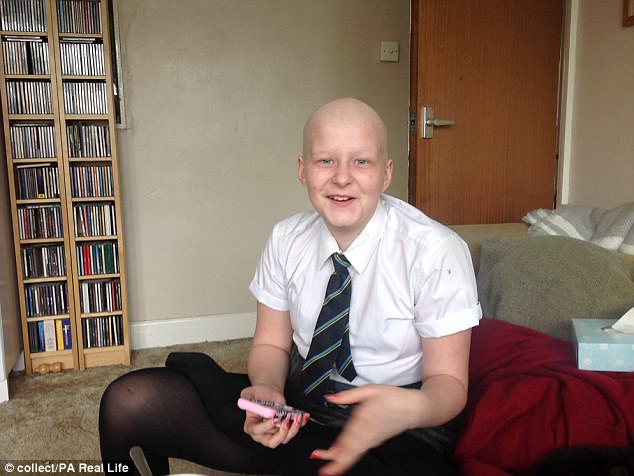 Olivia lives with her family in Bognor Regis, West Sussex and she lost a third of her body weight during the treatment

‘They didn’t know what they were going to find when they opened her up and we wondered if she was riddled with cancer,’ Mrs Parslow, a reiki healer, added. Olivia had to have her left ovary removed and had several litres of fluid drained from her body. 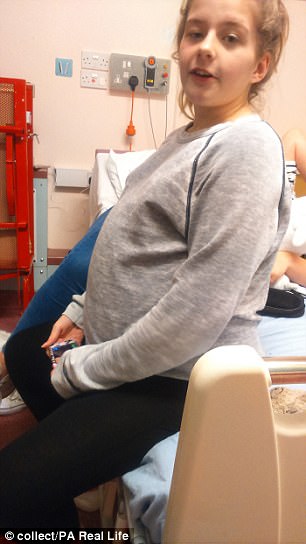 This reduced her body weight by a third taking her down from the 12-and-half stone she had become to eight-and-a-half stone.

After a biopsy was performed on the tumour two weeks later in December 2016, Olivia returned to Southampton hospital for a diagnosis. ‘The diagnosis was stage 1C juvenile granulosa cell tumour, extremely rare and something they hadn’t seen before,’ said Mrs Parslow.

‘Thankfully they found no evidence of cancer anywhere else,’ said Mrs Parslow.

The week before Christmas, Olivia started treatment. ‘She had four rounds of chemotherapy and lost her hair, which was tough,’ her mother said.

‘It made her extremely ill but, in April 2017, we were told she was in remission.’

Amazingly between her first and second rounds of chemotherapy – and despite having only one ovary – Olivia started her first period in January 2017.

This means she is likely to be able to have children in the future, although she has been warned to try to conceive before she reaches 30, as her fertility could, potentially, have been affected. 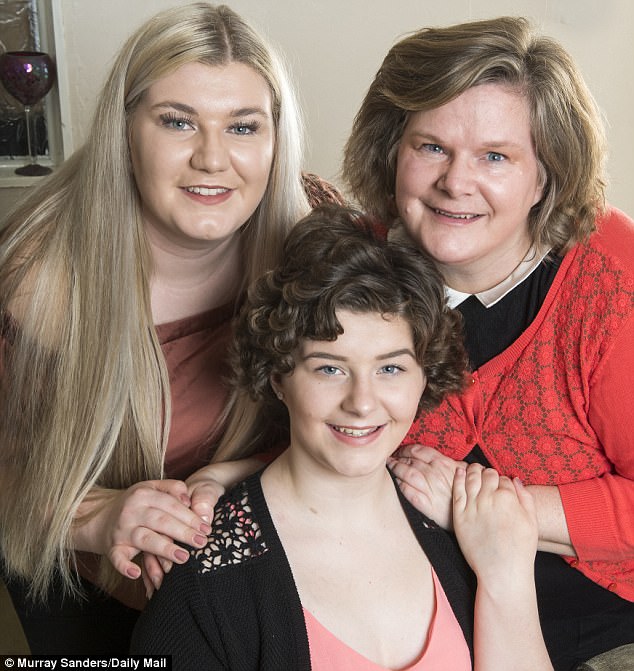 Olivia, now 13, pictured with her older sister Charlotte, 19, and her mother Beki at their home in Bognor Regis, West Sussex

Mrs Parslow said: ‘It’s certainly been a tough year, but she’s come through it and so have we,’ added Mrs Parslow. A spokesman for the Ovarian Action Trust said: ‘The risk of developing ovarian cancer increases as a woman gets older. Although it is not common, 1,000 women under the age of 50 develop ovarian cancer every year, which is why it is important that all women should be aware of it.

‘This is especially important if women have a family history of ovarian or breast cancer.’

The youngest case of ovarian cancer is believed to be that of Olivia-Grace Steele from Oxford who first showed symptoms at ten days old.

Ovarian cancer is the sixth most common cancer among British women, with more than 7,400 new cases each year and 4,100 women dying as a result.

It mainly affects those who have been through the menopause, with 82 per cent of cases among women over the age of 50.

Cases among children are rare and just 16 girls are diagnosed before the age of 15 in Britain each year – less than 0.2 per cent of all cases. Only 35 per cent of women with ovarian cancer survive ten years after diagnosis.

Survival rates are poor because three-quarters of women are diagnosed once the cancer has already spread.

This is partly because the hallmark symptoms – bloating, a swollen tummy and needing to urinate a lot – are often mistaken for other conditions such as irritable bowel syndrome.