By Nicole Conner and Bhvishya Patel For Mailonline

A 17-year-old who died after being stabbed in ‘broad daylight’ on London’s Oxford Street has been named by police.

Jeremy Menesses, from South London, was rushed to a hospital in central London with a stab injury following a fight between a number of men on Saturday evening.

Police partially closed Oxford Street after emergency services responded to the scene just after 5:30pm to reports of an assault on Market Place at the junction with Oxford Street.

Despite the efforts of the emergency services, Mr Menesses was later pronounced dead at 7:33 pm.

The teenager’s next of kin have been informed by the police, who confirmed that a post-mortem examination would be carried out in due course.

Following the attack, three men, all aged 18, were later arrested after arriving to a south London hospital with stab injuries. They have since left hospital and are now in custody.

Jeremy Menesses, from South London, died after he was stabbed on London’s Oxford Street on Saturday evening 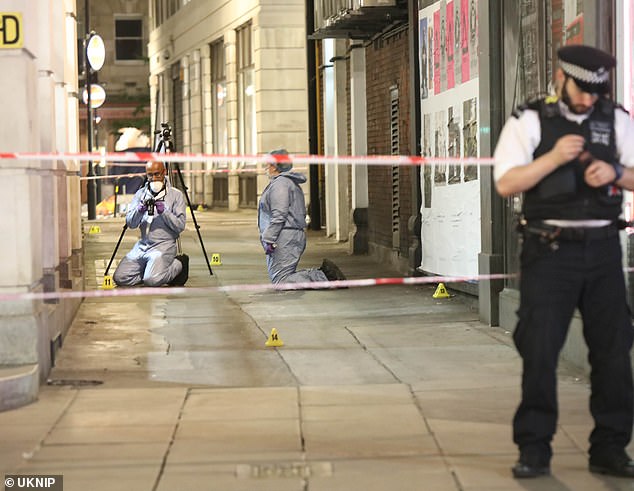 Pictured: Forensic teams carry out investigations after the attack on Saturday evening 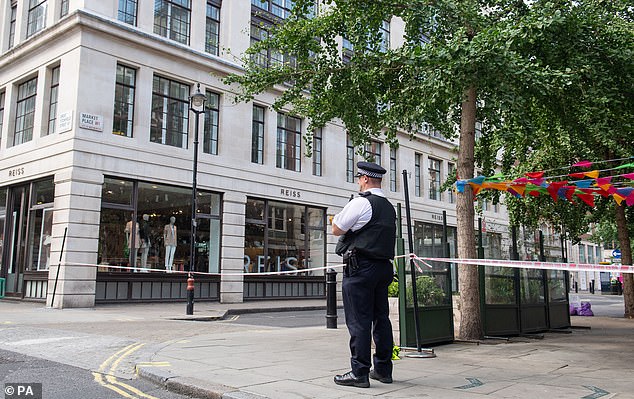 Shoppers watched on in horror as the police and ambulance service rushed to the teen’s aid. Pictured: Police at the scene today 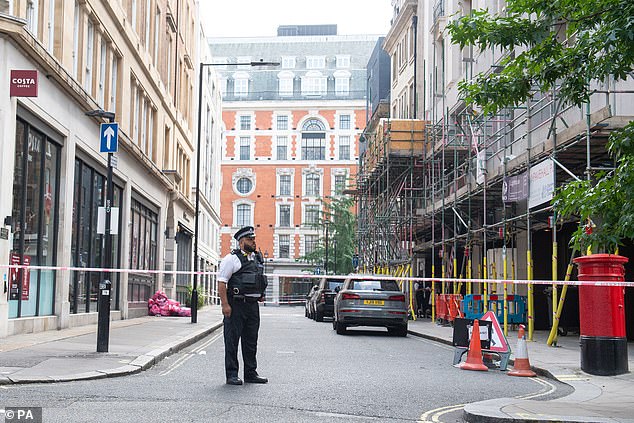 A police cordon is put up on Market Place, off Oxford Street on Saturday, after the teenager was stabbed 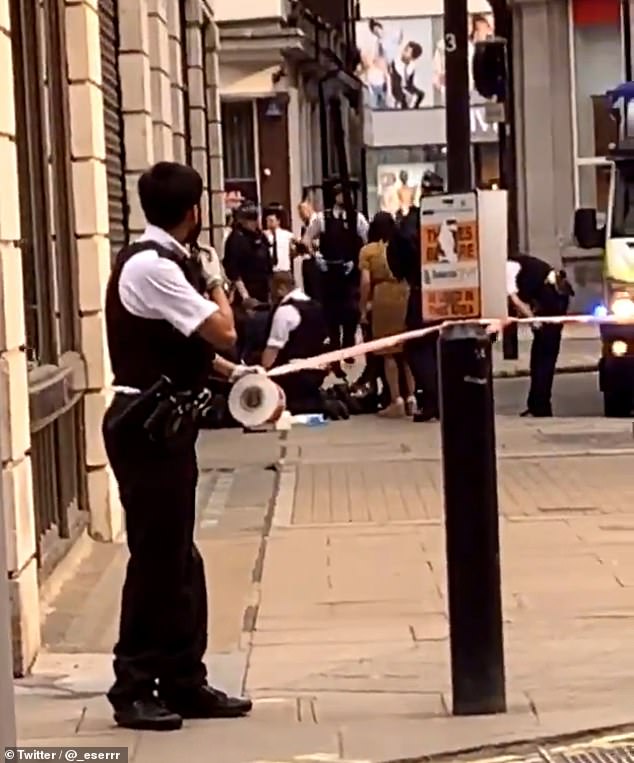 Police confirmed a man had been stabbed, after a person was seen to be lying on the ground on Saturday

Yesterday, onlookers watched in horror as the police and ambulance service rushed to the teenager’s aid.

Some Twitter users took to social media to say they saw him being chased by another person with a machete.

The famous shopping street was closed to traffic at the junction of Great Portland Street.

Following the incident, Detective Chief Inspector Katherine Goodwin said: ‘This attack took place following a fight between a number of males in broad daylight and was witnessed by a large number of horrified onlookers.

‘We have spoken to a number of people already but need anyone who has information, video or images to speak to us and tell us what they know. Your assistance could prove vital as we investigate this terrible incident.’ 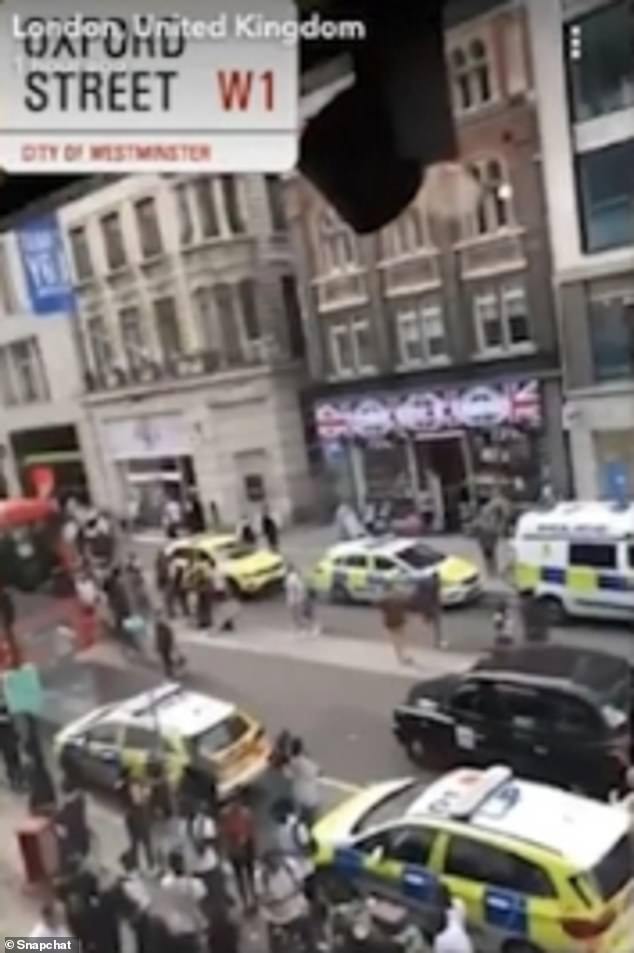 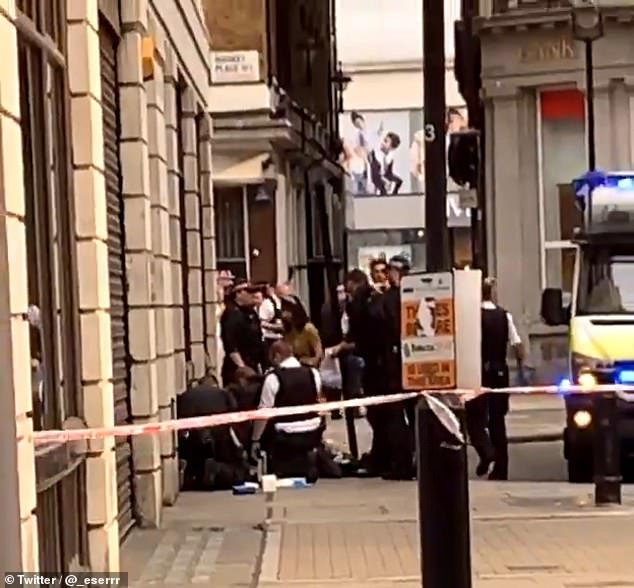 Emergency services responded to the scene just after 5:30pm to reports of an assault on Market Place at the junction with Oxford Street 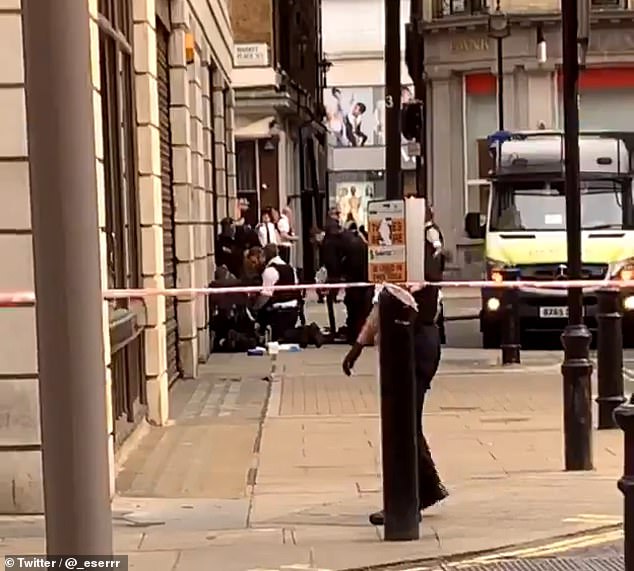 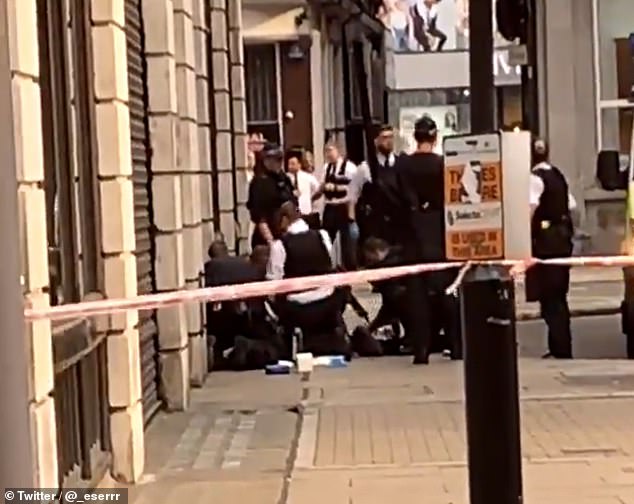 Meanwhile Superintendent Rob Shepherd, from the Central West BCU, said: ‘Residents and visitors will see an increased police presence in the area following this shocking incident.

‘We are doing everything we can to support our Specialist Crime colleagues as they continue their investigation and urge anyone with information to approach officers on the street if they have information that they would like to share with us, or call 101.’

A London Ambulance Service spokesperson said: ‘We dispatched two ambulance crews, an incident response officer and a medic in a car to the scene. We also dispatched a London’s Air Ambulance trauma team.

‘We treated a person at the scene and took them to a major trauma centre.’

Anyone with information is asked to call police via 101 quoting reference Cad 6404/08Aug.