Pandemic predators a threat to 200 UK firms: Household names like M&S, Sainsbury’s and ITV could be targeted by end of year, say City analysts

More than 200 companies listed on the UK stock market are vulnerable to predators as private equity scours Britain for takeover deals, according to City analysts.

In a 60-page report, broking firm Canaccord Genuity warned that a string of households names including Marks & Spencer, Sainsbury’s, Vodafone and ITV could become bid targets before the end of the year.

The fresh analysis comes as private equity giants swoop on financially sound companies whose value has been depressed by the coronavirus crisis, in an attempt to buy them on the cheap.

The feeding frenzy has been described as ‘pandemic plundering’.

So far this year buyout firms have spent £23.3billion buying 113 British companies – the fastest pace of deal making since 2007.

Firms that have been targeted since Covid-19 struck include supermarkets Asda and Morrisons, security firm G4S and the AA.

In the report, Canaccord said that the second half of this year was likely to be ‘just as frenzied’ as the first, as share prices are still ‘depressed’.

Canaccord analyst Graham Simpson said: ‘The deals are getting bigger and bolder.

The boss of Upper Crust owner SSP Group is quitting for private equity after just two years in the job.

The company’s pandemic nightmare continued as Simon Smith, 49, said he will leave by the end of the year.

SSP outlets at railway stations and airports were hammered by the pandemic and around 4,000 jobs were axed.

At one stage, just ten of its 580 UK sites were open, eight of them in hospitals.

Jamie Rollo, analyst at Morgan Stanley, said: ‘It is clearly unexpected and disappointing news, as his predecessor Kate Swann left in May 2019.’

SSP said business is picking up as lockdown restrictions ease, with trading last week at 42 per cent of 2019 levels.

‘It won’t stop as we are trading at a discount to global markets. It is concerning.’

Canaccord identifies more than 200 companies that could become takeover targets.

Within this, it highlighted 65 ‘top picks’ which it described as ‘low-hanging fruit’ for predators.

These companies appear particularly attractive to bidders as they would provide ‘much-needed growth without having to go through a restructuring or refinancing,’ according to Canaccord.

‘It is unprecedented and shows the true extent of the UK plc undervaluation relative to global peers in our view.

‘We believe UK plc valuations continue to be very attractive so we don’t expect the current trend to abate.’

In recent weeks there has been a fight-back against the plundering, with politicians on both sides of Parliament urging the Government to step in.

The Daily Mail has highlighted the problem and on Monday a string of Tory MPs as well as Labour’s Ed Miliband publicly backed this paper’s campaign.

With pressure building, Business Secretary Kwasi Kwarteng will meet Morrisons chief executive David Potts tomorrow to demand that he explain his rationale for backing the £6.3bn bid from a consortium headed by Fortress private equity.

But Simpson, who wrote the Canaccord report, wants to see more shareholders, and in particular City fund managers, stand up to the predators and vote against the deals.

And two weeks ago Legal & General Investment Management slated the Fortress bid for Morrisons, saying that the takeover was taking place for all the ‘wrong reasons’.

Simpson said the mounting concerns should at the very least result in higher offers, rather than the current spate of low-ball bids.

He said: ‘We may see higher initial bids now that institutional investors are starting to push back publicly. That may also prompt private equity firms to increase their initial offers, as low, opportunistic offers can antagonise managements and investors.

‘We might also expect management teams to hold out instead of recommending the first offer that comes along.’

Supermarket giant Morrisons is worth £7.6billion and the board should have held out for more cash, according to analysts.

It accepted a 252p a share offer from US buyout giant Fortress this month that valued it at £6.3billion.

But the Canaccord Genuity report puts a 314p-a-share, or £7.6billion, price tag on Morrisons – fuelling concerns that the board caved in too early. 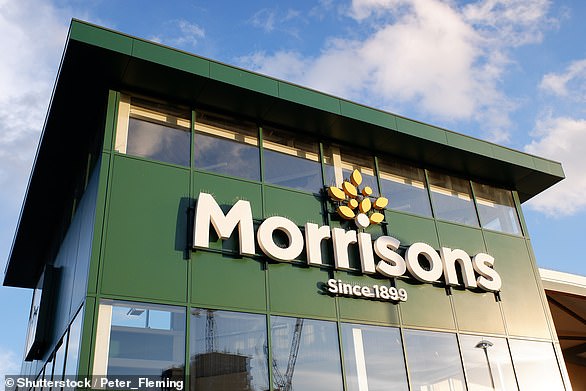 The Canaccord Genuity report puts a £7.6bn, price tag on Morrisons – fuelling concerns that the board caved in too early

With rival suitors circling – including private equity firm Clayton, Dubilier & Rice which had a 230p a share bid rejected last month – a higher offer could materialise.

Graham Simpson, at Canaccord Genuity, said: ‘The fact that the share price is above the 252p recommended offer tells us the market also expects a higher offer.

The uncomfortable question for Morrison management is ‘Why did they accept 252p?’