A Christmas market has been labelled by some as ‘the worst ever’ after leaving many parents and children disappointed.

Swansea’s annual festivities saw scores of people gather in the city centre on Sunday afternoon before the main event got underway at 5pm.

However following the underwhelming spectacle many have since taken to social media to complain about the disappointing number of floats included in the parade. 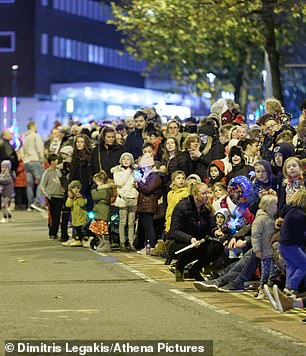 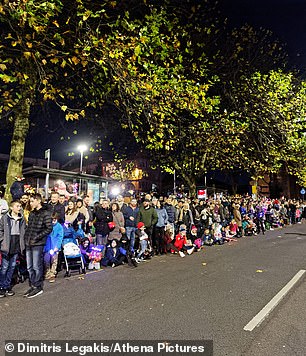 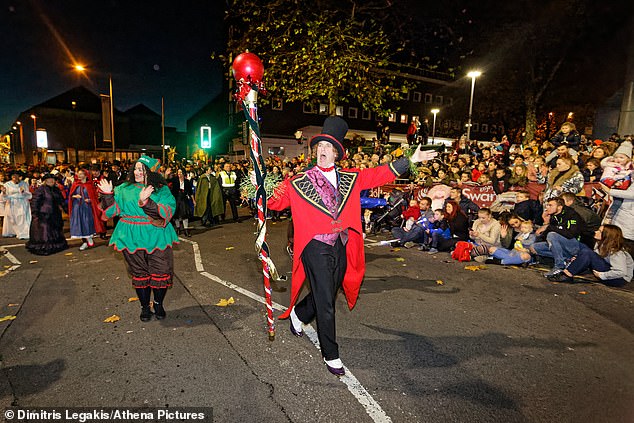 The festive event was labelled as being ‘the worst ever’ for having just three floats. Pictured: Tom and Pepe led the Christmas parade in Swansea 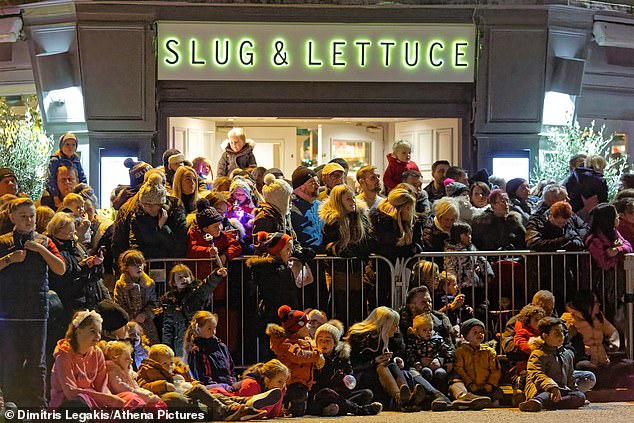 Similar angry comments were made about the event two years ago as the traditional parade was ditched in favour of acrobats suspended beneath a giant arch and a giant balloon.

But last year’s parade, inspired by the Polar Express, was a real crowd pleaser as it featured Disney princesses and Swansea Bay’s famous land train was even decorated for the occasion.

Donna Griffiths, aged 36 from Blaenymaes, felt as though she had ‘wasted her time’ after taking her five-year-old son to the parade. 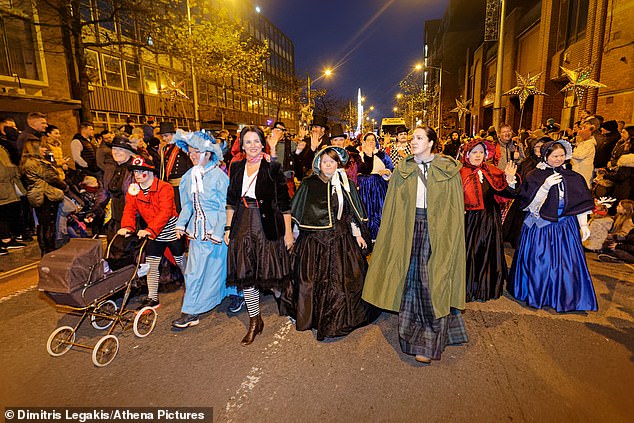 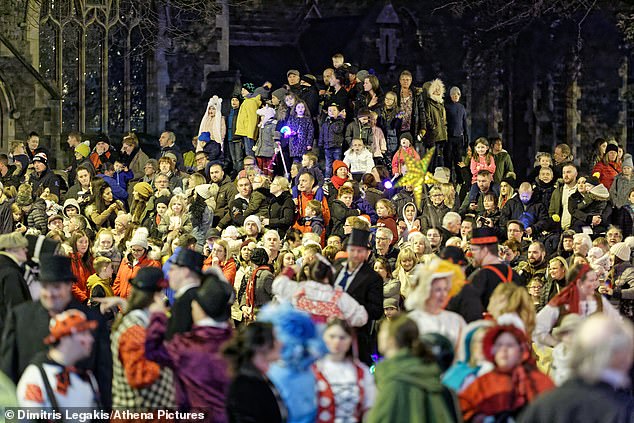 Locals gather at outside St Mary’s Church to watch the Christmas parade in Swansea on Sunday. Following the underwhelming spectacle many have since taken to social media to complain about the disappointing number of floats included in the parade

She said: ‘It was absolutely disgusting. There were only three lorries, one with Santa on, one with panels and another with ice – they had nothing to do with Christmas.

‘My son got bored and wanted to go home and we had been waiting in the freezing cold and the parade literally lasted five minutes. There were thousands there and the parade was late starting. 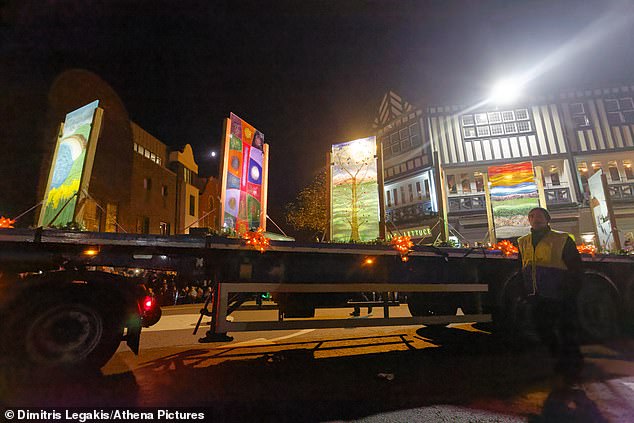 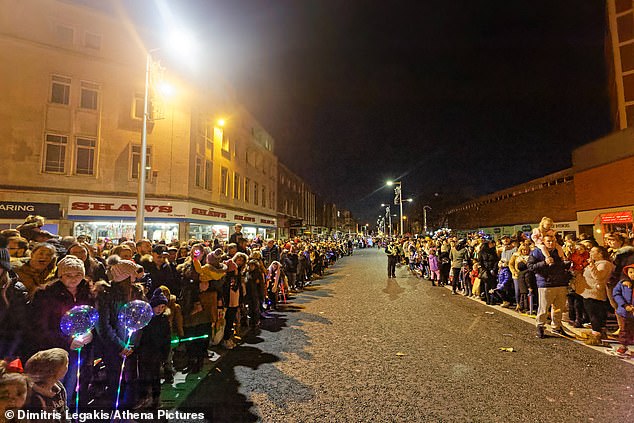 Locals line the Kingsway to watch the Christmas parade kick off in Swansea. Last year’s parade was inspired by the Polar Express and deemed a real crowd pleaser

‘Last year was meant to be amazing and I was gutted that I missed it so I made a point of going this year but my son was nagging to go home and you could see the disappointment on his face.

‘They need to make it like last year again because all of the kids loved it..’

On Twitter Gareth Evans wrote: ‘I don’t do negative online very often but what a shambles the Swansea Christmas parade and lights switch on was. Terrible.’

Another user under the handle @pasty09 wrote: ‘Well…the Swansea Christmas parade was a waste of time. Young dancers were good, the rest was very poor. Three floats and tow of them had paintings and some random cubes on them!’ 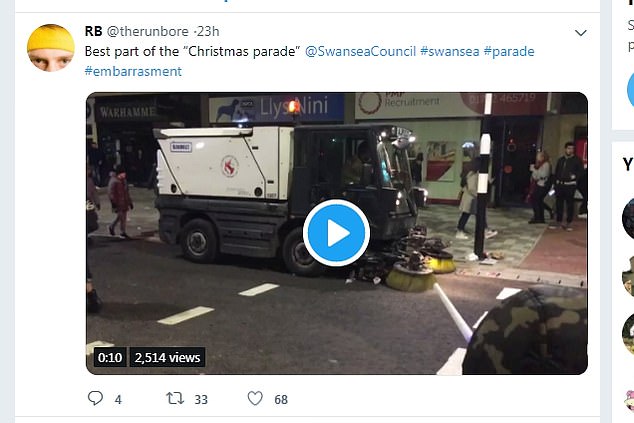 Gemma Farrell said: ‘There were more trollies for the overpriced flashing toys than there were floats in the parade. Awful parade, worst I have ever been to!’

Lisa Rowntree wrote: ‘Having to stand from 4 o’clock with four children and leave with three of them screaming their heads off freezing cold and so upset and saying they never ever want to go to another, so so upsetting compared to last year which was amazing, it’s heartbreaking.’

‘One with some boxes with lights on and Santa, my children were left disappointed, thanks again Swansea Council, why didn’t you just do similar to last year because that was good!’

Lisa Jorgensen wrote: ‘Shambles, stood in the freezing cold for three floats to pass by. What a disappointment from last year. The hype and build up to it you would expect a spectacular event for the amount of people that make the effort to come to the city centre for this. Won’t be going next year.’

While Cheryl Fisher added: ‘It was a pathetic effort. No marching bands, no choirs singing carols, no representatives from the panto and apart from the main man no Christmas spirit. Last year was such an improvement on previous years but a massive step back this year. Shame again Swansea Council.’

Another Twitter user under the name @therunbore posted a video of as refuse truck cleaning the streets following the event under the caption: ‘Best part of the Christmas parade.’

Following the ‘shambles’ event the leader of Swansea Council, Rob Stewart, apologised to ‘everyone who was disappointed’ on Facebook and assured locals that the council ‘will get it right next year’.

He said: ‘For everyone who was disappointed with this evening’s [Sunday’s] switch on event, I can only apologise.

‘This year was always going to be more challenging because of the scale of construction works in the city centre which meant not all areas were accessible and safe for the numbers attending.

‘This in turn meant we could not deliver the full parade that we had last year. 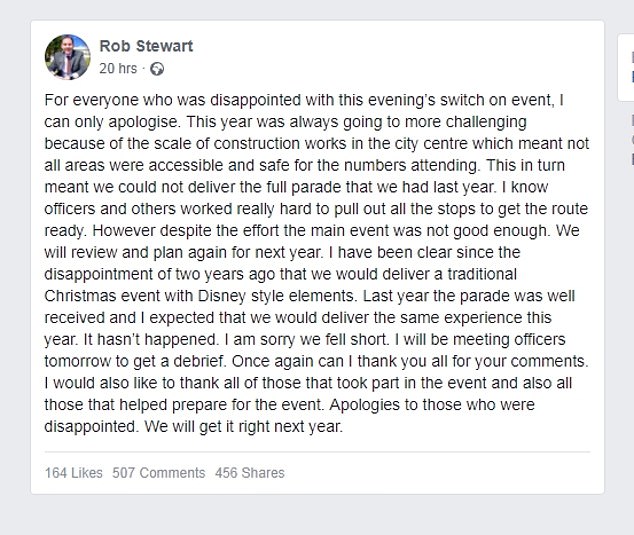 Following the ‘shambles’ event the leader of Swansea Council, Rob Stewart, apologised to ‘everyone who was disappointed’ on Facebook

‘I know officers and others worked really hard to pull out all the stops to get the route ready. However, despite the effort the main event was not good enough.

‘We will review and plan again for next year. I have been clear since the disappointment of two years ago that we would deliver a traditional Christmas event with Disney style elements.

‘Last year the parade was well received and I expected that we would deliver the same experience this year. It hasn’t happened. I am sorry we fell short.

‘I will be meeting officers tomorrow [Monday] to get a debrief. Once again can I thank you all for your comments. I would also like to thank all of those that took part in the event and also all those that helped prepare for the event.

‘Apologies to those who were disappointed. We will get it right next year.’