The parents of a 16-year-old girl who ran away with her 25-year-old wrestling coach a week ago have made an emotional plea for her to come home.

Alexus Anderson ran away with Philip Maglaya on August 22. Maglaya worked as a volunteer wrestling coach at Franklin High School in Stockton, California, but police have discovered since they fled that they were in a romantic relationship.

Before fleeing with him in his truck, Alexus left her parents a note to say she was leaving.

They described it through tears on Thursday as they pleaded for her to come home.

‘The first page said, “I love you mom and dad very much. Nothing that you guys did was your fault,”‘ her mother Iris told Good Morning America. 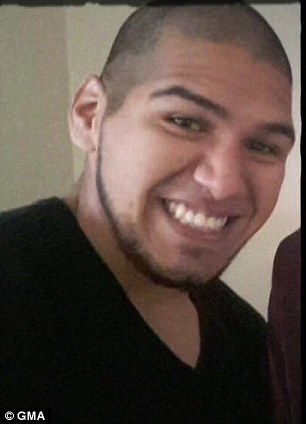 Alexus Anderson, 16, ran away with her wrestling coach, Philip Maglaya, 25 on August 22 from Stockton, California 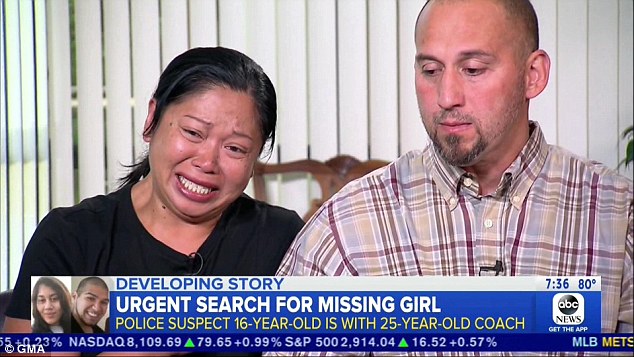 On Thursday, the teenage’s heartbroken parents Iris and Ron made an emotional plea for her to come home

She went on to say she was stressed about schoolwork and claimed her decision to leave had nothing to do with a boy.

The pair have since received a text message from her phone which said: ‘Don’t worry about me. I am safe. I’m at a friend’s house. I’ll talk to you guys soon.”

Iris, crying, questioned whether her daughter wrote it.

‘We don’t even know if it was her who sent that text. What if i was him?’  Weeping, she continued: ‘I just want to see her face. I just want to hear her voice. I don’t know.

‘It just hurts to come home and see your child every day then one day she just disappears.’

The girl’s father said he had grown to trust Maglaya after watching him coach Alexus.

‘This is a father’s worst nightmare We knew him. He was like, “Yeah, your daughter is a great wrestler … she’s going to do great next year,”‘ he said. 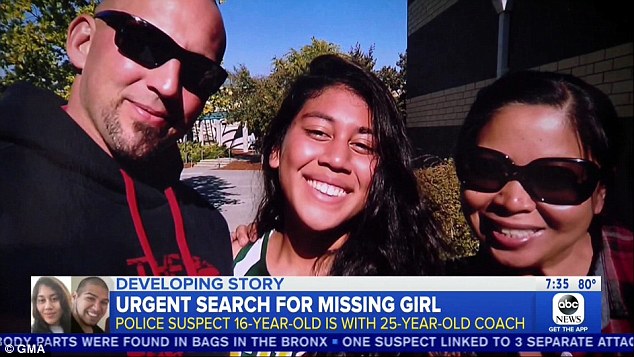 The girl’s parents said she left a note in her bedroom the night she vanished saying she was stressed about school and not to worry. The parents have since received a text message and an email from her claiming she is safe but they fear she may not have written them

Ron said that the last time he saw the teenager was when she waved at him as he backed out of their home to go to work the night she vanished.

Appealing to Maglaya, he said on Thursday: ‘Bring our daughter home.’

They noticed Alexus was missing on August 22 after her mother saw a crate by her bedroom window.

She ran into the room and found that she was gone. The note was left behind along with the teenager’s cell phone.

When her father returned home, he searched it and found that she had been calling the coach recently.

He called Maglaya and asked why. The 25-year-old answered the phone and said they spoke about nutrition. He claimed not to know where she was.

Not long afterwards, he too dropped off the radar. Police issued a warning with details of the car they believe they are traveling in. It is a 1994 green Toyota extra-cab truck.

Maglaya began working at Franklin last year after having passed all background checks.