To begin with, Jackie was in denial but then she saw the unmistakeable signs: her 13-year-old son had a new mobile phone, followed by a new bike. He would take phone calls then nip out of the house.

One day, after coming back from work at a supermarket, Jackie discovered screwdrivers and knives in his bedroom.

When she confronted him, the boy insisted the weapons were for his ‘protection’.

And that was how Jackie realised, with stomach-churning terror, that her son was ensnared in ‘County Lines’, a rapidly growing form of organised crime where drug gangs use vulnerable children as couriers.

Often travelling the length and breadth of the land, these children ferry illegal substances out of the big cities to a ready market in the provinces. And almost no corner of the country seems immune. Another parent, gas heating engineer Steve, is a hands-on father yet tells how his teenage son was found in Wales – hundreds of miles away from his home in Kent – with a man in his 40s. ‘It’s soul-destroying,’ Steve says.

‘Because you only want what’s best for your children but when they go down this path, it’s hard to get them out.’

I spoke to four other mothers too, a total of six parents from different backgrounds united by the fact their children were lured into the same crime group in Dover and forced to sell drugs. 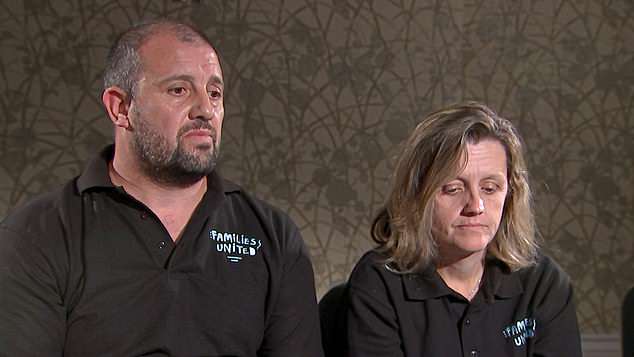 The six didn’t know each other before their ordeal began, but during many night-time searches – scouring the streets of their town, in pyjamas, looking for much-loved teenagers who should have been tucked up safely in bed – they’ve become like family.

And now they are speaking out, the first parents of children trapped in County Lines to describe what it is like to lose your sons to crime.

ITV News, where I’m the National Editor, first revealed the scale of the County Lines scandal two years ago.

The dealers used children – some as young as 12 – because, back then, the police didn’t think to look at them as potential mules as they ferried drugs from cities to shires. 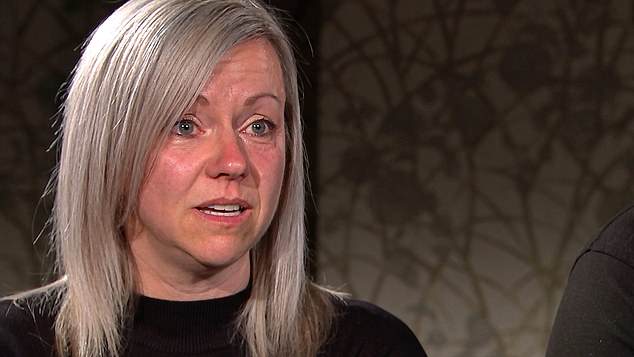 Sometimes the dealers demanded that the youngsters wear local school uniform. At the time, seven police forces acknowledged a problem with drug dealers using young people. Now the National Crime Agency says every force across the country is grappling with County Lines gangs.

I’ve interviewed parents about the agony, the fear and the shame, but they have never felt confident enough to go public. Until now.

In the last year, the drug dealers who controlled these Dover boys were raided by the police and some of the children broke free.

And so their parents have broken cover too. Steve says: ‘We’ve actually seen one of our sons thrown into the back of a car and driven off at speed.’

This bear of a man is on the verge of tears as he describes how one of his teenage sons was physically dragged from the family home by a drug dealer.

‘It is absolutely heartbreaking… it ruins families,’ he says.

His wife Kerry sits next to him, unflinching.

These families want people to realise it could happen to them too.

Cara, the driving force of the group, says: ‘I was so relieved when I met Steve. The stereotype is that this is the sort of thing that happens to single mothers, and so I thought it was all my fault because my son hadn’t had a father figure in his life. But it happens to normal families too.’

Another mum, Jo – who has a four-bedroom house in the countryside –can only agree. Her boys were 13 or 14 when it started.

By day, Dawn has a highly demanding job as a civil servant. At night she would take the house keys to bed with her and hide all of her son’s shoes so that he couldn’t abscond while she tried to sleep. Even so, he jumped out of the windows and ran off down the street.

‘I don’t know what words would describe how bad it was,’ she says.

There’s a murmur of recognition when Dawn details carefully hiding shoes at bedtime.

Jo says she has watched her son run off in the only footwear he could find – his football boots. This was the night-time ritual for all the parents: hide the children’s shoes, select pyjamas for themselves that they’d be happy to wear outside on the streets, then place their own shoes by the front door, ready for the moment when they have to leap out of bed.

Then there was the constant forensic and obsessive searching of the boys’ bedrooms whenever they were out.

The parents established a WhatsApp group to alert each other when a son went missing.

If one of them spotted an incident on Facebook, they would dash out of the house, even if it wasn’t their own child involved, picking each other up in a car and heading off to find their kids and rescue them – Dawn and Jackie; Jackie and Jo; Kerry and Cara.

Jo still has a length of piping by her handbrake that she kept as a weapon for these night-time dashes.

It was a dark period for all the families. Jo says: ‘Our home was raided and quite a lot of drugs were found. And the police were worried about the repercussions of that to our family. I’ve got two other children, two young daughters, so they had to be taught how to use the alarms. It was hard.’

Some people will be critical of these young men. Their parents certainly are. Jackie is firm that her son has made some very ‘bad choices’. But I know, having covered the rise of County Lines, that it is so much more than an upsetting phase children grow out of. I’ve watched police forces across the country perform a shift: from seeing these young people as violent to seeing them as vulnerable.

What starts off as dabbling quickly becomes a trap. The children are bound to the drugs trade by blackmail, debt and danger.

Steve’s account is almost textbook. ‘We believe he got groomed from the age of 15 by an older boy – I should say man really. He was 20. Entice him round to the house with an Xbox and games and then get him to start running drugs.’

Then, when the boys go to make the deliveries, they find themselves attacked and robbed – by fellow members of their own gang.’

This leaves them with neither the drugs nor the payment to hand back to the ringleaders.

‘So they are in debt straight away,’ Steve continues. ‘They [the gang leaders] have basically got them.’

This is a story replicated around the country, and it places loved ones in an impossible vice. Steve and Kerry have paid their sons’ drug bosses to stop them from hurting their children. 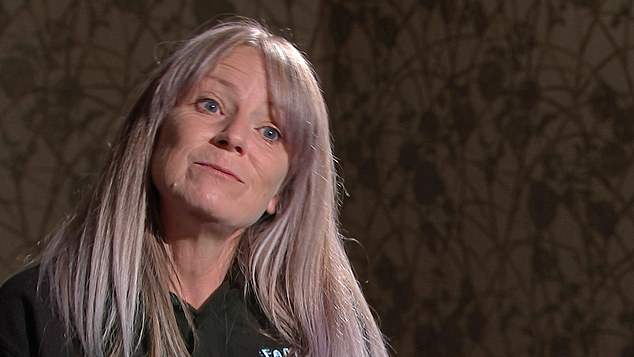 Cara’s son was at the scene of a fatal stabbing

After their son was thrown into the back of a car and driven away, the couple felt they had to stump up. ‘As soon as you pay,’ Steve says, explaining the catch 22 situation, ‘you’re good for the money so they are going to keep at him.

‘But if you don’t pay there is a chance they’ll get hurt.’

Steve has a natural authority. When he gets back from a long day at work fitting gas boilers, he helps with the dishes while ‘little people climb all over him’, as his wife puts it. They have eight children.

So how does he deal with his teenage son defying him?

His eyes well up. He says: ‘People say, ‘ground them’. Well, you try grounding a 15-year-old boy. If he wants to go out and he is determined to, there’s no way unless you physically stop them.’ 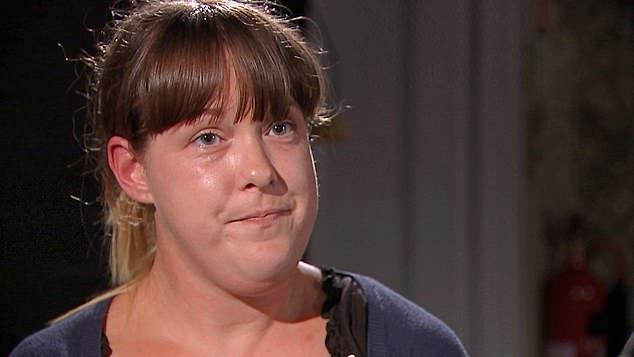 When their son was found in Wales with an adult, police believed he was potentially a victim of exploitation.

Of course these parents don’t want their children prosecuted, but they do wish they had been more afraid of the consequences earlier on. Kerry tells me: ‘We don’t want them criminalised, We just need them to be… scared. Of the repercussions.’

And there is so much anger towards the people who did this to their children. ‘They are violating my child,’ Jo says. ‘And actually I want to go and rip their face off.’

She is well-spoken and polite, so hearing her say this packs quite a punch. So what do they think went wrong? ‘Obviously there’s a shortage of police,’ says Cara.

Kerry agrees: ‘If there are a few more bobbies on the beat, that might deter these people.’

The parents also believe their sons need help with post-traumatic stress. Cara remembers being rung in the middle of the night to say that her son had been at the scene of a fatal stabbing.

The parents believe that another factor is that all of these children were excluded from mainstream education, and placed in a Pupil Referral Unit. Their parents believe that was the beginning of the end. ‘The pupils there all have some sort of behavioural issues,’ Dawn says. ‘You’re putting them altogether… it’s no good.’

The families believe it created a vacuum into which the drug dealers stepped.

A Government-backed report, seen by ITV News, shows that these parents’ experience typifies the problem in Kent: drug dealers have adapted, and whereas they used to take children from cities away from their homes, now they are recruiting local children. 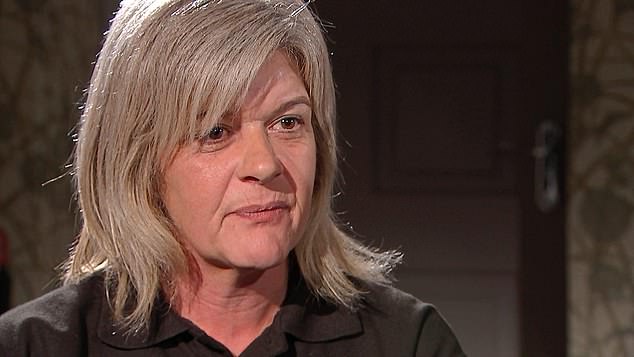 Jackie’s son had hidden knives in his bedroom

It’s a shocking finding that surely must provoke urgent Government action. Kent Police, for example, have had success with a mentoring scheme, offering one-to-one support and home visits for children targeted by drug dealers.

The force estimates it has saved £300,000 in police time because there has been a dramatic fall in the number of teenagers who go missing thanks to County Lines.

With most of their children now safely out of County Lines – and at college or working – these friends feel able to share their experiences, clubbing together to form Families United.

It is a modest affair with a daunting agenda: they want a new local youth centre with wi-fi, music channels, table tennis and pool, but also professionals visiting to encourage young people into work.

Their campaign has received the support of the local MP Charlie Elphicke. Jo says: ‘Everybody needs to be a little bit more aware of what’s going on in their towns. A lot of people I know when I’ve said ‘County Lines’ have been ‘What? What’s County Lines?’

‘So I send them the link and they say, ‘Oh my God, does that really happen?’ And I warn them, ‘Yes, it’s happening now.’