Pedri has hailed Robert Lewandowski’s impact at Barcelona after the Polish striker starred on his Nou Camp debut as Barcelona beat Pumas 6-0 in the Joan Gamper Trophy on Sunday.

Lewandowski completed his move to the Spanish giants from Bayern Munich last month in a deal worth £42.5m, and he was unveiled as a new signing in front of thousands of fans on Friday.

It took him just three minutes to get off the mark against Pumas as he rounded the goalkeeper before slotting home, and he then went on to set up two goals for Pedri inside the opening 20 minutes. The teenage midfielder is delighted that he is already developing a connection with Lewandowski on the pitch. 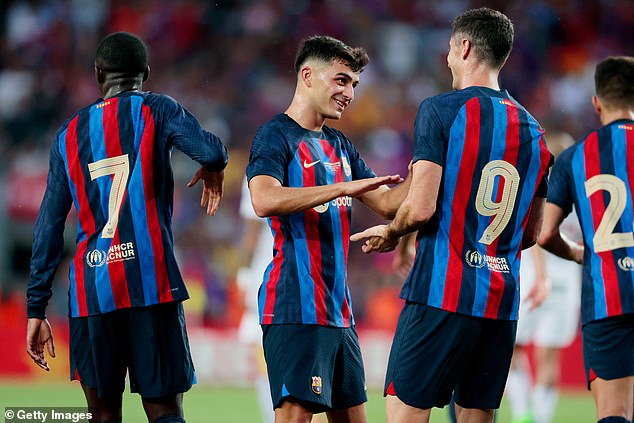 ‘It’s a luxury to play with Lewandowski, I really enjoy seeing how he shoots and how he plays,’ Pedri told TV3 and Barca TV.

‘It’s very easy to get along with a footballer like him. We’ve looked for each other during the match and it went well.’

Lewandowski scored 344 goals in 375 matches for Bayern, and it already looks like finding the net is not going to be an issue for him at Barcelona, based on his latest performance.

He received the MVP award after the match following his impressive display as the team signed off pre-season in fine style. 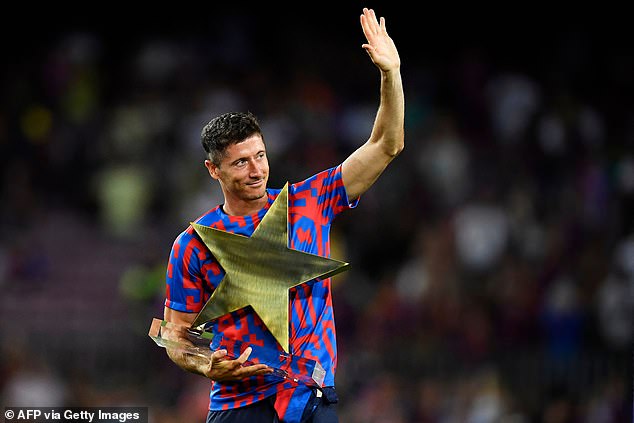 Lewandowski was handed the MVP award after the match, and looks to be settling in well

They are now set to start their LaLiga campaign on Saturday when they host Rayo Vallecano, however, there is currently some doubt about whether Lewandowski and all of the club’s other new signings will be eligible to play.

Barcelona have spent heavily this summer, bringing in the likes of Raphinha and Jules Kounde alongside Lewandowski.

They have already pulled three financial levers to try to balance the books at the club, but LaLiga have informed them that they will need to pull another one in order to register their new players.

Therefore, it is clear that there is still work to be done to ensure that Lewandowski is given the opportunity to build on his stunning showing against Pumas when Barcelona return to domestic action.