The construction industry fears it could collapse if state governments don’t crack the whip to enforce regulations, as insurers walk away from high-risk projects.

Master Builders Australia chief Denita Wawn is urging states to ensure greater enforcement of regulations, as some players aren’t being held to account.

‘As an industry association we can’t do that but those who regulate the industry can,’ she said.

Some states are excluding cladding from insurance policies in the wake of skyrocketing premiums.

‘The insurers are taking on massive risk and are questioning whether or not they do that,’ Ms Wawn says.

John Massey – the certifier of Perth’s Optus Stadium – has penned a letter to Scott Morrison warning his firm is in danger.

Mr Massey says his firm’s contracts will be in trouble due to insurance companies offering private building certifiers coverage with exclusions for dangerous materials such as cladding.

He has accused the states of not doing enough to solve the ongoing problem.

‘We will be required to close our business without our current insurance cover,’ he told the prime minister.

‘Building surveying firms across Australia have closed their doors and many more will be forced to follow.

‘Without a workable solution on the table very soon, I believe the building and construction industry throughout Australia will eventually collapse.’ 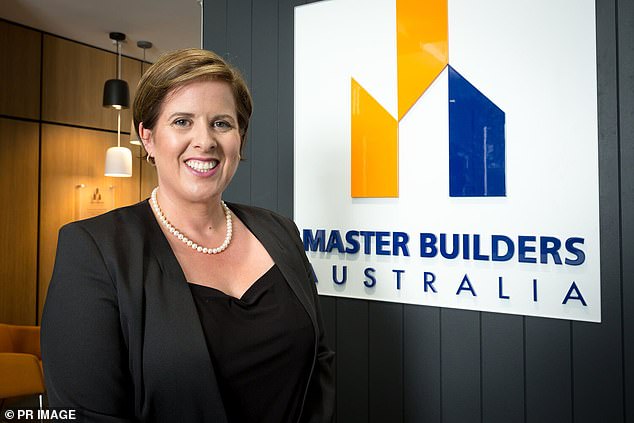 Master Builders Australia chief Denita Wawn is urging states to ensure greater enforcement of regulations, as some players aren’t being held to account

The groups argue the inconsistent approaches are fanning a crisis in the building supply chain.

Labor has accused the federal government of failing to show leadership on the issue, but the responsible minister blames the states and territories for the mess.

Federal Industry Minister Karen Andrews will put pressure on her state and territory counterparts when she meets them in Sydney on Thursday.

She is offering to fund a task force to oversee the response to a recent report into building surveying.

Ms Andrews has praised Victoria for announcing it will pay for combustible cladding to be removed from privately owned building, saying other states should consider the solution.

But the federal government won’t be offering to foot the bill.

‘The commonwealth is not an ATM for the states,’ she told ABC radio.

‘This problem is of the states’ making and they need to step up and fix the problem and dig into their own pocket.’