Biggest ever discovery of sacrificed children is uncovered in Peru as 227 victims aged four to 14 who were killed ‘to stop bad weather’ are discovered, all facing the sea

By Afp and Bryony Jewell For Mailonline

Archeologists have discovered the remains of 227 children at a site in Peru in what they believe is the world’s largest sacrifice site.

Researchers have been digging at the site in Huanchaco, a beachside tourist town north of the capital Lima, since last year.

Chief archeologist Feren Castillo said the children, who were aged between four and 14, were sacrificed in a ritual to honor the pre-Columbian Chimu culture’s gods.

It is thought that they may have been killed to try and stop bad weather known as the El Nino phenomenon in the region.

The remains of 227 children, one of the skeletons pictured, have been found at a site in Huanchaco, north of Lima, in Peru 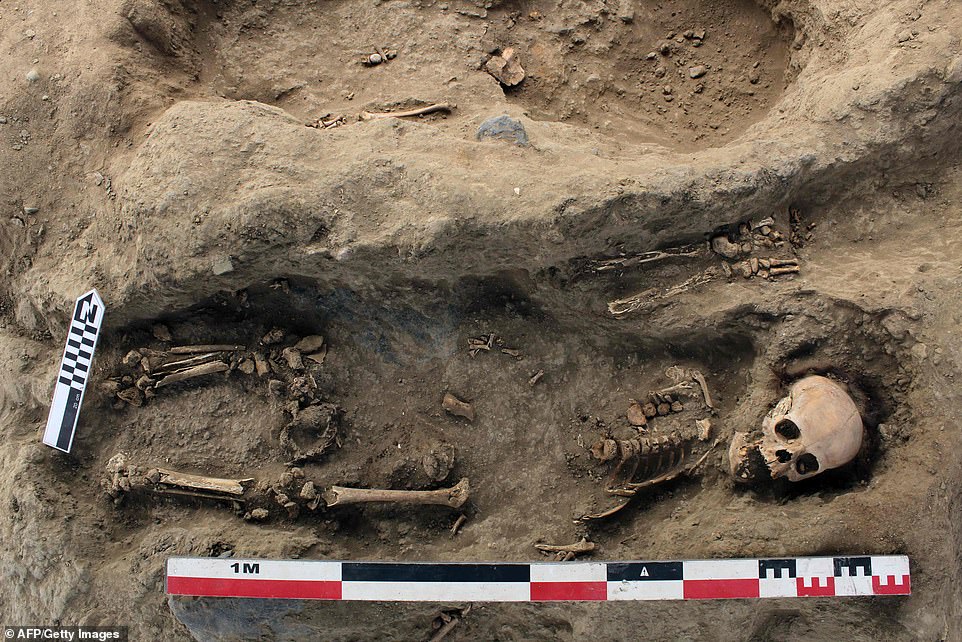 It is thought that the children, aged between four and 14, were sacrificed in an effort to appease the gods and stop bad weather brought on by a climate change phenomenon called El Nino

‘This is the biggest site where the remains of sacrificed children have been found,’ said Castillo.

‘They were sacrificed to appease the El Nino phenomenon,’ and show signs of being killed during wet weather, he said.

The El Nino phenomenon is a climate change pattern involving the unusual warming of water in the Pacific Ocean.

This event is associated with adverse effects on fishing, agriculture and local weather from Ecuador to Chile.

El Nino occurs irregularly and cannot be predicted in the same way as other weather patterns such as tides.

After a discovery of 269 children and 466 llamas in two sites near Huanchaco earlier this year, researchers also looked to El Nino for an explanation. 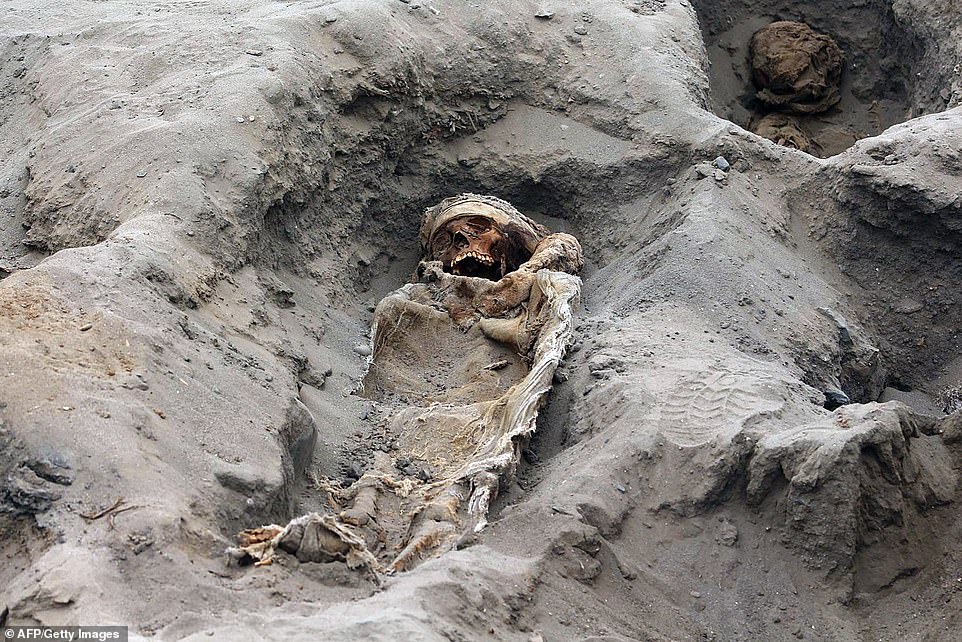 All of the skeletons, one pictured, were found facing the sea and some still had hair and skin. Researchers think that this could be the largest site of child sacrifice found in the world 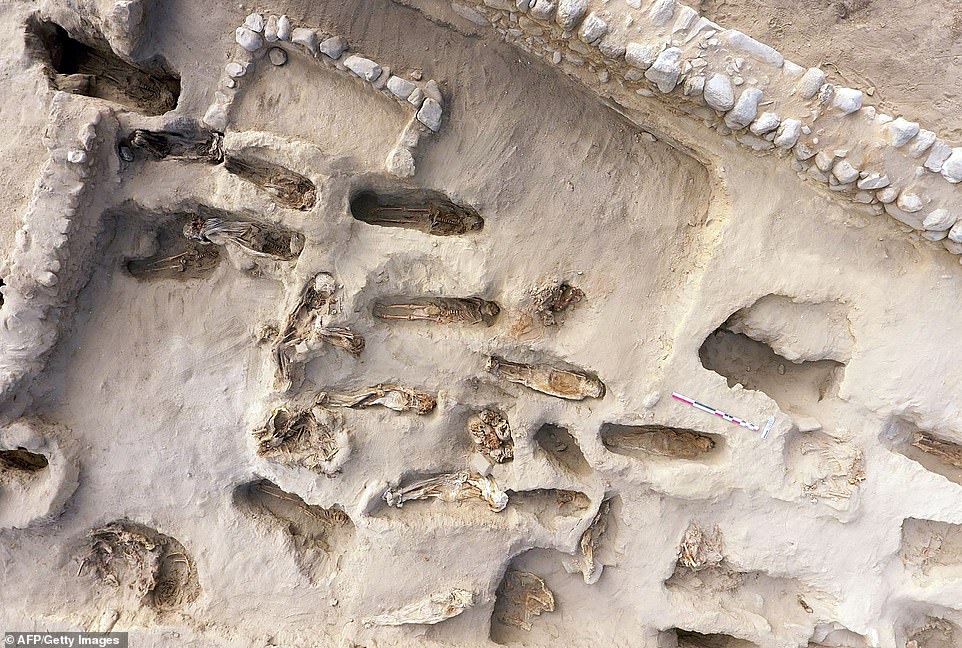 They said that the weather change would have rattled the state and the sacrifices could have been an attempt to persuade the gods to stop the rain, reports National Geographic Magazine.

Gabriel Prieto, a professor of archaeology from the National University of Trujillo, said: ‘This number of children, this number of animals—it would have been a massive investment on behalf of the state.’

Castillo added that there may still be more sacrificed children to be found at the new site in Huanchaco.

‘It’s uncontrollable, this thing with the children. Wherever you dig, there’s another one,’ Castillo said. 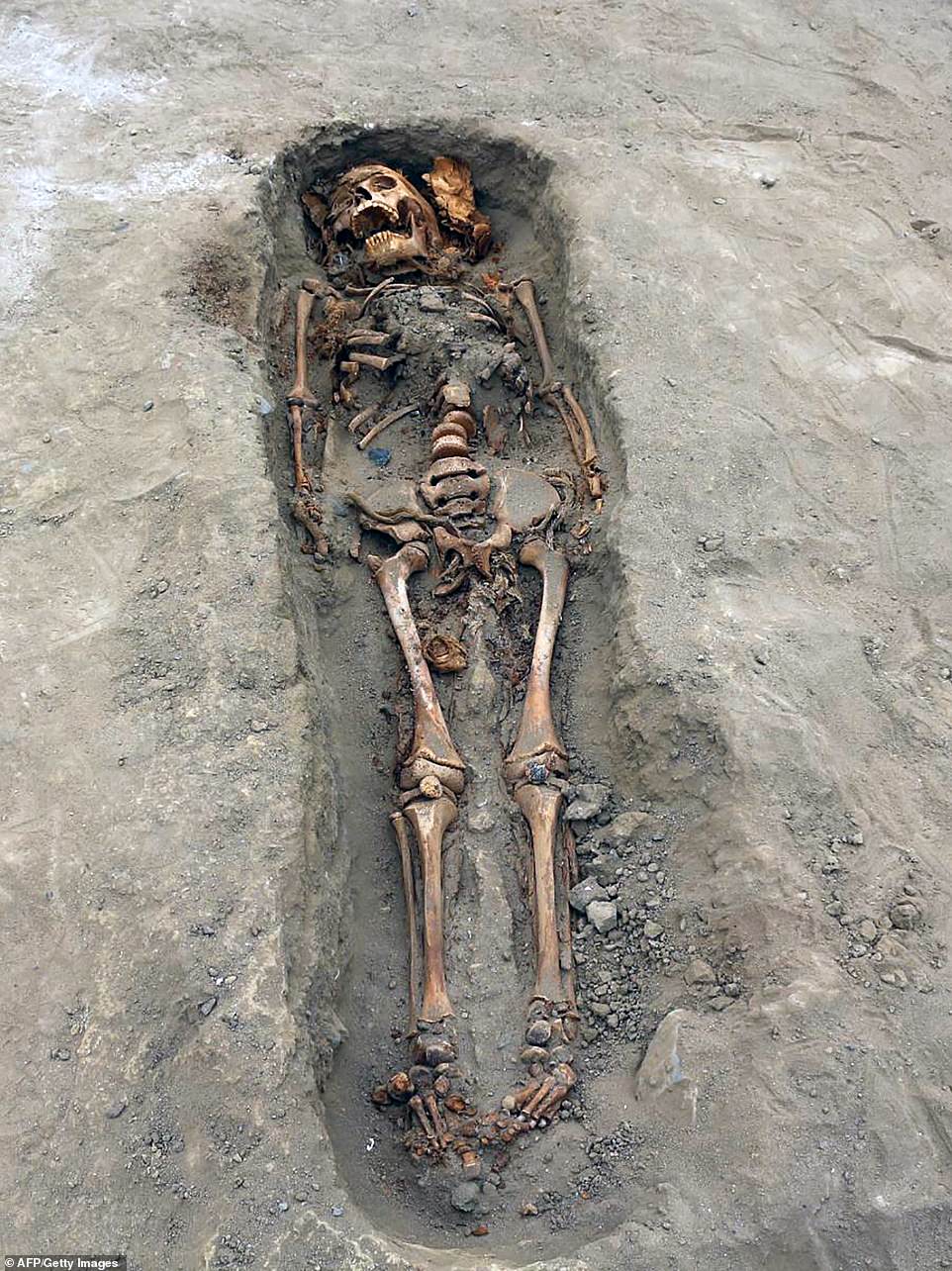 The children were part of the Chimu civilization which disappeared in 1475 after it was conquered by the Inca empire. Pictured is the remains of one of the children 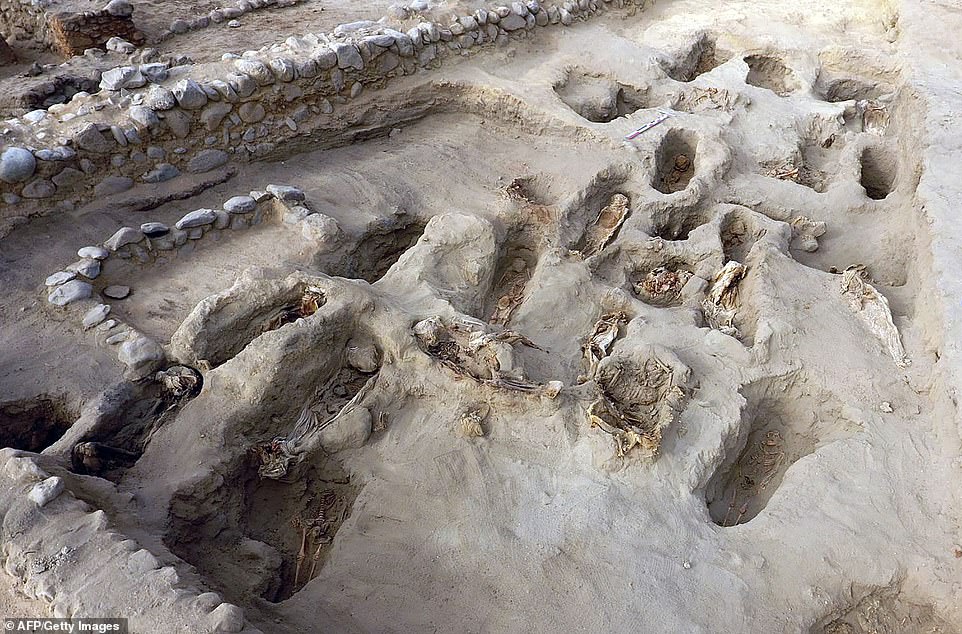 Several child sacrifices took place during the time of the Chimu culture and last year the remains of 140 children and 200 llamas were found. Pictured are graves at the new dig site 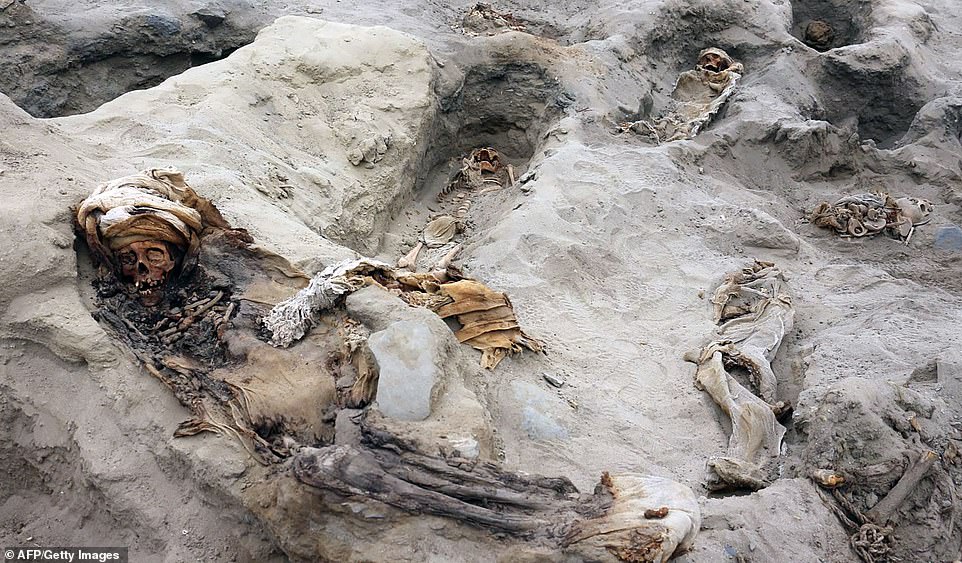 The children, the remains of some of the 227 pictured, could have been killed during El Nino. This is a weather phenomenon which can effect fishing and local weather

The children’s remains were found in a position facing the sea. Some still had skin and hair.

Huanchaco was a site where many child sacrifices took place during the time of the Chimu culture, whose apogee was between 1200 and 1400.

Pampa la Cruz is a short distance from Huanchaquito, where the remains of 140 sacrificed children and 200 llamas were found in April 2018.

The Chimu civilization extended along the Peruvian coast to Ecuador but disappeared in 1475 after it was conquered by the Inca empire.