‘There are only a few talents like him around’: Peter Bosz hails Matthijs de Ligt ahead of reunion with ex-Ajax star as Juventus host Bayer Leverkusen in Champions League

Peter Bosz has claimed he could tell Matthijs de Ligt was destined for greatness at just 17 as he prepares to face his former Ajax prodigy when Juventus host Bayern Munich in their Champions League group stage clash.

De Ligt, now 20, was handed his senior Ajax debut by Bosz in September 2016 and the pair reached the 2017 Europa League final before the boss left for an ill-fated spell at Borusia Dortmund.

Bosz has since returned to management in Germany with Bayer Leverkusen, and is aiming to cause a major upset in Italy – but knows the defender will prove a big obstacle.

‘When I was coaching Ajax he was only 17, but he was a great player even then,’ Bosz said.

‘There are only a few talents like him around. Juve are a great team, who are difficult to face.

‘Sarri loves to get his teams playing well. We’ve already seen it with Napoli and Chelsea.’ 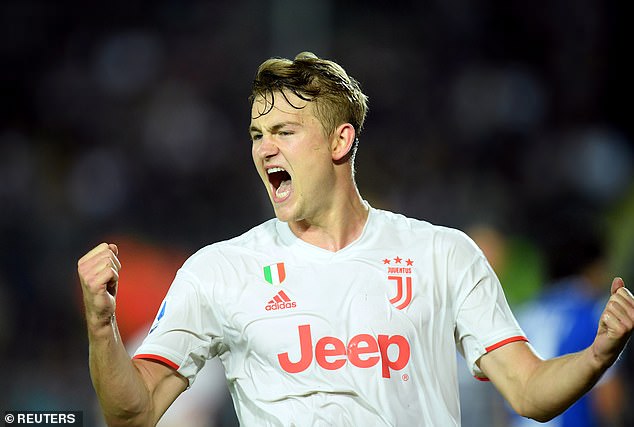 Matthijs de Ligt will play against Bosz, having played for him while just 17 at Ajax

Leverkusen are looking to bounce back from a 2-1 defeat at home to Lokomotiv Moscow in their opening Champions League fixture.

‘We absolutely had to win at home to Lokomotiv. Unfortunately it didn’t happen and tomorrow we have a second chance.

‘There can’t be any sign of nerves. It would’ve been better not to have this downtime, but it’s not relevant.’