Petrol prices could soar by 7.5p per litre after biggest spike on oil market since First Gulf War

Petrol prices could soar by 7.5p per litre over the next six weeks in the wake of unprecedented drone strikes on Saudi Arabian oil facilities on Saturday.

The blasts knocked out 5.7million barrels of daily production, more than half of Saudi’s output and five percent of the world’s oil production.

Oil prices were up by 20 percent at one point today, the biggest intra-day jump since the First Gulf War in 1991, before stabilising as Donald Trump authorised the use of America’s emergency stockpiles.

Goldman Sachs predicted the price of Brent could climb to $75 in the next six weeks, which would result in price hikes of 7.5p per litre ($34 per gallon). 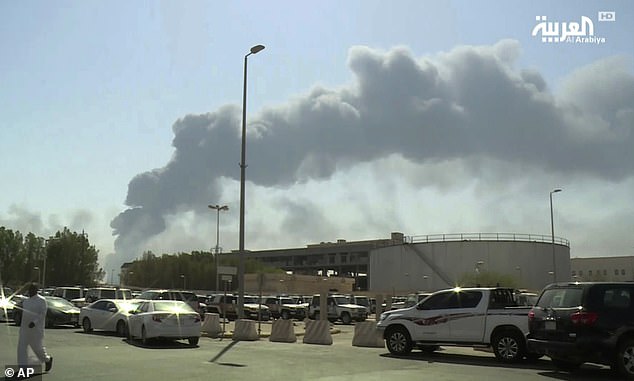 Smoke from a fire at the Abqaiq oil processing facility fills the skyline, in Buqyaq, Saudi Arabia on Saturday 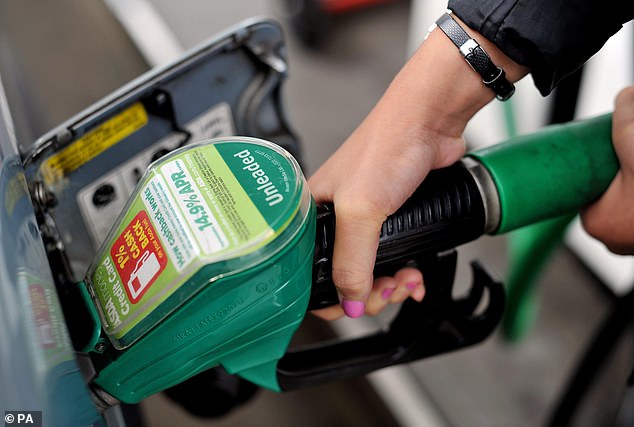 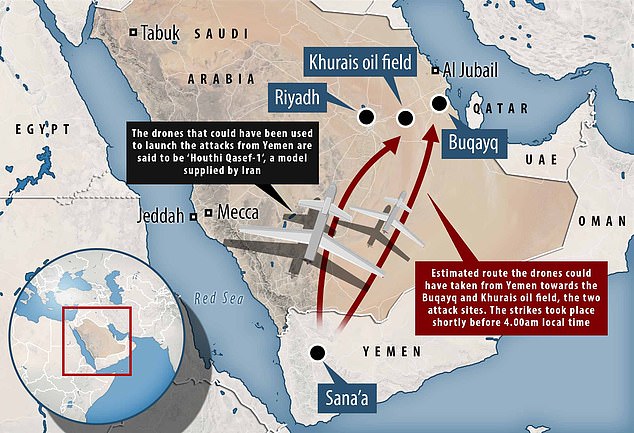 A military spokesperson for these Yemeni rebels, who are locked into a bloody civil war, claimed responsibility for the strike on Saudi Arabia ‘s state-owned oil giant Aramco

The AA forecasts any increase in petrol prices would be mitigated by the relative strength to the pound against the dollar, supermarkets dropping prices on Friday and increased production levels by the Americans.

Luke Bosdet the AA’s fuel spokesman told MailOnline: ‘So at the moment it’s gone up to $66 – gone up to where it was earlier this summer. We were up to about $66 or $67 in June and July, during the tanker hijacking or hijacking attempts.

‘The $66 may be pushing the price up by 3p a litre, some of that will be held back by the stronger pound.’

Mr Bosdet said at a constant exchange rate, a two dollar per barrel increase brings a 1p per litre ($4.5 per gallon) change at the pump.

The threat of all-out war is blowing the lid off predictions, with some analysts claiming we could be headed for $100 per barrel – another 20p per litre ($90 per gallon) on the forecourt.

President Trump tweeted yesterday that the US was ‘locked and loaded’ as Secretary of State Mike Pompeo pointed the finger of blame at Iran.

Tehran has denied any involvement attacks, calling accusations to the contrary ‘unacceptable’ and ‘baseless’. Iran-backed Houthi rebels, which operate out of Yemen, have officially claimed responsibility. 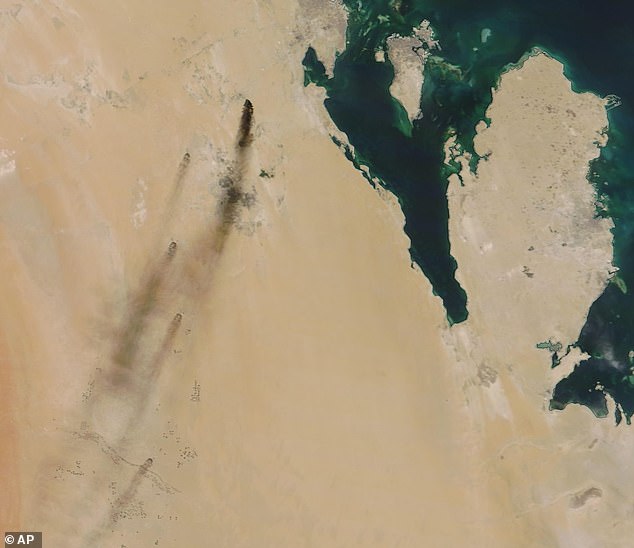 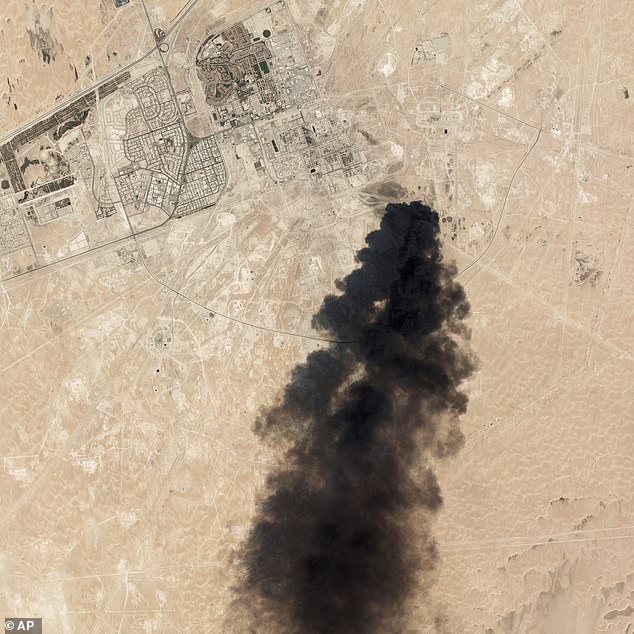 Smoke rises from the Abqaiq oil refinery in Saudi Arabia, the world’s largest, after it was attacked by drones on Saturday – knocking out 5 per cent of global oil supplies

Benchmark Brent crude gained nearly 20 per cent in the first moments of trading Monday before settling down to 10 per cent higher.

Rystad Energy, a fuel industry consultancy, said the attacks ‘turned the market on its head’ over the weekend, and had altered the perception of widely-available oil supplies in the wake of the shale boom in the US.

Meanwhile RBC Capital markets warned the attacks have ‘pushed the region ever closer to military confrontation’ and that oil markets are set for a ‘recalibration’.

The US said it is poised to release its oil reserves to cover any short-fall, but experts still warned that gas prices will be hit, with those on the West Coast worst affected.

Tom Kloza, an analyst at the Oil Price Information Service, said rises of up to 24 cents per gallon could be seen if the disruption drags out. 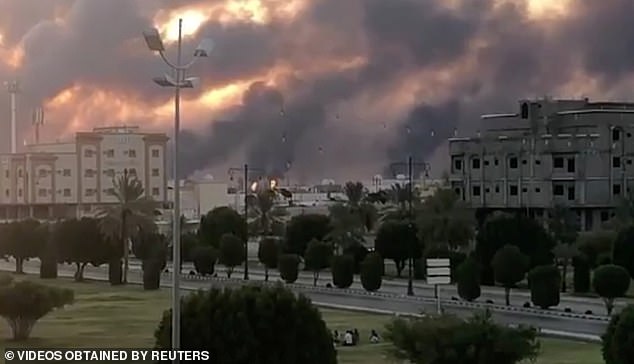 Experts have warned that using relatively low-tech drones to penetrate security around the refinery is a ‘turning point’ for the world’s fuel supplies (pictured, the refinery burning) 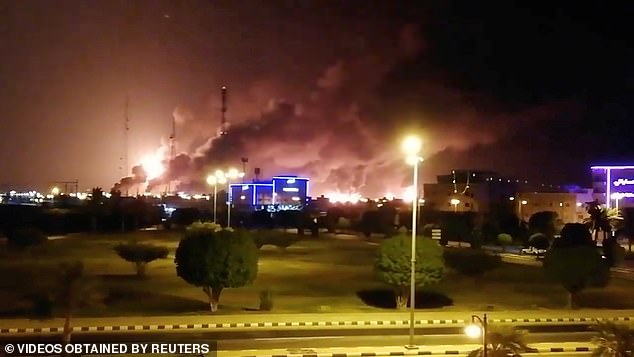 Analysts said they expect to see repeat attacks on oil processing facilities, as crude prices soared across the globe on Monday

He told USA Today: ‘The question is, does the increase continue to grow and gain steam through the next few months or does Aramco make crude available through some other means?’

America used to be among the nations with the largest imports, but increased production thanks to shale gas has seen it cut its orders.

The bomb attacks ramped up tensions around the Persian Gulf once again, just as the spectre of conflict between the US and Iran was beginning to fade away after a summer that saw attacks on oil tankers and an American drone shot down.

President Trump tweeted Sunday that America is ‘locked and loaded’ while Iran said it was ‘ready for full-fledged war’. 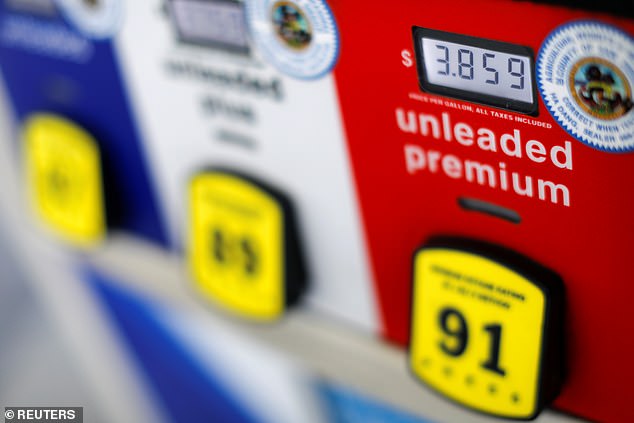 Dominic Raab, the UK Foreign Secretary, said the attack ‘was a wanton violation of international law’ but refused to be drawn on who was behind it.

‘In terms of who is responsible, the picture is not entirely clear,’ Raab said. ‘I want to have a very clear picture which we will be having shortly.

‘This was a very serious attack on Saudi Arabia and the oil installations and it has implications for global oil markets and supply,’ Raab said.

‘It’s a very serious, an outrageous act, and we need to have a clear and as united as possible international response to it.’