‘Pharma Bro’ Martin Shkreli is engaged, according to a Wednesday letter his lawyers wrote to get him released from a minimum-security prison in Pennsylvania.

The 37-year-old is requesting to spend the remainder of his sentence with his new fiancée in her Manhattan apartment, where he would then work on a cure for the coronavirus.

Shkreli’s lawyer claim that he has been conducting ‘significant research’ into developing molecules that inhibit a coronavirus protein, the New York Post reports.

‘One company is prepared to begin working on clinical trials of Mr. Shkreli’s work within weeks.’

Earlier this month, Shkreli asked for a three-month furlough from his seven-year prison sentence, so he could help the pharmaceuticals industry in the fight against the novel coronavirus.

The warden at the facility denied that request.

Shkreli was jailed in 2018 for looting $11million of stock from his own firm to pay investors in two failed hedge funds he ran. His scheduled release date from a low-security federal prison in Allenwood, Pennsylvania is September 2023.

He explained in an 11-page paper published by biotech company Prospero Pharma, that his bid for release has nothing to do with earning money and boasts of being a ‘successful two-time biopharma entrepreneur’ with unique experience to contribute in the field.

‘I am asking for a brief furlough (3 months) to assist in research work on COVID-19,’ Shkreli writes in his author statement. ‘Being released to the post-COVID world is no solace to even the incarcerated.

‘As a successful two-time biopharma entrepreneur, having purchased multiple companies, invented multiple new drug candidates, filed numerous INDs and clinical trial applications, I am one of the few executives experienced in ALL aspects of drug development from molecule creation and hypothesis generation, to preclinical assessments and clinical trial design/target engagement demonstration, and manufacturing/synthesis and global logistics and deployment of medicines.’ 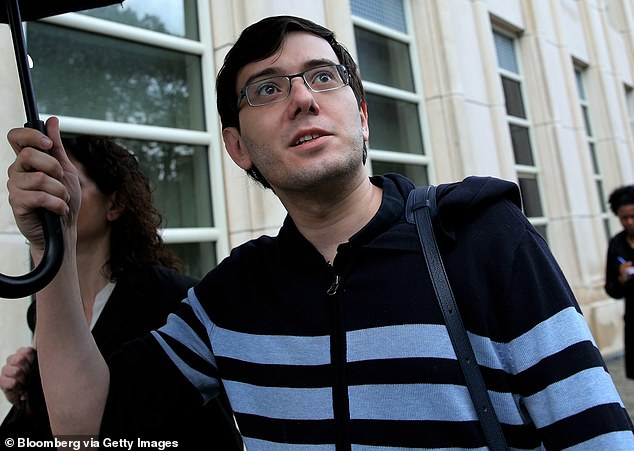 Martin Shkreli, 37, wrote in a manuscript published by biotech company Prospero Pharma: ‘I am asking for a brief furlough (3 months) to assist in research work on COVID-19’ 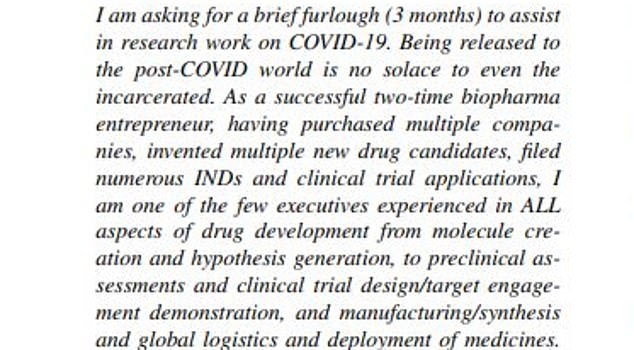 In the new manuscript Shkreli boasted he is a ‘successful two-time biopharma entrepreneur’, having purchased multiple companies and ‘filed numerous INDs’

Shkreli was sued by federal and state authorities in February for using unscrupulous tactics to stop competitors making versions of Daraprim and raising the cost from $13.50 a pill to $750 (5,000 per cent).

The drug is used to treat toxoplasmosis, a parasitic infection that can be deadly for people with HIV or other immune-system problems, and can cause serious problems for children born to women infected while pregnant.

‘For the avoidance of doubt, I have not been paid for any work on this matter or any other matter while incarcerated,’ Shkreli continues. ‘I do not expect to profit in any way, shape or form from coronavirus-related treatments.

‘I believe any company developing a coronavirus drug should seek to recoup its cost at most and be willing to perform the work as a civil service at the least.’ 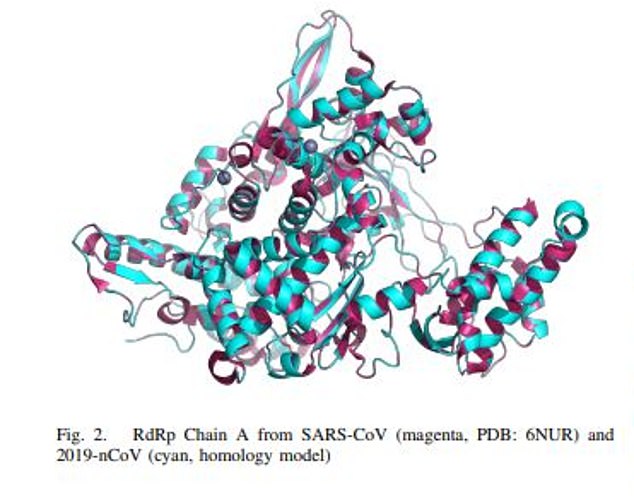 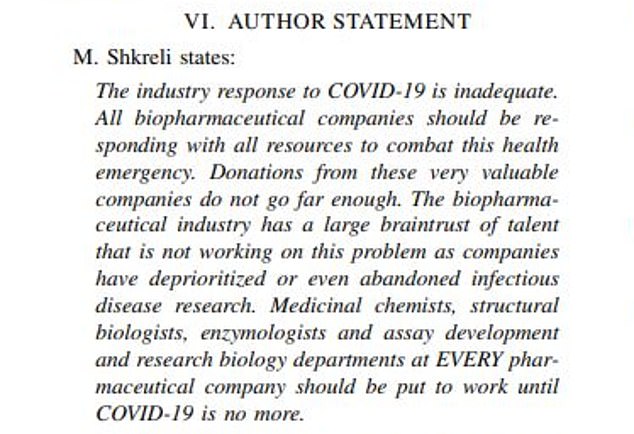 He adds: ‘If the government is willing to reward industry for their work on this catastrophic situation, it will be at each company’s discretion to accept, negotiate or deny such funding, including bulk purchases, cost reimbursement, tax credits and other benefits.’

The manuscript is co-authored by Kevin Mulleady an unindicted co-conspirator in his convicted case, as well as Maureen Lohry, and Jason Sommer. Shkreli and Mulleady are named as having designed and managed the project. Alongside Sommer, Shkreli engineered the in silico workflow and performed the screening, while  James Rondina provided high-performance computing assistance and research. 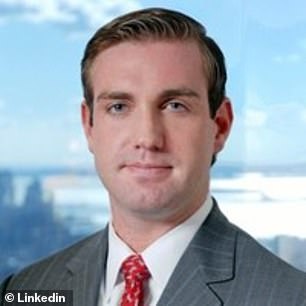 In the new paper, Shkreli blasts the current handling of the pandemic.

‘The industry response to COVID-19 is inadequate. All biopharmaceutical companies should be responding with all resources to combat this health emergency. Donations from these very valuable companies do not go far enough,’ he writes in his author statement.

‘The biopharmaceutical industry has a large braintrust of talent that is not working on this problem as companies have deprioritized or even abandoned infectious disease research. Medicinal chemists, structural biologists, enzymologists and assay development and research biology departments at EVERY pharmaceutical company should be put to work until COVID-19 is no more.’

The manuscript notes that ‘because of temporary communication restrictions aimed at curtailing the spread of COVID-19’ Shkreli, was unable to have final review over the paper, titled ‘In silico screening for potential COVID-19 beta-coronavirus non-nucleoside RdRp inhibitors’.

Shkreli’s lawyer said he would be filing the furlough request ‘shortly’ to the Bureau of Prisons and Brooklyn federal Judge Kiyo Matsumot, who over saw his case.

‘I have often said that left to his own devices, I believe Martin could cure cancer,’ Benjamin Brafman told The New York Post.

‘Feel the same about coronavirus. Warehousing this genius instead of letting him help with the research, makes no sense whatsoever.’ 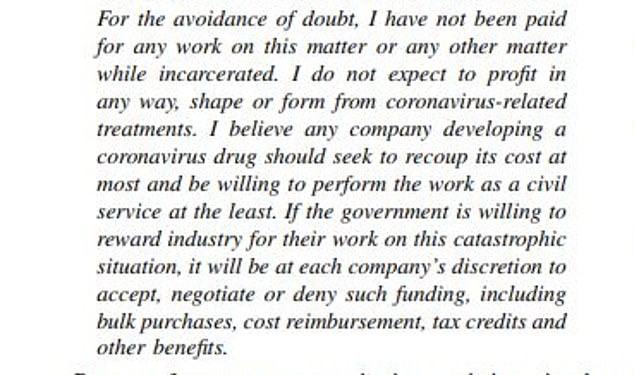 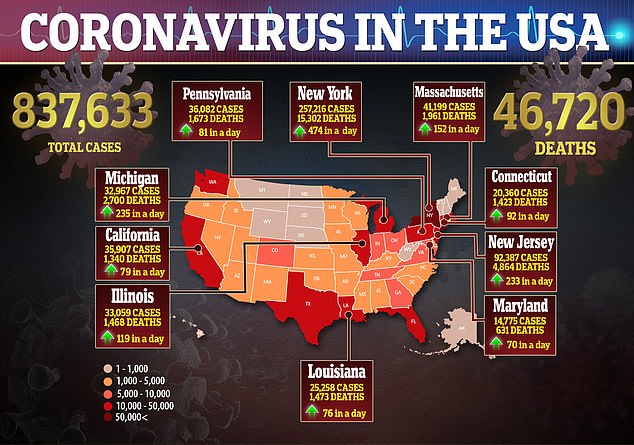 Above shows the number of coronavirus cases and death in the US as of Wednesday, as well as the country’s hotspots

Over the last several weeks, politicians and doctors have been sparring over whether or not to use hydroxychloroquine against the novel coronavirus.

Some say the drug is a ‘game-changer’ while others argue that the evidence is too thin to recommend it now.

Here is everything you need to know about the drug and its potential benefits:

HOW IS IT BEING USED?

Hydroxychloroquine has been in use since the 1940s to prevent and treat malaria, and to treat rheumatoid arthritis and lupus.

It works by helping tame an overactive immune system.

The drug is sold both in generic form and under the brand name Plaquenil in the US.

Physicians also can prescribe it ‘off label’ for other purposes, as many are doing now for COVID-19, the disease caused by the virus.

One lab study suggested hydroxychloroquine curbed the ability of the virus to enter cells.

Another report on 11 people found it did not improve how fast patients cleared the virus or their symptoms.

A third report from China claimed the drug helped more than 100 patients at 10 hospitals, but they had various degrees of illness and were treated with various doses for different lengths of time.

Outside researchers say the patients might have recovered without the drug because there was no group in the report that didn’t get the drug for comparison.

Finally, researchers in China reported that cough, pneumonia and fever seemed to improve sooner among 31 patients given hydroxychloroquine compared to 31 others who did not get the drug.

However, fewer people in the comparison group had cough or fevers to start with. Four people developed severe illness and all were in the group that did not get the drug.

These results were posted online and have not been reviewed by other scientists or published in a journal. Larger, more rigorous studies are underway now.

The drug can cause heart rhythm problems, severely low blood pressure and muscle or nerve damage.

Taking it outside of a scientific experiment adds the risk of not having tracking in place to watch for any of these side effects or problems and quickly address them if they do occur.