Pictured: The flooded bus which sparked a rescue operation

Pictured: The flooded bus which sparked a rescue operation during days of wild weather as backpacks bob on the muddy surface

Shocking pictures have emerged of a bus that was filled with water during wild weather, leaving ten people trapped inside.

The bus in Newcastle, on the New South Wales north coast, became engulfed by rising floodwaters on Monday after the state suffered a weekend of dangerous conditions.

A picture posted to Reddit showed muddy water covering the courtesy seats designed for the elderly and people with disabilities at the front of the bus.

A new image of the inside of the bus that flooded in Newcastle, on the NSW North Coast, on July 27 appeared on the social media platform Reddit (pictured)

Backpacks and documents are seen bobbing on the surface of the water.

Earlier images showed the front of the bus submerged in water halfway up the windscreen.

Ten people were rescued when emergency services were called to University of Newcastle at Callaghan at 5:30pm, according to the ABC.

Within two hours 117mm of rain fell in the area after severe weather brought flash flooding and dangerous winds.

Social media users took a moment to make some light-hearted responses to the dangerous situation.

One social media user said: ‘This is how my uncle got to school every day, only his bus apparently had electric eels.’ 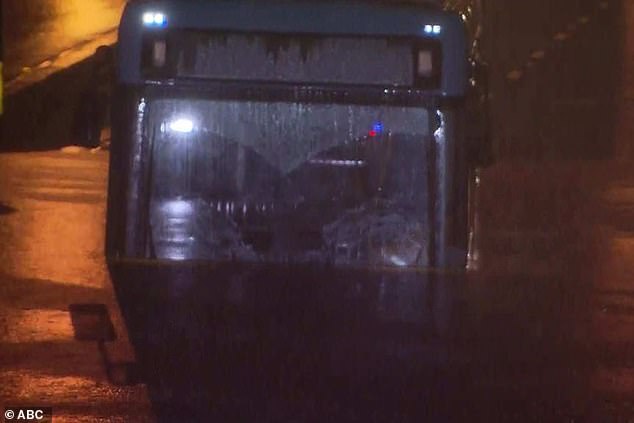 Another asked if everything was alright.

A third said: ‘You might have to swim to tap off your opal card.

‘Middle machine looks closed so it’s a muddy swim to the front.’

Others were less than impressed with the actions of the driver, with one social media user formerly from the area saying the spot is well-known to be a flash flooding area.