In the clip, filmed at the Conservative Party conference in Manchester in 2015, Boris Johnson is pelted by plastic balls by protesters and is ushered through a metal arch by uniformed police officers.

With this year’s Tory Conference currently underway in the city, the MP for Tottenham posted the video with no reference to its age, tweeting: ‘Boris Johnson as popular as ever.’

GMB presenter Piers Morgan retweeted the post to say: ‘That video is from 2015, so this is not only fake news, but also a very hypocritical way for a Labour MP to respond to a politician being attacked in this way.

‘If it was one of your colleagues, Mr Lammy, you’d go nuts.’

At the time of writing Mr Lammy has neither apologised nor deleted the tweet.

Piers Morgan accused David Lammy MP of hypocrisy and fake news after the latter appeared to condone protestors throwing objects at Boris Johnson. The clip was filmed in 2015 byut Mr Lammy posted it this morning

The tweet from Mr Lammy – who has publicly opposed implementing the outcome of the 2016 Brexit referendum since 24 hours after the result was announced – garnered thousands of Likes but hundreds of replies and corrections.

Many joined Mr Morgan in arguing it was hypocritical of Mr Lammy seemingly to condone the throwing of missiles at elected politicians.

One respondent wrote: ‘So you support politicians being attacked in this manner, yet you cry your eyes out about ‘inflammatory language’. Do you even see how foolish you look?’

A third said: ‘An old video but it’s good to know you condone this type of abuse. I assume if it happens to Corbyn you’ll be just as vocal about how unpopular he is. Them are the rules, no?’

Several more people took to Twitter to point out that, while Mr Johnson may face protests around the country both then and now, polling shows he is considerably more popular than Labour leader Jeremy Corbyn, whose approval rating recently fell lower than any Labour leader at any time in history. 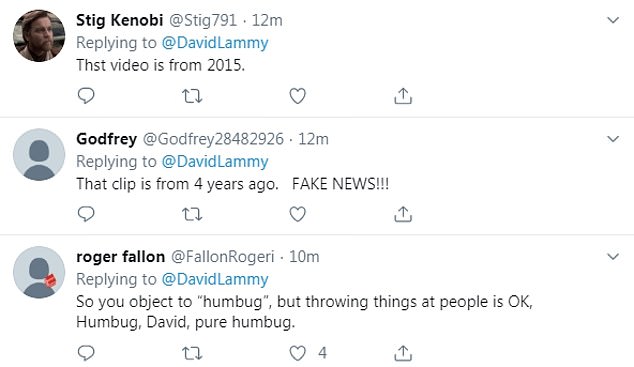 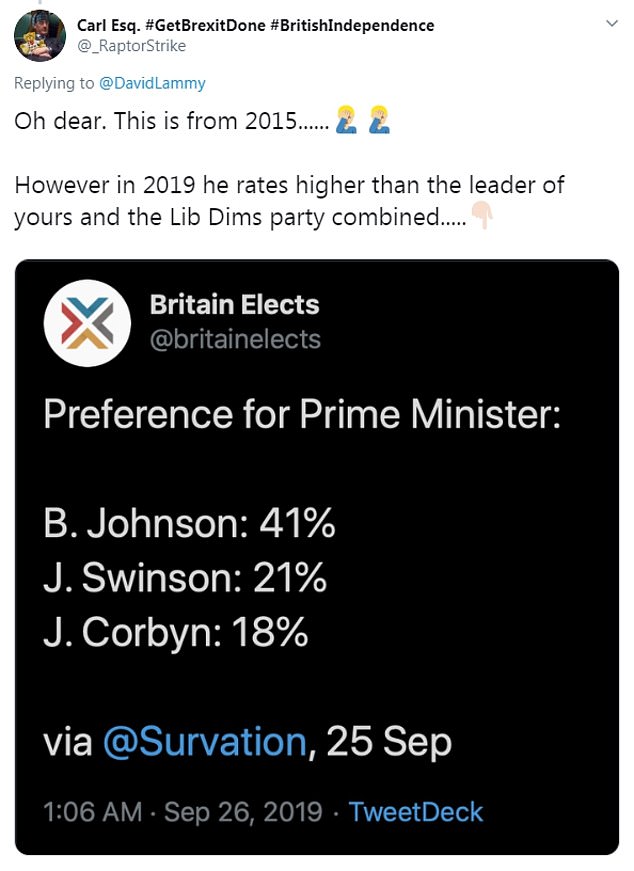 In 2015 – the conference shown in the clip – Conservatives were forced to run a gauntlet of abusive activists for days in a row after anti-austerity protesters lined the route into the party’s annual conference in Manchester.

Dozens of activists shouted abuse at MPs, delegates and journalists trying to enter the conference, with police putting up metal barriers and trying to hold back the crowds.

Then-Mayor of London Boris Johnson had soft plastic balls thrown at him as he went in to the hall where George Osborne gave a speech insisting that the Tories were ‘builders’ who could be trusted to take the country into the future. 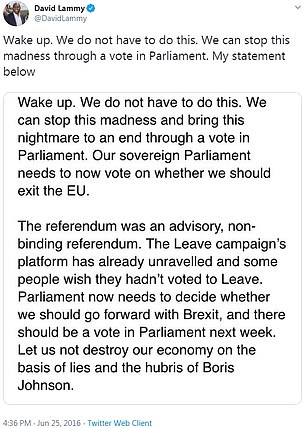 Four people were arrested at the 2015 conference after those attending the conference complained of being harassed by demonstrators lining the route to the venue.

One delegate had an egg thrown at him, while several journalists were spat at by anti-Tory protesters.

Conservatives had previously been warned to hide their pass while walking around Manchester to avoid being abused by passers-by.

In 1984, the Conservative conference in Brighton was targeted by the IRA, who killed five people by planting a bomb at the Grand Hotel where Margaret Thatcher was staying.

David Lammy MP, who elected to represent the constituency of Tottenham in London in 2000, served as a minister in the Blair and Brown governments and now sits on Labour backbenches.

Despite the 2016 referendum being legally ‘advisory’ upon Parliament, all political leaders promised its result would be implemented.

Nonetheless on June 25 2016, barely 24 hours after the result of the referendum was known, Mr Lammy tweeted: ‘Wake up. We do not have to do this. We can stop this madness through a vote in Parliament.’