For drivers clocking up an average speed of just 8mph in central London it may sound like a joke at their expense.

But a 20mph speed limit will be introduced on every road managed by Transport for London by 2020 under new road safety plans unveiled today.

The measure was unveiled by London Mayor Sadiq Khan as part of the Vision Zero initiative aimed at eliminating deaths and serious injuries from the capital’s transport network.

But the plans were labelled ‘ludicrous’ and indicative of a ‘nanny state’ on social media, with one Twitter user saying: ‘Maybe just stop cars altogether and just go back to horse and cart’.

The proposed speed limits on the Transport for London Road Network (TLRN), which makes up 5 per cent of London’s roads but carries one third of traffic. Green is for 20mph, blue for 30mph, pink for 40mph, red for 50mph and purple for 70mph 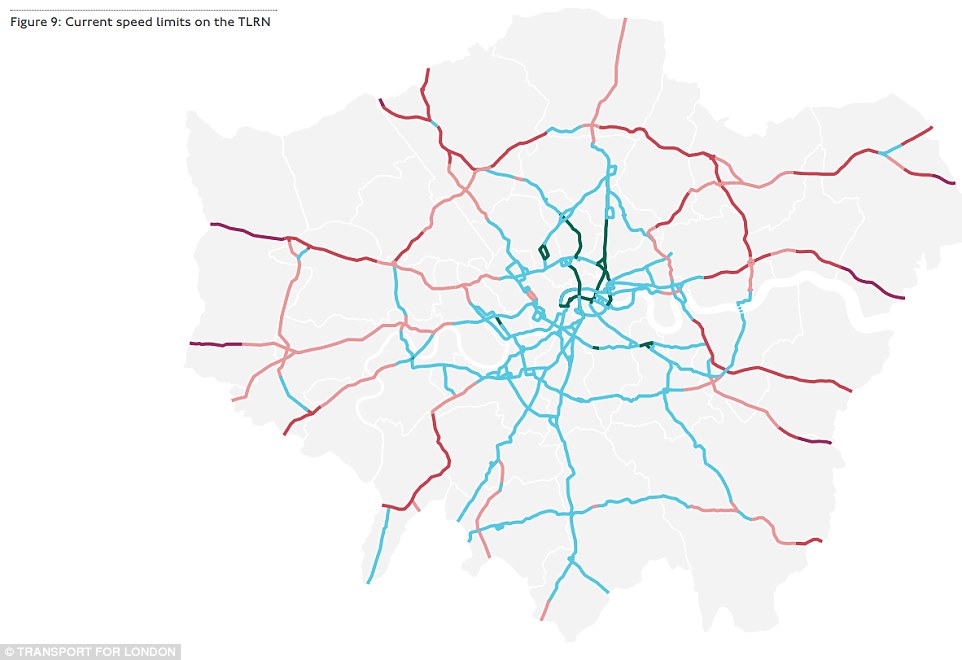 The proposals have been put forward by Mr Khan, Transport for London, and the Metropolitan Police.

It is proposed that vehicles travelling on all of London’s red routes – roads managed by TfL – which are inside the congestion charge zone will be subjected to a 20mph limit.

TfL is also considering introducing the same limit on its roads in other town centres and high-risk locations across the capital.

Pedestrians hit by a vehicle driven at 20mph are five times less likely to be killed than if they are hit at 30mph, according to the mayor’s office.

More than 2,000 people are killed or seriously injured on London’s roads each year.

Mr Khan said: ‘I don’t accept that deaths and serious injuries on London’s roads are something we just have to put up with. Every single death or serious injury results in heartache and tragedy for those affected, and their loved ones. 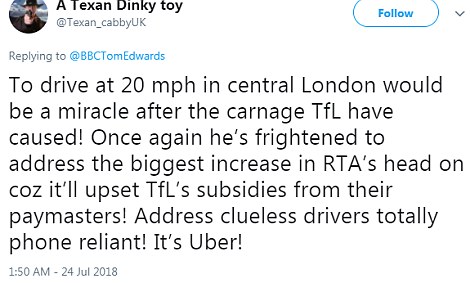 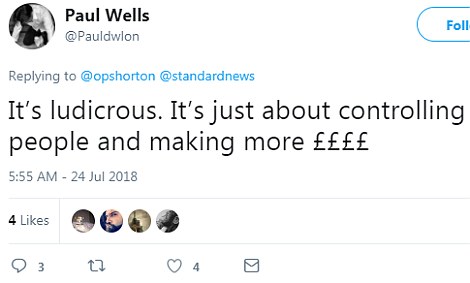 The plans were labelled ‘ludicrous’ and indicative of a ‘nanny state’ on social media, as Twitter users voiced their ire

‘Our bold and far-reaching plans being announced today are some of the most ambitious in the world, and start from the basis that no death or serious injury on London’s roads should be treated as acceptable or inevitable.’

The Met is pledging to intensify its focus on the most dangerous drivers and to carry out widespread high-visibility roadside operations and patrols.

But the plans have raised eyebrows at motoring group the AA. Its president Edmund King said: ‘Traffic speeds in central London really haven’t changed much since the horse and cart some 100 years ago.

‘Most drivers would be delighted if they could drive at 20mph across London during the day but in reality traffic speeds are less than half of that. TfL estimate average speeds are just 8mph.’

Mr King suggested the 20mph limit should only apply when the congestion charge zone applies – between 7am and 6pm from Monday to Friday.