A size 26 roller coaster fan has shared her theme park experience of struggling to fit into different seats – as she said society ‘isn’t built’ for plus-size people.

Heather O’Neill, 26, from Kent, who is a size 24-26, had planned to go to Thorpe Park in Surrey, but said she was left petrified ahead of the event in case she was unable to fit into the rollercoasters.

She then filmed herself trying the seats – and came to the conclusion that many rollercoasters are not made for over-sized people – before sharing the clips on TikTok, where she quickly went viral.

The mental health nurse said she would like to see society become more accessible for those who are different than ‘the norm’, adding: ‘Theme parks, aeroplanes, buses – society isn’t built for anyone who is outside of society’s norm of straight, able bodied and slim.’

Heather O’Neill, 26, from Kent,  who is a size 24-26, has shared her theme park experience of struggling to fit into different seats – as she said society ‘isn’t built’ for plus-size people 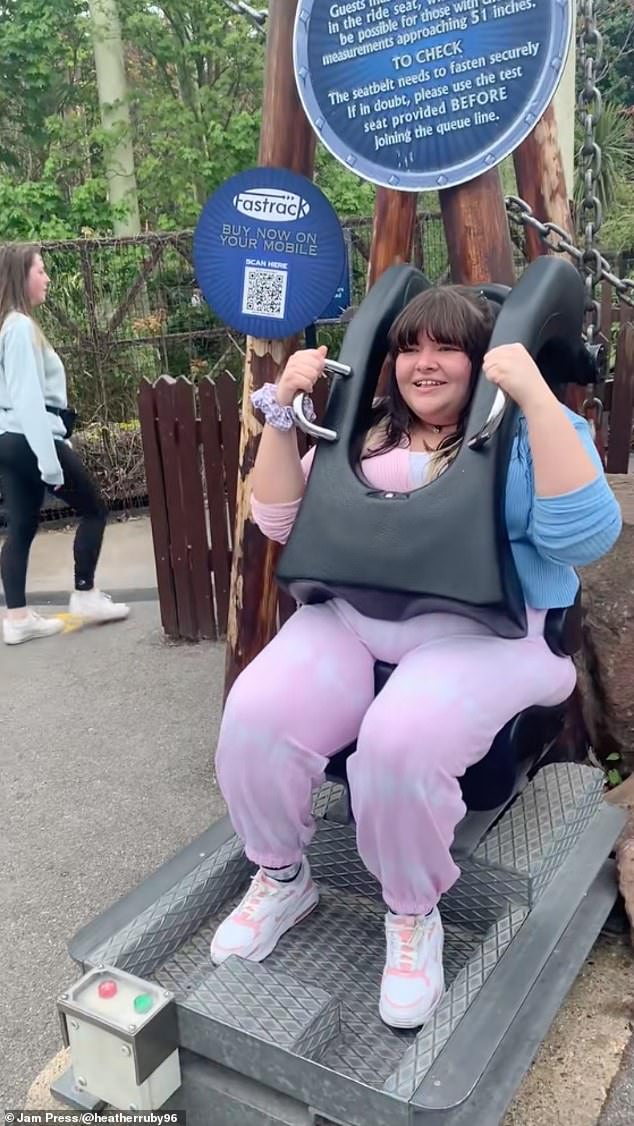 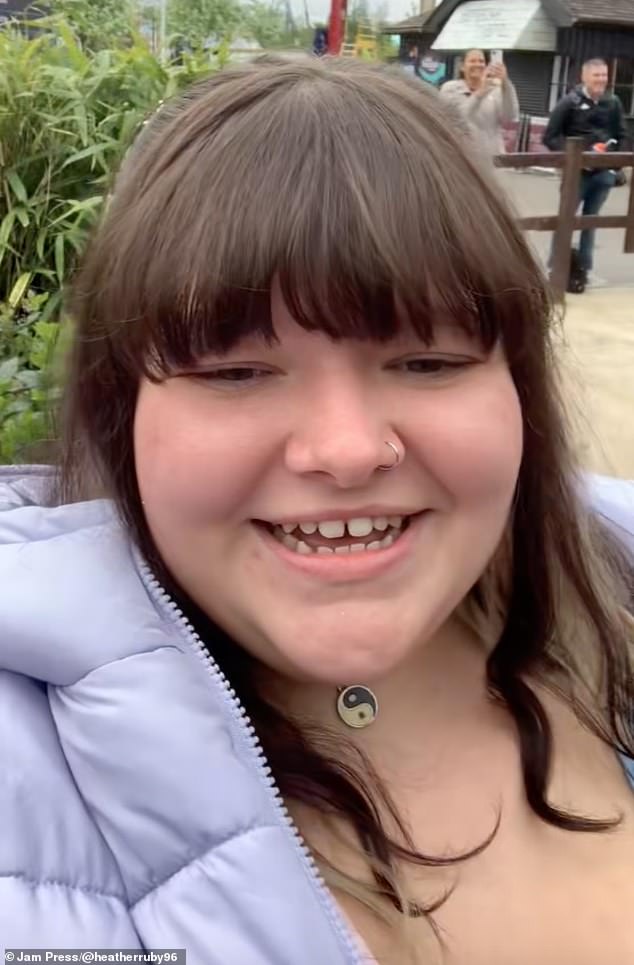 Heather, a mental health nurse, has said how she nearly didn’t go on her trip due to worries over her size.

She added her fears have increased since the death of Tyre Sampson, 14, in March.

Tyre died at Florida’s ICON park after being 96lbs over the weight safety limit and falling from a ride.

Heather said: ‘I was so nervous to go, I nearly cancelled out of fear that I wouldn’t fit on the rides. 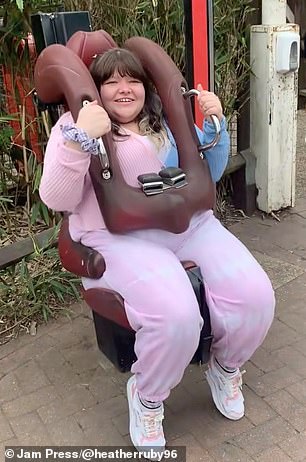 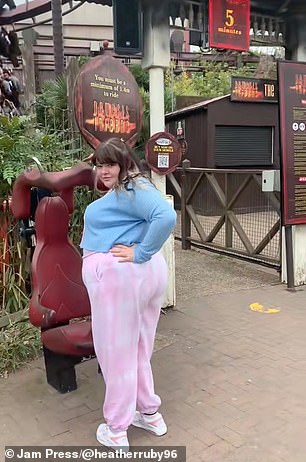 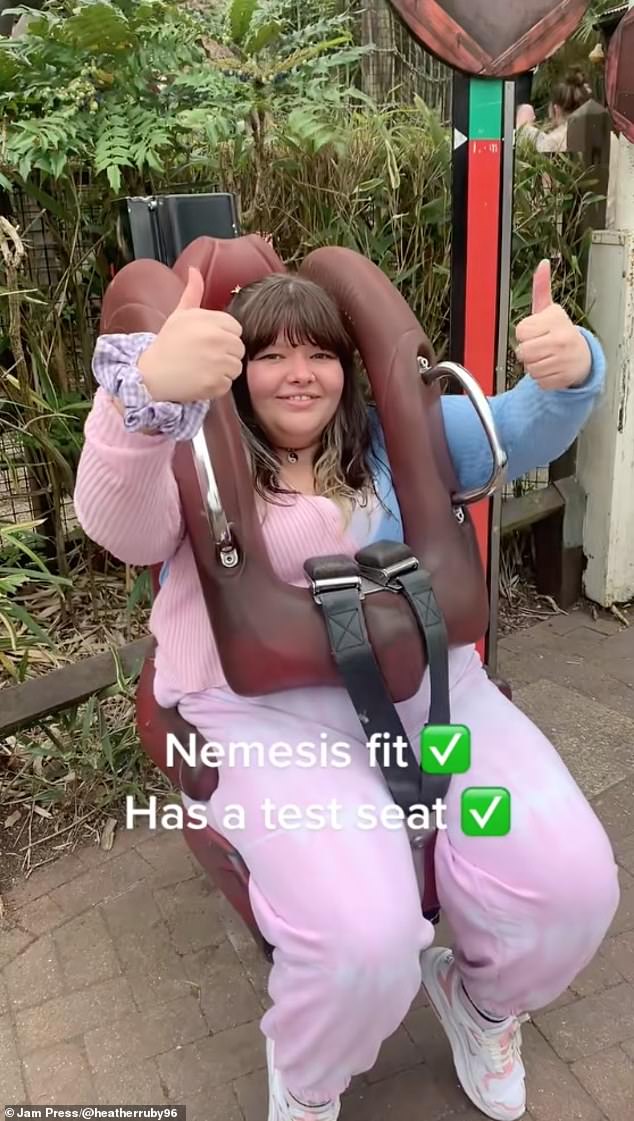 ‘The fact that I even have to think about if I will fit the rides is the first difference [in being a plus size customer].

‘The feeling nervous before going, the pushing the seat down trying to get it to close. Worrying about how safe the ride will be for me, after that poor man died on a ride in America.

‘It’s the same as flying – worrying if the seat on the plane will be too small or I’ll need a seat belt extender.’

She added: ‘I used all the test seats that I could find, which most people don’t have to do.

‘But rides aren’t built for plus size/fat people, it’s about accessibility and making spaces inclusive for all bodies and accessibility needs. 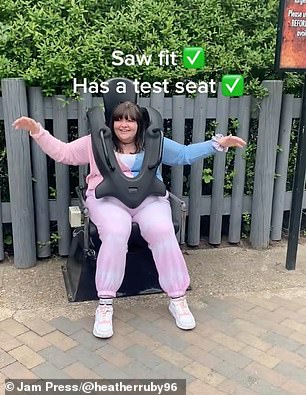 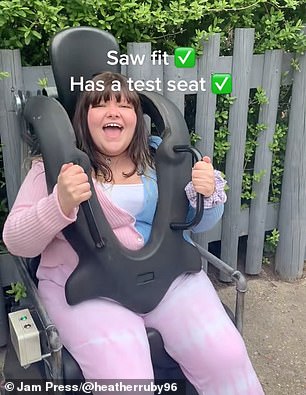 Hannah confessed she ‘used all the test seats she could find’ during the day out to ensure she could ride safely (pictured, on the Saw Fit seat) 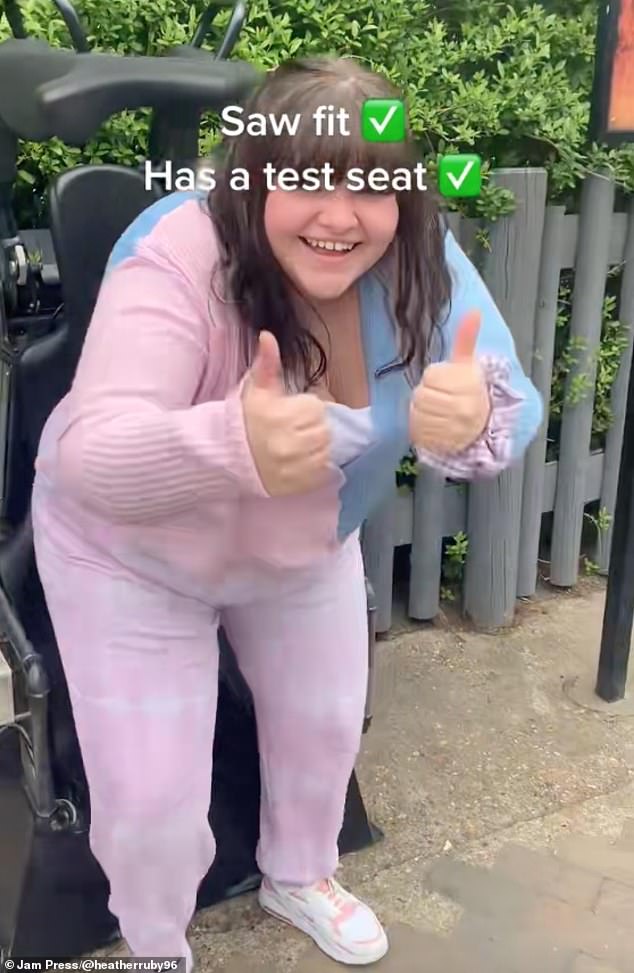 Despite finding she could fit into a number of the seats in the park, and testing out the safety seats before hand, she confessed she felt it ‘wasn’t built for fat people’ 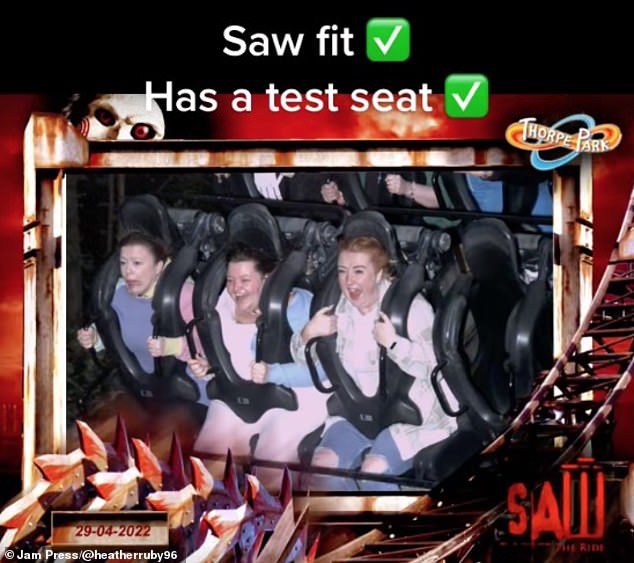 ‘I feel like the staff did everything they could, were helpful and kind, but Thorpe Park is not built for fat people like me.’

Heather decided to film her experience at the park, showing herself trying out the different test seats available.

While she did fit in the majority of seats and could go on most rides, she found she did not fit into the Samurai ride test seat – though still managed to ride the coaster – and was also not able to ride the Colossus.

After struggling with the test seat, Heather says: ‘I tried to go on Colossus anyway – didn’t fit but staff were really nice and discreet and gave me a fast pass to another ride, so not bad.’ 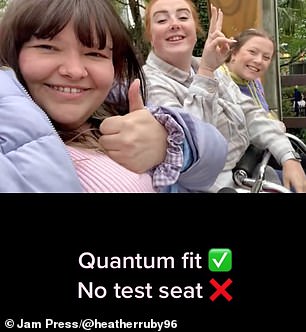 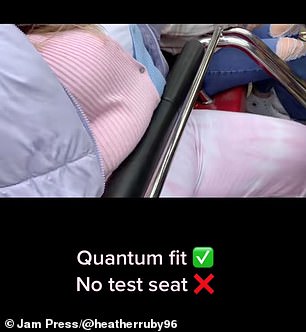 In a TikTok video she shared online, Hannah tested out the different rollercoasters, including Quantum

Despite not fitting in some seats, Heather didn’t let it dampen her day and explained the staff were ‘helpful and kind’.

She decided to share the entire experience on her TikTok in a bid to ease other plus size rollercoaster fans’ worries.

The video racked up 29,000 likes and 354,000 views, with viewers flocking to the comments section to share their thoughts.

One person said: ‘You saved yourself from the concussion on Colossus, call it a blessing that ride HURTS.’ 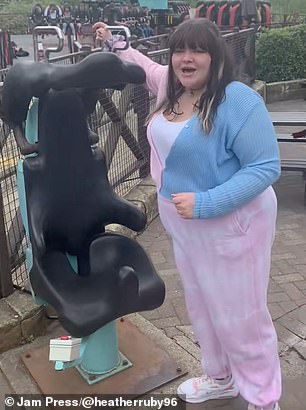 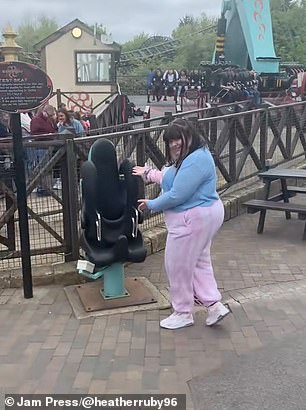 Despite not fitting in some seats, Heather didn’t let it dampen her day and explained the staff were ‘helpful and kind’ 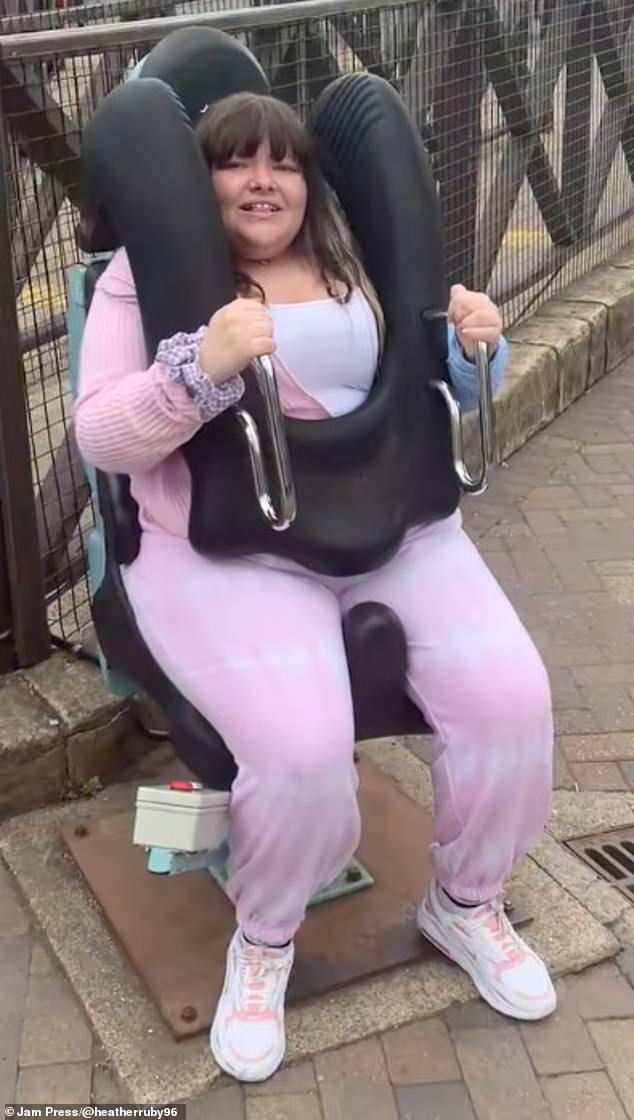 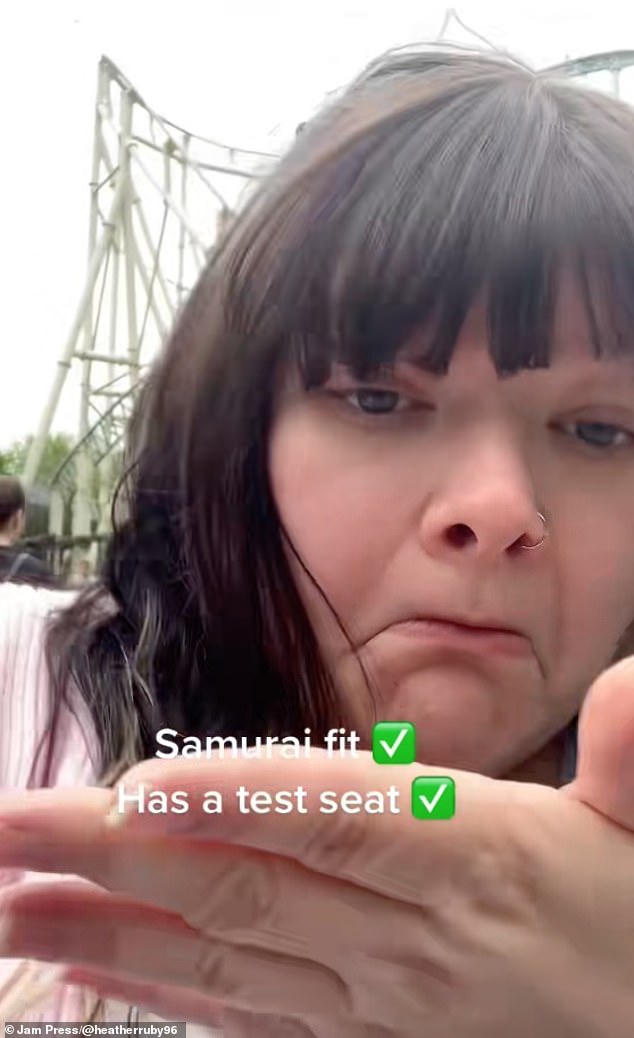 While she did fit in the majority of seats and could go on most rides, she found she did not fit into the Samurai ride test seat – though still managed to ride the coaster

‘Wish they could put test seats in a booth or something, not out in the open. I’d get so anxious having to do it in front of people,’ commented another user.

Someone else said: ‘I’m so so grateful for this!! I would have NEVER gone to a theme park before but might just have to try now!’

‘I’m glad they’re starting to have test seats. I went to Alton Towers years ago and it was humiliating having to get off rides instead,’ another viewer commented.

One person added: ‘First time I ever tried a test seat was Nemesis Inferno and I got stuck in it for about 20 minutes.’

‘Thank you! I avoid theme parks like the plague because I don’t wanna not fit you are a god send,’ said another user. 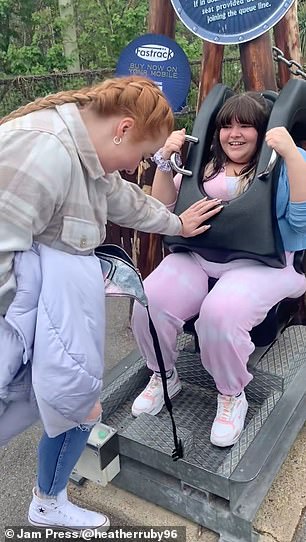 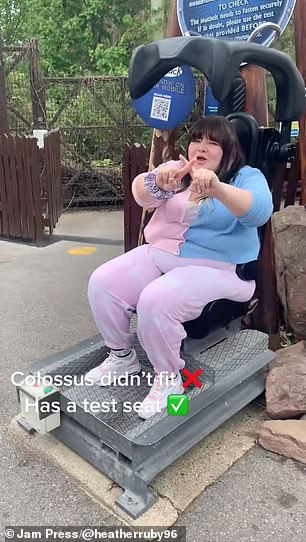 For Heather, it was important to share her experience with more nervous customers in order to help them know which rides they could and could not ride safely (left and right) 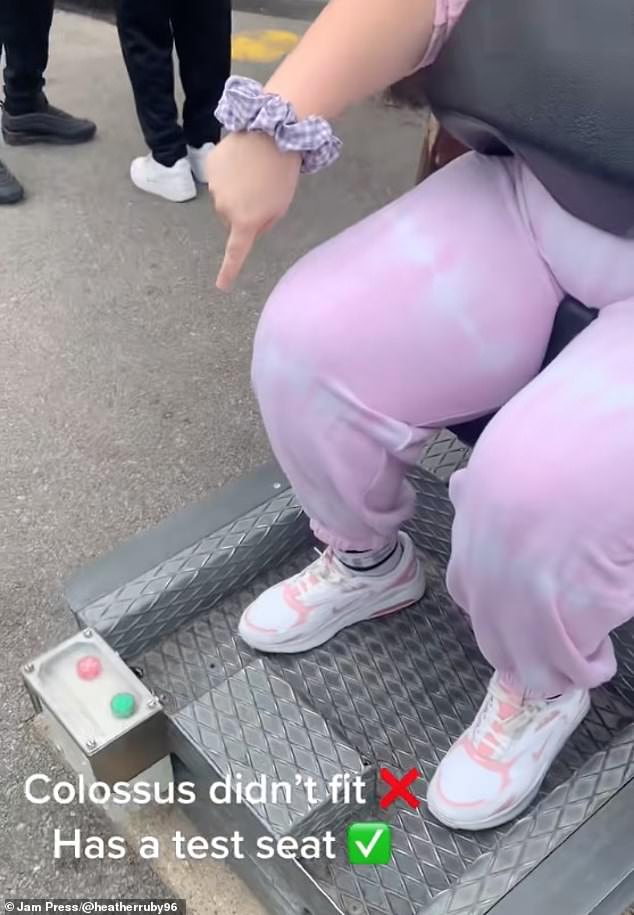 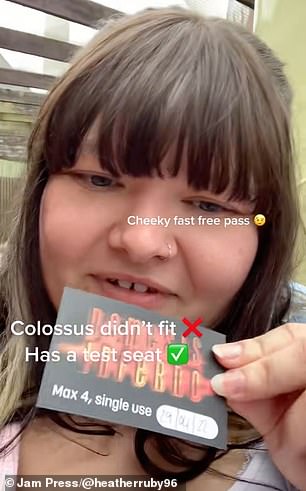 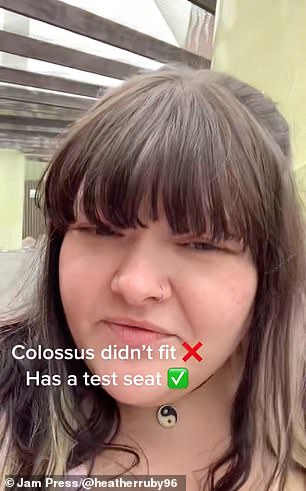 While she didn’t fit, she said the staff were ‘really nice and discreet’ and she was given ‘a fast pass to another ride’

Someone else said: ‘Getting in the seats have always stopped me from going to theme parks, I can’t stand the judgement and prejudice.’

‘Colossus has always been the most fat phobic ride I barely fit and I’m not that big,’ another person commented.

One fan said: ‘On behalf of plus size thrill seekers thank you so much for doing this.’

‘It terrifies me going to these places in case I don’t fit! Can’t deal with the embarrassment,’ commented another follower.

Someone else added: ‘Thank you for normalising this! No one should miss out because of the anxiety this creates!’

For Heather, it was important to share her experience with more nervous customers.

After Hannah shared her experience online, many other TikTok users said they had also faced difficultie s

She said: ‘I was looking for a plus size guide to Thorpe Park before I went, to see if I could fit on the rides and make me feel less nervous to go.

‘I wanted to help fellow fat people out, to give them a positive, unfiltered, honest guide on what rides they could actually fit on, and what rides had test seats so they could see if they would fit.

‘Fat people deserve accessibility and to enjoy theme parks too.’

A spokesperson for Thorpe Park said, ‘At Thorpe Park Resort, we care deeply about creating magical experiences that are inclusive for all of our guests.

‘We have always strived to create accessible attractions where people can be themselves and enjoy fun experiences together.

‘From team training to listening to guest feedback, our priority is always focused on ensuring every one of our guests enjoys a magical day out with us at the UK’s most thrilling theme park.’

350lb teen, 14, who fell to his death from 430ft ICON park drop tower was 63lb over the maximum weight limit for the ride and operator claims he WAS locked into his seat, accident report reveals

Tyre Sampson fell to his death in March from the FreeFall drop tower at ICON Park on International Drive, which sees riders hoisted 430 feet in the air before forcefully dropping them at speeds reaching 75mph, exerting massive G-forces in the process.

Sampson, who was known at Big Tick to his friends and was a rising middle school football player, appeared to come out of the seat just as magnets activated to slow the ride down on its descent.

‘When the magnets engaged, the patron came out of the seat. Harness was still in a down and locked position when the ride stopped,’ reads part of a report filed by the operator with the fair rides division of the Florida Department of Agriculture and Consumer Services that was looking into the accident in March.

Fourteen-year-old Tyre Sampson, from Missouri, died at the Orlando Free Fall ride at the ICON amusement park in March

But the the ride’s operations and maintenance manual dictated that the maximum weight limit the ride could tolerate was around 287 pounds.

‘Be careful when seeing if large guests fit into the seats. Check that they fit within the contours of the seat and the bracket fits properly. If this is not so — Do not let this person ride,’ the manual explicitly states.

At this stage, it is not known whether Sampson fit the contours of the seat or if the bracket fit properly.

Tyre was a giant for his age, already the size of an NFL offensive lineman. His family says he aspired to play pro football, like many kids with athletic ability who see a way to buy their mother a house and lift everyone in the family to a new level. 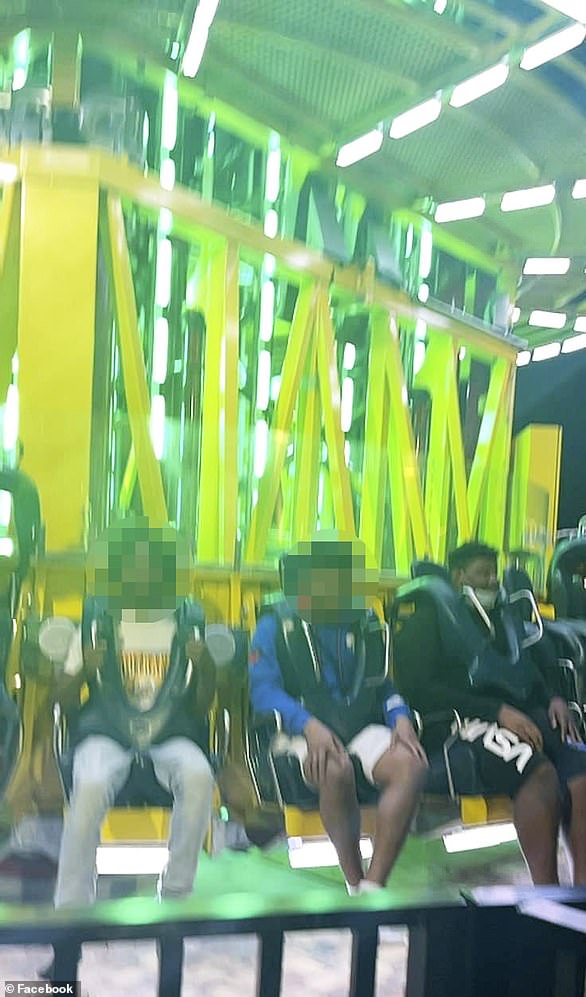 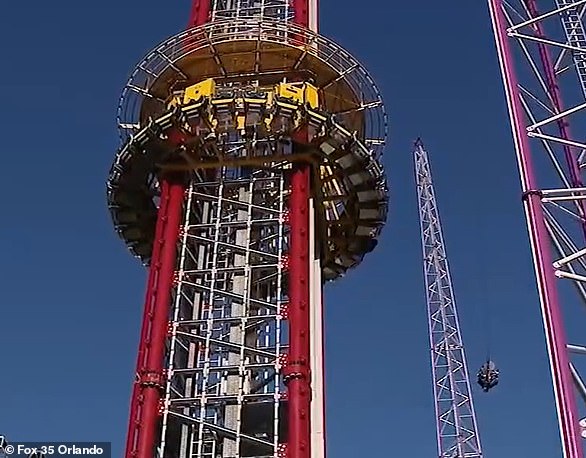 The tower sees riders hoisted 430 feet in the air before forcefully dropping them at speeds reaching 75mph, exerting massive G-forces in the process 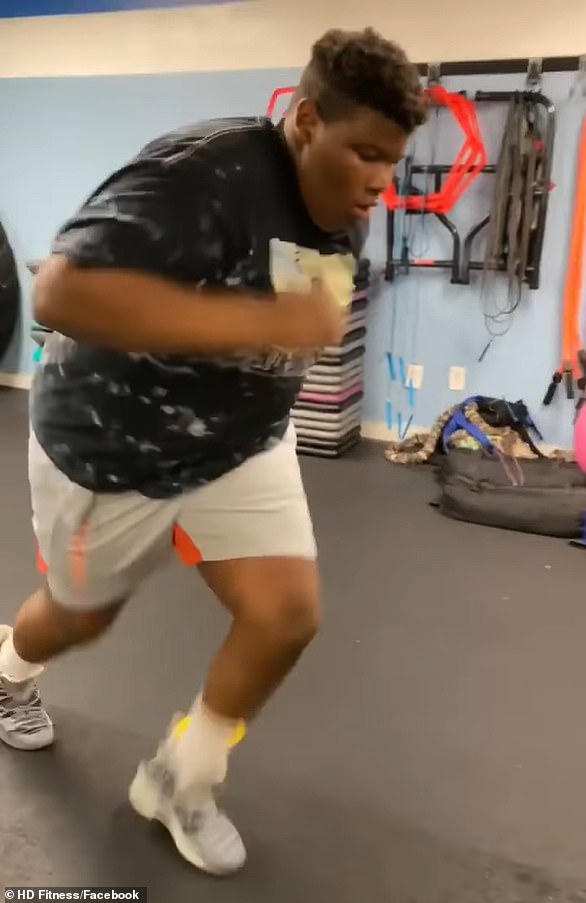 The ride had a maximum weight limit of 287lbs, but Sampson who was a rising football star at his school weighed closer to 350lbs