Online trading firm Plus500 is anticipating full-year revenues and earnings to be ahead of expectations following continued growth in new customers.

The group said its third quarter performance was strong despite ‘more stable market conditions’ and was boosted by ‘significant investment’ in its contracts for difference (CFD) technology platform.

It added that it was helped by the launch of share dealing platform Plus500 Invest, as well as its purchases of Chicago-based options trading platform CTS and futures commission seller Cunningham Commodities in mid-July.

Tech giant: Financial technology firm Plus500 said its performance was boosted by ‘significant investment’ in its contracts for difference (CFD) technology platform

This followed a period of market volatility that caused a torrid downturn for the firm but helped create a strong rebound in the company’s revenues and earnings in the first half of 2021.

When it reported its first-half results, it showed that compared to the same time last year, underlying profits declined by almost half, revenues were down 39 per cent to $346.2million, and average revenue per user plunged 40 per cent to $1,037.

But against the previous six months its cash balance was up 23 per cent to $722.5million, underlying earnings were 22 per cent higher at $187.6million and revenues grew 12 per cent to $346.2million.

Responding to those results, chief executive David Zruia stated: ‘Having increased our expectations for the outlook for the group, the board is increasingly confident that Plus500 will continue to deliver further growth and consistent levels of cash generation over the medium to long term.’

Today, the Israel-headquartered business said it ‘is continuing to make progress in accessing additional growth opportunities through further organic investment and by targeting potential bolt-on acquisitions.’

Plus500 will wait until 25 October to provide extensive financial details on their most recent quarterly trading period. City forecasts do suggest the group’s revenues for this year will hit $555.8million while underlying earnings will reach $277.9million. 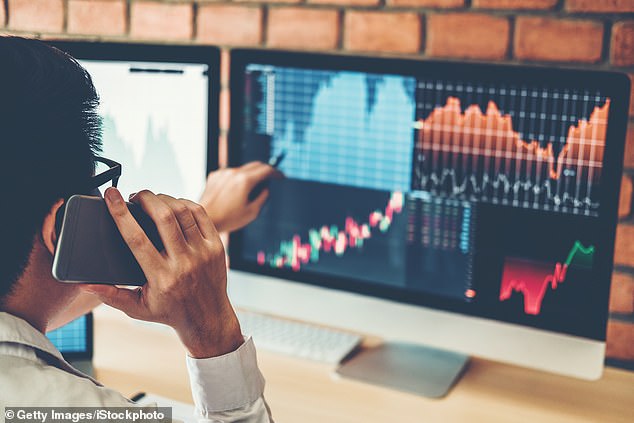 Booming business: Online trading platforms such as Plus 500, Hargreaves Lansdown and AJ Bell have attracted scores of new first-time traders since the pandemic started

Shares in the London-listed firm climbed 5 per cent to 1,449.5p this morning, making it the top riser on the FTSE 350 index and one place ahead of supermarket giant Sainsbury’s.

The fintech group’s shares are now about 0.5 per cent higher than where they were at the start of the year, but more than 9 per cent down on the same point in 2020.

Other online trading platforms such as Hargreaves Lansdown and AJ Bell have attracted scores of new first-time traders since the pandemic started, especially among younger age groups.

Bristol-based Hargreaves Lansdown added a record 233,000 new clients and £8.7billion in net new business in the year to 30 June, while AJ Bell saw customer numbers and total net inflows soar by 30 per cent and £1.8billion, respectively.

At the former company, much of the boom in new customers came from the frenzy surrounding ‘meme stocks’ such as GameStop and AMC Entertainment, but also growing interest in cryptocurrency trading.

Freetrade, Trading212 and eToro have also seen their popularity surge during the coronavirus crisis. In March, eToro achieved its 20 millionth user 14 years after being set up in Israel.