Anti-mask troublemakers have been greeted with a massive show of force in Melbourne where police officers drew a line-in-the-sand against those still believing they could break strict COVID-19 laws.

Police marched upon Melbourne’s Shrine of Remembrance on Friday morning armed with guns, batons and horses in preparation for a planned rally by anti-mask protesters.

Hours earlier, as the sun rose over the iconic monument, flag waving covidiots descended on the war memorial in a lame attempt to push their point.

Police converged on a man on St Kilda Road across the road from Melbourne’s Shrine of Remembrance on Friday. He had a certificate for not wearing a mask and was let go 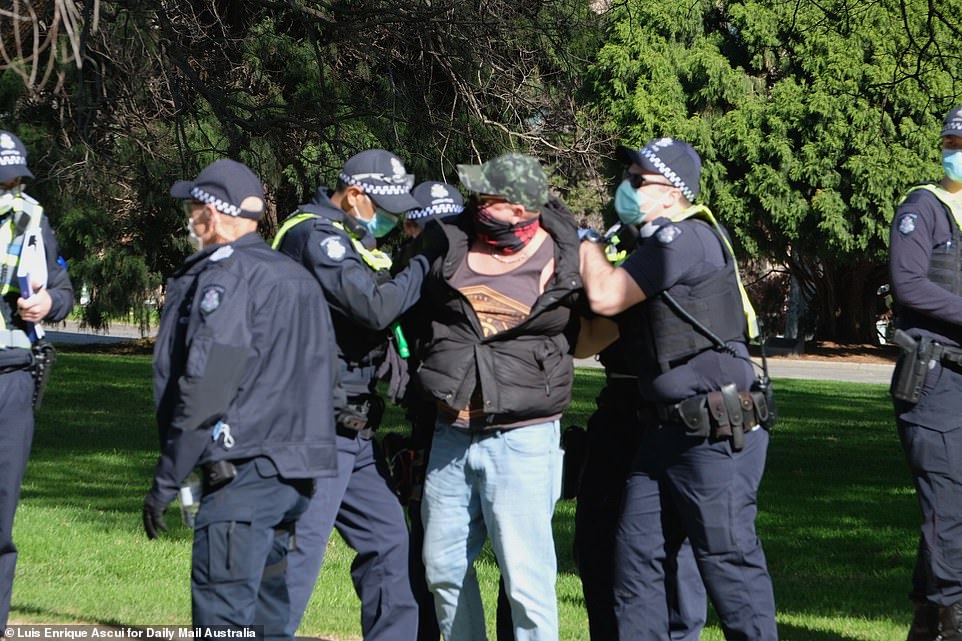 Not so lucky: This man fought the law and the law won. He was fined for sitting about on a park bench and failing to co-operate with police when asked why he was breaking lockdown laws 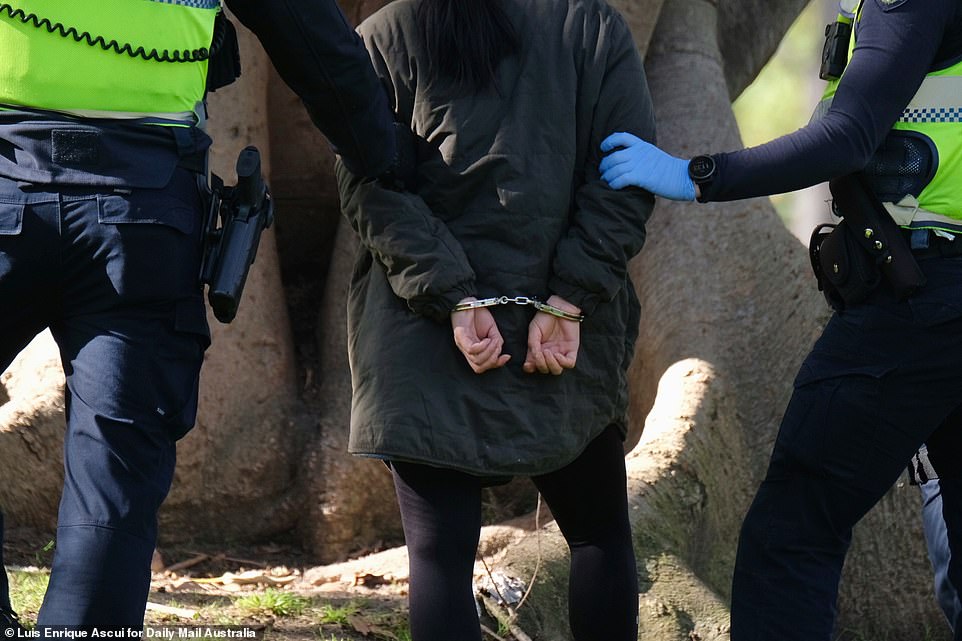 The man’s female friend was taken away in handcuffs after she too failed to comply with police demands. Both were fined and released

It came on a day that saw Victoria suffer its second worst day for infections since the coronavirus pandemic began.

The state recorded 627 new coronavirus cases and eight deaths on Friday, just a day after announcing a record number of cases.

Victoria had 723 cases on Thursday – the darkest day in Australia since the fight against the virus began.

But as the sun rose this morning, more than a dozen protesters were seen gathered around the eternal flame in Melbourne.

The group’s leader spouted off a brief monologue before police moved the protesters on.

Another group of covidiots arrived just on 10am armed with 1901 Federal Red Ensign flags.

They were quickly dispersed, with two people handcuffed and led away by police.

The protests came amid a week of mind boggling protests by anti-mask protesters – the worst of which have included brazen attacks by Melbourne ‘Karens’ at Bunnings warehouses.

Police previously warned they would not mess about with people over blatant, deliberate or obvious breaches of the chief health officer’s directions at the shrine gatherings.

By 11am, a perimeter of police surrounded the area to stop any potential protesters from even reaching the shrine.

Those who had legitimate reason to be in the area were checked for identification and asked why they were there or what they were doing.

Daily Mail Australia observed one man defiantly sitting on a park bench and refusing to move on when asked by police. 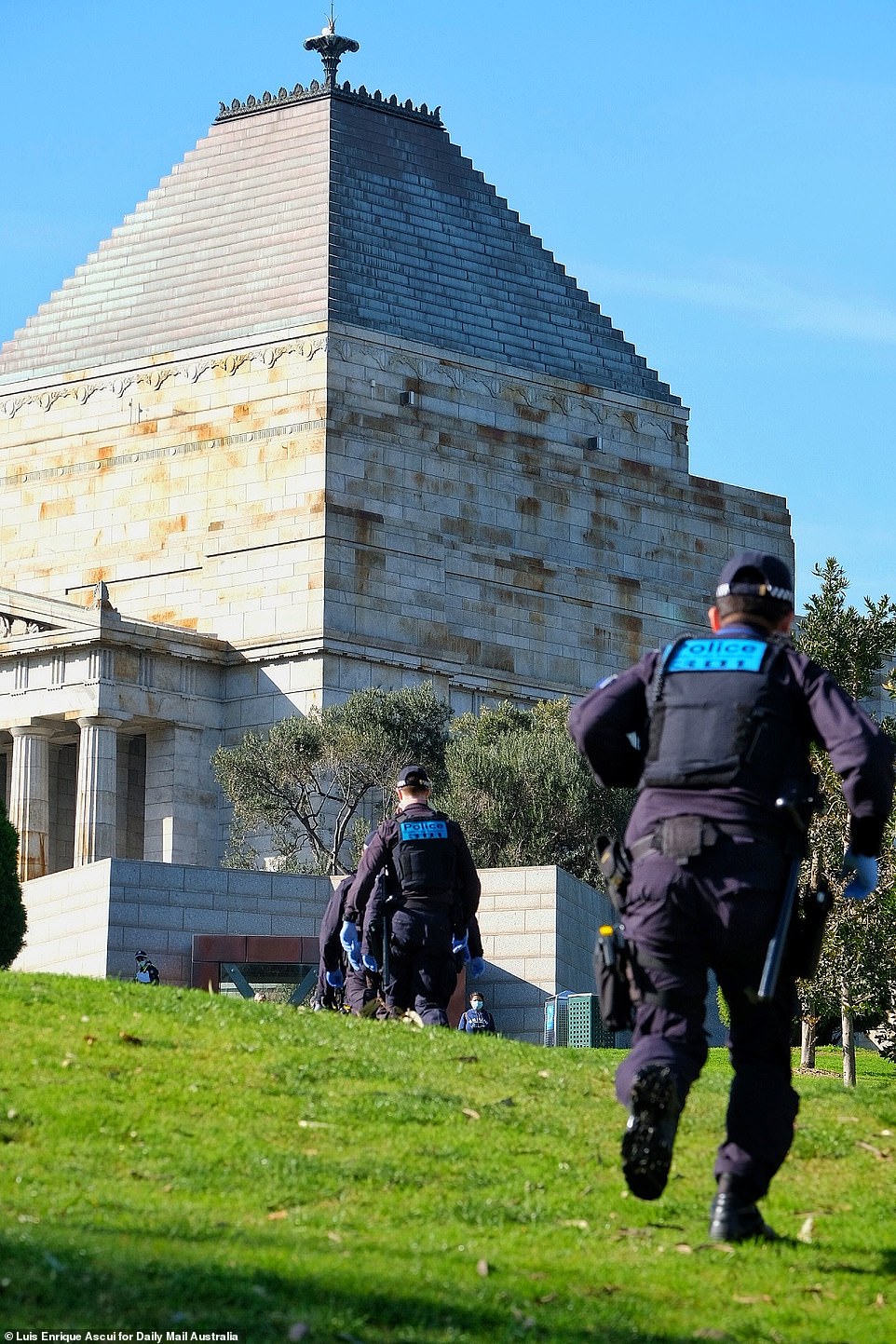 Police spring into action outside Melbourne’s Shrine of Remembrance on Friday. Officers had come out in a huge show of force 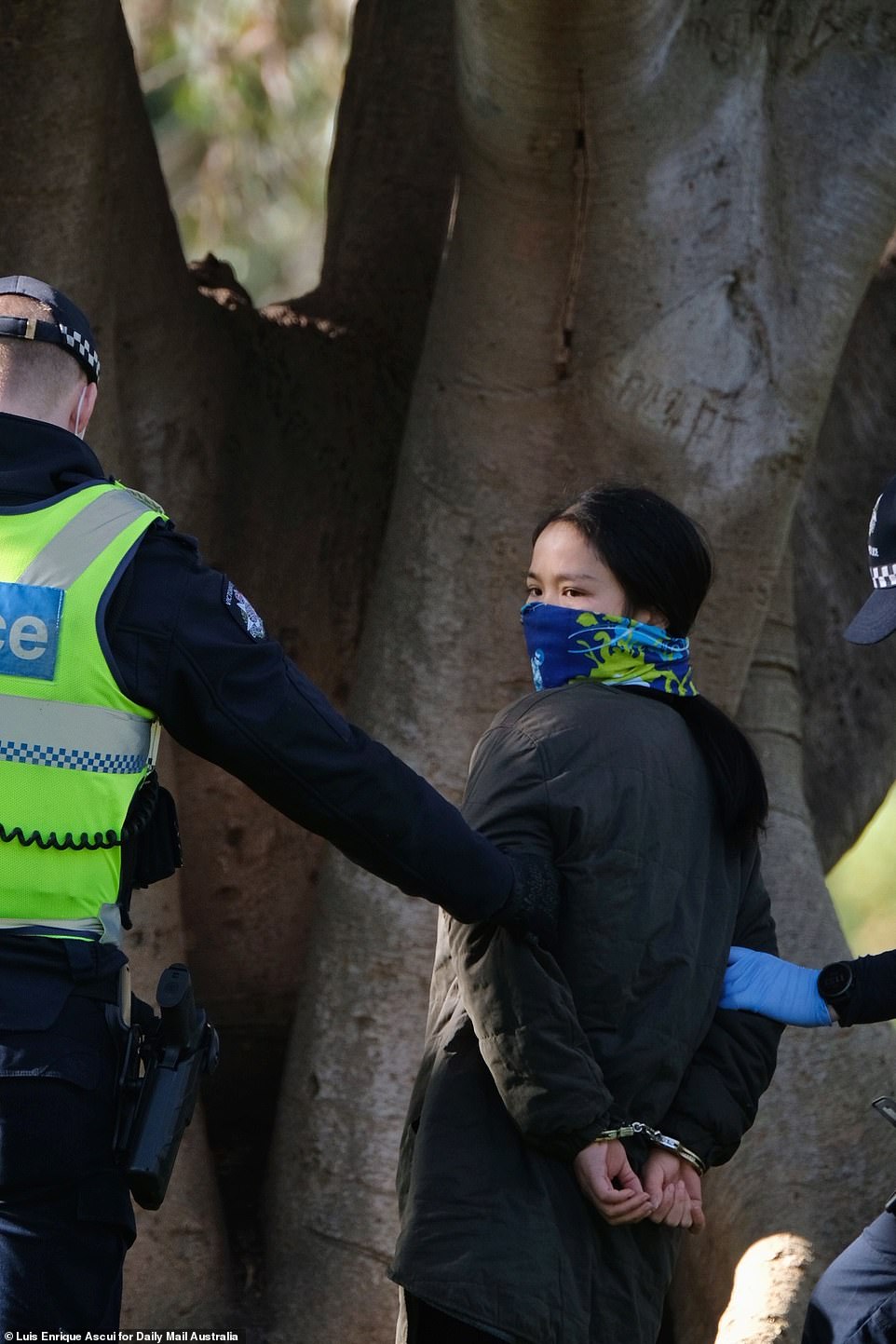 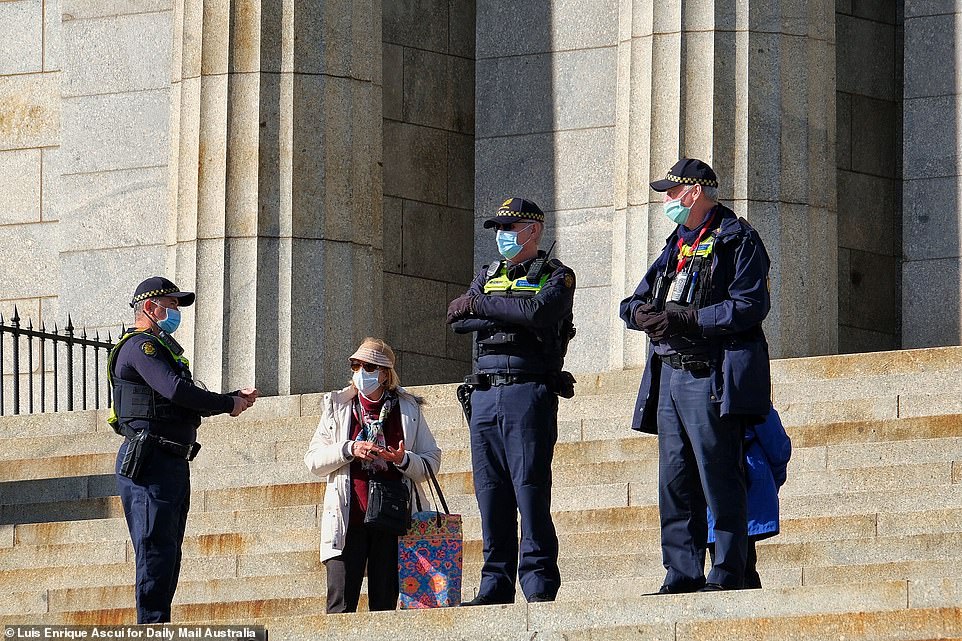 Police questioned people about why they were around the shrine on Friday. There are only four good reasons Melburnians can have for getting about town

He was quickly surrounded and when he refused to comply with simple requests, police pounced.

Officers descended from everywhere as the man was cuffed and escorted to a waiting divisional van.

Nearby, his female friend was also cuffed and taken away for questioning.

Melbourne’s Covidiots Over Past 24 Hours

Six were issued at vehicle checkpoints

A group of 12 people located at an address in Frankston gathered around a fire.

A group of five men gathered at a reserve in Casey, who were all drinking alcohol together

Of the fines issued, 53 were for failing to wear a face covering when leaving home for one of the four approved reasons

Many of these fines were issued to people who had no reason to not be wearing a mask, and refused to accept a mask offered by police or PSOs

Each received a fine before being cut loose back into the community.

The man, who refused to provide his name, continued to criticise the COVID laws designed to save Australian lives.

‘The people who at risk – the old, the frail, the elderly who need protection – how about they stay at home,’ he said.  ‘How about they wear masks, and we go and see them, we put on masks so we don’t give them this virus.’

In a four-minute rant to reporters, the man compared COVID-19 to child birth.

‘Women still die in child birth. Do women go around saying “I’m not going to have a kid because I might die”. No, we take the risk. This is what the world’s all about – taking the risk. And the risk for this is very, very minute and we cower at home like little peasants.’

Moments earlier, police were seen rushing across St Kilda Road to arrest a young man who was not wearing a mask.

The man, who produced a doctor’s certificate indemnifying from wearing a mask, lashed out at police after they released him without charge.

The man claimed he had come to the shrine simply to pay his respects when he was set upon by police.

‘You can do whatever you want, this is Australia, we are free,’ he said.

Upon being moved on along St Kilda Road, the man also stopped to partake in a wild rant before television cameras.

‘We’re stuck in our houses, all we can see is Facebook – there’s a post every two hours from the prime minister or the premier – it’s all bulls**t. It’s all lies. You’re all just following it,’ he said.

‘It’s a hoax of our lifetime … the one certainty of life is death.’

The man said he had avoided a fine and would not pay it even if he had been issued one. 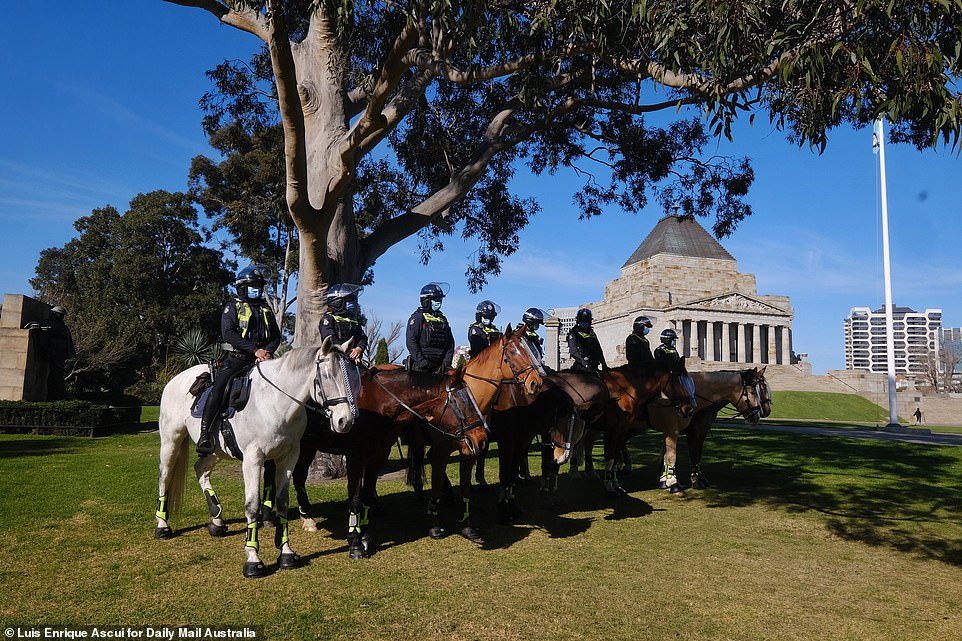 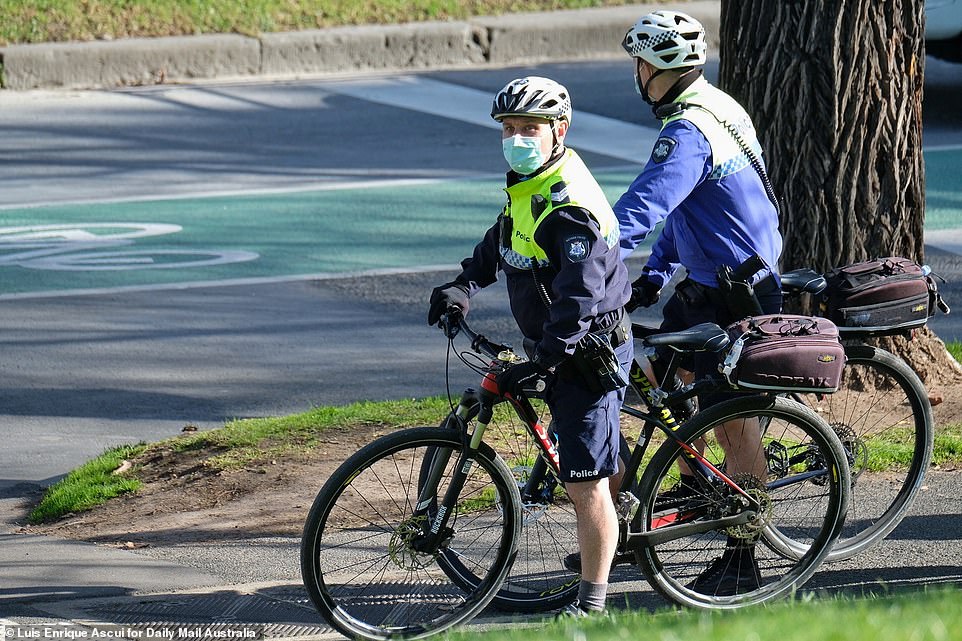 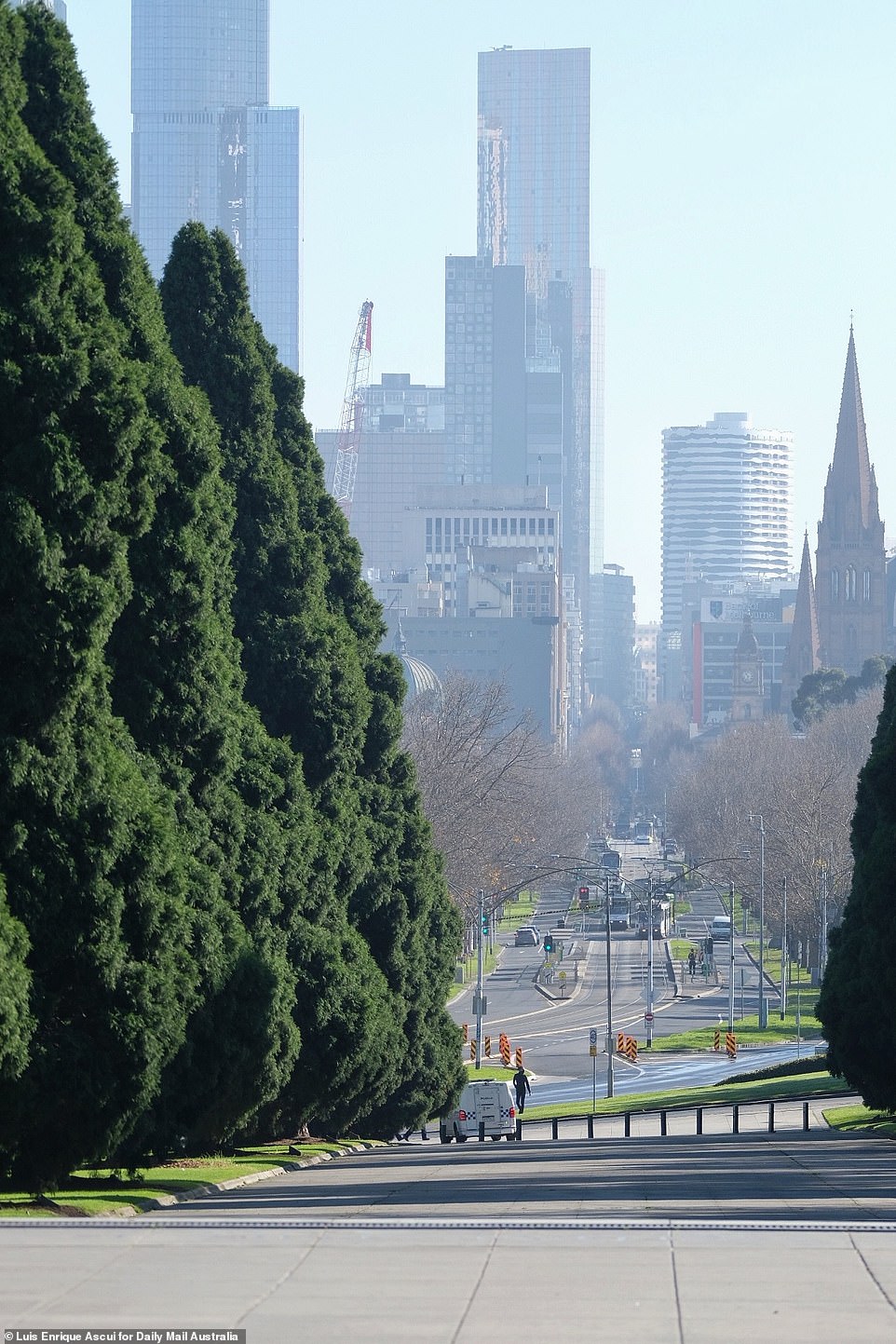 ‘Even if they do it’s going to get thrown out in court. These laws aren’t real. We’ve only got a certain amount of time before they’re all thrown out. It’s not long now,’ he said. ‘It’s not a law, it’s an advisory.’

As the man walked free, just down the road on Spring Street, Premier Daniel Andrews slammed residents for not isolating properly.

He warned that Melbourne’s crippling lockdown could be extended if case numbers continued to rise.

One in four Victorians who should have been self-isolating were not at home when door knocked by the ADF on Thursday, he said.

The premier was in crisis talks with prime minister Scott Morrison on Thursday night discussing the possibility of further restrictions to slow the spread of the disease.

Mr Andrews said an announcement around the possibility of further restrictions would be made as early as Sunday. 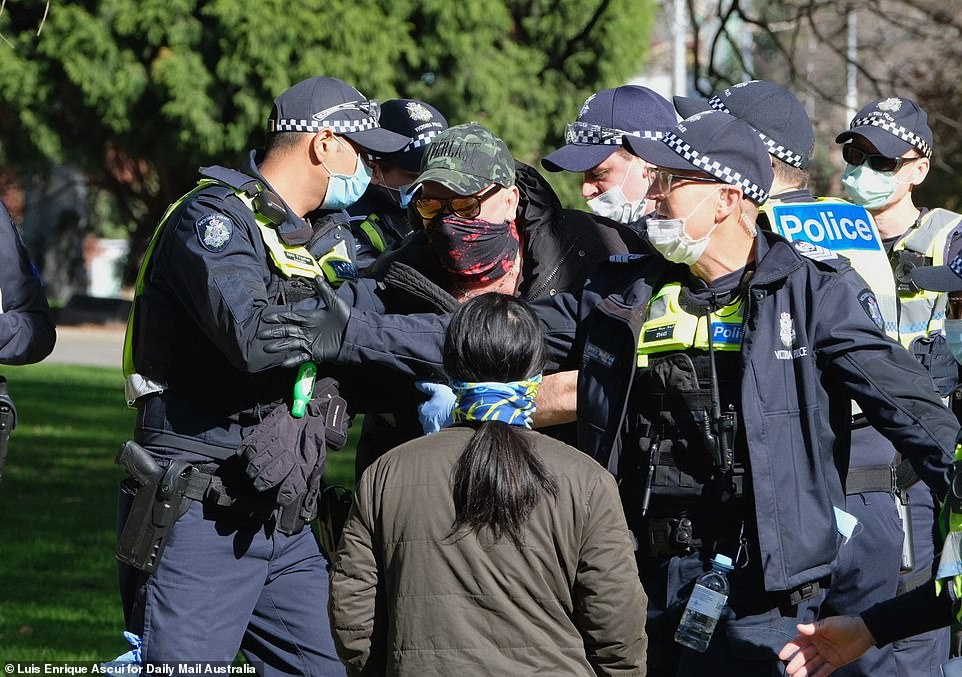 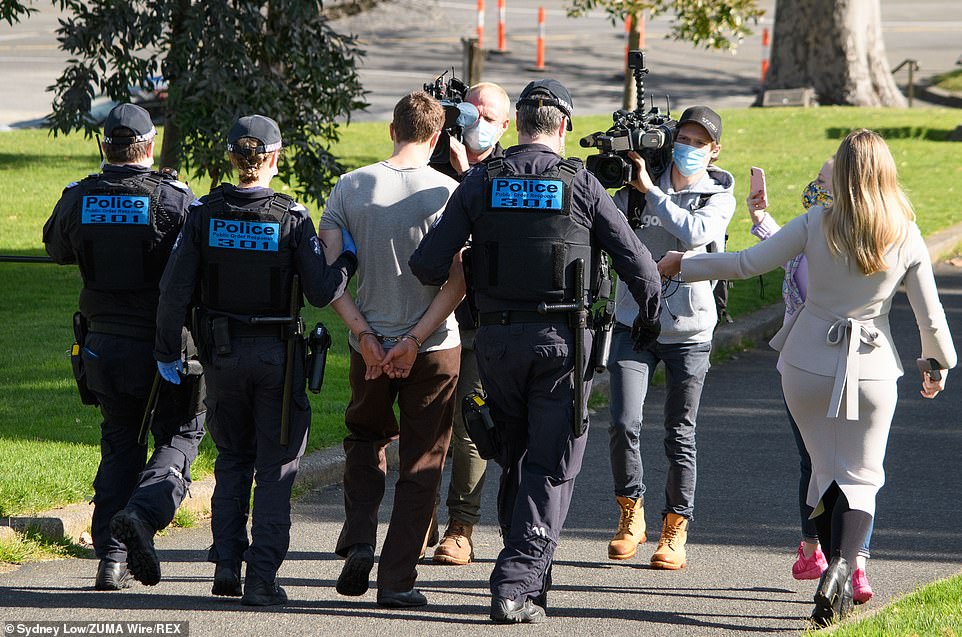 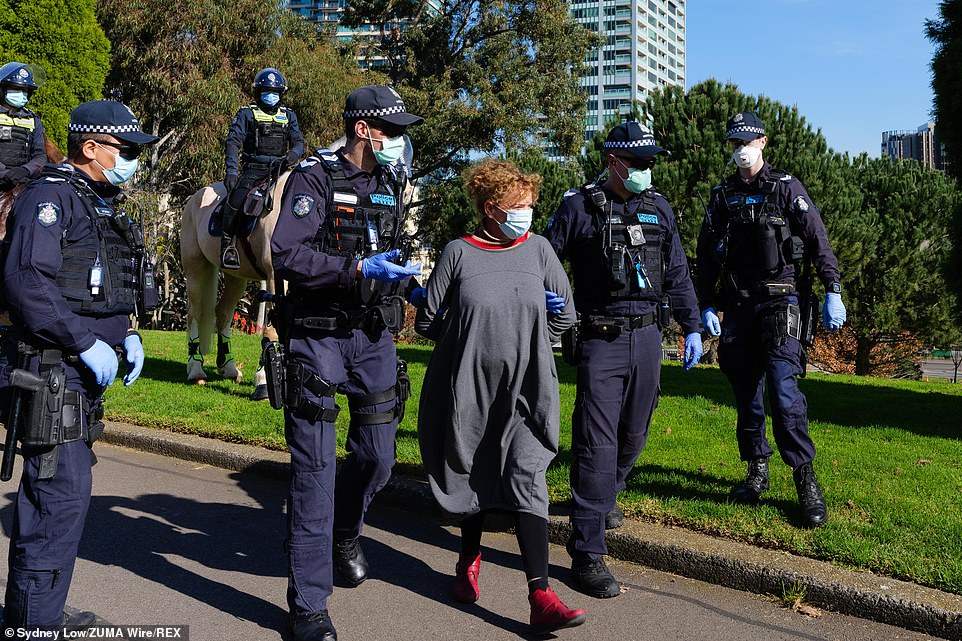