A teenage schoolboy has died after being stabbed in the back of the neck and left for dead in a playing field near Reading, reports claim.

Police have launched a murder investigation into the attack in Emmer Green, Berkshire.

The boy –  who nearby residents claim is just 13 years old – was stabbed in a field backing onto a popular golf course earlier this evening and a police cordon remains in place.

Thames Valley Police have not yet confirmed what happened, but said it was a ‘serious incident’ in a post shared to social media.

Senior detectives, forensic officers and uniformed police were called in after the alarm was raised today.

Neighbors at the police cordon say they were told that the boy had died as a result of his stab wounds.

A teenage schoolboy has died after being stabbed in the back of the neck and left for dead in a field (file image) in Emmer Green, near to Reading, Berkshire

It was not known whether he died at the scene or on his way to hospital.

One local resident said: ‘I know it was a young teen who has been stabbed. I have heard that he has died and that murder squad police are at the scene.

‘I feel so desperately sad for the lad’s parents – what must they be going through – so soon after Christmas and into the New Year?

‘It is a real tragedy. I haven’t heard what sparked the attack but the fact the scene is in a field is quite unusual.’

Police and plain-clothed detectives were carrying out house-to-house inquiries within the police cordon.

Senior officers from the Thames Valley Police Major Crime Team were involved in a briefing to establish early details of what had happened. 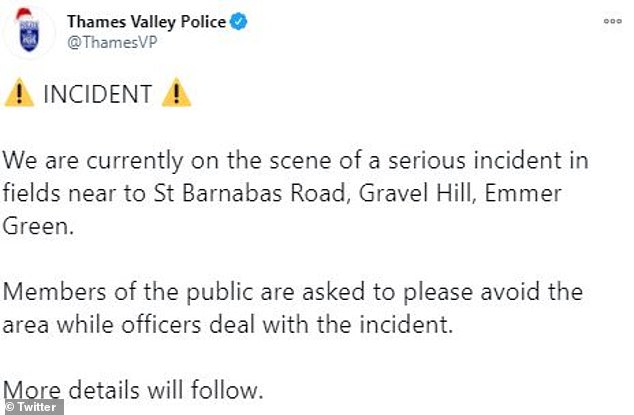 Thames Valley Police (their earlier  tweet, pictured) have not yet revealed what happened in the incident earlier this evening

It is not known if anyone has been arrested in connection with the stabbing.

Emmer Green is an upmarket suburb of Reading and north of the River Thames.

It is a popular commuter village for people working in London as it is within walking distance of the main Reading to Paddinton train lines.

Thames Valley Police said in an earlier statement on Twitter: ‘We are currently on the scene of a serious incident in fields near to St Barnabas Road, Gravel Hill, Emmer Green.

‘Members of the public are asked to please avoid the area while officers deal with the incident.