Parents are split over whether it is safe to send their children back to school, with some fearing that it is too early to do so amid the coronavirus pandemic, a new poll has shown.

Meanwhile, parent groups have warned that mixed messages from the government and public health bodies have caused widespread confusion and anxiety over the reopening of schools.

With just one week before some year groups are set to resume, school authorities are still determining the practicalities of doing so.

Primary schools have been told to reopen year one and year six classes, as well as their early years offerings, by June 1, despite the government’s SAGE (Scientific Advisory Group for Emergencies) group releasing a report saying that the date would be too early.

Some councils, represented by all parties, have said that they cannot guarantee primaries will reopen by this date, according to the BBC.

There were suggestions on Friday that the UK’s largest teaching union, the NEU, may be prepared to negotiate a general re-opening of schools from June 15, and have highlighted SAGE’s findings that two week delay would be safer.

Welsh and Scottish school will wait longer before reopening.

Pictured: An empty playground at Milton St. John’s Primary School which has been forced to close for a risk assessment by Public Health England after a confirmed case of COVID-19 was reported on May 22

Some people fear that chaos surrounding the issue of schools returning could widen the attainment gap between well-off and poor areas and families.

John Jolly, chief executive of the parent group Parentkind told The Observer that parents are asking for certainty, and said there was confusion among parents about the messaging from the government.

Some parents want the peace of mind of knowing schools are safe and reopening, he said, while others ‘want the certainty of keeping children out of school until there is a vaccine, which may reflect families with underlying conditions,’ he said. ‘Then you have other parents that want a clear timeline.’

Jolly added that parents are not convinced about the messaging from the government about schools being safe, and that the evidence the government is basing that claim on is not being communicated fully.

It has also been suggested by teaching unions that families of more vulnerable children are more anxious about sending their children back to school over safety fears.

The former education minister David Laws, who now oversees the Education Policy Institute, said that a worsening of the divide was a ‘significant risk’, according to The Observer.

Joint general secretary of the National Education Union, Mary Bousted, told the newspaper that the the situation on the ground was now ‘chaotic and increasingly untenable’, saying that uncertainty among schools extends to how to convince parents to send their children back, and over how many staff will be available.

With the belief that children are less likely to be affected by coronavirus, professor Russell Viner, president of the Royal College of Paediatrics and Child Health, told BBC Radio 4’s today programme that schools should be allowed to reopen.

‘Covid-19 generally barely affects children and young people and actually we’ve shown that they are about half as susceptible,’ he said on air. ‘There is no doubt in my mind for children themselves, the balances are clearly in favour of going back to school.’

He added that the risks posed to children’s families and the wider community would be manageable with an effective track and trace network, and a phased return. 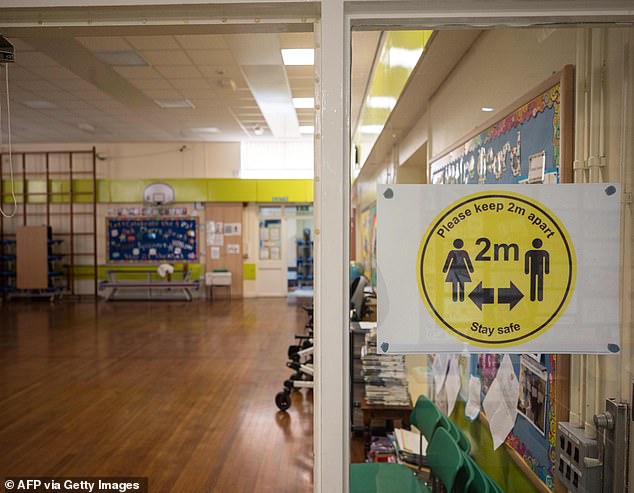 Picrured: Notices advising staff and pupils to maintain 2m of separation to create an environment safe from coronavirus are displayed at Slaithwaite C of E Junior and Infant School in Slaithwaite, near Huddersfield, May 22

According to Mail on Sunday sources, the minister told friends that strong opposition from the unions had forced him to bury his hopes of using the coronavirus crisis as a way to reform school holidays.

The Mail on Sunday understands that Williamson will instead back summer camps for children of all ages that can be used to provide catch-up teaching.

Speaking last week, Williamson said that the Department for Education had been doing ‘an enormous amount of work’ on initiatives to make ‘sure people do not miss out as a result of this crisis, looking at how we can make the interventions to support children’.

‘We are looking at different initiatives that we could maybe look at rolling out during the summer period,’ he added. 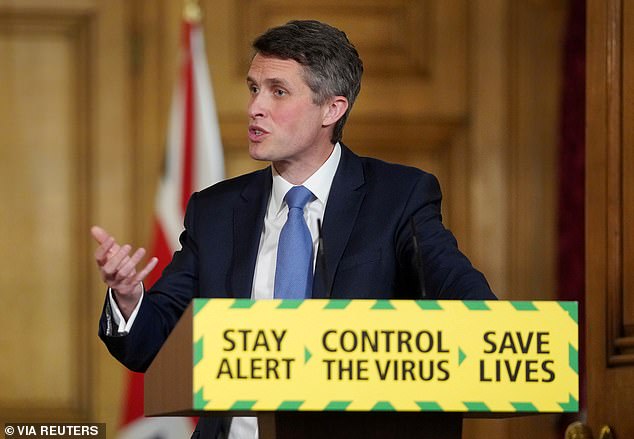 Labour leader Sir Keir Starmer has also urged primary schools to reopen in England as soon as possible as he revealed that his own children have attended lessons throughout lockdown.

The Labour leader said his 11-year-old son and nine-year-old daughter were still going to state school in north London as his wife Victoria is an NHS key worker.

He said he hoped children across England would be able to return to school next month but added that ‘its got to be safe’.

However Starmer said it was important for Prime Minister Boris Johnson and those resisting the reopening, led by the National Education Union, to reach a consensus on how to get pupils back in the classroom.

Students could sit A-level exams in October and GCSEs in November if they are unhappy with their summer results, under proposals published by the Government.

Exact dates have not been released because of the continued uncertainty around the full reopening of schools and colleges, exams regulator Ofqual said.

Following the closure of schools in March, the Department for Education said pupils in England would be awarded calculated grades based on teacher assessment.

Ofqual has now confirmed that grades will be standardised taking account of the expected national outcomes for this year’s students, prior attainment of student cohorts and previous results of the school or college.

The autumn exams would be for students who want to try and improve the grade they receive this summer, and for those who are unable to receive a calculated grade.

A decision on when the exams will take place will be informed by advice from Government, exam boards and groups representing schools, colleges, teachers and students, Ofqual added.

In proposals published on Friday, it said: ‘Given the current uncertainty about when schools and colleges will reopen we are not consulting on the exact dates when the exams should take place.

‘However, for the exams to best serve their intended purpose we envisage that, if possible, AS and A-level exams should take place in October and GCSE exams in November.’