How good is ScoMo? Popularity for the Coalition SURGES as PM enjoys post-election boost following tax cuts and help for drought-stricken farmers

Scott Morrison is squaring for a fight against union thugs as the Government’s popularity surges ahead following the federal election.

The coalition’s primary vote has increased 2.6 per cent since its May victory to 44 per cent, according to the post-election Newspoll published by The Australian.

Mr Morrison has also seen the best results for a prime minister since 2016, with approval ratings shooting beyond 50 per cent for the first time in four years.

The boost in popularity comes as the Government delivers on its tax-cut promise, which saw millions of Australians receive up to $1,080 in relief when they lodged their tax returns this year.

Mr Morrison’s continued support for drought-stricken farmers has also been tipped as a key factor in the surge.

The Government now leads Labor 53 per cent to 47 per cent on a two-party preferred vote.

And with four sitting days left until the long winter break, the Prime Minister wants to pass laws making it easier to kick rogue officials out of the union movement.

He has seized on John Setka’s refusal to step down from the Victorian construction union as apparent proof the crackdown is needed.

This may be enough to clinch crucial Senate crossbench support for his union-busting legislation but Labor claims the industrial relations laws expose the prime minister’s deep-seated ‘hatred’ for unions in general.

The opposition will this week try to launch an inquiry into meetings between Energy Minister Angus Taylor and environmental officials about endangered grasslands. 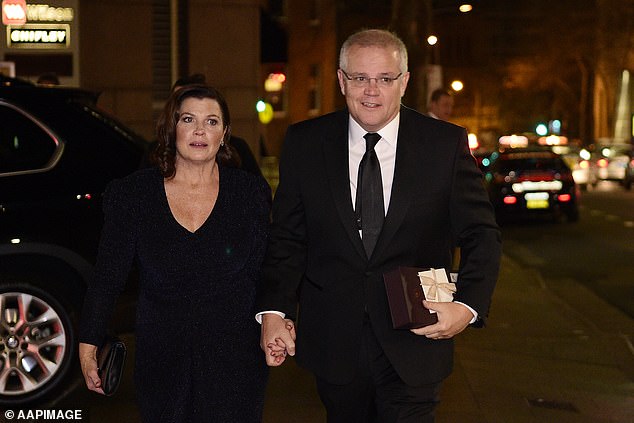 Mr Morrison (pictured with his wife Jenny) has also seen the best results for a prime minister since 2016, with approval ratings shooting beyond 50 per cent for the first time in four years

Labor is pursuing the cabinet minister over his interest in a family company linked to an investigation into alleged illegal land clearing.

But Mr Taylor says his interests have been widely declared and has accused the opposition of waging a ‘grubby smear campaign’.

The government has so far managed to fend off an investigation.

But key crossbench senator Rex Patrick has flipped his position, and is now willing to back an inquiry.

Meanwhile, Mr Morrison heads Labor leader Anthony Albanese as preferred prime minister 48 per cent to 31 per cent, according to Newspoll, while Labor’s primary vote remains largely unchanged at 33 per cent.

The findings come after many pollsters took a hiatus following the May election result which they failed to predict across the board.