Without a care for the customer, this is the moment a delivery driver brazenly slings a fragile parcel from the road all the way up to the recipient’s front porch – and breaks it.

A homeowner in Williamsburg, New York, was gutted when the hardback religious book he had ordered arrived with deep indents in the covers.

But his dismay turned to fury when CCTV revealed the USPS courier had not even bothered to come into his driveway, but instead decided to hurl the package from the sidewalk.

The package did not even reach the door, but bounced back down the steps and on to the snow. 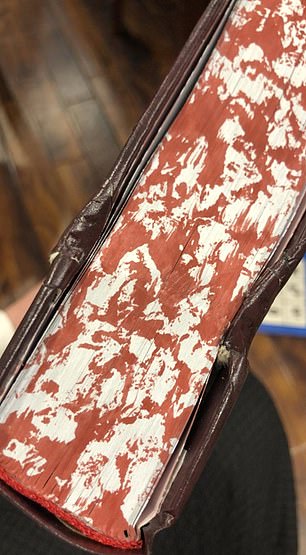 A homeowner in Williamsburg, New York, was gutted when the religious book he had ordered arrived with deep indents in the cover

A second video purports to show the same uncaring deliveryman lobbing a package up the stairs of a second house a few doors down, resulting in the china product getting smashed.

After expressing his severe ‘disappointment’ to see his package treated with such awful care, he shared the video from January 18.

It shows a frosty afternoon on Penn Street which is blanketed in snow, that continues to fall.

The large white USPS van is stopped in the middle of the road and the driver wrapped up against the chill emerges clutching the white package.

He walks a few steps forward on to the sidewalk before launching the rectangular package over the railing towards the door.

He seems to watch as the parcel tumbles back down the steps and nestles in the snow, but does not return to pick it up and trudges back to his van. 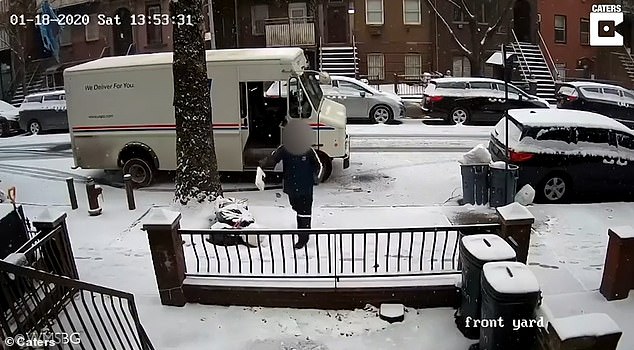 The deliveryman walks a few steps forward on to the sidewalk before launching the rectangular package over the railing towards the door of the Williamsburg, New York, home 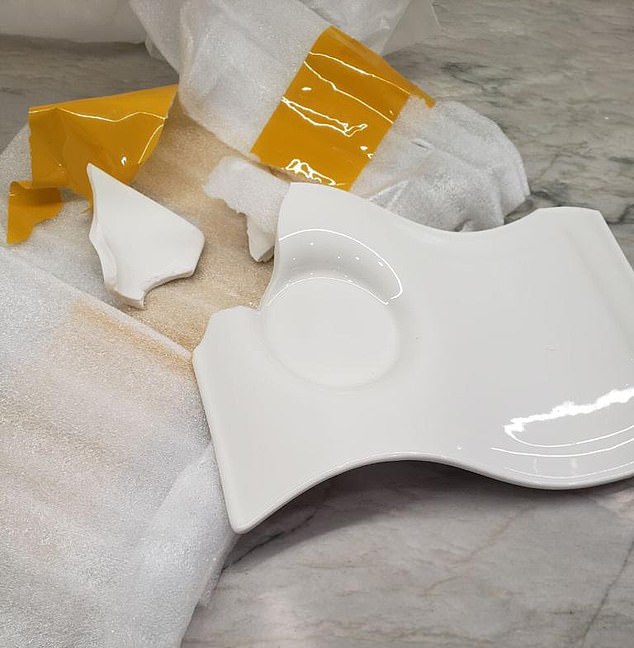 Later that day, another CCTV camera on Penn Street captured a deliveryman, believed to be the same one, marching up to the foot of a home’s front steps.

He throws the parcel up towards the door, but again it does not have enough flight and smacks the top step and rolls back down.

The deliveryman tries again with a more forceful throw, and this time the package slams against the front door before coming to rest.

USPS have been reached for comment but have not yet responded.

The shocking treatment of the parcels came after a damning investigation into the Brooklyn neighborhood’s postal service.