Look away Boris! Postcode checker shows which pubs and restaurants are offering up to £10 off meals in August under Rishi Sunak’s new scheme – and it doesn’t look like it will help much with the government’s anti-obesity drive!

A newly-released postcode checker shows which pubs and restaurants are offering up to £10 off meals in August under Rishi Sunak’s new scheme.

Diners will receive a 50 per cent discount, up to a maximum of £10 per head, on Mondays, Tuesdays and Wednesdays in the month of August under the ‘Eat Out to Help Out’ programme.

The diner discount, which will only apply to participating business, was announced earlier in the month by the chancellor to boost spending on Britain’s ailing High Streets.

It is set to launch next week just days after the government launched an new anti-obesity strategy, spelling the end of confectionery displays at store checkouts and deals such as ‘buy one get one free’ on unhealthy foods’.

Yesterday, experts warned the Chancellor’s 50% discount which applies to fast food restaurants such as KFC and McDonald’s risks undermining the health initiative.

To use the postcode checker which reveals participating restaurants within two miles of where you live visit this website. 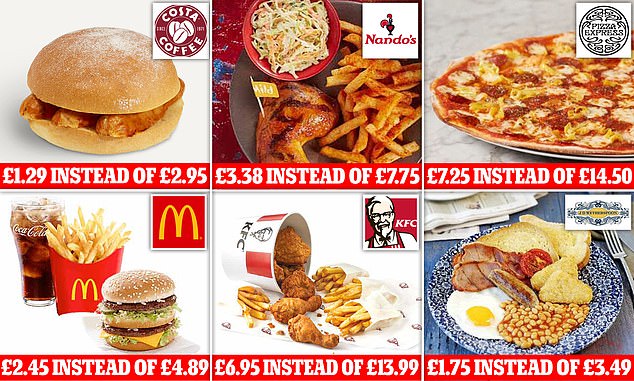 What deals at popular chains can you get?

Wetherspoon: Traditional breakfast £1.75 instead of £3.49

Amelia Lake, a professor in public health nutrition at Teesside University told The Guardian: ‘Offering subsidies on food which is particularly associated with being less healthy completely contradicts the other message around reducing obesity” she said.

‘On one hand we are hearing that tackling obesity is an urgent public health challenge, but on the other we are seeing actions that we know do not help us reduce obesity. There needs to be clear messaging and joined up action.’

As well as fast food chains, the cut price meals will be available at a number of popular restaurants such as Nando’s and Pizza Hut, along with thousands of independent eateries.

The discount applies to meals where you sit in the restaurant and includes everything available on the menu, barring alcoholic drinks. The hefty price reduction will then be applied when you get your bill.

With the Eat Out to Help Out deal, businesses will claim the money back from the Treasury, which is expected to spend £500million on the scheme.

The government has already published 59 chains that are taking part in the scheme, including Five Guys, Wetherspoons, Pizza Express and Wasabi.

They have also launched a postcode checker that lets you search for participating restaurants within two miles of where you live.

A number of chains have already passed on the saving’s from Mr Sunak cutting VAT from 20 per cent to 5 per cent, so prices are set to be considerably cheaper for consumers combined with the new scheme.

The new scheme will allow consumers to make huge savings a popular restaurants located all over the country.

Customers hoping to sit-in and order a cheeky Nando’s will be able to get a quarter Peri Peri chicken and two sides for £3.38 instead of the usual £7.75.

This is more than a half-price discount as the coffee-chain is adding the VAT cut to items making them even cheaper.

Pub-chain Wetherspoon was quick to release a new cheaper menu on July 15 when the VAT cuts kicked in, and the new scheme means you can get the popular traditional breakfast for £1.75.

Fans of Italian eatery Pizza Express can get an America Hot pizza for half-price at £7.25.

And fans of fried chicken can get hold of a six-piece bargain bucket for £6.95 instead of the usual £13.99.

And a medium Big Mac meal with fries and a drink will cost you £2.45

The discounts are only available if you sit-in and eat. They are not available for drive-thrus and takeaways.

The idea behind the policy launched chancellor is that people sit in and spend money on the High Street.

“To encourage people to safely return to eating out at restaurants, the Government’s new eat out to help out discount scheme will provide a 50% reduction for sit-down meals from Monday to Wednesday every week throughout August 2020,’ he said.

Eat Out to Help Out: How the scheme works and the best way to use ‘stacking’ with other discounts to increase your saving

On Mondays, Tuesdays and Wednesdays in the month of August, Britons can eat out for a discount price.

At businesses participating in the scheme, diners will receive a 50 per cent discount, up to a maximum of £10 per head.

Businesses will claim the money back from the Treasury, which is expected to spend £500million on the scheme.

Restaurants and pubs are expected to announce their involvement over the coming weeks.

The discount covers non-alcoholic drinks, but not booze.

Can you use OTHER discounts too?

Yes – you can ‘stack’ the discount on top of other offers to earn yourself increased savings.

The Government stipulates that outlets that sign up to the scheme must apply the 50% discount across the whole menu AND on top of any meal deals or vouchers on offer that day.

That means the only way a particpating restaurant can avoid a double saving for diners is to axe their own discounts.

Chains including Wetherspoon and Pizza Express have all said they have no plans to change their existing offers.

Discount schemes such as the Tastecard will run throughout August too. Money Saving Expert says this should mean you can stack the usual dicount that comes with the car with the 50% off offer.