The price of chips, crisps and other potato products is set to soar due to scorching temperatures in recent months that have damaged crops.

Frozen chip maker McCain is understood to be hiking the price paid by supermarkets as much as 20 per cent as farmers struggle with major potato shortages following a two-month heatwave.

The price of chips, crisps and other potato products is set to soar due to scorching temperatures in recent months that have damaged crops

McCain, which also makes frozen jacket potatoes, roast potatoes and wedges, is said to be lifting prices as soon as Saturday, according to magazine Fresh Produce Journal.

The potato shortage has already prompted major supermarkets to take action, with Tesco more willing to stock its shelves with potatoes that have rough, scabby patches and Morrisons promoting a range of ‘wonky’ fruit and vegetables.

‘Personally, I think the price rise from McCain is two months premature since volumes won’t be significantly affected until November,’ a source told Fresh Produce Journal.

‘But I can understand why they’re doing it now because news stories about drought-related vegetable shortages are in the public eye at the moment.

‘Customers may be less understanding in the autumn once the weather has changed.’

Thomas Brereton, retail analyst at Globaldata, said wetter weather in recent weeks and in September could improve the situation for potato producers.

But Brereton argued that the shortage may not be such a bad thing, with more consumers opting for products such as brown rice and other grains.

According to The Grocer magazine potato sales have fallen by 5.4 per cent over the past four years, while shoppers swap chips and mash for rice and noodles where sales have jumped 30 per cent. 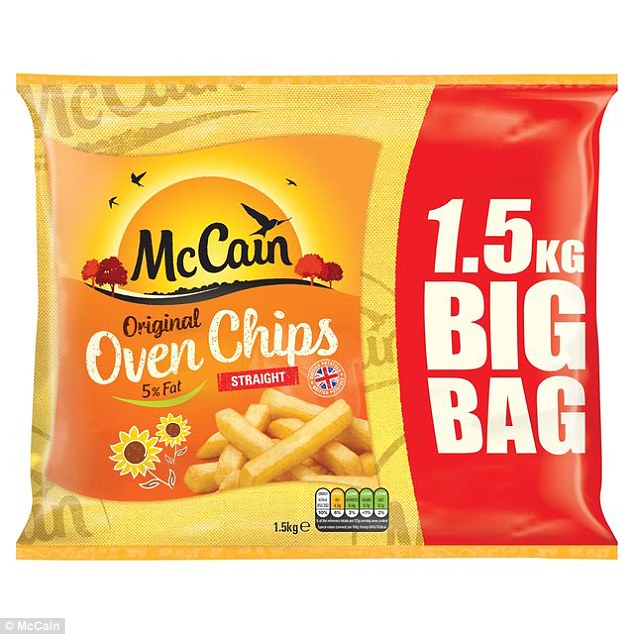 Mr Brereton said: ‘While potato production is falling, so is the British appetite for them.

‘In the eyes of many, potatoes are overly starchy and take time to work into a meal, which limits their appeal to younger shoppers.

‘This has coincided with the rising popularity of interchangeable products such as brown rice.’

Potato planting is expected to fall by around 3 per cent this year compared to 2017, the third lowest on record, according to the Agriculture and Horticulture Development Board.

A McCain spokesman said: ‘As part of our regular conversations with wholesale customers we’re discussing the potential impact of this year’s exceptional weather, which has affected all agricultural crops and food producers.

A spokesman for Walkers said: ‘We have plans in place with suppliers and customers to make sure we’re covered for the shortfall in the harvest and are confident that we have enough potatoes to keep supplying our crisps.’