Presidents Cup: Ian Poulter aims dig at Justin Thomas for having to play a three-foot putt

‘If it’s that short just tap it in’: Ian Poulter aims dig at furious Justin Thomas for having to play a three-foot putt in tight matchup at the Presidents Cup, pointing out American rival ‘made us tap in a few’

Ian Poulter has taken a swipe at American rival Justin Thomas after he seemed put out by having to play a three-foot putt at the Presidents Cup.

Thomas was irked by International Team player Si Woo Kim deciding not to concede a putt.

The American reluctantly tapped the ball in but looked visibly annoyed as he walked away from the green, shaking his head and muttering words under his breath.

Poulter, who was not competing at the event and watched on following his defection from the PGA to LIV Tour, commented on Thomas’s furious reaction, telling him to get on with it.

He wrote on Twitter: ‘If it’s that short just Tap it in…… He’s made us tap in a few,’ following by a shrug emoji.

Kim was the top points-earner by going 3-1, and went on to beat Thomas in singles on Sunday. 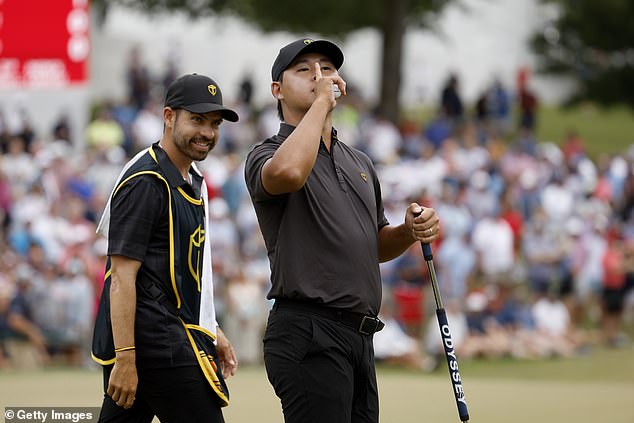 Twelve holes were won between Thomas and Kim in the lead match and it all came down to a pair of 10-foot birdie putts on the 18th with the International Team player sinking his.

Kim also angered Thomas with his celebration on the 15th hole as he put his finger to his lips to shush his rival and pumped the air in jubilation.

The American was already heading to the next tee but he appeared annoyed as he caught glimpses of the celebrations.

‘Honestly, at the time, I was pretty pissed off,’ Thomas told Golf Channel.

‘I think when you’re in the moment, when you’re on the other side of it, it’s something that gets you motivated, gets you pumped up a little bit.’

Despite a frustrating day on a personal level, Thomas was part of the USA team that overcame its international counterparts to claim its ninth straight Presidents Cup. 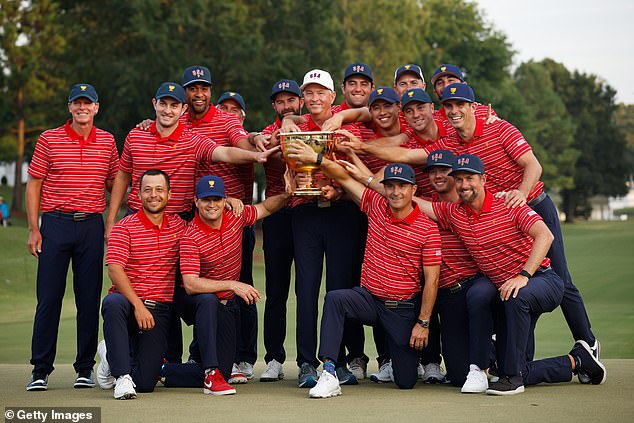 Thomas, who has remained with the PGA Tour, has been vocal in discussing the Saudi-backed breakaway league LIV, saying rebels only had themselves to blame last week.

While Poulter did not hold back in his criticism of the Swedish Golf Federation for axing his fellow LIV Golf player Henrik Stenson.

Taking to Twitter, Poulter said: ‘Beyond disappointing to hear this news.

‘I actually hope the Juniors/Disability golfers have their say. I hope you regret this SGF.