Prince Harry and Barack Obama have become fast friends, and he was one of the many high-profile guests at the former U.S. president’s first Obama Foundation Summit on Tuesday.

The 33-year-old British royal, who is scheduled to appear on stage this evening, was photographed sitting in the audience at the two-day event held at the Marriott Marquis McCormick Place in Chicago, Illinois.

Prince Harry sat one row behind Obama and his wife, former First Lady Michelle Obama, who were all smiles as they took the stage at the global summit aiming to cultivate a new generation of leaders. 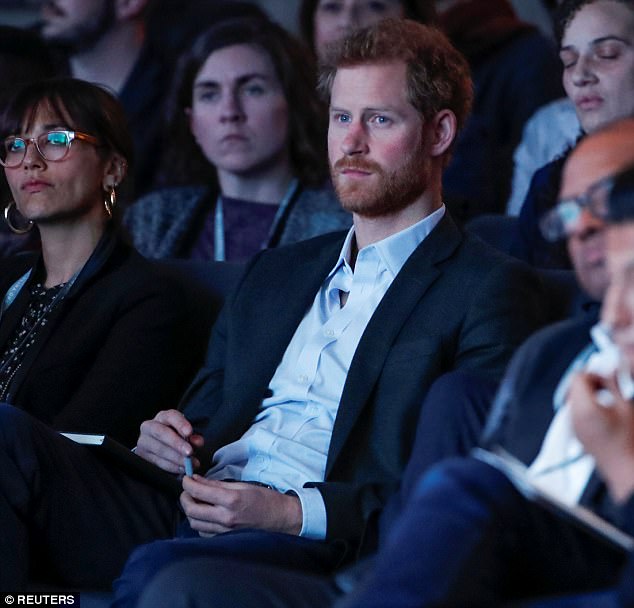 Prince Harry, who is scheduled to speak at the summit on Tuesday evening, was photographed sitting in the audience 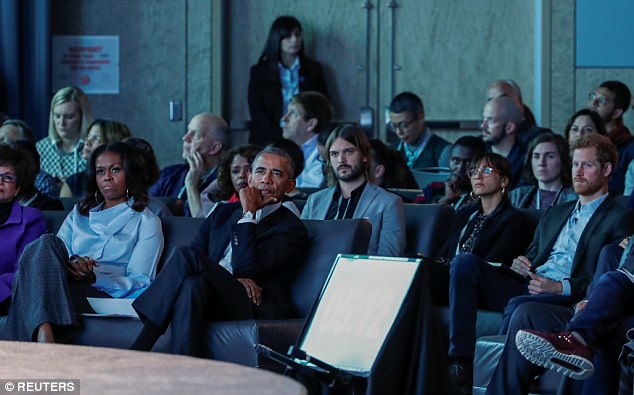 The British royal sat one row behind the Obamas, and all three of them were listening intently during the event

‘Our goal is not to present some fixed theory of how change happens,’ Obama said during the opening session.

‘Our goal in this session is not to pump you with a whole bunch of power points, data and information or a blue print for how you can go back and do what you’re doing even better. In many ways, we want to learn from you,’ he continued.

‘In other words, this is a big brainstorming session, it’s a big hackathon,’ he said.

Obama looked dapper in a suit and a button-down shirt, which he wore sans tie, while Michelle was as stylish as ever in a cowl-neck blouse and plaid dress pants.

When the they weren’t on stage, the Obamas were seen sitting in the audience, leaving some space between them to hold their papers.

Prince Harry also opted for a business casual look, sporting a blazer, trousers, and a button-down shirt that he left open at the collar. 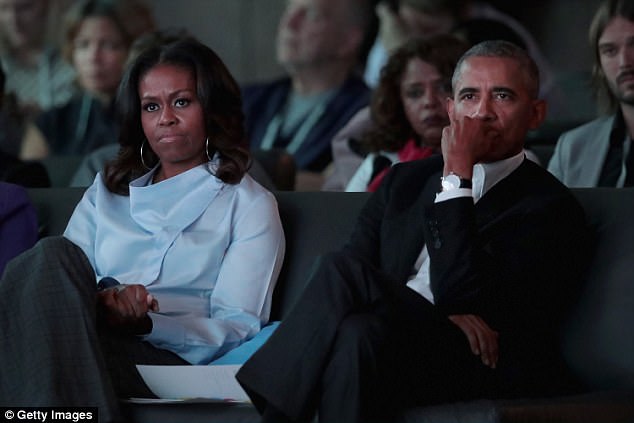 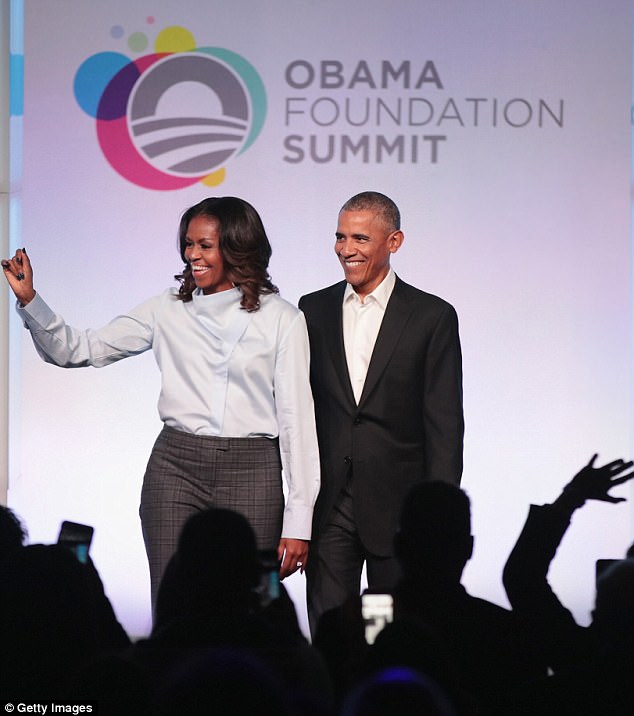 Obama looked dapper in a suit and a button-down shirt, which he wore sans tie 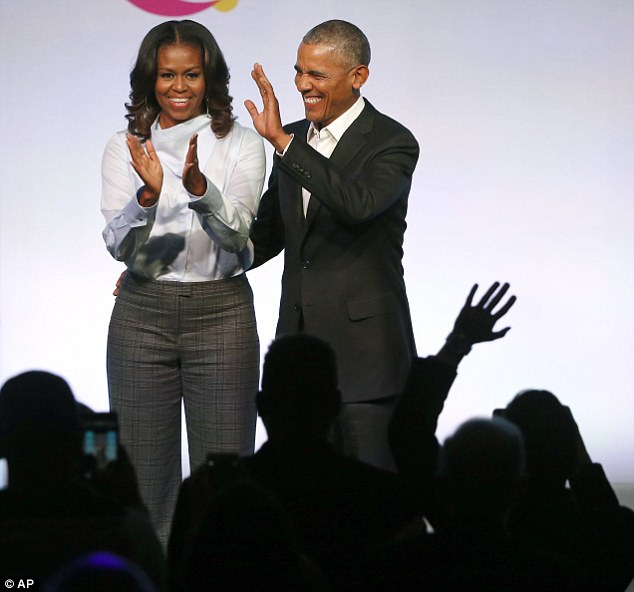 He appeared to be fiddling with a pen that he was holding in his hands while he kept his eyes locked on the state in front of him.

Prince Harry will be joining join Mellody Hobson, the president of Ariel Investments and chair of After School Matters, on stage to hold a conversation about the ‘ways that youth can be the drivers of community engagement and development.’

He will address the roughly 500 young civic leaders and community activists chosen from 20,000 applicants from around the world, for what the Obama Foundation promises will be intensive workshops and opportunities to share ideas.

Although she didn’t appear to be in attendance, Prince Harry’s girlfriend Meghan Markle is a 2003 graduate of Northwestern University, which is near Chicago. 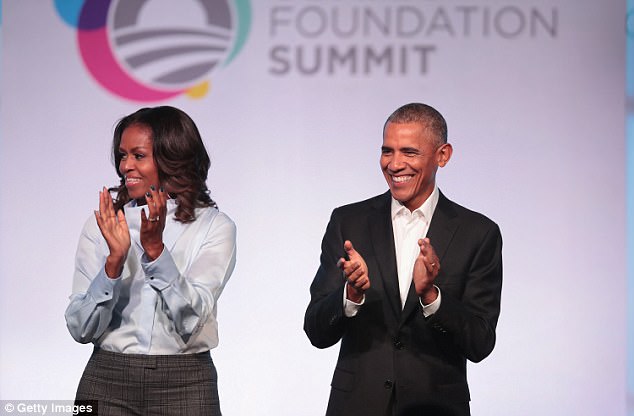 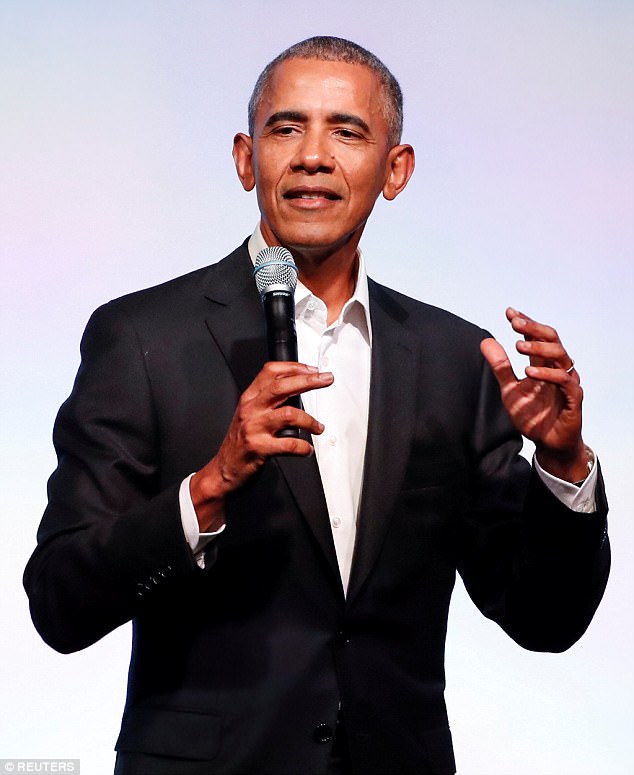 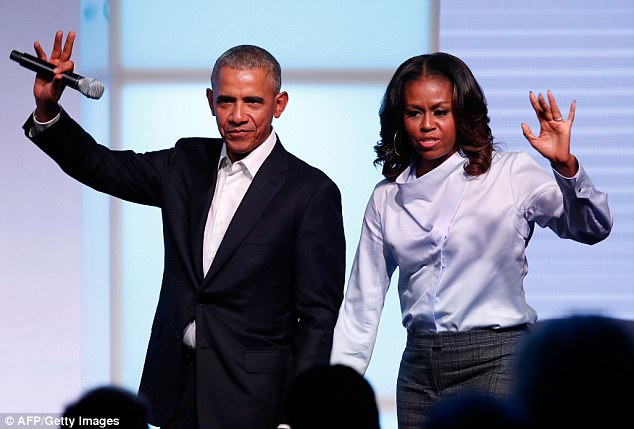 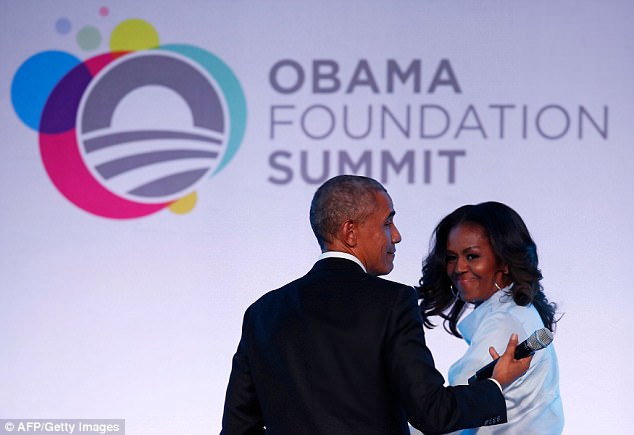 Among the attendees highlighted by the foundation was Trisha Shetty of India, who started the organization SheSays to combat sexual abuse against women.

Other notable speakers include Matteo Renzi, the former Italian prime minister, and Hamdi Ulukaya, founder of the Chobani yogurt brand.

Chance the Rapper, a socially active hip-hop artist who was born and raised in Chicago, has helped organize the concert finale.

‘I want to help inspire and empower young people to change their world,’ the artist said in an email released by the foundation.

Chance the Rapper and Gloria Estefan will perform in a public concert to cap the event.