The CEO of Prince Harry’s Invictus Games Foundation has revealed the Düsseldorf contest has been postponed to give competitors ‘time to prepare’ after the coronavirus pandemic.

In March, organisers said the competition founded by Prince Harry – due to take place at The Hague this year – was likely to be rescheduled to May or June 2021 because of the global crisis.

And in a statement released on Twitter this week, they said the Invictus Games Düsseldorf competition, which was due to take place in 2022, has now also been pushed back by a year.

The Invictus Games, founded by Prince Harry, 35, has delayed the Düsseldorf contest till 2023 amid the coronavirus pandemic (pictured, the Duke and Duchess of Sussex at the Sydney Games in 2018) 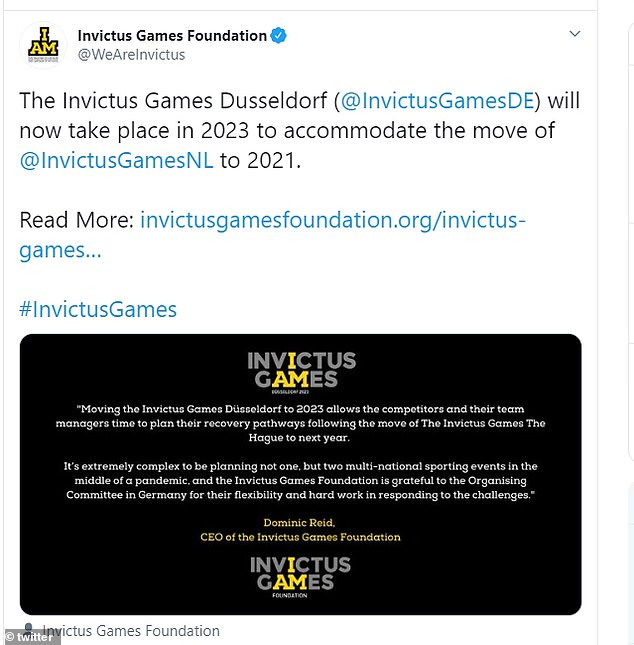 Prince Harry’s Invictus Games Foundation announced the news on social media, with the CEO calling it ‘extremely complex’ to plan ‘two multi-national sporting events in the middle of a pandemic’

A statement released online read: ‘In close coordination with the Invictus Games Foundation, the German Organising Committee have decided to reschedule the event due to the ongoing coronavirus pandemic, to accommodate the rescheduled Invictus Games The Hague which will now take place in 2021.

‘It will thus be possible to maintain the two-year Invictus Games cycle and give the competitors and their friends and families the time they need for practice and preparation between the two events.’

Meanwhile, Dominic said that moving the contest ‘allows the competitors and their team managers time to plan their recovery pathways following the move of The Invictus Games The Hague to next year.’

The move to delay the competition comes weeks after the Duke  said the ‘Invictus spirit’ was ‘even more relevant’ amid the Covid-19 pandemic as ‘we address new challenges and adapt our lives’ during a webinar with organisers. 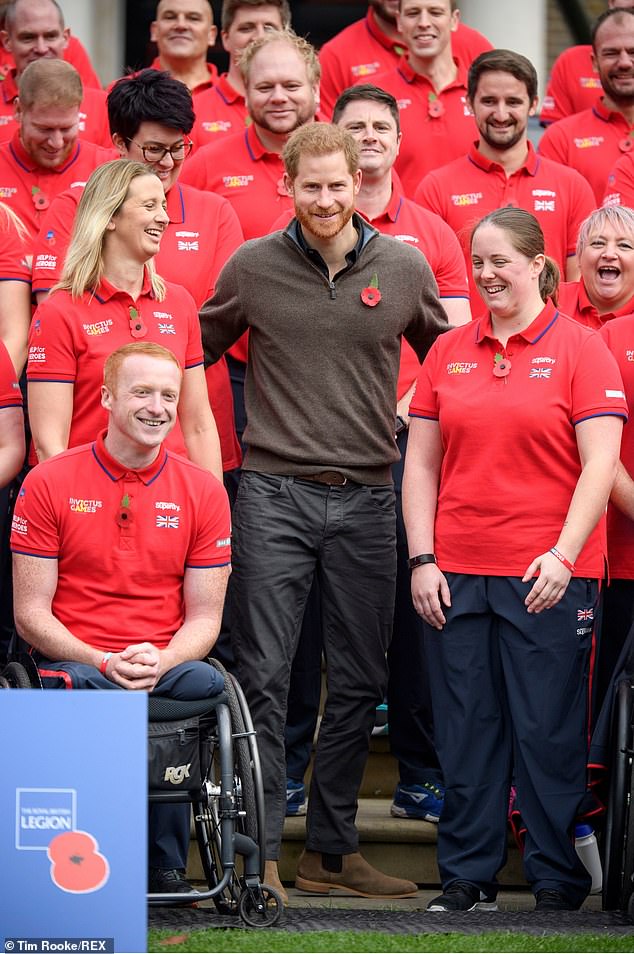 The Duke of Sussex announced the Düsseldorf  2022 contest in January this year, shortly after selecting the British team for the 2020 contest in the Hague

Prince Harry shared a message with Invictus Games organisers for the meeting, with a video clip released on the charity’s YouTube page.

The royal, who is currently isolating in Tyler Perry’s $18 million mansion in Los Angeles having stepped back from royal duty, told organisers: ‘This conversation is all about sharing the Invictus spirit and it is even more relevant now as we are having to address new challenges and adapt our lives.’

The video clip was released days after it was revealed that Prince Harry has merged The Endeavour Fund and the Invictus Games so that he could continue working on them following his decision to step back as a senior royal.

At the start of the virtual meeting, which took place in May, Prince Harry told those attending: ‘Hello everybody, I’m really happy to be able to welcome you all here today for the first ever Invictus Games foundation conversation. 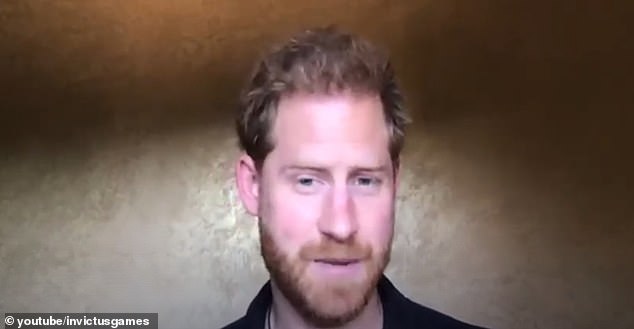 Last month, Prince Harry said he believes the ‘Invictus spirit’ is ‘more relevant’ than ever in a YouTube video for the organisation

‘We’re obviously not in the Hague but I’m so pleased we have been able to organise this virtual gathering when the Games would have taken place themselves.’

He went on: ‘This conversation is all about sharing the Invictus spirit and it is even more relevant now as we are having to address new challenges and adapt our lives.’

‘I hope that all the nations, competitors and family and friends are coping well to support each other during this time and I know you’ll be showing that resilience that is so central to the Invictus community,’

He added: ‘I’m very grateful to all of you for being here and showing your support, specifically the speakers and panelists for sharing their experiences.’ 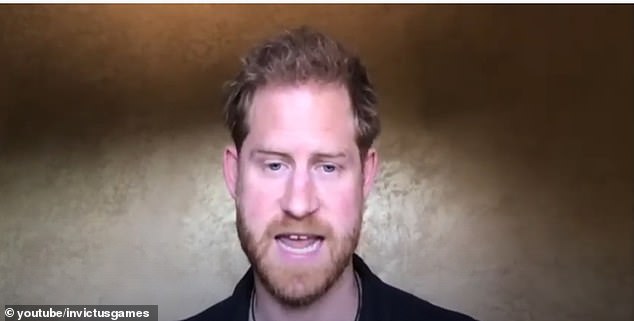 ‘I hope this conversation will be the first of many, and I am really looking forward to a time when we can come together again. Thank you very much.’

Harry was inspired to found the global tournament after attending the Warrior Games in Colorado in 2013.

At the event he saw how injured American military personnel thrived on the challenge of taking part in competitive sports that aided their recovery. 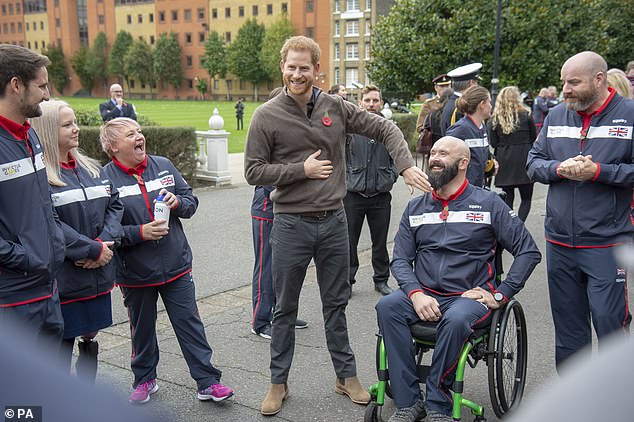 Last year, the Duke met with team members for the Hague 2020 contest, which has since been postponed to 2021

It emerged last month that the organisation had merged with the Endeavour Fund.

‘The Endeavour Fund will continue to support the ambitions of wounded, injured and sick service personnel and veterans but will now expand its activities across the international Invictus community.’ 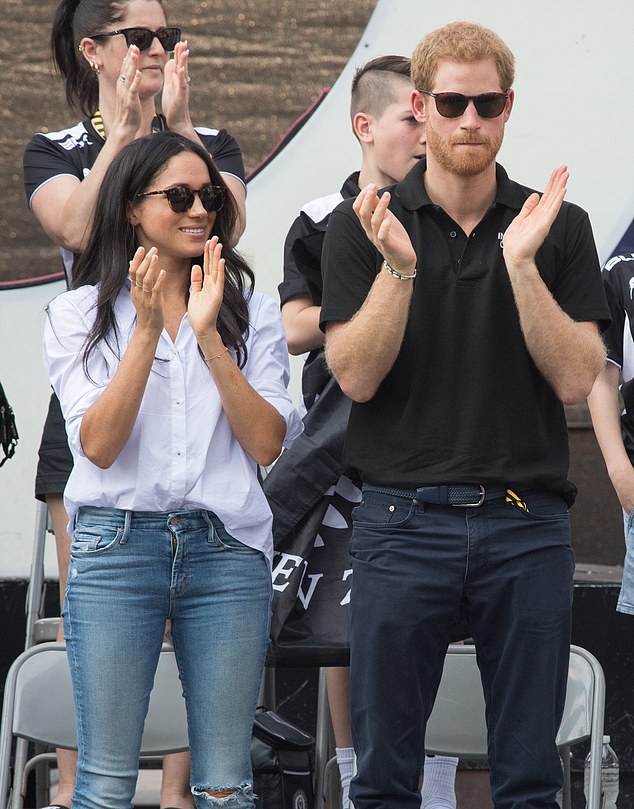 The royal founded the organisation in 2014 and it has remained close to his heart ever since, choosing the 2017 event as his first public appearance with Meghan

The Duke of Sussex established The Endeavour Fund in 2012 when he was patron of The Royal Foundation – alongside brother Prince William and Kate Middleton.

Last year, Prince Harry and Meghan Markle announced they were splitting from The Royal Foundation as the two couples started to take ‘divergent paths’ in their charity work and needed to reflect that in different outlets, a source told PEOPLE.

Following Megxit, it was decided that Prince Harry will no longer use HRH or his honorary military titles.