Kate and William enjoyed a night behind the bar as they pulled pints at Belfast’s Empire Music Hall, but there appeared to be no sore heads today as they headed out for a busy day of engagements on their seconds day in Ireland.

The Duchess of Cambridge opted for a very apt royal blue ensemble as she joined William to meet police officers and staff at Hillsborough Castle where they discussed the challenging roles they undertake.

The mother-of-three could be seen wearing her beloved sapphire earrings, which were originally gifted to her late mother-in-law as a wedding gift as part of a suite of jewels given by Crown Prince Fahd of Saudi Arabia, before William passed them on to Kate following their engagement in 2010.

Kate, 37, showcased a bouncy blow dry for her engagement today as she chatted animatedly with the police staff today. 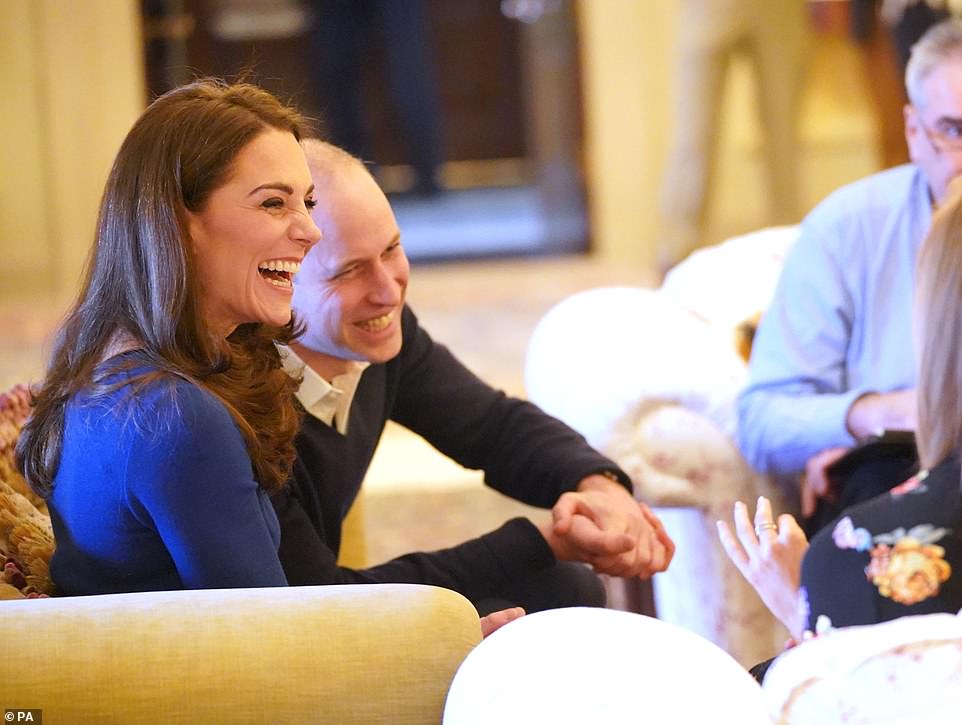 William meanwhile, opted for his signature daytime look of an open collared shirt, chinos and a navy pull-over.

Following their meeting with the police force this morning Kate and William moved on to the Braid Arts Centre to visit the charity Cinemagic, who have used film, television and digital technologies to engage with over 500,000 young people.

The charity uses visual arts to increase opportunities and develop skills for young people from all backgrounds. The Duke and Duchess will take part in some of Cinemagic’s workshops to see the full range of training they provide.

Their final engagement of the day will be at Sure Start, a programme that supports parents with children aged under four years old living in disadvantaged areas in Northern Ireland.

Their Royal Highnesses will see some of the different programmes that Sure Start provides to understand how the organisation supports parents and provides best practice for early years work. 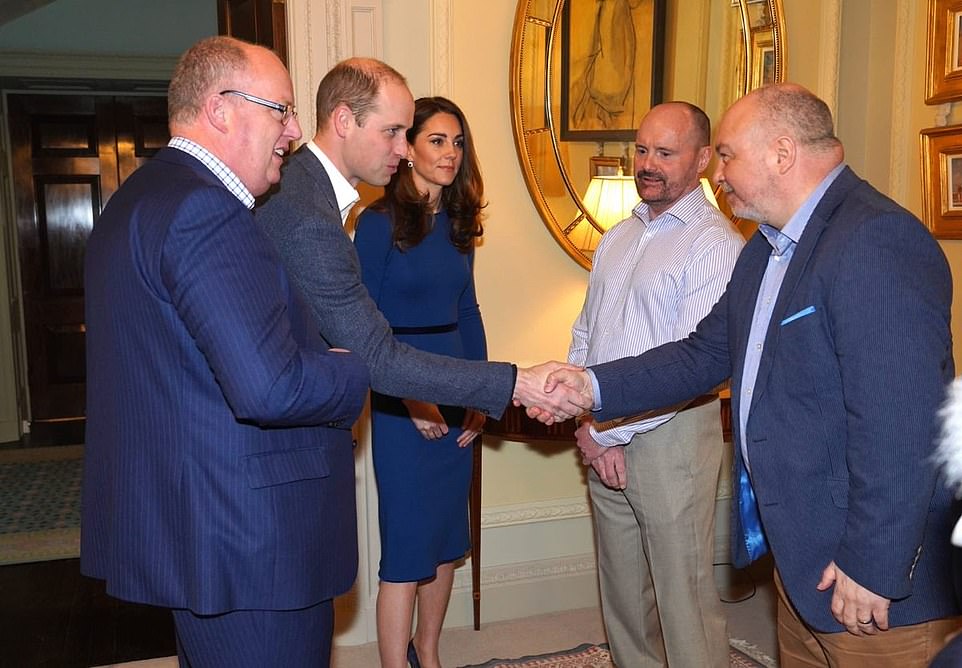 It is the couple’s second day in Ireland, with the pair preparing for a busy day of engagements beginning by spending time with the officers at Hillsborough Castle 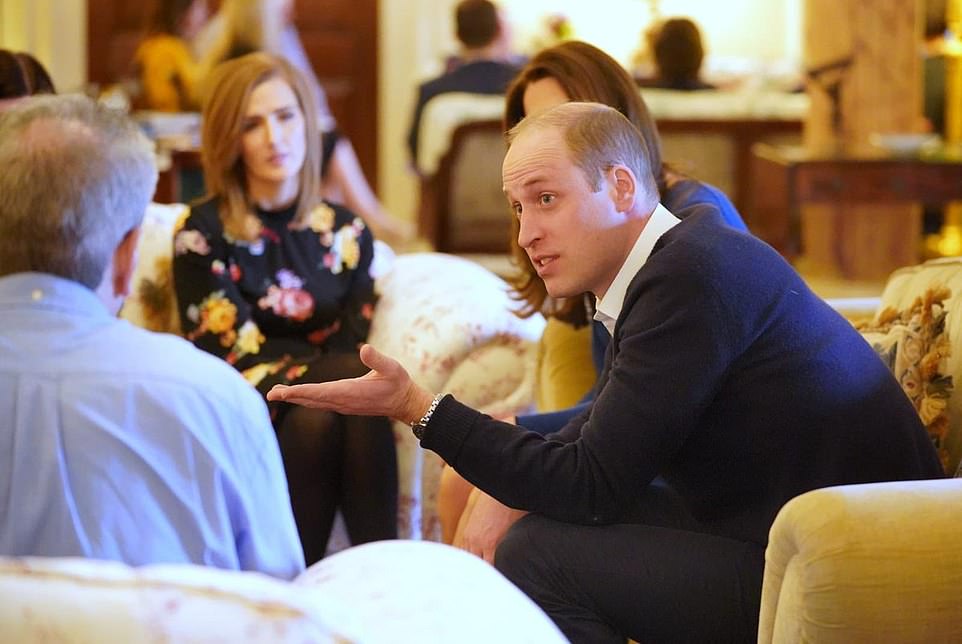 William meanwhile, opted for his signature daytime look of an open collared shirt, chinos and a navy pull-over

Kate, 37, could be seen laughing as she went behind the bar and poured pints with her husband at the party.

The mother-of-three stunned in a £1,590 Missoni metallic-knit wrap dress, which she paired with her signature Gianvito suede stilettos, costing £505, and a nude Mulberry clutch.

There were cheers as Kate poured a pint of Harp Ice lager and set her effort on the bar.

William then took his turn, saying ‘here we go’ as he tilted the pint glass. He watched the tap intently before exclaiming ‘look at that bad boy’ as he admired his work, and added: ‘Perfect… good enough for an advert.’

The couple, who arrived yesterday for a surprise two-day tour of Northern Ireland, were greeted by well-wishers and Lord Lieutenant of Belfast Fionnuala Jay-O’Boyl before making their way inside. 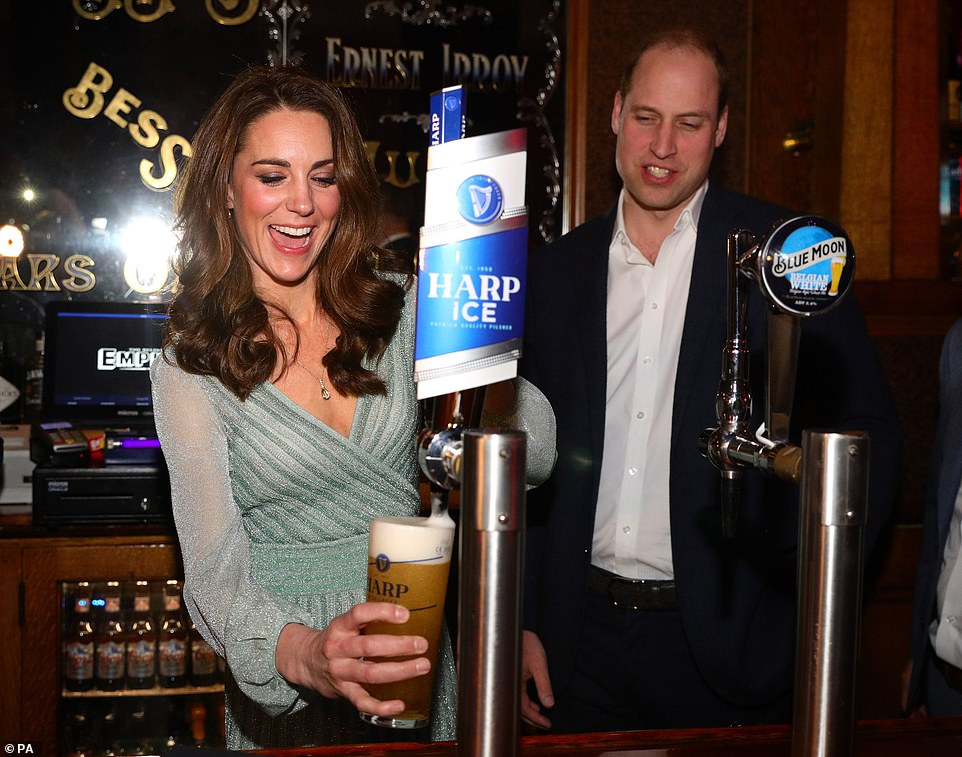 The Duchess of Cambridge tried her hand at pulling pints as she joined Prince William at Belfast’s Empire Music Hall last night. Kate, 37, could be seen laughing as she went behind the bar and poured pints with her husband at the party 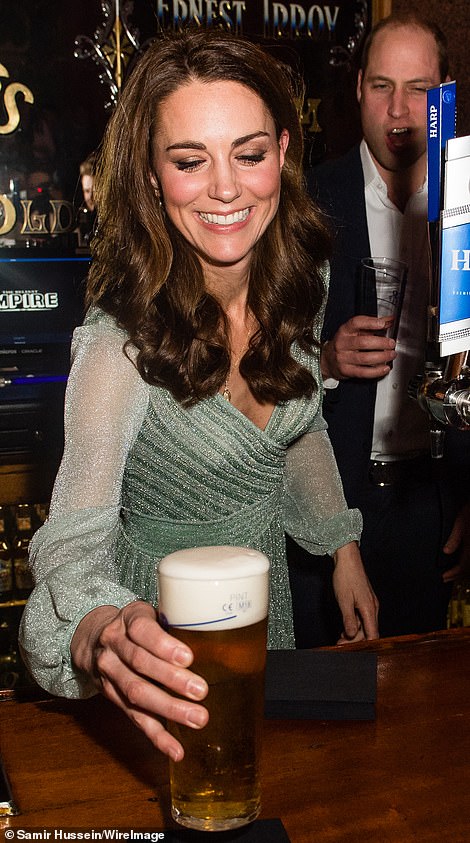 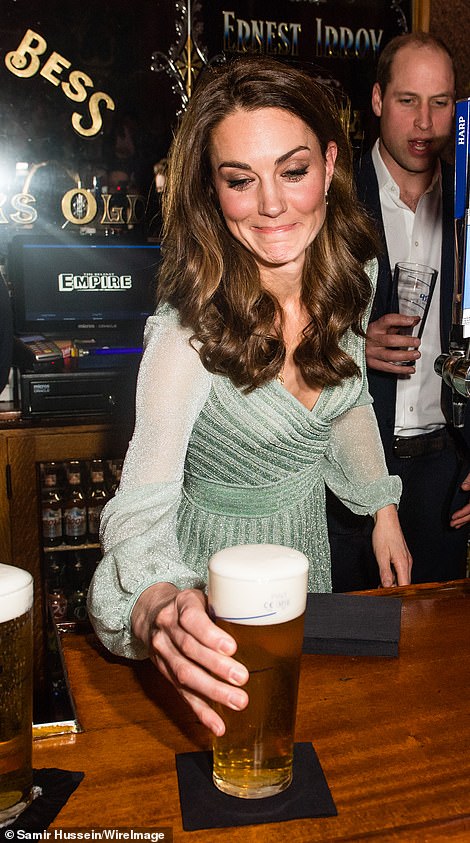 The appearance at Empire Music Hall wrapped up an action-packed day of activities.

A smile was never far from the Duchess of Cambridge’s face as she showed off her footballing skills, tried her hand at archery, practised putting up a tent and took on her husband in a heated Canadian canoe race.

The couple appeared in excellent spirits as they arrived at their first stop of Belfast’s Windsor Park stadium, where they jostled on the pitch as they joined excited schoolchildren for a spirited kickabout.

Kate, 37, started the day in a £1,200 Carolina Herrera coat and £199 LK Bennett boots, but soon swapped them for a £159 navy Barbour jacket and £80 New Balance trainers which proved a more practical choice. Keen football fan William, 36, also came prepared with a second pair of shoes and spent much of the afternoon in Nike trainers.

After the kickabout, the couple headed some two hours west of Belfast to the Roscor Youth Village on the shores of Lough Erne, Co Fermanagh, where they met youngsters who benefit from the outdoor adventure camp. Kate was given a canoe lesson, while the Duke of Cambridge tested his balance on a low-ropes assault course. 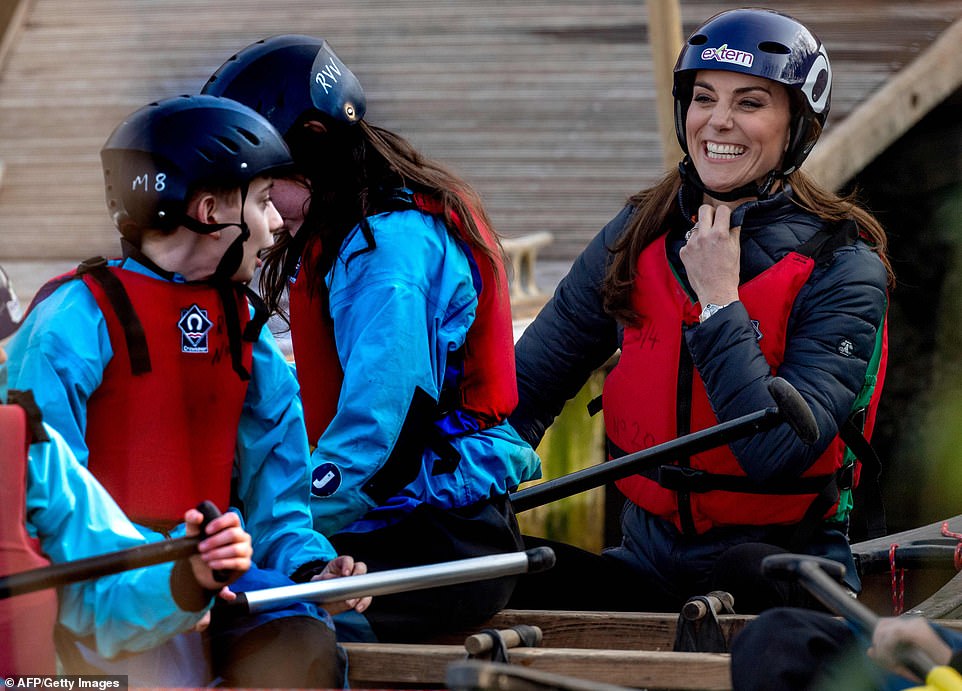 Sporty Kate was in her element as she and William kicked off a surprise two-day tour of Northern Ireland with an action-packed day of activities. The Duchess of Cambridge looked perfectly at ease as she took part in a canoeing lesson, pictured 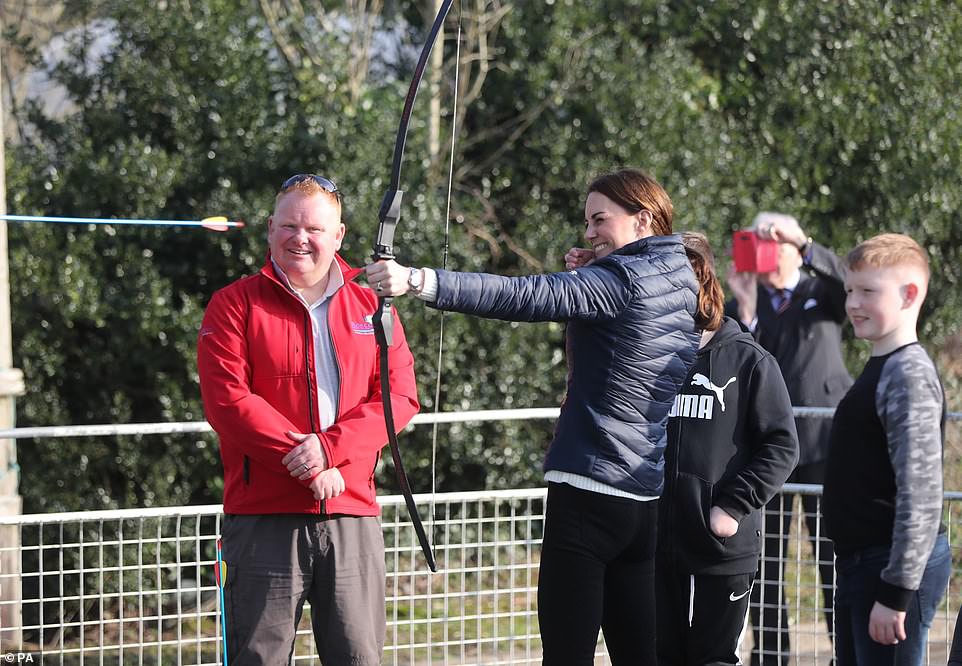 Ever the sportswoman, the Duchess of Cambridge also put herself forward for an archery session a the youth village