Protoceratops dinosaurs used their large skull frills to flirt with potential mates – and not as defence as previously thought, a new study reveals.

Researchers at London’s Natural History Museum say they’ve studied the largest complete set of 3D data ever for any single type of dinosaur.

The team analysed 3D scans of Protoceratops skulls to find out more regarding the evolution of the creature’s elaborate neck frills.

About the size of a large sheep, Protoceratops was a fairly common species that would have lived in what is now Mongolia’s Gobi Desert, somewhere between 74 million and 70 million years ago.

Protoceratops is a member of the Ceratopsian group of beaked herbivorous dinosaurs, which includes the more famous and much larger three-horned Triceratops.

The experts concluded that Protoceratops developed the frills as a result of sexual selection – when certain traits in animals are favoured by members of the opposite sex, and so in time can become more elaborate.

Pictured, artists’s impression of a Protoceratops – which was a predecessor of the more familiar horned dinosaurs such as Triceratops

Today, we can see the results of sexual selection in the extraordinary feathers of the birds of paradise and the elaborate enlarged mandibles of the stag beetle.

Researchers had wanted to see if sexual selection could explain the evolution of the protoceratops’ frills.

‘In many fossil animals we have unusual structures and traits which aren’t really seen in living animals today,’ said Dr Andrew Knapp, a postdoctoral researcher at the Natural History Museum. 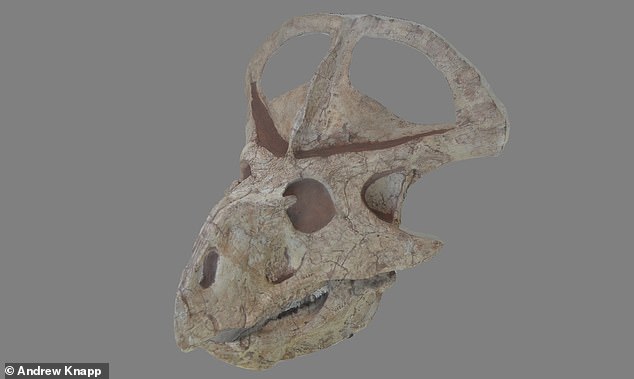 Protoceratops skull scan. Researchers 3D scanned 30 complete skulls of Protoceratops, which makes this the largest complete set of 3D data for any one dinosaur

GET TO KNOW THE PROTOCERATOPS

When it lived: Late Cretaceous – 74-70 million years ago

‘Protoceratops didn’t have any horns but they still had a huge frill.’

Several theories have previously been suggested for the emergence of these neck frills.

‘Some have suggested that they were used for protection, others that they played a role in cooling the large herbivores down, or that they allowed individuals to recognise different members of their own species,’ Dr Knapp said.

For their study, researchers 3D-scanned 30 complete skulls of Protoceratops, ranging in size from tiny day-old hatchlings to fully grown adults, giving him a full growth series of the species.

This allowed them to compare not only how different regions of the skull vary, but also how the skull changed in shape as the animal grew.

From this, it was possible to see if there were any indications that the shapes of the frills were a result of sexual selection.

When the allometry is positive – in that they show a much greater rate of change in growth when compared to other traits on the animals – it is almost always a sexually selected feature, such as the antlers of a deer. 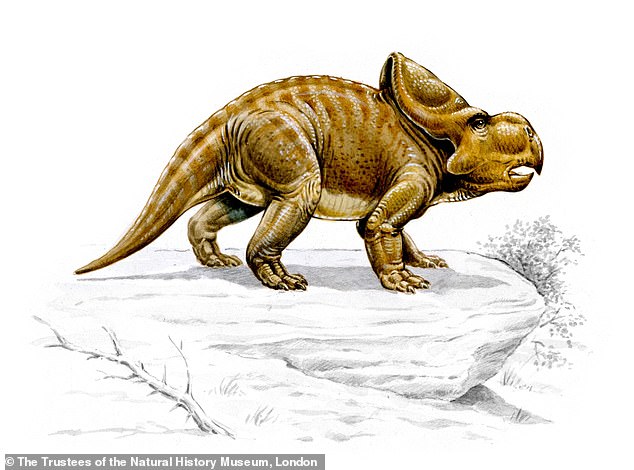 Protoceratops (pictured in artist’s impression) was characterised by a bony frill on the back of the skull and a unique upper beak bone, called a rostral

WHAT WERE THE CERATOPSIANS?

Ceratopsians were a group of dinosaurs that lived during the Cretaceous Period (from about 145 million to 66 million years ago).

They were herbivores with parrot-like beaks, bony frills and, in many cases, horns.

About the size of a large sheep, Protoceratops is a fairly common and well-studied species of Ceratopsian.

Other Ceratopsians include Triceratops, Styracosaurus, and Centrosaurus.

When looking at the frills of Protoceratops, researchers found that the growth patterns matched this, indicating that the frills were likely sexually selected.

Sexual selection can help explain the existence of features that may not help the animal survive but instead are favoured by the opposite sex, and so persist throughout the evolutionary record.

This often leads to difference in the appearance of males and females of the same species – a condition known as sexual dimorphism, and something that still exists in species today.

‘Sexual selection is a bit more complex than the bigger the male trait the more successful it is,’ Dr Knapp said.

‘While there are quite a few examples in living animals where usually females select males based on the size of their tail feathers or calls, it is quite often overlooked that males do the same thing with females as well. 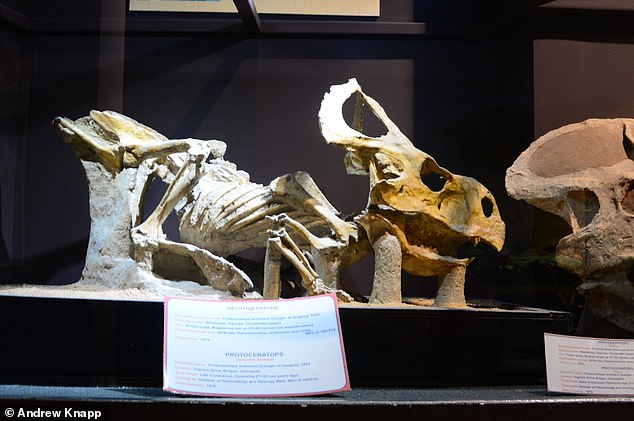 Protoceratops on display. About the size of a large sheep, Protoceratops is a fairly common and well-studied species of Ceratopsian dinosaur that would have lived in what is now Mongolia’s Gobi Desert 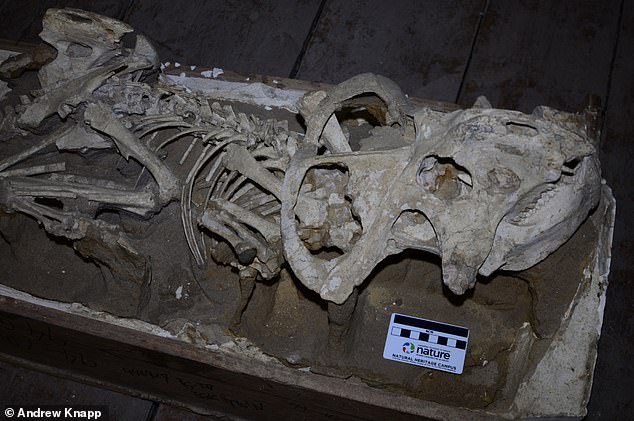 Protoceratops remains. Dr Andrew Knapp, a postdoctoral researcher at the Natural History Museum, has been applying modern technology and analysis to the skulls of Protoceratops

WHAT IS SEXUAL DIMORPHISM?

Some animals show high levels of sexual dimorphism – meaning they show big differences in their physical characteristics aside from their sexual organs – partly to attract mates.

For example, in peacocks, males are normally brightly-coloured with large lustrous tail feathers, compared with the female, which has more subdued colouration.

Other examples of sexual dimorphism include antlers that are largely only found in male deer and the striking mane of the male lion.

Today, both male and females of the crested auklet, a species of bird, have an impressive plume of feathers curling from the tops of their heads used by each sex to signal their health.

‘So while the plume of feathers is a sexually selected trait, it has not lead to sexual dimorphism,’ Dr Knapp said.

Similarly, evidence from the Protoceratops fossils suggested sexual selection appeared to be in action, but there appeared to be no obvious sexual dimorphism.

‘There almost certainly were differences between males and females but quite often differences are in body size, so males will be bigger than females or vice versa,’ Dr Knapp said.

‘It could also have been through something else like colouration, which doesn’t preserve in fossils.’

The team agreed that frills of dinosaurs like Ceratopsians were likely down to sexual selection.

Despite this, there is no way to definitively prove that individuals of extinct species with particular traits that were attractive to the opposite sex were more successful and had more offspring.

For this reason they concluded that the frills were the result of the more general ‘socio-sexual selection’ – a term that includes other social behaviour associated with such intricate ornaments, such as defending food or territory. 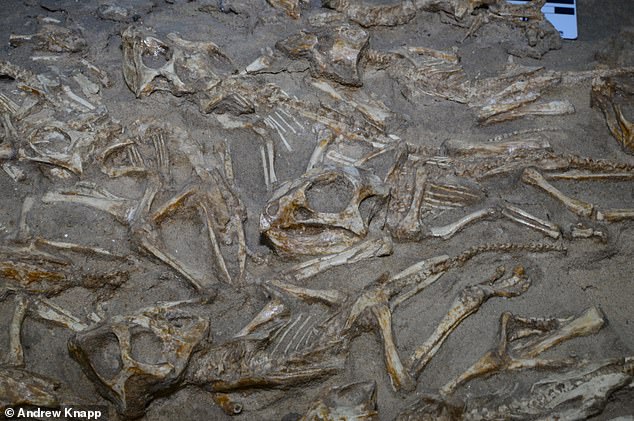 More Protoceratops remains. The new study has been published in the journal Proceedings B 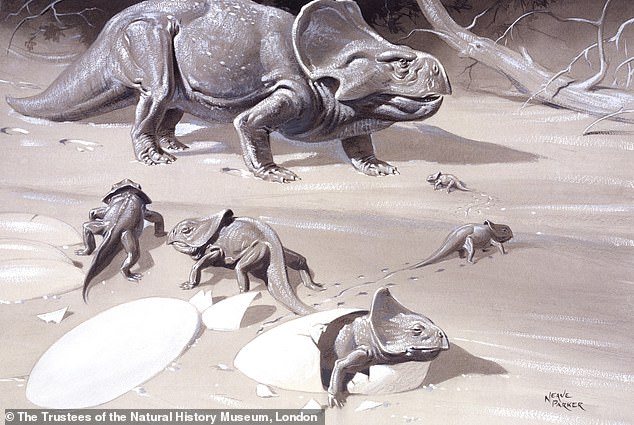 Dr Knapp was previously lead author of a 2016 study of Protoceratops’ distinctive features, which authors reported may have been used to attract the opposite sex’s attention.

According to Dr Knapp, this new research, published today in the journal Proceedings B, builds upon this previous study ‘in a number of ways’.

‘Firstly, we look at three-dimensional shape rather than the simpler linear measurements used in the previous paper – this lets us analyse growth in much more detail,’ he told MailOnline.

‘Secondly, we apply our analyses across the entire skull rather than focus on a single region.

‘By doing this we can make sure that the effects we see in the frill aren’t shared across other regions of the skull.

‘Finally, we’ve included more specimens in our analysis than the previous study so we can be more certain of the results.’