PSG manager Thomas Tuchel believes his team have come a long way compared to last year in the Champions League.

A brace from Angel Di Maria helped them stun Real Madrid 3-0 at Parc des Princes in Group A of this season’s tournament.

Thomas Meunier added a third in stoppage time, after linking up with fellow full-back Juan Bernet, and Tuchel hailed the effort of his side. 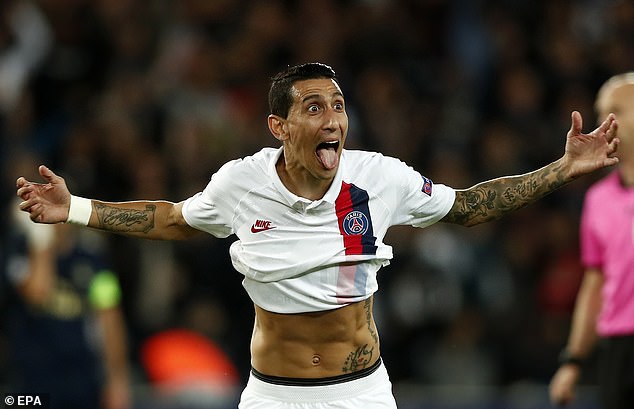 Last season, PSG topped a group containing Liverpool, but were knocked out in the round of 16 in dramatic fashion by Manchester United, who scored a late penalty awarded by VAR.

Tuchel told Viasport: ‘It was a great team performance and this for me is the biggest thing – we were the better team and we won deservedly.

‘Everyone worked together, we never lost the structure and we attacked brave. We had good possession and all together it was a very complete team effort and team performance and this makes the coach most happy.’

The display from PSG was all the more impressive considering Neymar, Kylian Mbappe and Edinson Cavani were all unavailable.

‘We are still working,’ Tuchel said. ‘We have to say we have come a long way from last season when we played the first game in Liverpool and the second from last group game we were at home to Liverpool and you could see we could do it. 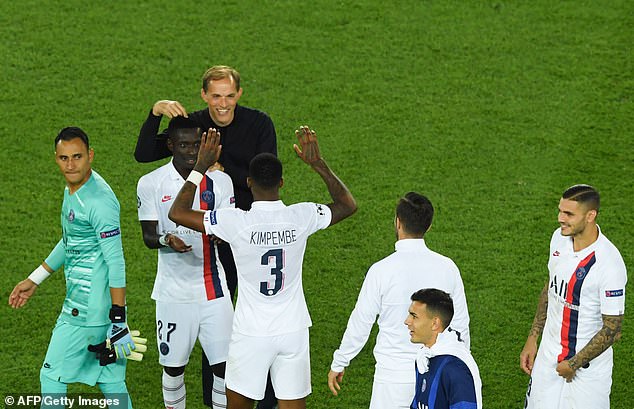 Tuchel praised his side’s bravery, structure and attacking play after the match

‘After the defeat against Manchester United it was tough for everybody at the club and also for the players. Now we have some fresh blood and some players who give us real intensity and also personality.

‘We feel we can handle big losses, there is no question we miss Kylian, Neymar and Eddie, but still we had a strong team who were ready to play at a high level. It’s a continuation of a process and we have to hang in there.’

Madrid goalkeeper Thibaut Courtois was powerless to stopping Di Maria enjoy a night to remember against his old club.

He scored in the 14th minute with a fierce strike from eight yards, after Bernet’s pass before he controlled the excellent Idrissa Gueye’s square ball and curled home with 33 on the clock.

On Di Maria, Courtois added: ‘He has a lot of quality and both his first and second goals he had a great shot.

‘The first goal he shot really strongly at the front post and I didn’t have time to put my arm against it and the second was a great shot just outside the 18. 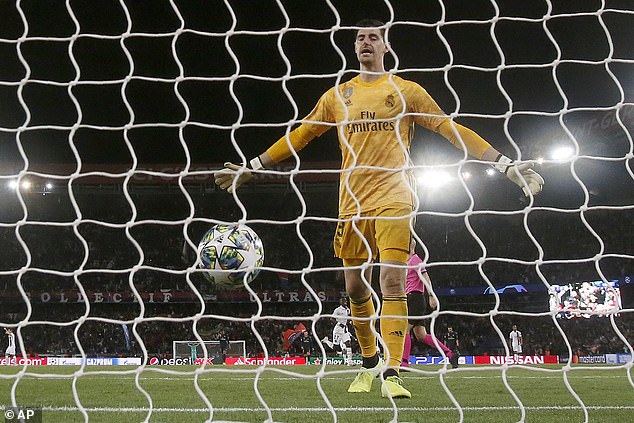 ‘A guy with his talent, we have to maybe be a bit closer to the ball, but that is football. I think he had a good game, but I’d prefer to analyse our game rather than focus on others.’

Within two minutes of Di Maria’s second, Madrid thought they had reduced the deficit when Gareth Bale lobbed Keylor Navas.

But VAR ruled the Welshman had handled the ball in the lead-up to the strike and Zinedine Zidane’s team failed to manage a single shot on target in Paris.

‘I think from the start PSG had more intensity than us and in games like this, in the Champions League, it’s hard,’ Courtois said.

‘We found it hard to defend and to attack them as well. I don’t think we created one shot on target. Two shots were cancelled after, so it’s a hard night, but we need to analyse and think about what we could have done better.’