It was mocked, it was ridiculed — and it was completely sold out in a matter of hours.

When Hormel announced in August that it was bringing pumpkin spice-flavored Spam to customers this fall, the idea drew more than a few skeptics — but apparently, it also caused a lot of people to draw their credit cards.

After the product went on sale on Spam.com and Walmart.com on Monday, September 23, the brand’s official Instagram announced within hours that it was totally gone. 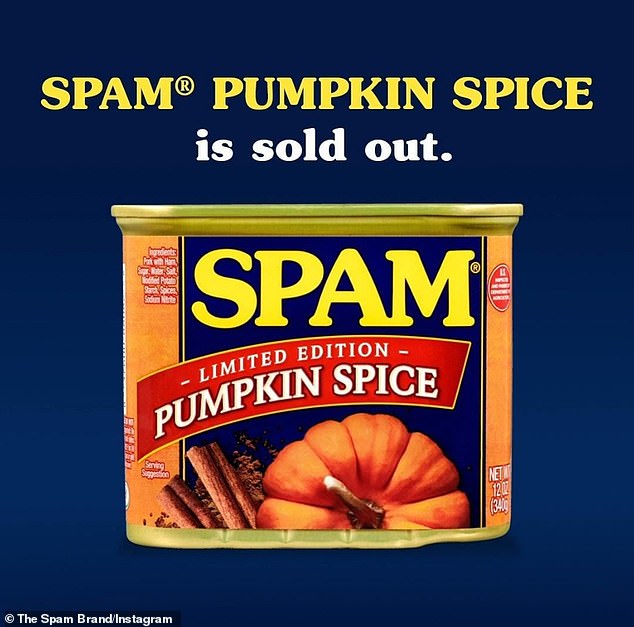 Going, going, gone! It went on sale on September 23 and sold out that same day

‘Fry it up with waffles, hash or eggs to make the perfect breakfast or brunch pairing. You’ll be so in love with this flavor, you might start calling it pumpkin.’

The product idea was a controversial one, but it’s clear there are plenty of fans out there.

‘Turns out it was pretty popular,’ the brand wrote on Instagram, announcing that the $8.98 two-packs had sold out.

‘What are you cooking up with your SPAM Pumpkin Spice? If you didn’t get your hands on any, we have 15 other flavorful varieties you can enjoy. And maybe someone will be generous enough to share their 2-pack with you.’

Several commenters are crushes that they didn’t manage to buy any before it sold out.

‘Please bring it back! I missed it!’ wrote one.

Try it? Hormel recommends it in several recipes, including grilled cheese, waffles, and a fall vegetable hash

‘Will you PLEASE do another run of it? Sounds like a lot of people missed out,’ said another.

Those who managed to get some were celebrating.

‘I got 8 cans!! Can’t wait to regret it,’ wrote one, while another chimed in: ‘THANK GOD I ordered early!’ 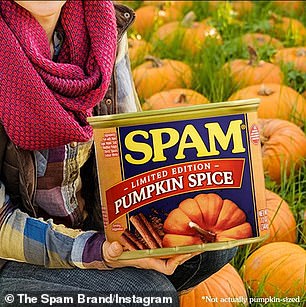 Some who managed to snap them up are even re-selling them on eBay for $25 per pack.

Editors at the Daily Meal managed to try the new variety of the canned pork product first introduced during the Great Depression, and they agreed that it’s not terrible.

‘Although this is one of the more peculiar pumpkin spice products on the market, surprisingly, the general consensus was that the flavor really wasn’t bad,’ they said.

‘It certainly had that soft texture that anyone who’s had Spam will be familiar with, as well as the expected salty, porky Spam flavor.  Cinnamon, clove, allspice and nutmeg shared center stage with the rich and savory Spam flavor, however, along with a hint of sweetness.’

The tasters thought it would go well with eggs, waffles, and other breakfast foods. 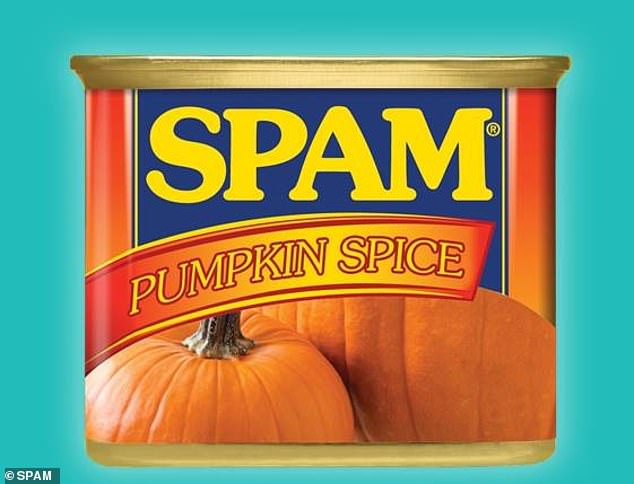 Real deal! It may very well sound like a spoof product, particularly because Hormel did, in fact, joke about selling it in October 2017

In fact, Hormel recommends it in several recipes, including grilled cheese, waffles, and a fall vegetable hash.

Still, pumpkin spice Spam may very well sound like a spoof product, particularly because Hormel did, in fact, joke about selling it in October 2017.

At the time, the brand shared a mock-up a container on Facebook and captioned it, ‘Just in time for fall — SPAM® Pumpkin Spice! Ok, it might not be real, but you can still put it on your holiday wishlist! Would you?’

But while they may have expected horrified reactions, several of the commenters indicated that they’d be willing to try it.

‘I wanted to be upset, but honestly it might come out like a festive ham kind of,’ wrote one.

‘It might actually be kinda good,’ said another, while a third commented: ‘It’s just cinnamon and nutmeg. Might not be all that bad.’