A plane was forced to make an unscheduled stop en-route from Dubai to Amsterdam after a punch-up broke out when a passenger allegedly refused to stop breaking wind.

The Transavia Airlines HV6902 service made the unplanned stop-off in Vienna after two men objected when a fellow traveller began breaking wind loudly.

And when he allegedly refused to stop a fight then broke out – forcing the crew to intervene.

The pilot of the Dutch low-cost airline then made the decision to divert the plane to the Austrian airport.

On landing, police then boarded the aircraft after reports about ‘passengers on the rampage’ and four people were removed from the flight.

A police spokesman confirmed that the incident centred around a passenger suffering from wind who was not attempting to restrain himself, which offended two Dutch men on the flight. It’s not clear whether the man accused of breaking wind had a medical condition that caused it.

Police escorted two Dutchmen from the flight – though it has not been confirmed which two – and two young women, identified as Nora L, 25, because of local privacy laws, and her unnamed sister, both from Rotterdam.

The young women complained to local media that their removal had been unfair.

Nora L said: ‘It was crazy that we were included, we had no idea who these boys were, we just had the bad luck to be in the same row and we didn’t do anything.’ 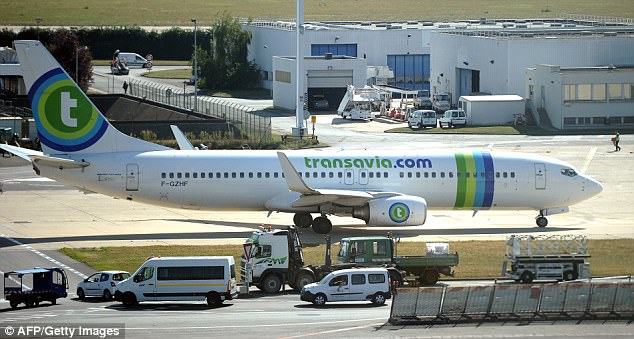 After the incident a video of the passengers being removed was posted online on social media.

A spokesman for Transavia Airlines later told local media that the four people had now received a ban from any further travels.

They added that in order to complete their journey they needed to find another airline to take them to Amsterdam.

However none of those removed from the aircraft were arrested because they had not broken any Austrian laws.