Pupils as young as FOUR taking knives to school

Children as young as four are being caught armed with knives and other weapons at school.

Research has revealed a 42 per cent surge in the number of pupils found with bladed weapons and other lethal items in the past two academic years.

Since the 2012-13 school year, a total of 2,405 children have been found with a knife in the classroom or playground.

Last month the Mail told how knife crime among youngsters had risen to an eight-year high. Courts dealt with 4,439 knife possession cases involving ten- to 17-year-olds in the year to September – the most since 2009.

Children as young as four are being caught armed with knives and other weapons at school, as research revealed a surge in the number of pupils found with bladed weapons

And in a chilling development, an investigation found children were creating weapons at home – including prison-style ‘shanks’ made by fixing razor blades into felt-tip pens and markers.

Pupils have even turned supposedly harmless school equipment such as paper clips and geometry sets into weapons.

Other items seized from pupils include foot-long carving knives, home-made Tasers, smoke grenades, stun guns and an array of firearms including air rifles. Cases reportedly include a four-year-old found with a knife in Northamptonshire, a primary school pupil threatening a teacher with a pair of scissors in London and a school worker in Wales suffering from post-traumatic stress after being threatened with a knife.

In Rotherham, South Yorkshire, one boy was found to have taken a knife into school every day for months to protect himself from other pupils.

Details of the rise in the number of blades being used at schools in Britain comes after official figures released last week showed a 21 per cent increase in knife crime in the year to September.

It has prompted calls for greater use of stop and search tactics and a crackdown on social media websites that promote gang violence.

Solicitor General Robert Buckland said: ‘These are frightening statistics. The message still has to get through to young people that carrying a knife for your own protection is probably the most dangerous thing you can do.’ 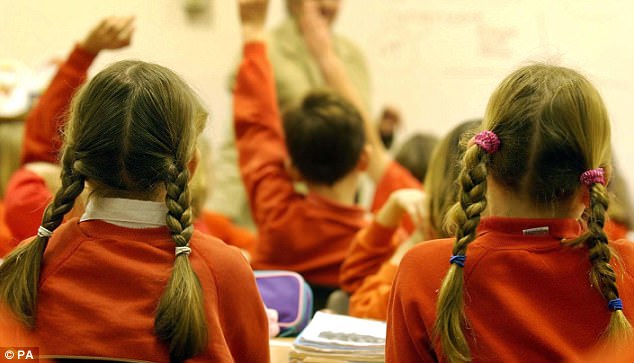 Since the 2012-13 school year, a total of 2,405 children have been found with a knife in the classroom or playground

Labour MP Sarah Jones, chairman of the All Party Parliamentary Group on Knife Crime, said: ‘My fear is that a generation of young people are growing up desensitised to violence.’

Patrick Green, of anti-knife crime charity The Ben Kinsella Trust, said: ‘These figures are frightening and what is of greater concern is that they don’t show the full extent of the problem.’

Home Secretary Amber Rudd has launched a consultation on new laws to crack down on knife crime. She has proposed banning online knife sales to under-18s by making it illegal to deliver them to homes and requiring proof of age at collection points.

Measures would also include an offence of having a knife or blade in educational institutions other than schools.

Ministers have acted following a series of knife attacks in schools, including the deaths of teacher Ann Maguire at a college in Leeds in 2014 and student Bailey Gwynne, 16, at a school in Aberdeen in 2015.